How many of us can say we've had a global Netflix hit? Or that in the same year, we also dropped two new singles. When fame comes a-knocking, it enters all at once and with lightning speed. At least, for Ayesha Madon this is true. A breakout star of Australia's beloved Heartbreak High reboot and with freshly shucked songs, Fish & Chips and Goldfish, to her name, it's no surprise the actor-cum-musician was invited to present alongside Ruel at the 2022 ARIA Awards – her first, and as Madon says, "hopefully not my last".

Wearing Versace and iced-out in Bulgari, Ayesha Madon shares her photo diary from the night with RUSSH, breaking down everything from her look to red carpet nerves and the surreal-feeling of fame.

Tell me about your outfit, what mood were you going for and how did it make you feel?

My high school best friend Victoria Knowles is my stylist, so she knows me sometimes better than I know myself which I feel is always reflected in what she dresses me in. We wanted to go for something fun and colourful and we both had audible reactions when we saw the Versace look for the first time. And if that wasn’t enough, the Bulgari jewels made me feel way more important than I am, which is always a nice feeling. 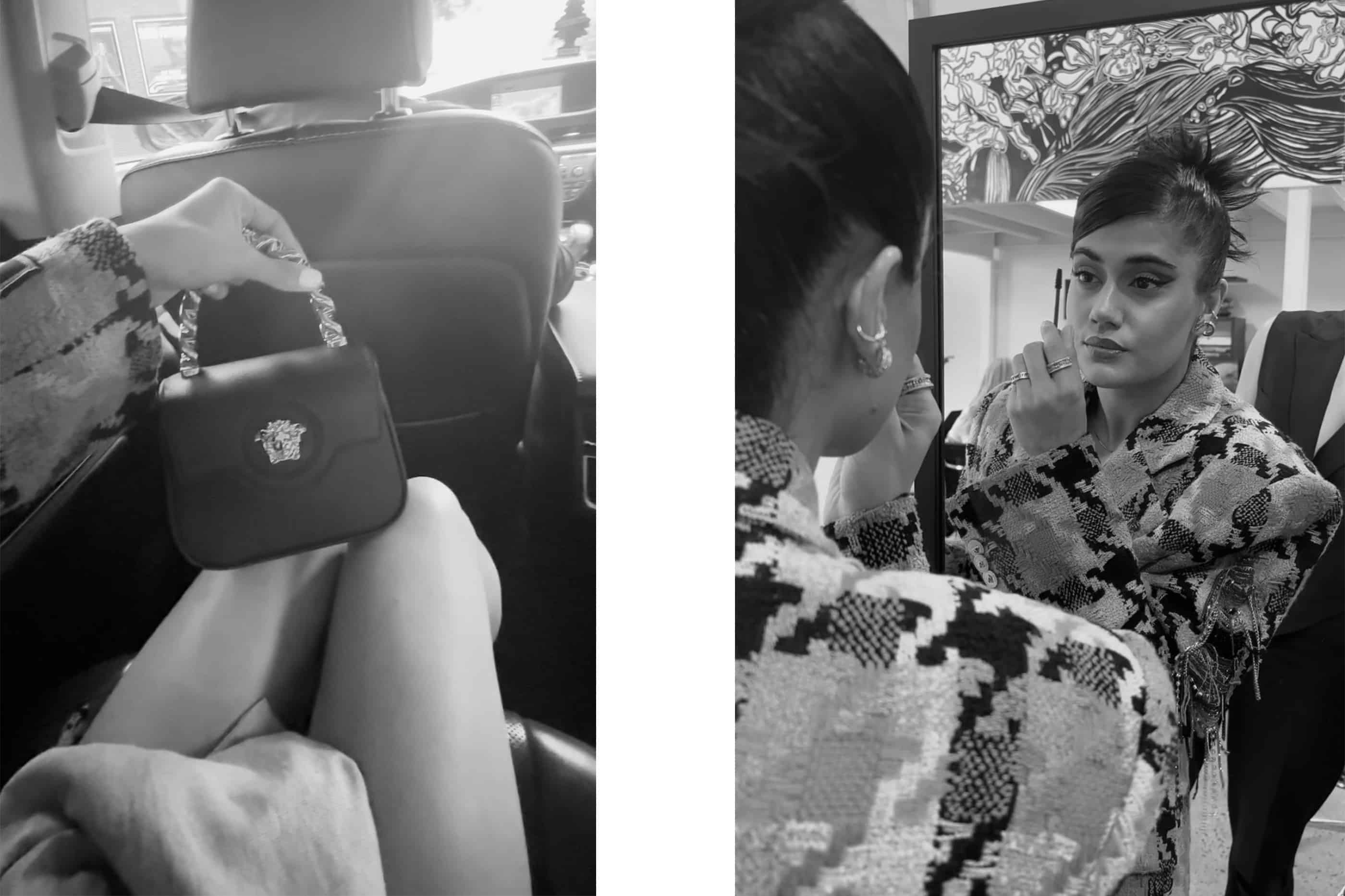 What was in your handbag? Any essentials you carry with you to these big events?

I’ve been really into lip combos so I had my lip liner and lip gloss, some tampons, a rum-scented perfume, panadol, gum, my ID and my debit card. The most stereotypical female bag ever but yeah… the essentials.

What was going through your head as you walked the red carpet?

Well all of this is quite new to me, so it’s still surreal that people know who I am or perceive me at all lol. It still feels somewhat comical to me when people ask to take my photo because I’m a walking meme so I would say the overarching feelings were confusion and gratitude. 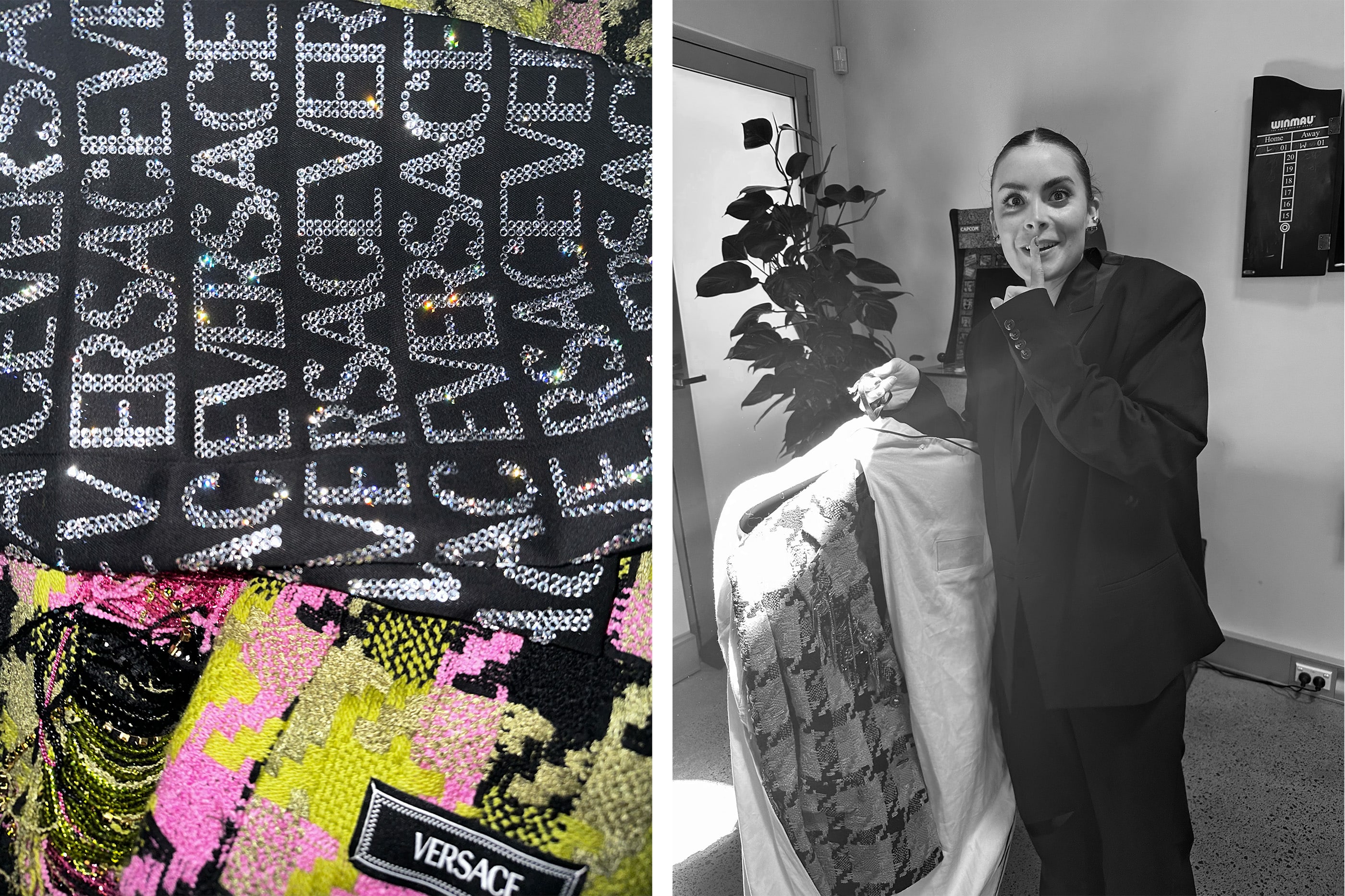 Do you have any highlights from the night? Any interactions, "pinch-me" moments, or funny observations?

Many pinch me moments, including Anthony from the Wiggles knowing who I am. Presenting at an event I’ve watched on TV my whole life was weird and cool too. A funny observation would be I guess, that everyone looks like they know what they’re doing way more from the outside/from the telly but when you’re amongst it, it’s definitely more apparent that everyone has mild to severe imposter syndrome. It’s actually quite nice and human.

What was it like being asked to present, were you nervous?

It sounds cliche but it was such a massive honour and a big personal milestone to be asked to present amongst so many artists I look up to. I’m always a little nervous, but I come from a theatre background (don’t tell anyone) so I’m used to working on the fly a little.

You've had a huge year, both with Heartbreak High becoming a global hit and the release of brand new music, what's it like being recognised by the music industry so early on in your career?

I feel incomprehensibly filled with gratitude. So lame. But as an artist you just never know how things are going to unfold and that uncertainty can be so crippling. It definitely is and was for me, so to have made it this far feels like a warm hug to past Ayesha.

So what's the verdict... did you have fun?

Full disclosure, I usually hate going to events because I’m a serial home-body but I actually had SO much fun at the ARIAs. Free chippies, good company and stellar performances. It was my first one but hopefully not my last.