Alexander McQueen remains one of the most important designers of our time. A true revolutionary that left a radical legacy, his sudden passing in 2010 left the world in shock as one of the most legendary visionaries of our generation left the world. Although accomplishing an epic contribution to fashion, it was at the cost of his life. Now, over a decade after his passing, the Los Angeles County Museum of Art (LACMA), in partnership with the National Gallery of Victoria (NGV) have opened Alexander McQueen: Mind, Mythos, Muse; the first major Australian exhibition to explore the work of this boundary-pushing fashion designer.

NGV curator Danielle Whitfield shared with RUSSH, "This exhibition is so unlike his previous shows that were so about his work because it looks at McQueen the designer and as an artist. We (NGV) wanted to highlight just how visionary McQueen was technically and conceptually, how he was such a phenomenal storyteller and that his work was about dealing with those big life questions as artists do. Themes of suffering, persecution and life and death, beauty and decay – all of those."

"A visionary whose work and collections were about extraordinary and wide-ranging references across time and geography in media, and we (NGV) are about putting art and fashion in dialogue, so we see where the ideas are coming from and where Mcqueen distils and instals them into his work in a poignant narrative," Whitfield continued.

RUSSH's fashion director Charlotte Agnew sat down with NGV curator Danielle Whitfield and designer Catherine Brickhill who personally worked with McQueen for six years to capture an inward perspective into the details behind McQueen’s making.

Catherine Brickhill: The way he created was so instinctive due to his photographic memory, it was informed instinct, he was an encyclopaedia of fashion geography. 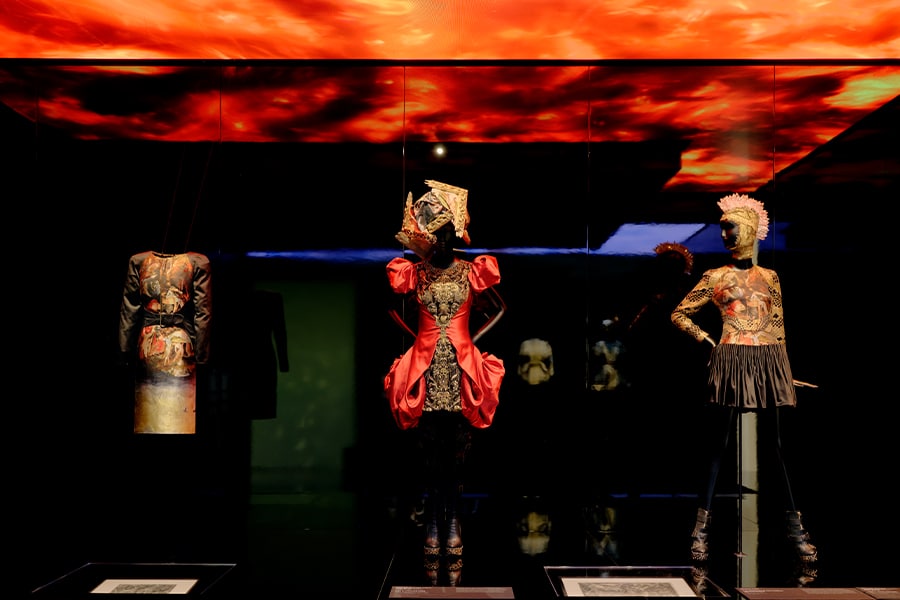 CB: I think Galliano still works like that but with the changes in technology and the development of the internet, fashion works very differently now. Everything has to be very careful and curated and then created with caution.

Risk is still important though?

CB: Yes, but there is less risk due to advertising budgets and social media.

If McQueen were still alive and making today with where the internet is at, how do you think he would work?

CB: He would be one step ahead because I think he always was.

It is interesting to think how he would create around all of these new limitations now.

CB: Or maybe he wouldn’t be in fashion. Maybe he wouldn’t be excited by fashion anymore and moved onto film or something else. He was always interested in the spectacle and performance, so film would feel like a natural progression.

CB: I worked with him for almost six years, it was a very intense experience. We were constantly working and it was a very crazy intense time. Working in Paris with these incredible artisans, flowermakers, feather workers – just the richness of that time, was mind blowing. There were real highs and low lows, because the pressure was so extraordinary on him and the pressure on us as a team to make his ideas a reality. He obviously had a real human side as well, we were all part of his family and his support – it was never just a job.

What is something you learnt from McQueen’s way of creating that continues to lead creative decisions of your own?

CB: In many ways, I was definitely informed by McQueen’s practices. Sometimes I think that’s why I’m here, I need to get back to that way of thinking that I was thinking then. Every time I go into a fitting, I think of the way McQueen would approach a fitting. 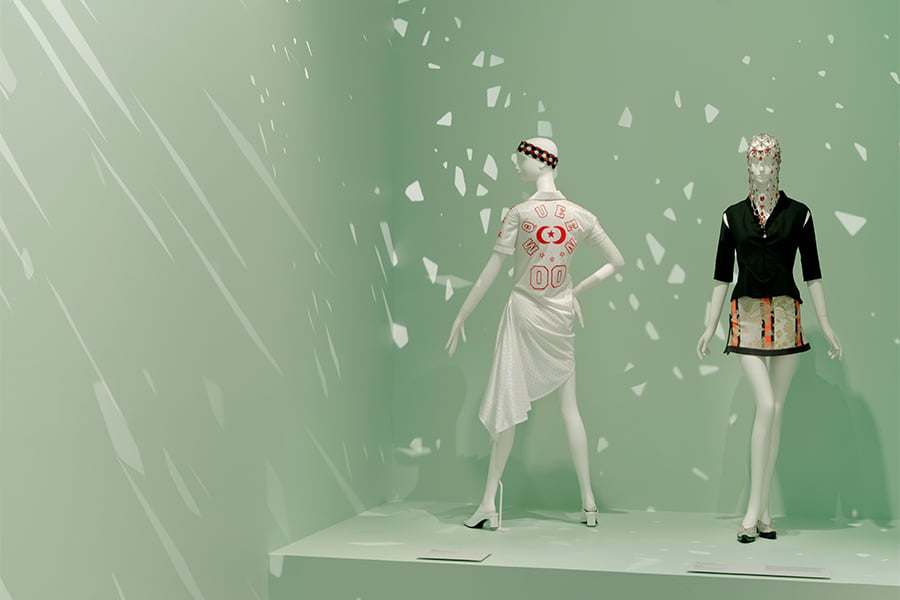 As a stylist, I love hearing this process.

CB: It could be different things. It could be incredibly intense. It could also be joyous, lighthearted and him having a laugh. It could be an incredible performance because he would just go right at it – we ( his team) wouldn’t know what he was doing, it was like watching someone who knows origami where you’re not quite sure what’s going to happen at the end, but if you tried to do it, it would never turn out quite the same.

His technical understanding and ability in construction along with his vision and fearlessness along with his confidence to do it was key to Mcqueen’s practice.

It is inspiring for someone to know what he was going to say every single time and follow his ideas right to the end.

CB: He didn’t always start off like that, sometimes he would need to find what it was he was wanting to say with a lot of fumbling around. It would happen regularly because he would be finishing a collection and then immediately starting on a new one.

How would he start that process of developing a new collection?

CB: Sometimes he would have a formed idea or sometimes he would just be lost and would say “go and do this” or “go and look at that." Almost every collection he would say go and look at Katherine Hepburn because she was such a strong woman with both a feminine and masculine side, beautiful but full of self conflict – I think it was something about the tailoring on her that inspired him. My job was to also bring inspiration and to try to help ignite a spark and for some collections it would take a while to find that spark. 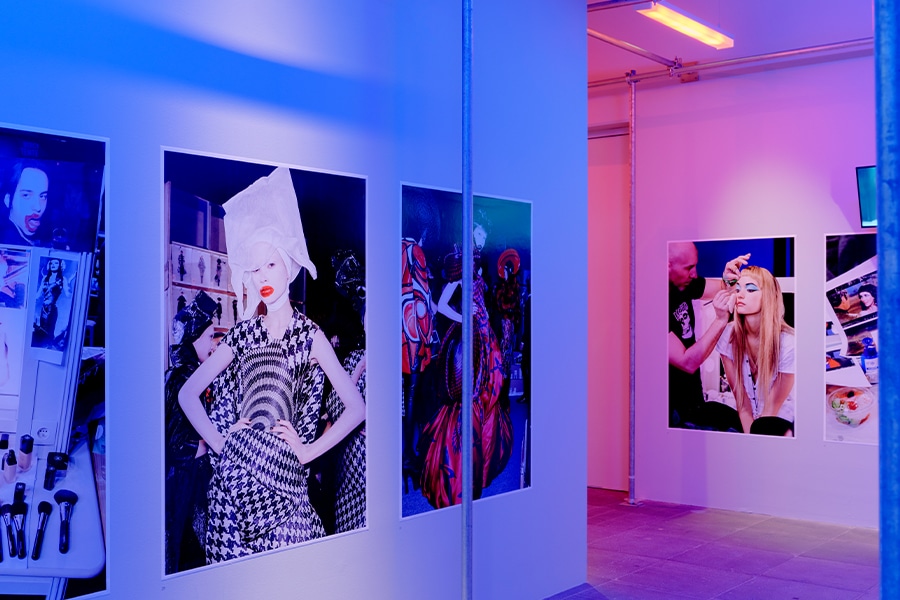 I understand also as someone who needs to consistently create stories, the importance of individually needing to define your understanding of the final idea the whole way to the end to be able to communicate to your team what it is everyone needs to be saying with their own thoughts.

CB: Yes exactly and that’s not a natural thing you know, we are human we are not robots.

But you kind of need to live robotically to be able to do that?

CB: Yes, yes you do, you don’t often get the time to take any perspective and I don’t think he understood the consequences of that pressure. Although he was quite open with communicating what he was feeling with the pressure, there wasn’t really a system in place to help yourself deal with mental health.

Do you think we function better now as an industry towards mental health?

CB: Yes we do, people are becoming a lot more aware that you can’t just keep pushing people.

What is your most valued experience you took away from McQueen?

CB: I think probably never accepting no as an answer which makes me think of the night before a show. We had just done Paris and were now in London and I remember him asking me to create a ball gown in 24 hours for the show the following day. That would normally take 10 days of work so it really was basically asking the impossible. So, I think realising your own limitations can be completely blown away, is what I took most away from him. The most important lesson is don't listen to what you think you can do but what you think you can’t.

You can really do anything. 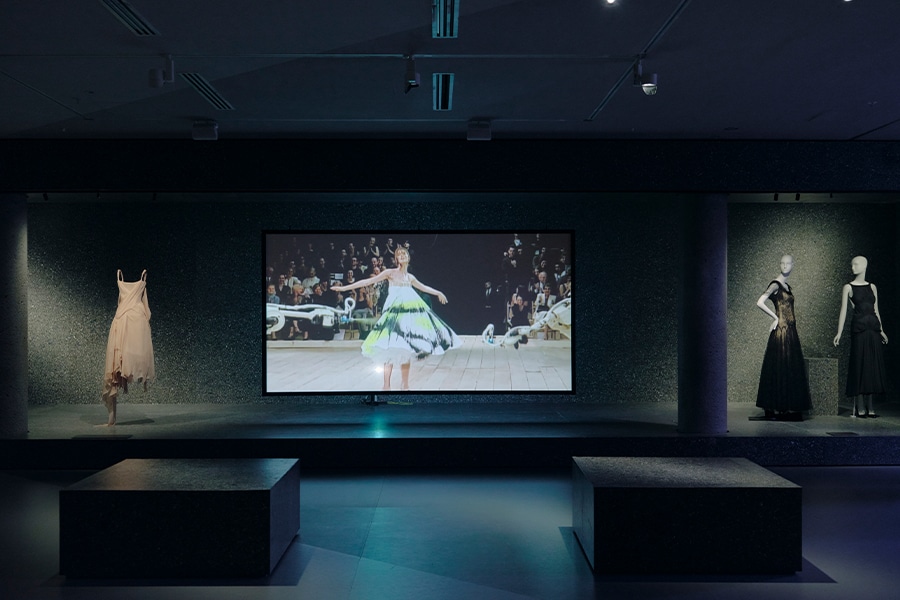 How does the NGV curation of his life distinguish the brave storytelling in his work?

DW: This exhibition is so unlike his previous shows that were so about his work because it looks at McQueen the designer as an artist. A visionary whose work and collections were about extraordinary and wide-ranging references across time and geography in media, and we are about putting art and fashion in dialogue, so we see where the ideas are coming from and where McQueen distils and instals them into his work in a poignant narrative. Sometimes this narrative is deeply personal or subversive or provocative or completely emotional so the perspective we want to communicate is how he was such an incredible storyteller. It’s also about showing his amazing technical capabilities. McQeen left school at 16 and trained on Saville Row, he then went to work in the fashion industry and ended up at the haute couture atelier at Givenchy so it is about showing the craftsmanship as well.

I think he was extraordinarily brave and uncompromising and each collection was a vision, the way he saw his work wasn’t just about the garments and the collection, it was about how it was presented on the runway. He took experiences from his own life to tell stories that empower women – looking at episodes of history or Hollywood film and layering all these references into his work to really communicate something beautiful and powerful.”

What surprised you about McQueen when educating yourself on his life?

DW: Even though I was familiar with certain collections and certain works, I think I hadn’t understood how layered the references were in his collections and how sophisticated and refined his knowledge was. One moment he is in the Renaissance, the next he’s in 1960s Hollywood then he’s in 18th century Scotland or looking at a 16th century doublet, it was just phenomenal how his mind worked and his imagination. 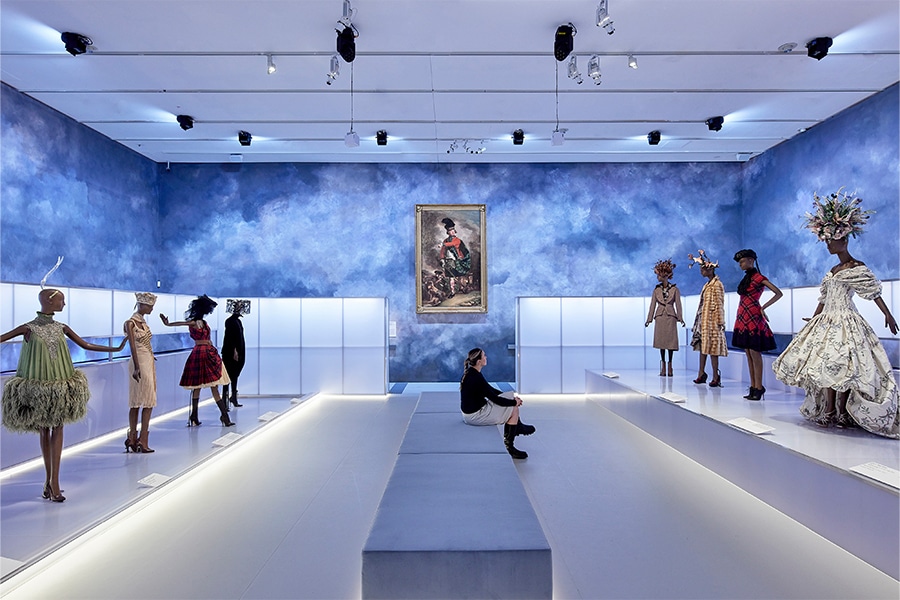 Why in your opinion will McQueen’s work continue to inspire young creatives and designers?

DW: I think because he changed the way we looked at fashion, because his collections really spoke to extraordinary universal themes that made them very powerful. Also his innovations such as the bumster trouser of early 1990s. He contributed silhouettes to fashion that hadn’t existed before which changed the way we looked at the body. McQueen was really unique due to his holistic nature of his vision and putting so much of himself into his work.

He was also so generous, as shared by the jewellers, milliners and his many collaborators he worked with who we spoke to. The way he would identify somebody who would have that same creative approach who would be entrusted to be given his idea and be able to contribute something to it was incredible and it wasn’t hierarchical. Everyone that worked with him spoke of that generosity and how that encourages people to do the best work.

He never stopped pushing boundaries ever and he looked at the world around him and looked at our place in it. He always said fashion is just the medium, it was a way of communicating outwards about the issues that surrounded him and what he thought about them.

What will those that know nothing about McQueen take away from the exhibition?

You can’t not be blown away by the strength of his work with the materiality or silhouettes, cut or references, it's such a multifaceted vision of what fashion could be and I hope people walk away feeling very inspired and encouraged. It’s not always easy and it's about pushing yourself to be the best creatively. He will be remembered forever for his extraordinary contribution to fashion.

Tickets to the spectacular Alexander McQueen: Mind, Mythos, Muse can be purchased on the NGV website. The exhibition will run from 11 December 2022-16 April 2023. 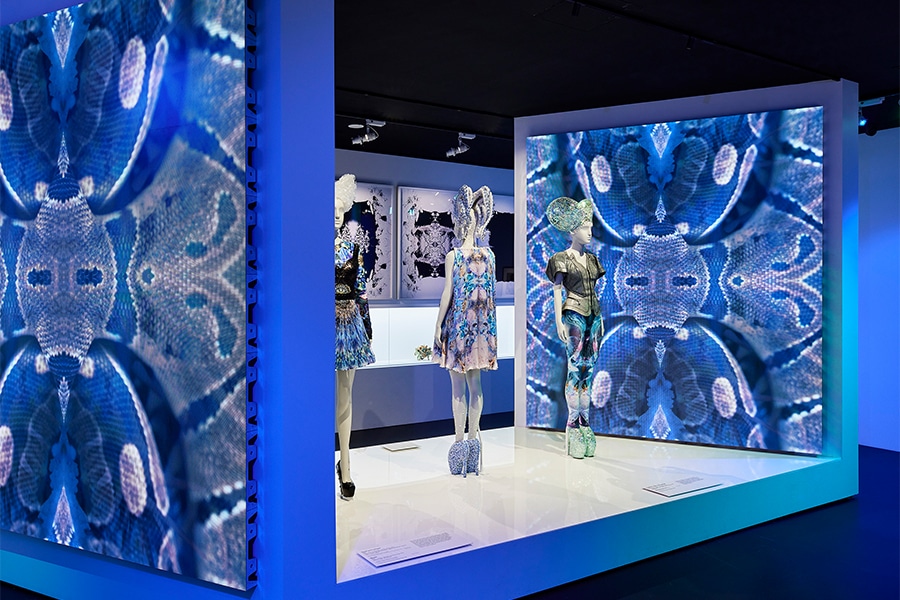