It’s been a long-time between Paris ready-to-wear weeks for me (thank you to babies and a pandemic) and I felt sure I was entering into this SS23 season with wide eyes and an open mind. I’d go so far to say I was deeply anticipating a new perspective on the mood of fashion from being back in the conversation rather than observing through the small rectangle shape of my phone, close to sixteen thousand kilometres away. A past life of doing this across an entire month, twice a year, means I have full comprehension that there’s no better way to understand the energy around the collections than by talking to other editors and writers who have witnessed it first-hand (you won’t find a swifter hotline than fashion’s front row) along with the often-gossiped stories from models and creatives who walked or worked backstage on the productions.

Now, back at my hotel after the Louis Vuitton finale, typing away in my ‘bed-office’ that I have barely slept in all week – I’m acutely aware I have a lot to unpack, and almost grateful of the long-haul flight home in which to do it. Paris Fashion Week has evolved. Most immediately evident from day 1 at Dior was that it has undoubtedly upsized: everything being bigger and more. From the celebrity to civilian ratio; the size of the sets and show spaces themselves, the queues of fans spectating outside, the number of looks, the photographer pits, the street-style stars, performative influencers, the screams for Cher and Erykah Badu, the security lines, the distance between show locations and waiting in traffic. Everything feels more, more, more. And to think there was all that talk of sustainability and scaling back?

We ‘the media’ of course are leading this charge as we slave to the same algorithms; producing identical content in a bid to retain relevance and generate clicks because we are led to believe our survival depends on it. Whether or not this narrative sits at the core of our intent or vision seems not to matter. We are shooting messy videos for reels and engaging with digital dissonance. Fashion has long been political and cultural; but at this new hyper-pace, it can’t help but feel slightly over-subscribed, with the machine moving so fast we are left with little time than we should have to consider, evaluate and contemplate the collections; the real reason most of us all ended up here.

Day 1 began with Maria Grazia Chiuri’s riff on Italian noblewoman turned French royalty, Catherine de Medici, that translated into delicate lace Pannier silhouette dresses, guêpière lingerie and bloomers as outerwear along with ancestral raffia embroidery accented by fishnets and a platform shoe (which Medici introduced to the French court). While there was not a bar jacket in sight, if we can count on anyone to respond to the patriarchy trying to turn back the clock it’s Chiuri and her commitment to feminine power. Even down to the, ever liberating, perfect pair of blue jeans. It was also a joy to see model Abény Nhial cast for this runway.

Later in the evening in the basin of the Trocadero, with the Eiffel Tower as the background, Saint Laurent showed a very cohesive consort of long jersey tube dresses and strong shouldered, floor sweeping coats, many with hoods, which Vaccarello drew in surprising soft jewel tones of purples and olives. Citing Madonna and Martha Graham as inspirations, it was still power dressing but in a more subtle way that nods to old world Yves Saint Laurent glamour. I want to be his woman – languid in silks and butter soft leather – out for a midnight stroll with my Dalmatian and dark glasses at night.

Wednesday in Paris belonged to The Row as Mary Kate and Ashley Olsen quietly presented their daily wardrobe essentials with total intention and calm. It’s again one of those collections that inspires you to strip it back to absolute basics but with an obsession for fabrication and cut. An everlasting black sheath dress, a white suit, a voluminous evening gown, sharp shirting, ….and so it goes on. What felt fresh and against the grain of the severe minimalism in this collection were the more playful crochet pieces, sequinned on one occasion, and a fine leather thong. It all unfolded to the sound of Chris Isak’s Wicked Game.

Ludovic de Saint Sernin described his sexy display as a throwback, referencing both Britney Spears and Lindsay Lohan. I loved his leather activewear, the homage he played to Issey Miyake through a pleat-like fabric and the gladiator strong sequinned sheathing that feels fun and for the moment. The designer himself has main character energy that means I am always watching.

Likewise, Coperni delivered the new guard moment of the season as Bella Hadid was adorned with a white off-shoulder dress made for her in real time from instant spray-on fabric. It took less than 10 minutes to Instagram fame as McQueen was the thought that came to everyone’s mind. Interestingly, the non-woven fabric can apparently be washed and re-worn. Beyond the performative, there were some excellent looks; especially the high split silk dresses and cut away pants as worn expertly by Cat McNeil.

In a season of dark sets and end-of-the world soundtracks, the Loewe show set around a giant anthurium was a blast of light and brights. While the collection played with surrealism; a baby’s car seat as a tabard, exaggerated baroque dresses and balloons shaped into giant petals sitting atop stilettos, Jonathan Anderson’s woman was also more classically beautiful than ever. One can’t not love the wit here, the pronounced use of plastic and the pops of vibrant colours were offset by traditional silhouettes and some quite severe moments of restraint.

As the weekend arrived, in what was perhaps a little unexpected Nadège Vanhee-Cybulski staged a sunset rave for Hermes SS23, a presentation set against a big desert rock and to tracks by electro group System 7 and Belgian techno phenomenon Charlotte de Witte. The utilitarian details of the collection were inspired by glamping, with elevated plays on tent zippers and annexes. In the resee, it was the super light platform sandals and technical leathers that blew the mind. Exit 14 is everything I’ve ever thought a Hermes look to be.

The week took a dark turn again on Sunday as the morning began with a journey to Balenciaga on the outskirts of Paris to experience Demna’s metaphor for “digging for truth and being down to earth” which quite literally found us all deep in a mud pit. There can be no denying the magic of Balenciaga and Demna’s ability to do high-low like caviar on a McDonald’s hash brown. Amid the full security rig looks worn by Kanye and Bella, baby carriers (not real babies inside thank gosh) and the return of the knife boot and a new a platform clog, were elevated sequin dresses as worn by Julia Nobis. The resee unveiled soon to be fanatic pieces such as the teddy bear shoulder bags, Lays crisps pouches (Demna loves potatoes apparently) and huge oversized pochettes that fit an entire arm.

The sentiment had changed again abruptly by the time we arrived at Valentino and into a sea of hot pink. I have nicknamed this show ‘Waiting for Zendaya’ as that’s what we seemed to be doing for quite some time as we listened to celebrity mania like I’ve never seen before out on the streets. ‘Unboxing’, which was Pierpaolo Piccioli actual name for it though, did not need to rely on celebrities and what I thought was most special about it was that much of the show (close to 100 looks) was street cast. Upon closer inspection of the collection the day following at Valentino Place Vendome, it presented as both classical and a palette cleanser; with his signature dichotomy of intense drama and elegant simplicity.

The final day of PFW ushered in by Chanel was set to the tone of Alain Resnais’s nouvelle vague classic L’Année Dernière à Marienbad, solidifying Chanel’s attachment to cinema. A narration by Kirsten Stewart herself was followed by some of the most playful looks I’ve ever seen on a Chanel runway. This lighter, more contemporary iteration delivered shorts and polka dots, pastel gingham and crystal-heavy accessories. Left on our seats was a note on ‘Allure’ by French Film director Oliver Assayas. He wrote: “That is undoubtedly what fashion is about, ensuring the durability of the bold, timeless idea of a women’s freedom to be both herself and yet constantly new.” In the midst of the chaos, that does sound like something simple we can hold onto.

Miuccia Prada has done it again with this SS23 collection that reminded many of us just why we come to Paris. It was triumphant with caramel leather, a perfect milk-coffee toned denim, supersoft skins and sheers and just enough utility to make us feel like it has a purpose.  Executed with a gender fluidity that she articulated in the show notes as,” a challenge to convention and an embracing of our new reality,”, Prada also collaborated with artist Shuang Li and soundscaper and musician Eli Osheyack to digitally create a look into the future.

While FKA Twigs closed the show in a black mini, and Emily Ratajowksi and Bella Hadid ensured the star moments were there, this was a more stealth collection that can stand all on its own. The cut-out boots could just be the shoe of the season.

The last show of the season turned out to be also the biggest with Louis Vuitton staging a production of insane proportions in the Cour Caree.  The looks were also a play on proportions with accents such as giant zippers and chastity locks, stomper boots and exaggerated Renaissance collars.  This time Nicholas Ghesquiere worked with French artist Phillippe Parreno on the installation that reminded me of backstage at a festival or even Ibiza’s DC10. This was perhaps highlighted by Soulwax remix of Marie Davidson’s ‘Work It’ played at high decibels and inserting an intense energy to the show when we neeed it the most. The lyrics went…

“You wanna know how I get away with everything?
I work
All the fucking time
From Monday to Friday
Friday to Sunday
I love it
I work..”

Could we have just found our fashion week anthem? 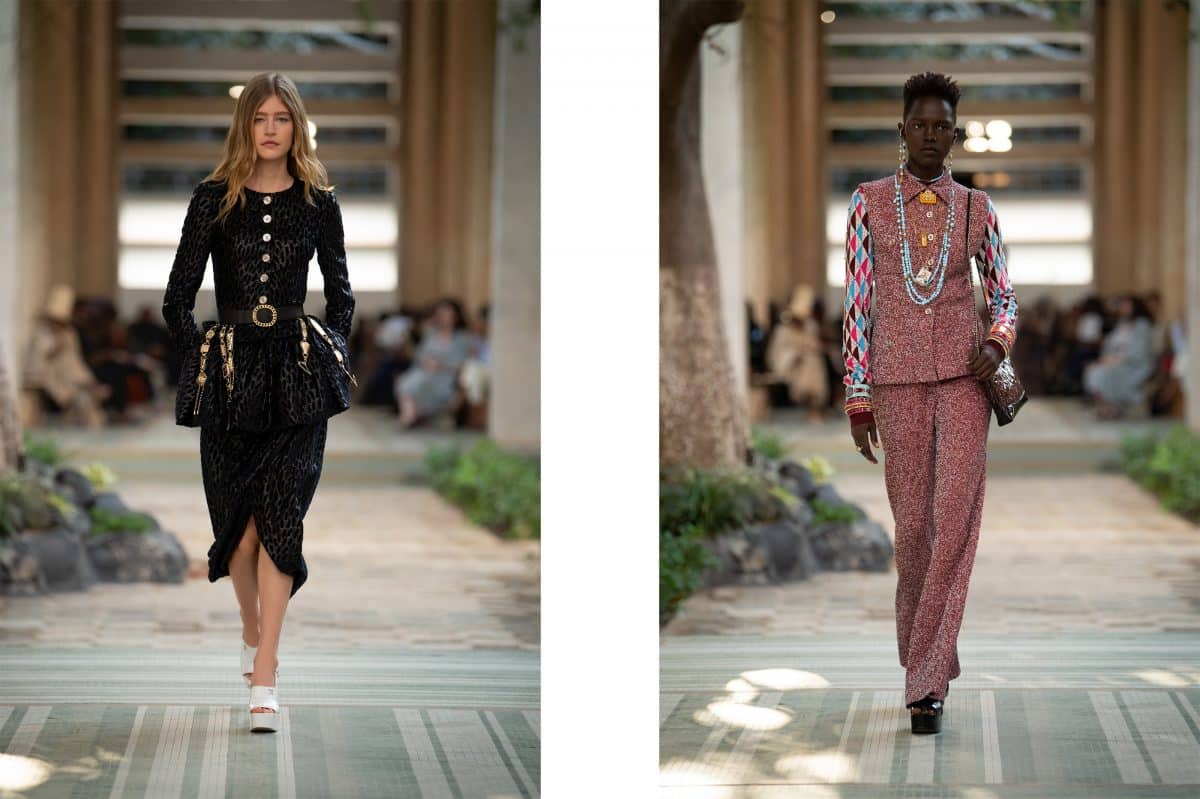