I have always felt an unexplainable connection to words. Which, in hindsight, shouldn’t come as too much of a shock, given I am now in the business of writing them. From a young age, language – both how we use it and how we interpret it – has challenged and fascinated me. It could be, in part, due to the fact that I grew up in a bilingual household; continuously translating new words I had learnt in English to their Greek counterpart.

The most difficult part was not necessarily remembering the language (although, I will say that navigating tenses did have me stumped for some time), but grappling with the understanding that not all words or phrases have an equal. In Greek, for example, the phrase for ‘I miss you,’ is written ‘μου λείπεις’ (mou leipeis), which is closer to ‘you are missing from me.’

From early on, I understood deeply that words have weight; not only in the way we communicate, but in how we connect with ourselves and the interactions and people who surround us. But it would be both naïve and remiss for me not to acknowledge that in some contexts, words have lost their meaning. As we continue to surrender to platforms that rely solely on visual mediums as a vessel for ‘meaningful’ communication, how much further will we need to go before words are trendy again?

In the eyes of Pierpaolo Piccioli, Creative Director of Maison Valentino, not much further. The House has always prioritised its deep connection to the literary world, continuously developing and strengthening its commitment to arts and culture. In March 2021, Valentino cemented this relationship, launching the first instalment of Narratives – a re-envisioning of the way fashion and literature can communicate with each other. A year later, the second iteration of the words-only campaign brought authentic and original storytelling to the forefront once again, seeing 17 internationally renowned authors lend their voices – and words – to the campaign. 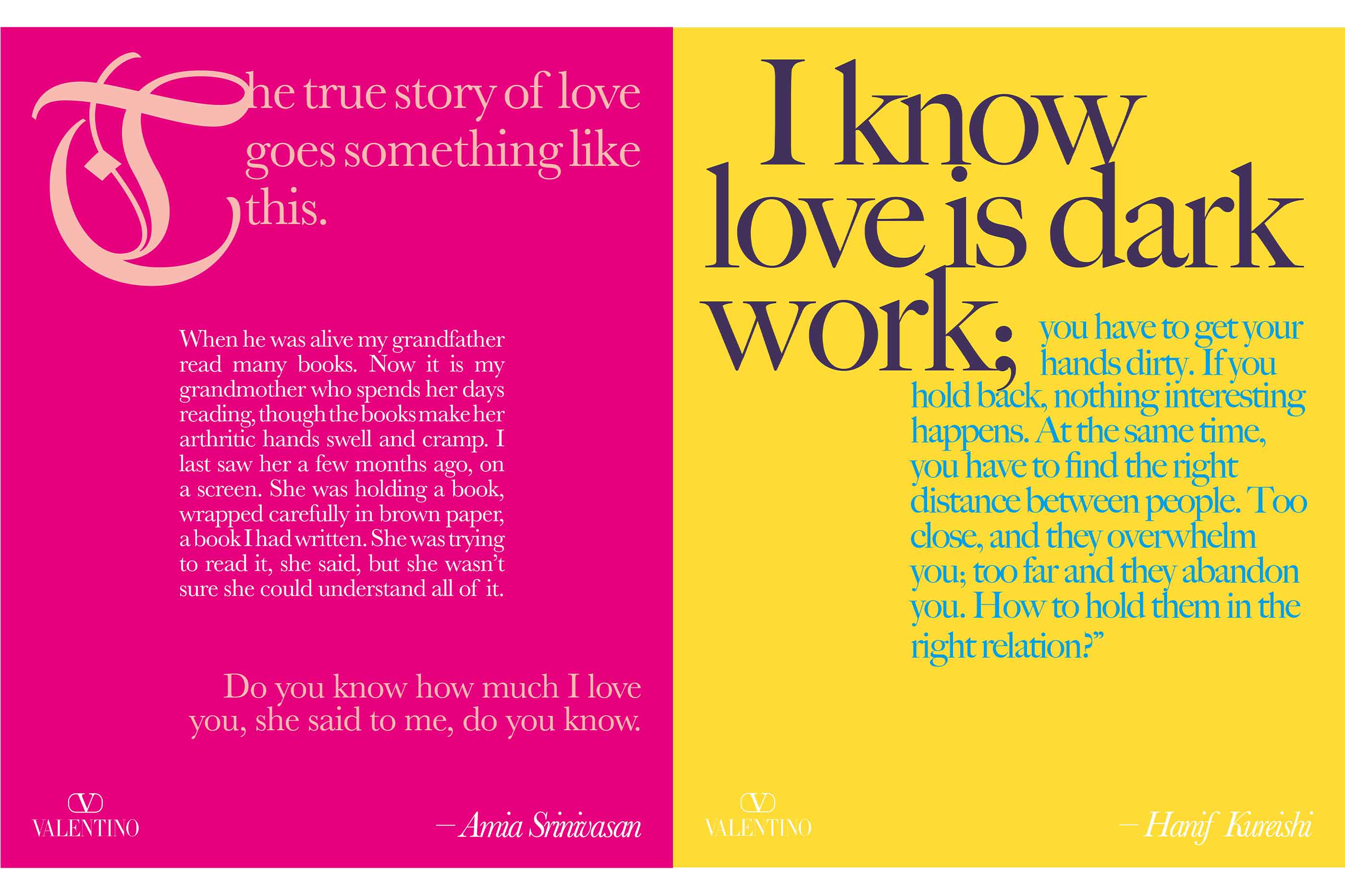 For Narratives II, the campaign embodied the sentiment of love in all its forms and meanings, uniting writers and poets to establish a multi-vocal community through the sharing of small, intimate anecdotes. A collaboration that includes the work of artists such as Leila Slimani, Fatima Farheen Mirza and Andre Aciman, the touching, raw and colourful posters found their way to different cities across the globe, celebrating an experiment in freedom of genre.

A space where joy, intimacy, heartache and romance could live freely, the initiative encouraged conversations of a different capacity – a dialogue between imagery and words where the two struck a balance. For Emily Ratajkowski, one of this year’s selected artists, the art of authentic storytelling played a crucial role in some of her earliest memories.

“My mum is an English professor, so it’s no surprise that books and reading were introduced very early in my life,” says Ratajkowski. “But, the type of storytelling that really stuck with me was outside of reading. My parents were the first storytellers I really resonated with, in the way that they would connect to people through language and conversation.”

“Even if my dad had recounted the same experience to us 100 different times, the real magic was how he had perfected these stories in a way that transcended his own experience and resonated with others outside of the story itself.”

Naturally, Valentino’s championing of creatives and literature has always been something that Ratajkowski admired; and the opportunity to participate in a campaign that serves as a reminder of the infinite potential of language was not something she was prepared to pass up on.

“I remember experiencing the Narratives campaign in its first instalment, and instantly falling in love with the way these incredible writers had paired their words with visuals. To now be included as one of the artists alongside creatives I admire so much and have the opportunity to give my writing the same breathing space is such an honour.” 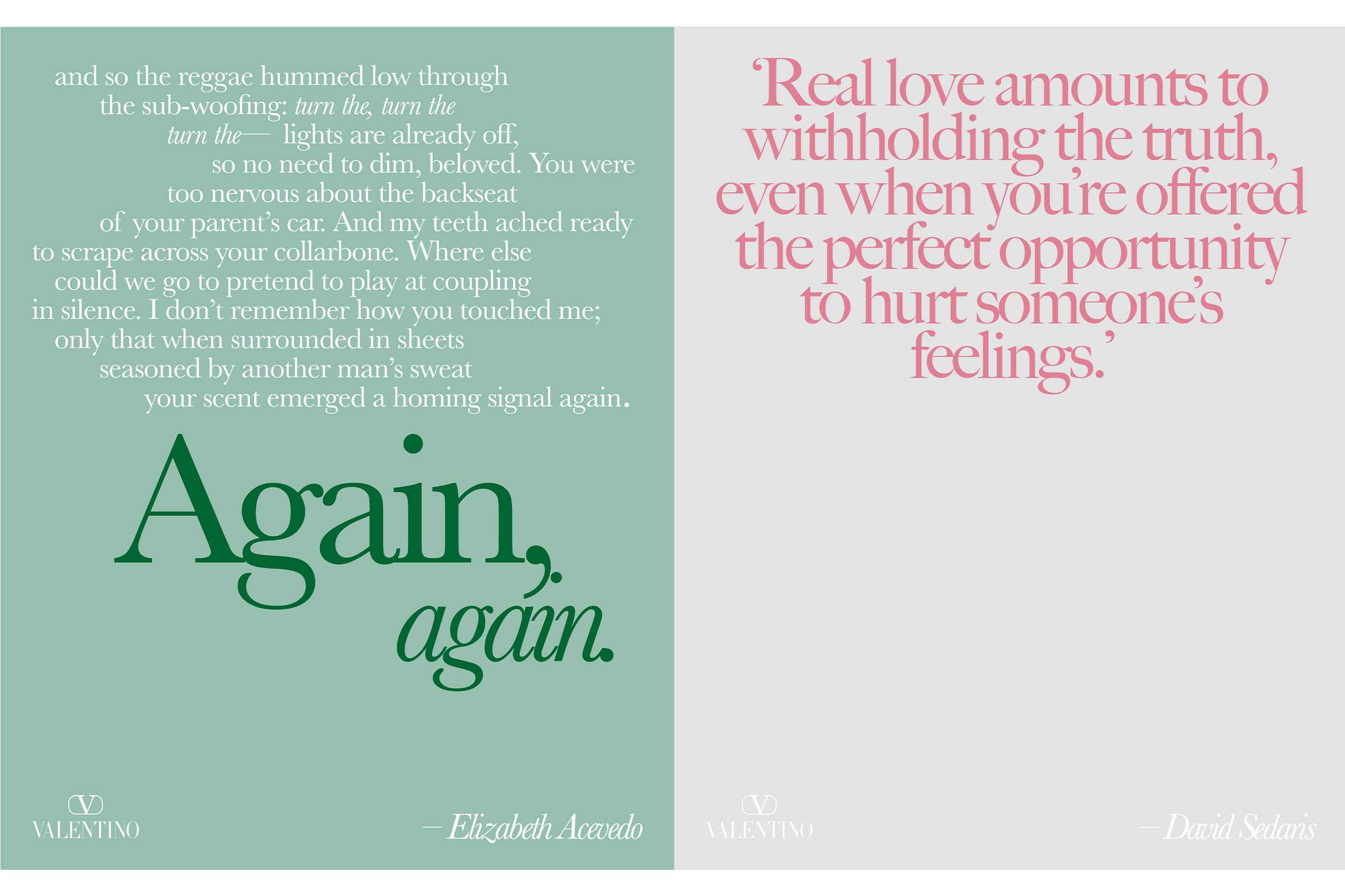 More immensely than many of us will understand, Ratajkowski’s life and career have been heavily dictated by imagery and visual platforms. Both rewarding and, in many instances, harrowing, her book, My Body, recounts these experiences from a devastatingly honest, nuanced lens – culminating in a collection of essays exploring themes of feminism, sexuality, the treatment of women as a commodity and the rationalisation of that treatment. Connecting with the model and author earlier this year, Ratajkowski spoke candidly about the role words played in reframing an identity that was so deeply defined by image.

“What I loved about writing my book is that with storytelling and writing, it forces people to pay attention in a way that many other forms of communication don’t. The way we consume media – images and video – you can essentially be half-engaged and feel ‘satisfied.’ But is anyone really digesting the whole message?”

“What’s so refreshing about seeing my words, and the words of other artists, blown up on billboards or pastings is that people have to actually stop and really understand what they’re even about, or what they’re saying,” she continued.

When it came to selecting her excerpt for the campaign, Ratajkowski toyed with the idea of writing a new, original piece about love. That was until a moment of reflection, when while remembering some of the hardest, most challenging pieces in her book, she was instantly drawn to this chapter. Explaining the piece to me, she described the memory as “a moment where I was really in my body and felt an appreciation for it in a new way outside of the exterior.”

“It was this juxtaposition of being surrounded by so much love, while also battling the physical challenge of bike riding in the heat while being heavily pregnant… Being in an environment where there is deep support and love from these people who know me so well and my body almost doing the impossible and letting me have this experience.” 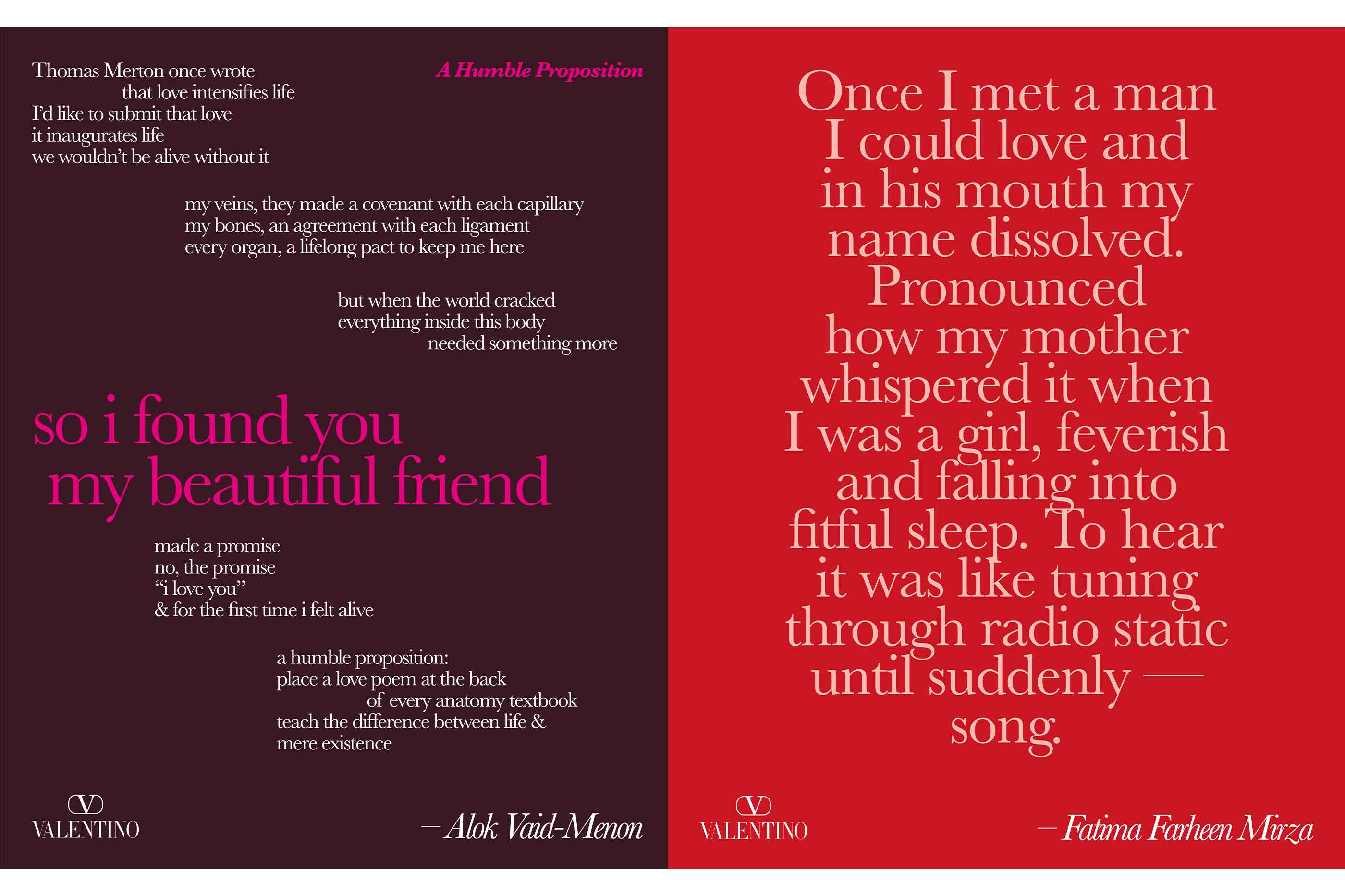 She admits to me that it’s one of her favourite parts of her book, despite being one of the shorter paragraphs. It also happens to be the last chapter she wrote – despite not being the final essay – which draws some interesting parallels to the book’s non-linear structure.

“I realised that the nuance of my experience wasn’t going to be captured if I started from day one of my life and wrote my book from there. I wanted to be able to weave all these moments together, because that has truly been my experience of life. All these compiled memories and experiences and that’s how I remember them.”

For Ratajkowski, words have always been the conversation starter. When I ask her about her most rewarding moments since releasing My Body and as part of Valentino’s Narratives II, without hesitation, she begins to tell me about the conversations she has had with strangers on the streets.

“On occasion, people will come up to me and say ‘oh, this chapter spoke to me in this very specific way and connected to my own experiences in words that nobody has ever expressed before’.”

“I have to stop myself from getting very emotional in these moments because the conversation is so genuine. These people have read my book years after I finished writing it and experiencing the stories I’ve included. It’s amazing to see my experiences living past me in real time and the appreciation from people who don’t even know me.”

It seems words haven’t lost their meaning after all.

PREVIOUS
Editor-in-Chief Jess Blanch's Paris fashion week diary
NEXT
In the name of cashmere, a guide on where to buy Max Mara