Everyone has arrived in Paris for the final leg of fashion month. So far, we've seen Maria Grazia Chiuri deliver a historic lesson in power dressing at Christian Dior, with her muse for the season being French queen Catherine de Medici. Meanwhile, Anthony Vaccarello staged a true spectacle under the stars and the shadow of the Eiffel Tower for Saint Laurent. It's clear the season is going out with a bang, and neither our heart or our wish lists will leave unscathed. Find our highlights from Paris Fashion Week SS23 so far, below.

Acne Studios struck up a conversation between the pastel-hued fantasies of girlhood and the edgy sensibility that keeps us coming back season after season. A sorbet colour palette was offset with moody, almost gothic bronze and coppers, metallic blue, carnal reds and a healthy showing of black. This interplay between soft and hard was seen in the bow motif laced throughout the collection. In silk trims they appeared as accessories – on the toes of satin sandals and boots, trailing off a bicep, or, at one point perched atop as nipple coverings – or as sole garments, wrapping around the model's torsos like a Grecian toga.

Other looks emulated the curved lips of rose petals, hemlines held aloft with wire, while rosettes appeared as belts or on the collar of gingham suitings. Although, they were not without their aesthetic opposite, silver studs added grit to the collection, gilding everything from hoops to belts to boots to handbags. A rose cannot ever be without its thorns?

As for the staple denim? There was jeans that rose to chest height, redolent of the viral Balenciaga pair worn by Alexa Demie. While other pairs pooled at the ankles like leg warmers, the silhouette of which has been growing in popularity of late. We are in awe, as always. 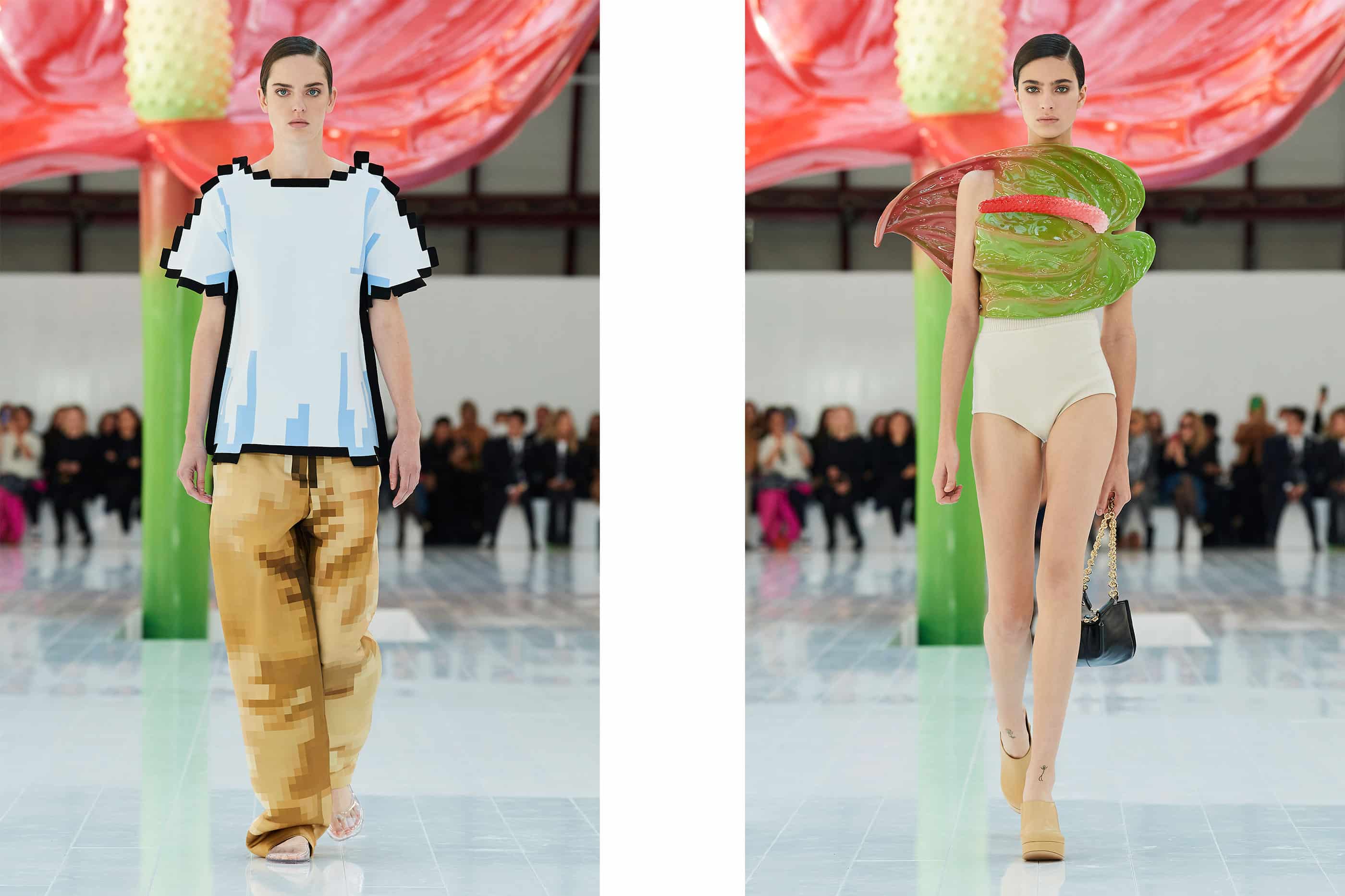 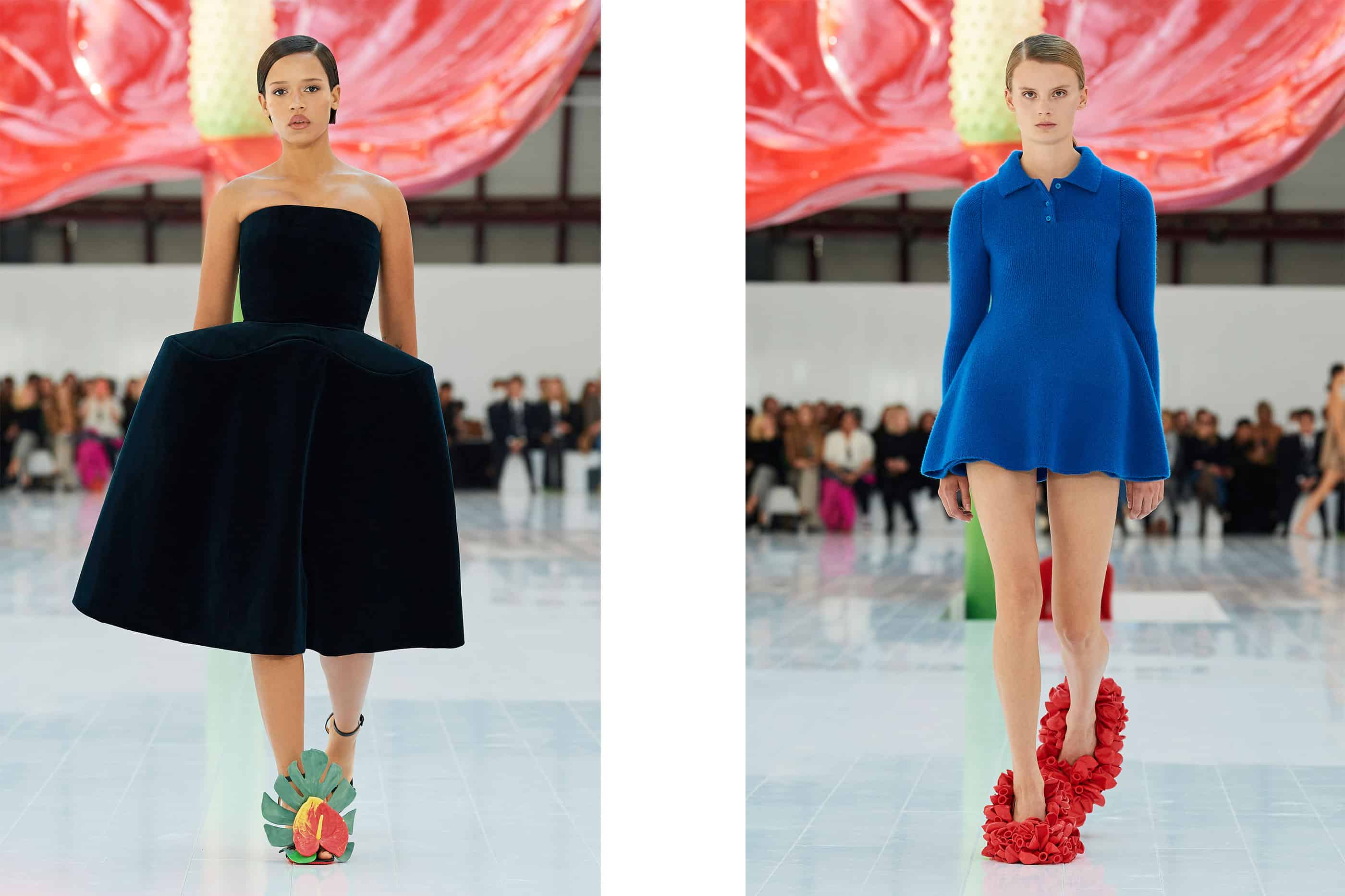 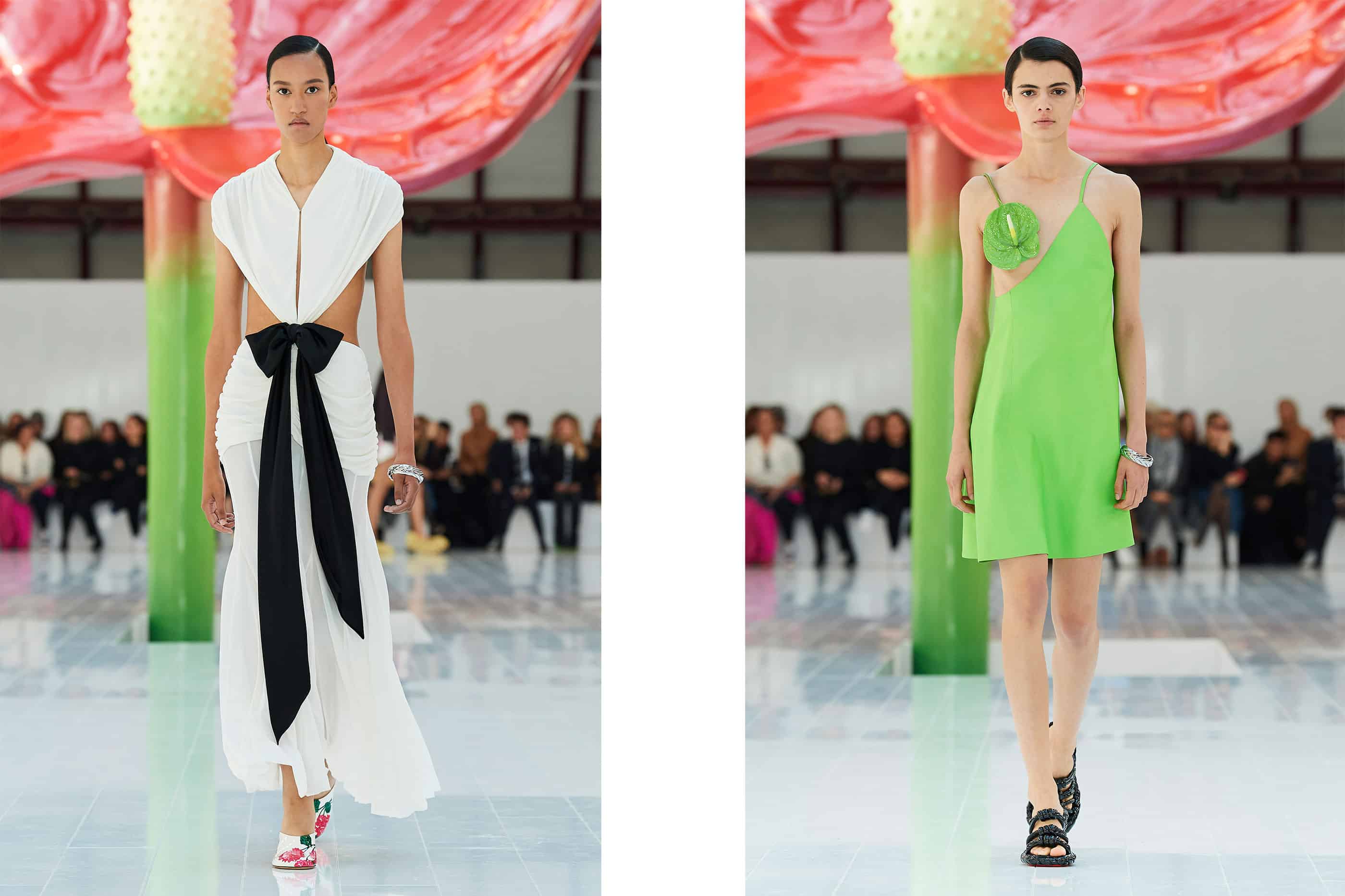 Anthurium's were on Jonathan Anderson's mind for Spring Summer 2023, a somewhat natural progression for the designer who has been playing with both the surreal and the environmental for seasons past. For his latest collection for Loewe, Anderson merged his ongoing conversations around objects like balloons for FW22, and nature, like his living Men's Spring 22 show that featured hoodies sprouting micro greens and trainers sprouting grass. For Spring Summer 23, the collection focussed around a single plant – or rather, a single bloom. Anthurium's were everywhere. From the giant, glossy sculpture of one in the middle of the set, to molded bodices shaped of them, and downsized versions to cup the bust of a mini dress. To accompany the sculptural foliage, there were mini skater dresses aplenty, with subtle empire waists and pleated skirts paired with pumps covered in deflated balloons. For two looks, shirts and pants were printed with a pixelated design, looking like they had been plucked straight out of and old version of Grand Theft Auto or Minecraft, breaking up the fluid, soft silhouettes of chiffon and velvet and reminding us of Anderson's affinity for all things surreal. 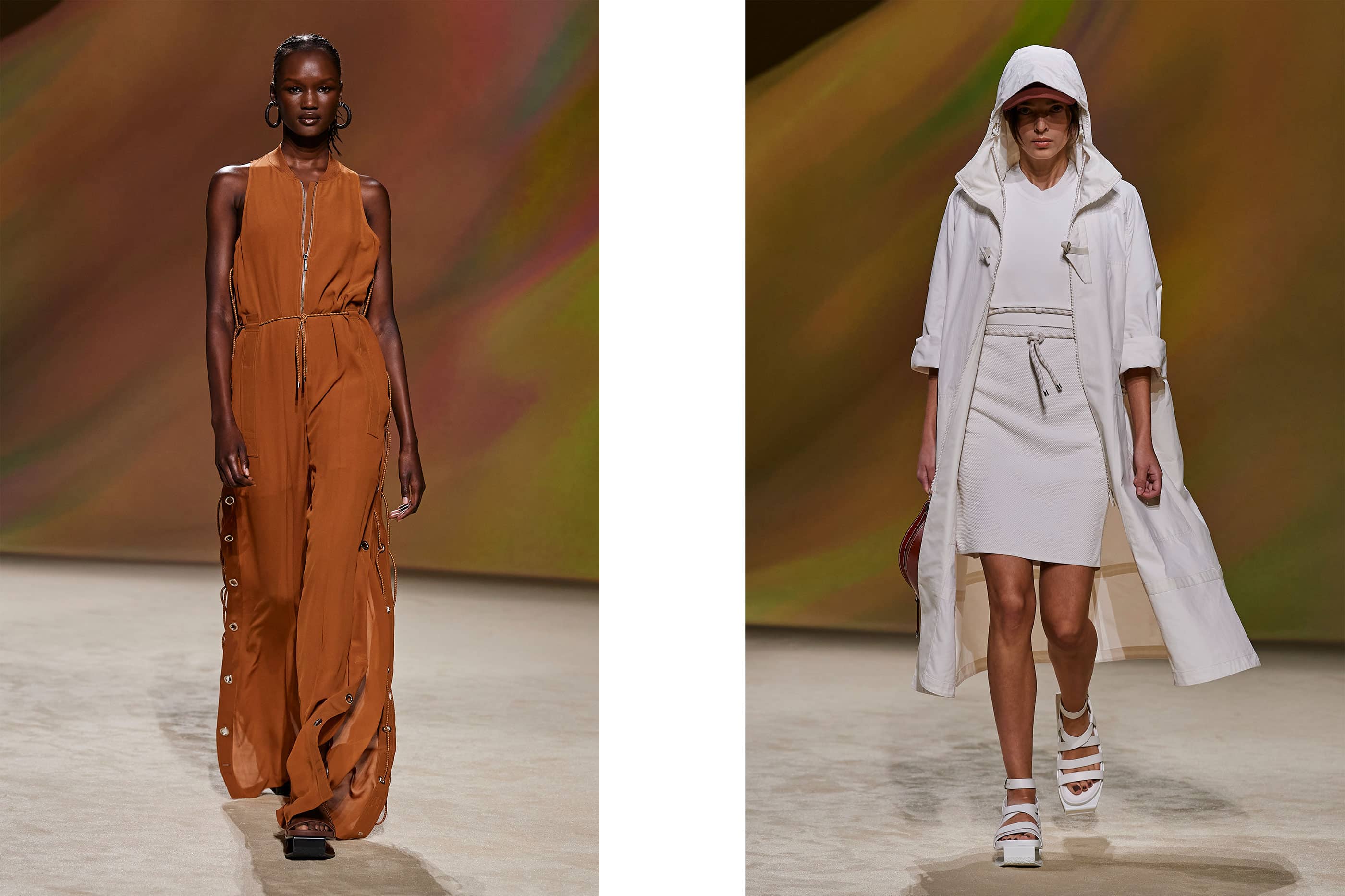 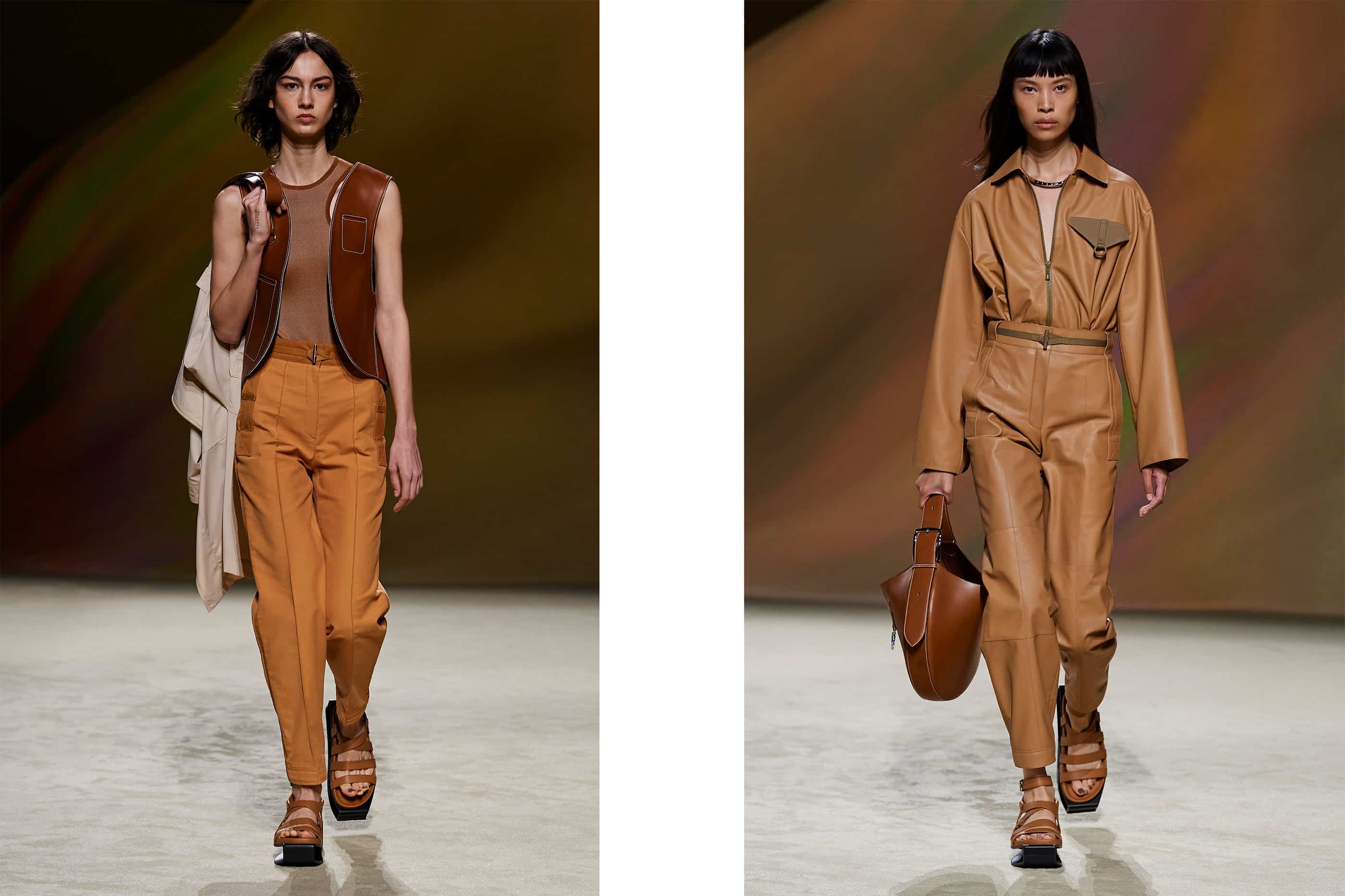 Hermès has always been about tactility at its core, and for Spring Summer 23, the House leant into its roots. Amid a giant dune that served as the set, Nadège Vanhee-Cybulski nodded to easy hiking wear. Naturally, one is not necessarily going to be walking a Camino in a Hermès leather trench, but a day trip up a moderate hill? Sign us up. the collection was both utilitarian in a sense and a high point of luxury, as Hermès always is. For example, the back of hooded jackets rolled up to reveal breathable mesh, but the brands take on a gladiator sandal wouldn't make it up a hill if it were its only purpose. Nonetheless, if we needed true hiking gear we would likely look elsewhere, because after all, Vanhee-Cybulski isn't in the business to craft the next jacket for a trip up Kilimanjaro, it's to create an idea that we all want to be a part of. And between the rich, earthy palette of deep sands, bright coral, and warm terra-cotta, and the supple leather, asymmetric hems, and featherlight sandals, you can almost picture yourself there. 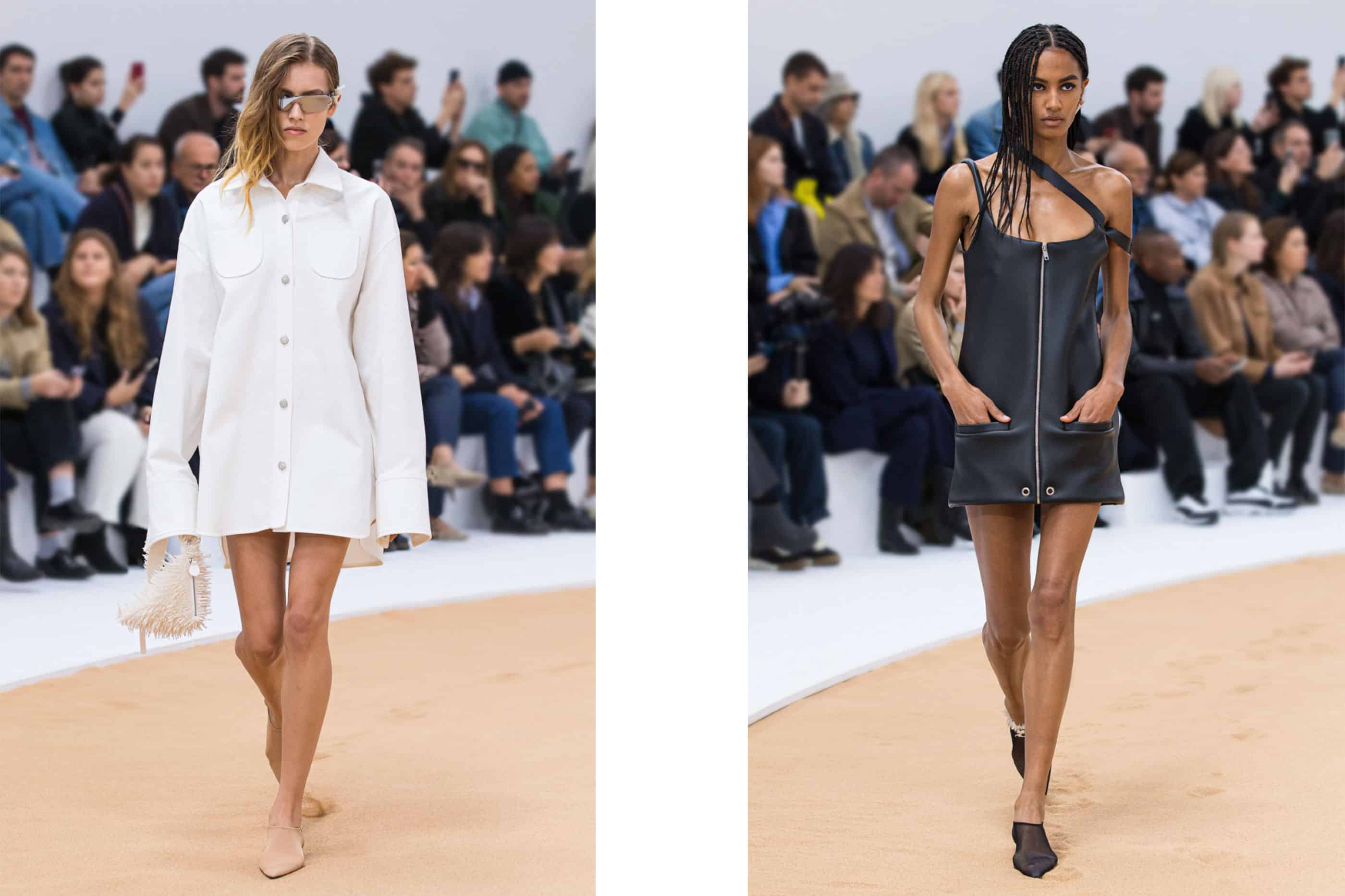 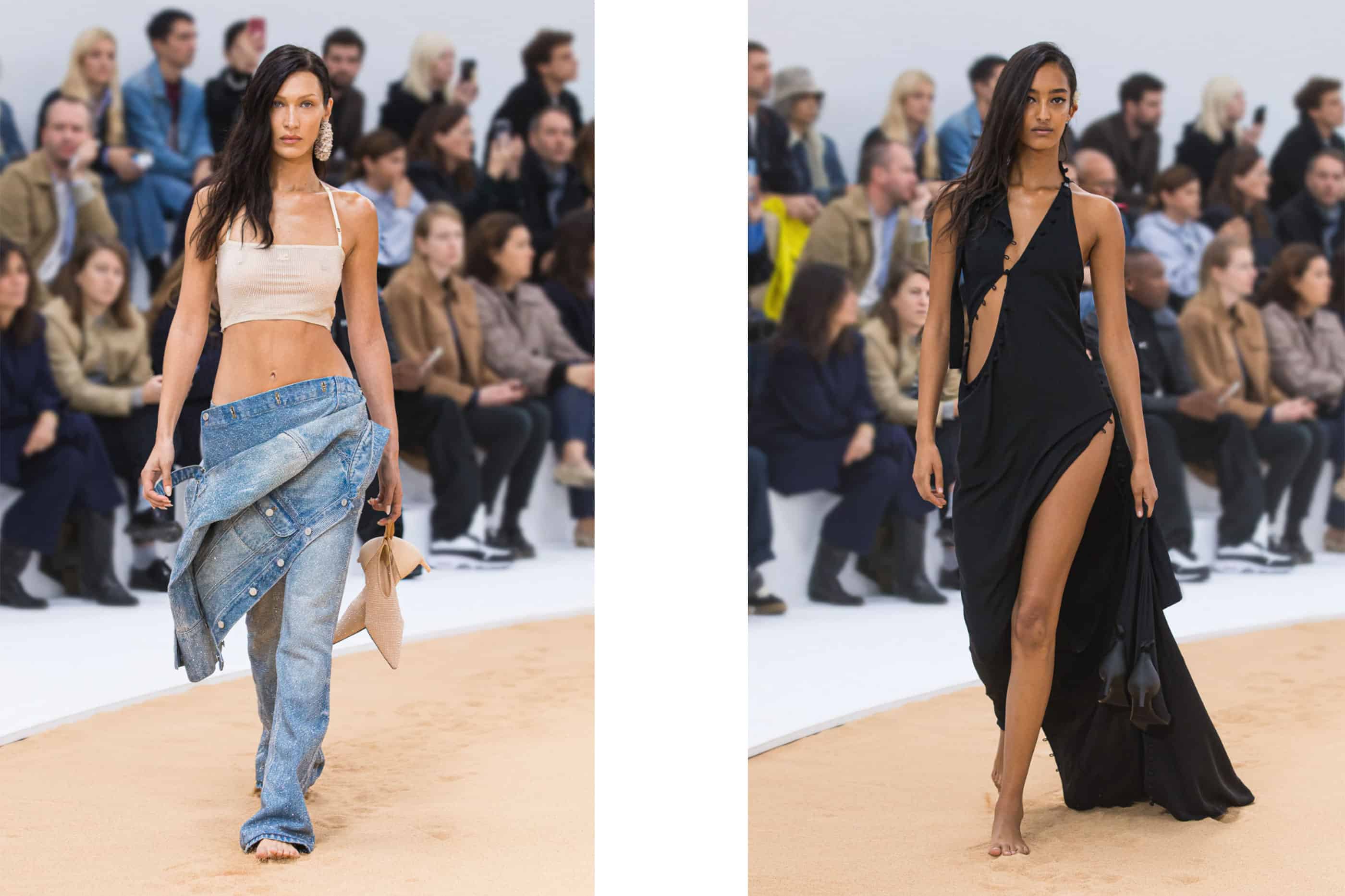 At Fendi's SS23 show, model Grace Valentine seamlessly took their platform sandals off mid show due to a rubber-meets-moisturiser mishap. It looked like part of the show, and made the feel of the look infinitely better, which was why at Courrèges SS23, where models walked through a circular, sand covered set, carrying their kitten heels instead of wearing them, it felt like the only choice. Nicolas Di Felice is having a very good time at Courrèges right now. Once a brand that was best known for its subtly branded co-ords has transformed into a House surrounded by hype in recent seasons. Why exactly, is still hard to pinpoint, but the beach-rave energy that was brought to SS23 was one that caught our attention once again. 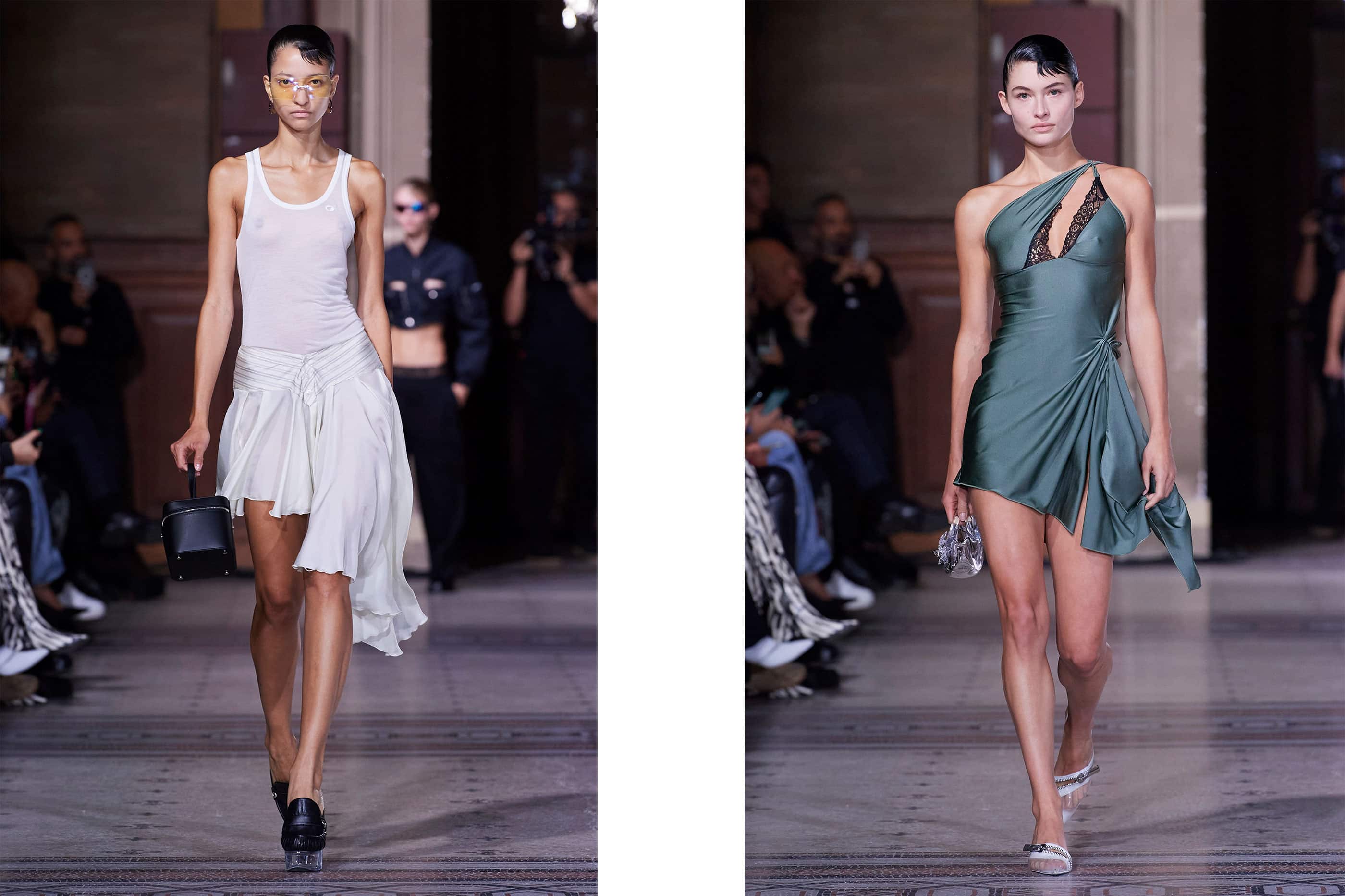 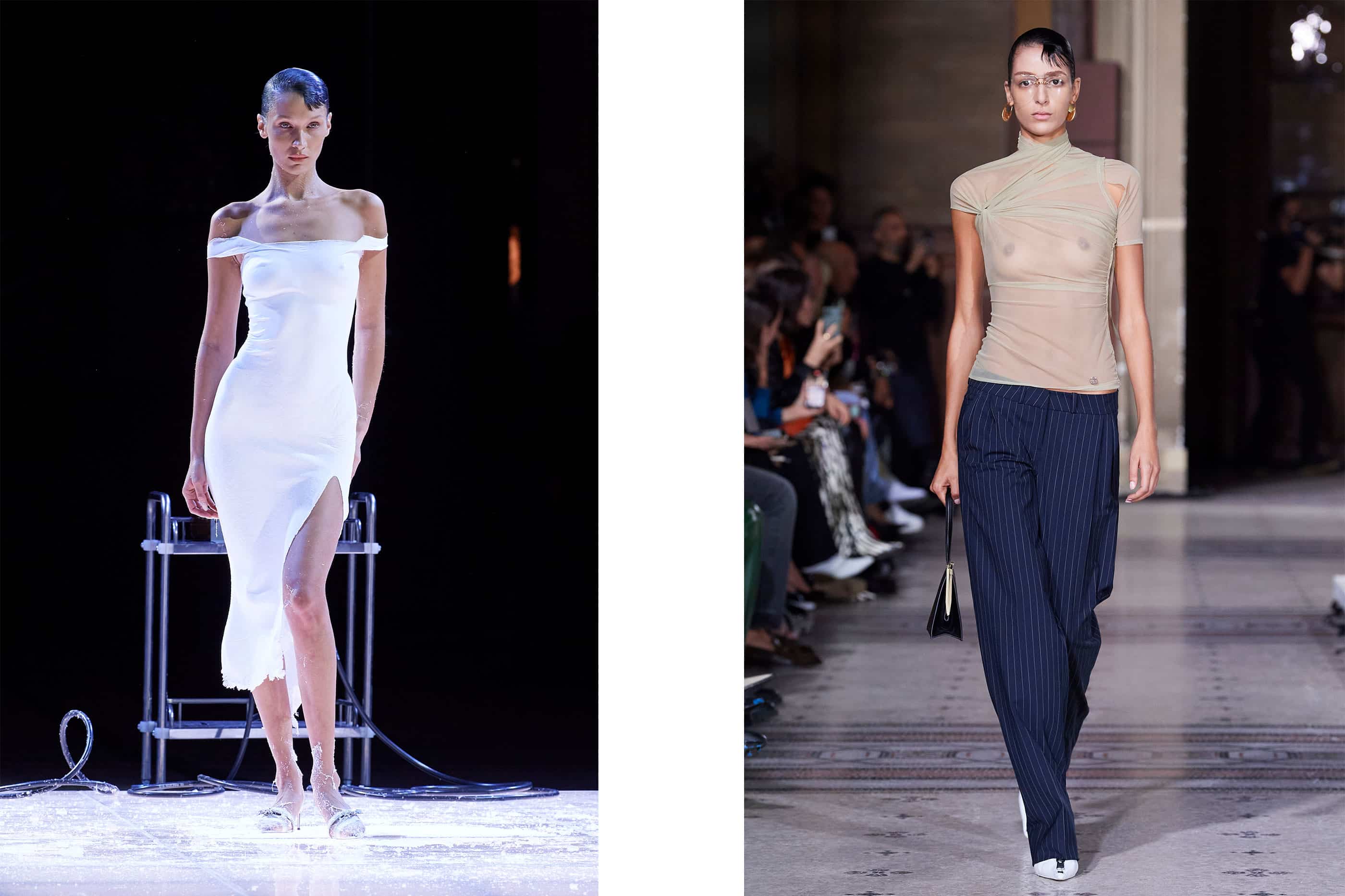 How can we discuss Paris Fashion Week moments without touching on one of the most viral moments of the week? For Coperni's SS23 show, there were perfectly tailored trousers and asymmetric spandex dresses. The brands signature cargo pants returned for another season, and their going out dresses were reimagined and embellished with what looked like shards of glass. All of it felt very light, very thoughtful, and very Coperni. The brand has been making moments on the runway for a few seasons now, riffing on trendy silhouettes and offering up their own spin on pieces that will always be likely to sell well.

This season was no different, except for the closing moment, where designers Sébastien Meyer and Arnaud Vaillant invited fashion's darling Bella Hadid to take her place on a platform in the middle of the runway in nothing more than a nude thong. Over the space of under 10 minutes, a spray liquid that shot out of a bottle and covered her naked skin was worked into a dress whose hem was cut and shoulders rolled, and Hadid took the final exit in the pure white dress. 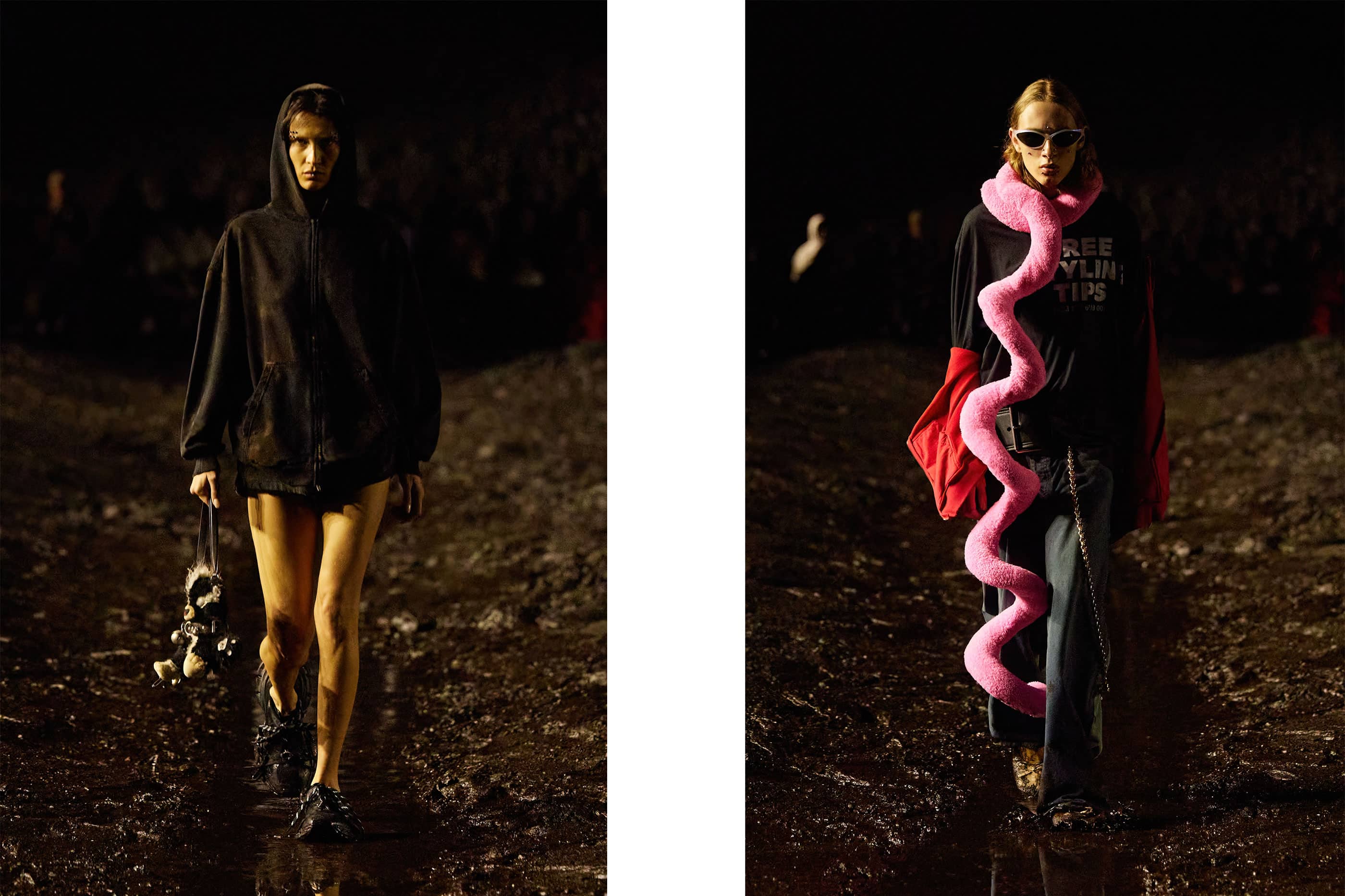 For FW22, Demna sent models down the runway in a simulated blizzard designed to signify a time when fake weather might become the norm. For SS23, the designer scrapped the metaphors (kind of), and had models trudging through a pile of mud to make a comment on the fact that he would be digging deeper from now on. Arguably, the most posted about moment from the whole affair was Kanye West opening the show in a classic Kanye X Demna look, followed by a slew of models in hoodies and low slung pants, shirts off, carrying bags that looked like stuffed animals.

Most of the first half of the exits looked as though they could be anyone who'd spent a couple of days raving, but as we know from what Demna offers up in his press releases, it was also more than that. Gowns whose hems soaked up the dark brown liquid they trudged through were accessorised with faces full of piercings, and the whole thing was closed out by a kind-of butchers apron crafted out of the brands signature City Bag paired with one of the most apocalyptic walks we've witnessed thus far. 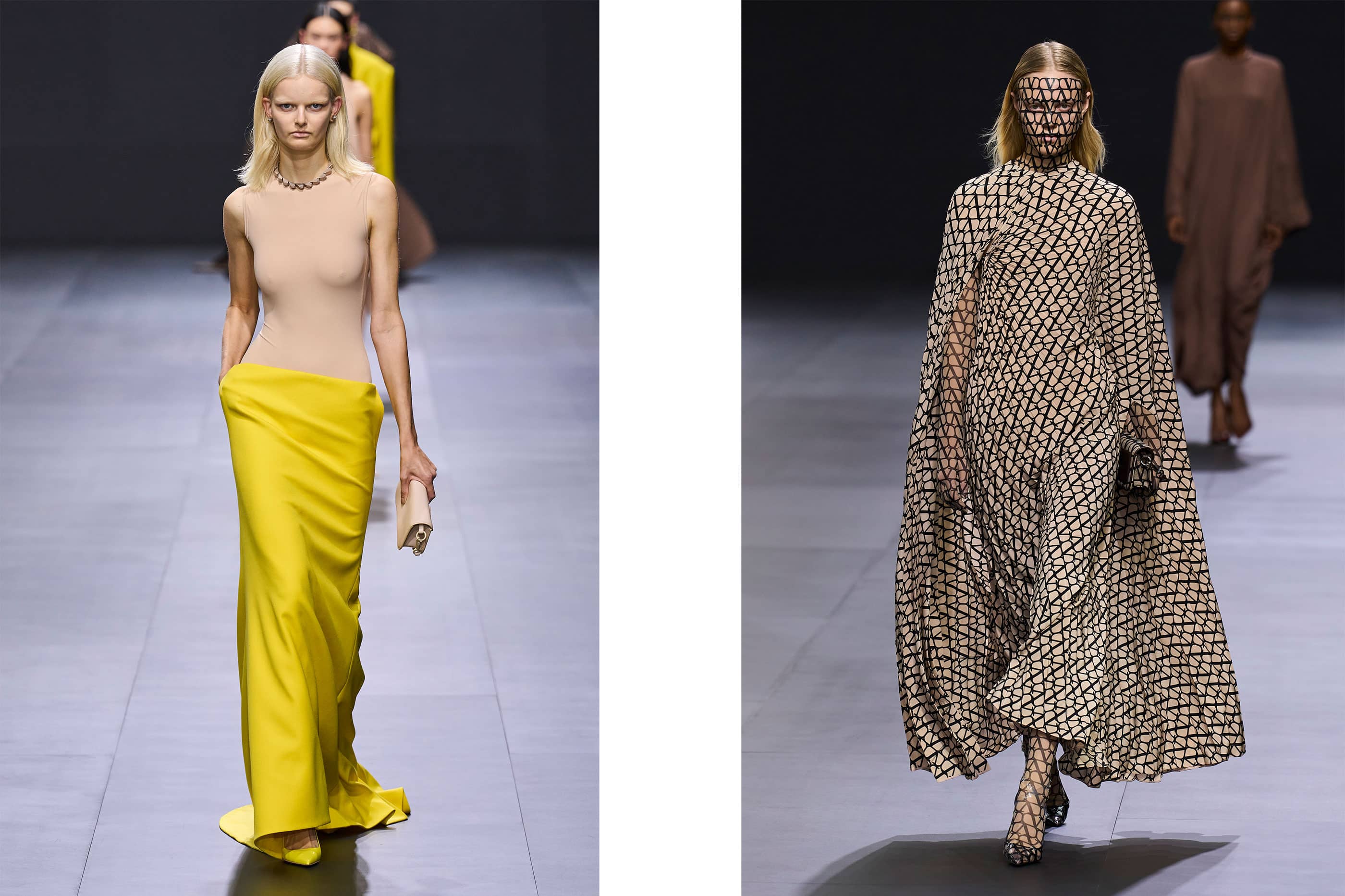 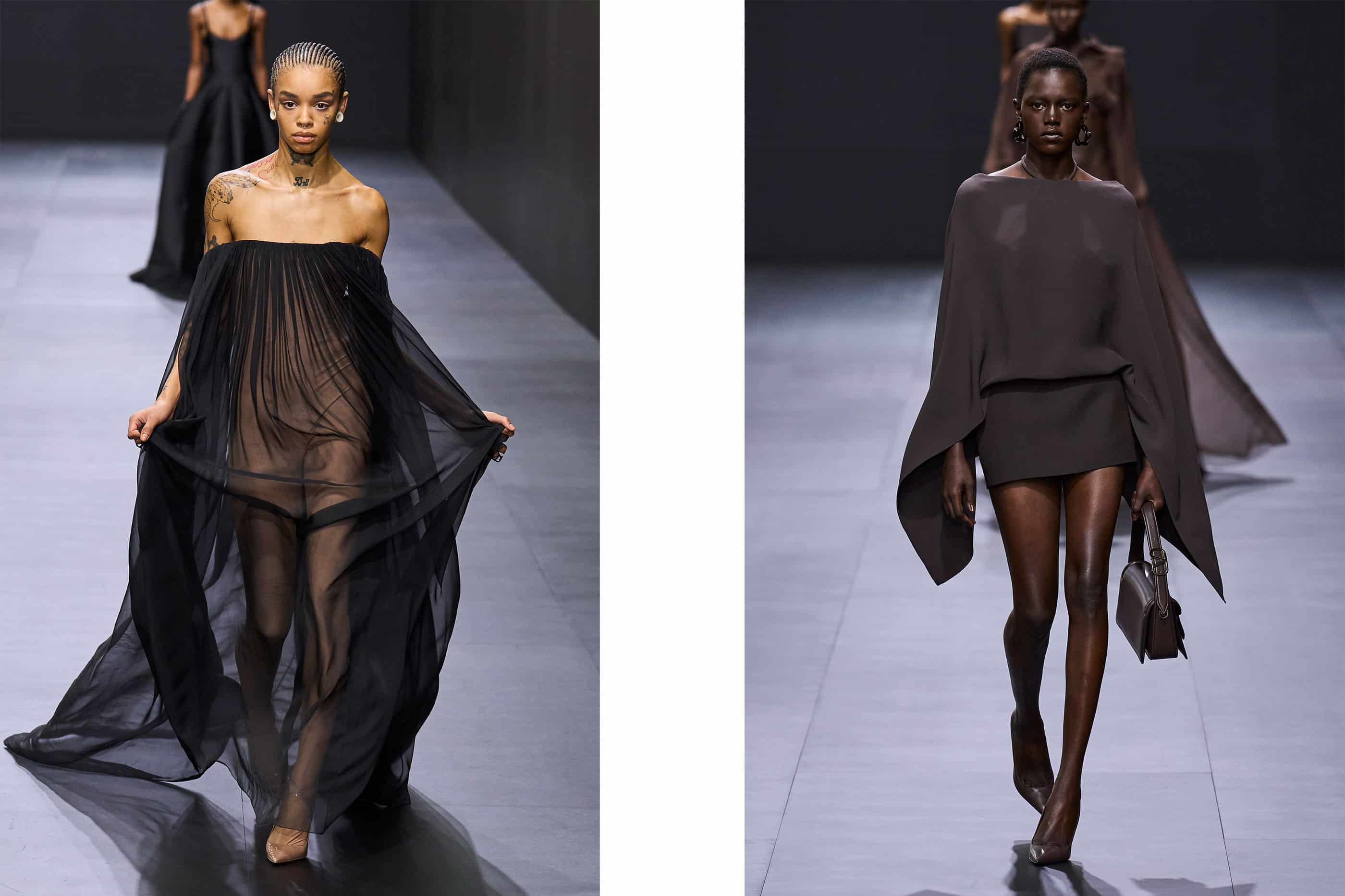 The first exit for Valentino's SS23 show was an announcement: Valentino has a new look. Pink, according to Pierpaolo Piccioli, is no more. Instead, a pale beige dress emblazoned with the house's new logo, that was also printed across the models face – just to make sure we got the message. Through the collection, the logo was everywhere. It was on capes and tights and trench coats and tote bags. And between it all, was the Valentino we all know and love, under the steady hand of Piccioli. While colour, especially Valentino Red was still present, it was offered up amid a sea of neutrals.

A skin tight beige tank was paired with a neon yellow column dress; a charcoal cape top was accompanied by a black micro skirt. Full, embellished skirts in ice blue and lavender were worn with beige crew neck tops, while ostrich feather separates were paired with similar basics.

Towards the end, a barrage of black gowns. Perfectly cut and expertly fitted, there were slinky slip dresses with pockets, off the shoulder translucent chiffon that looked fluid as water, next to full taffeta skirts with cinched bodices and tuxedo coat dresses. These days, Piccioli has us hooked, and we've got no intentions of jumping off the train. By the end of the week/month, just about everyone was braced for truckloads of virality on the Miu Miu runway. Not in the same sense that Coperni achieved this season, but in Miuccia's quiet way. Tapping into moments we're bound to obsess over and doubling down on the fun of it all. After all, Miu Miu is Prada's younger, funner sister. This season, Mrs. Prada riffed on the silhouettes the fashion crowd has been foaming at the mouth for, but offered them up with enough difference as to not feel repetitive.

In place of sharp poplin button downs and preppy polo's, were layers of cotton jersey piled upon each other. A grey jersey tank was worn over a beige long sleeve, worn over another white long sleeve, paired with what will undoubtedly be a boot in every fashion girl's wardrobe with it's sock-like effect and open, flip-flop toe.

The purposely worn-in leather was still there from season's past, this time iterated in the form of blazers, trousers, and shorts, skirts, and belts with front pockets big enough to leave your Matelassé bag at home. Above all else, it was a lesson in styling, layering, playing with proportions and, ultimately, having fun. 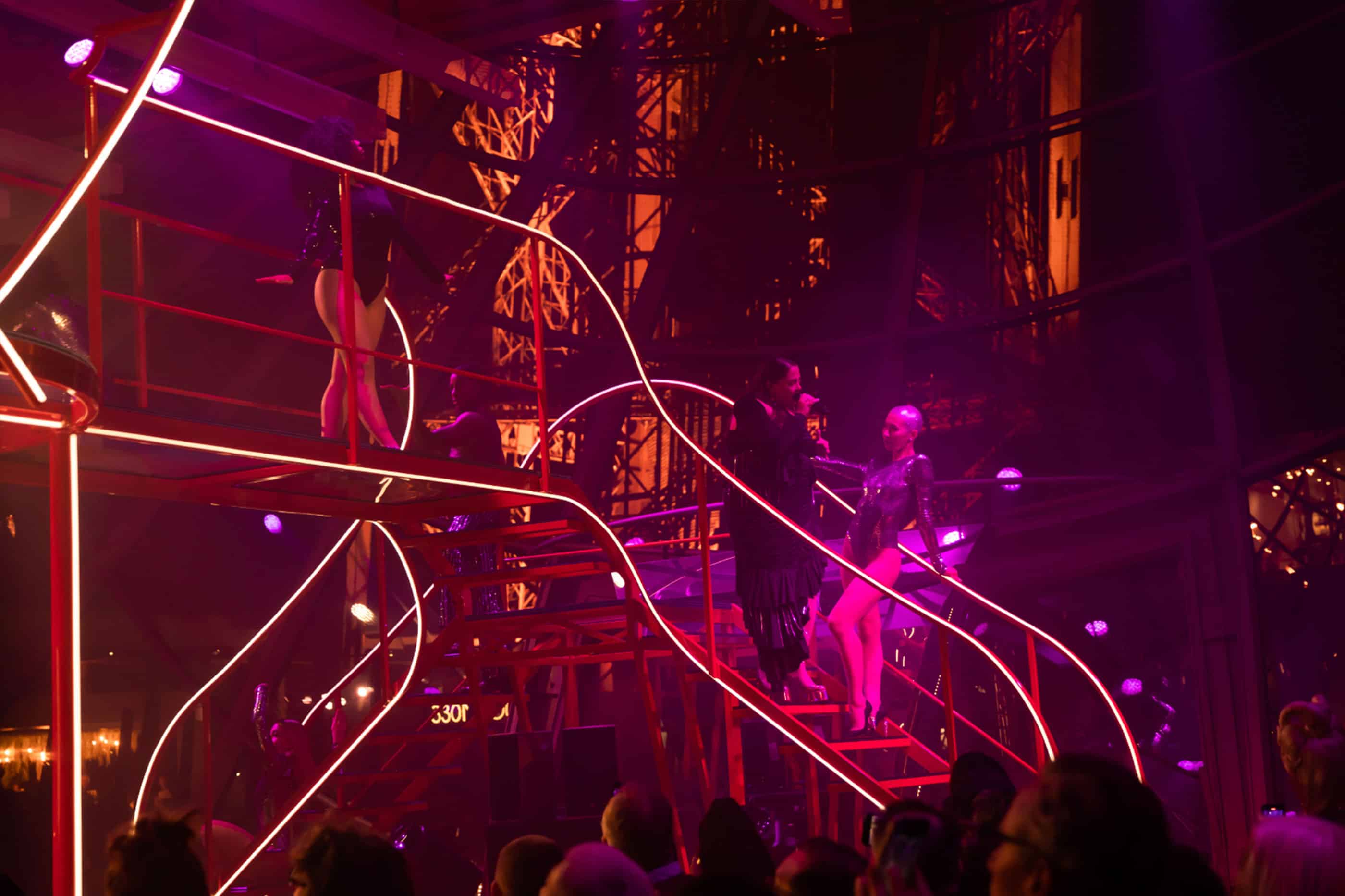 The Loubi Show II Spring Summer 23 took place in the heart of the Eiffel Tower during the middle of fashion week, and pulled focus on new styles and colours to ring in the new collection. Savoir-Faire was on full display, embedded in every day essentials and hand-crafted seasonal must-haves.

Thirteen dancers displayed the collection, including a number of neon styles as the dance became interpretive and contemporary, transforming from robotic to emotional.

Want a refresher on the last few weeks? See our SS23 highlights from New York, London and Milan, here.

PREVIOUS
An icon of watchmaking, the Chanel J12 as seen on Thomas Cocquerel in the 'Wonder' issue
NEXT
The next Met Gala theme could be a homage to Karl Lagerfeld