Dior's Winter 23 Menswear show opens against the backdrop of Robert Pattinson and Gwendoline Christie's faces. They are reciting T.S Eliot's The Waste Land, the profoundly melancholic poem written post-World War I to a live orchestra. It sets the tone before the models start to slowly stroll onto the runway.

Kim Jones has always had a way with references like this, pulling from his own past (he apparently owns six copies of the century-old poem) while delving into the archives of a House, bringing the two together in a kind of symbiotic display of memory, history, sentiment, and modernity. He referenced Yves Saint Laurent's first moments at Dior, at just 21 years old, after the death of Christian Dior. This freshness was translated through pale hues and fluid shapes. Creams and blues, taupes and, of course, Dior grey. The tailoring – a forever standout in Dior collections – was reworked to feel intentionally "off". Lapels and collars were shrugged slightly off the shoulders, while elsewhere collars were upturned and secured with a brooch, revealing the felty undersides of the lapels. 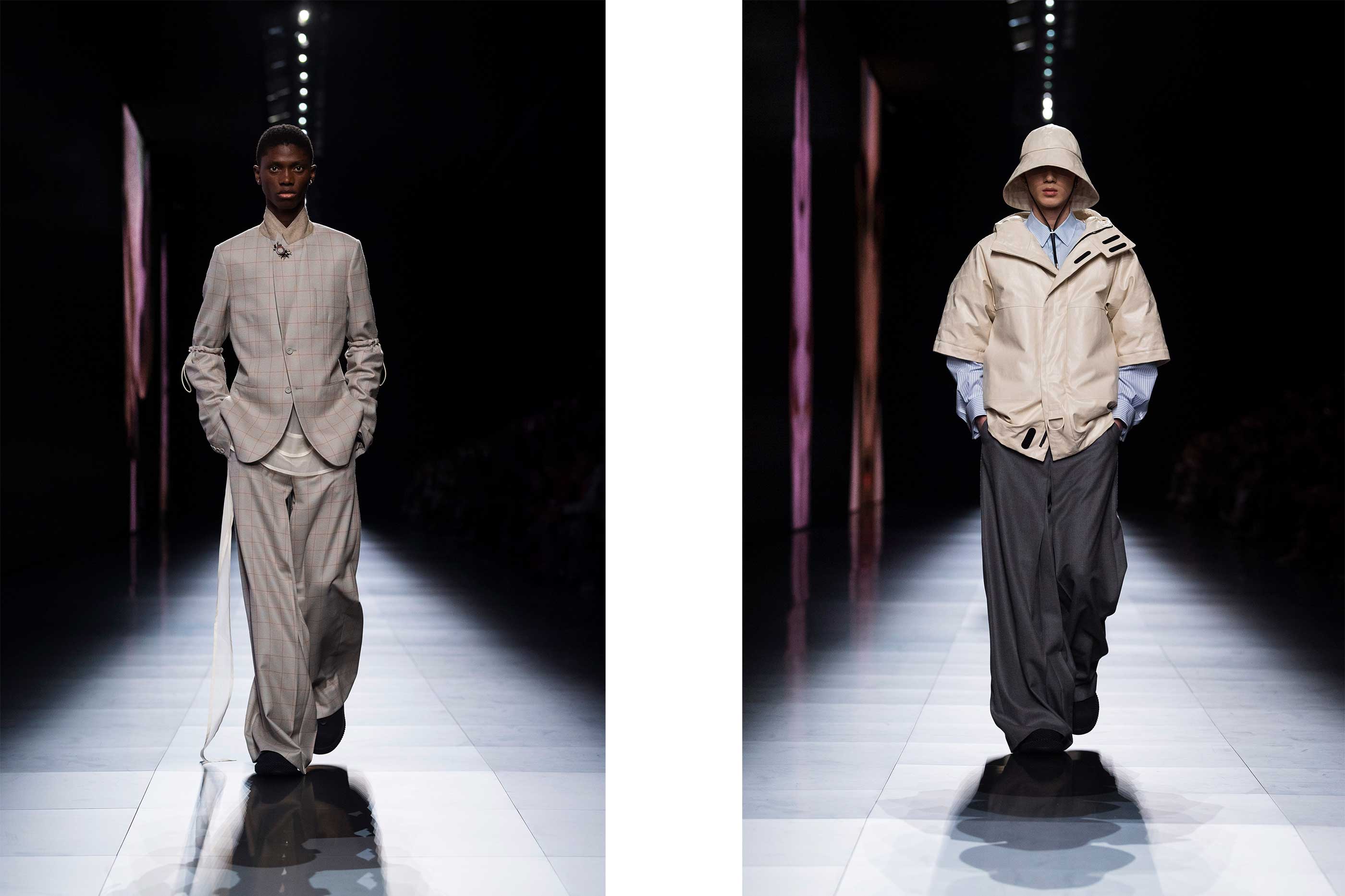 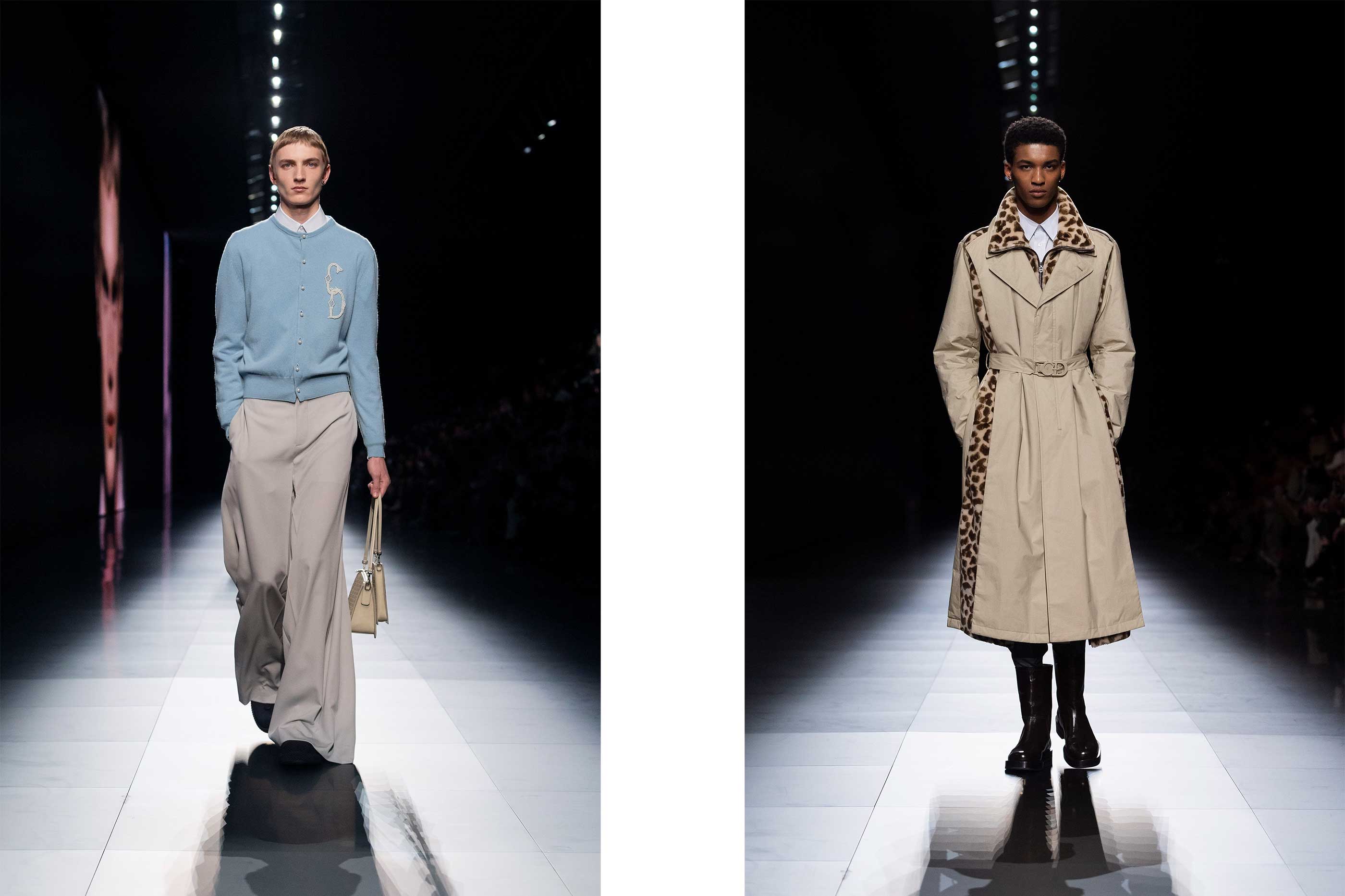 Suiting was layered over fluid shirts that poked out the back of jackets and featured long, transparent trails of cotton. The second look, a cream blazer paired with a tweed skirt and Jones' take on a rain boot, featured tiny, delicate lilies of the valley embroidered across the chest – a nod to Monsieur Dior and his great love of florals. Cable knit pullovers had holes in the armpits as a kind-of alternative to slinging your knitwear over your shoulders, while finer knits missed one arm entirely, scrunched up over the shoulder to add a feeling of looseness. Elsewhere, rain jackets and rain hats were layered over wide leg trousers and crisp poplin shirts. Later on, Jones' interpretation of a life jacket emerged with buoyancy pads as Christie and Pattinson moved to Eliot’s passages on drowning. Our minds couldn't help but think of Robert Eggers' The Lighthouse, with Pattinson's harshly lit face up there and oilskin raincoats and knitwear marching across. 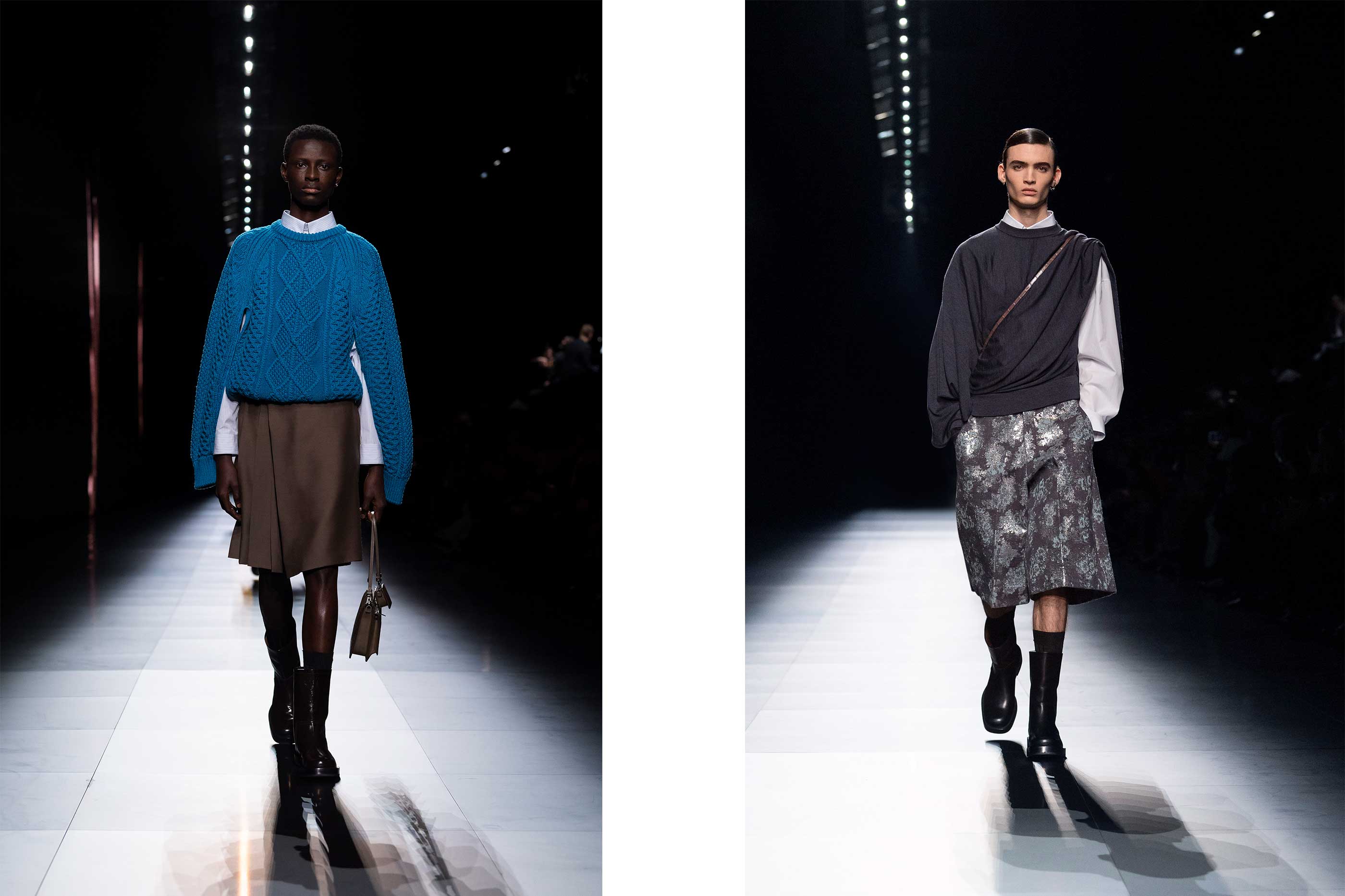 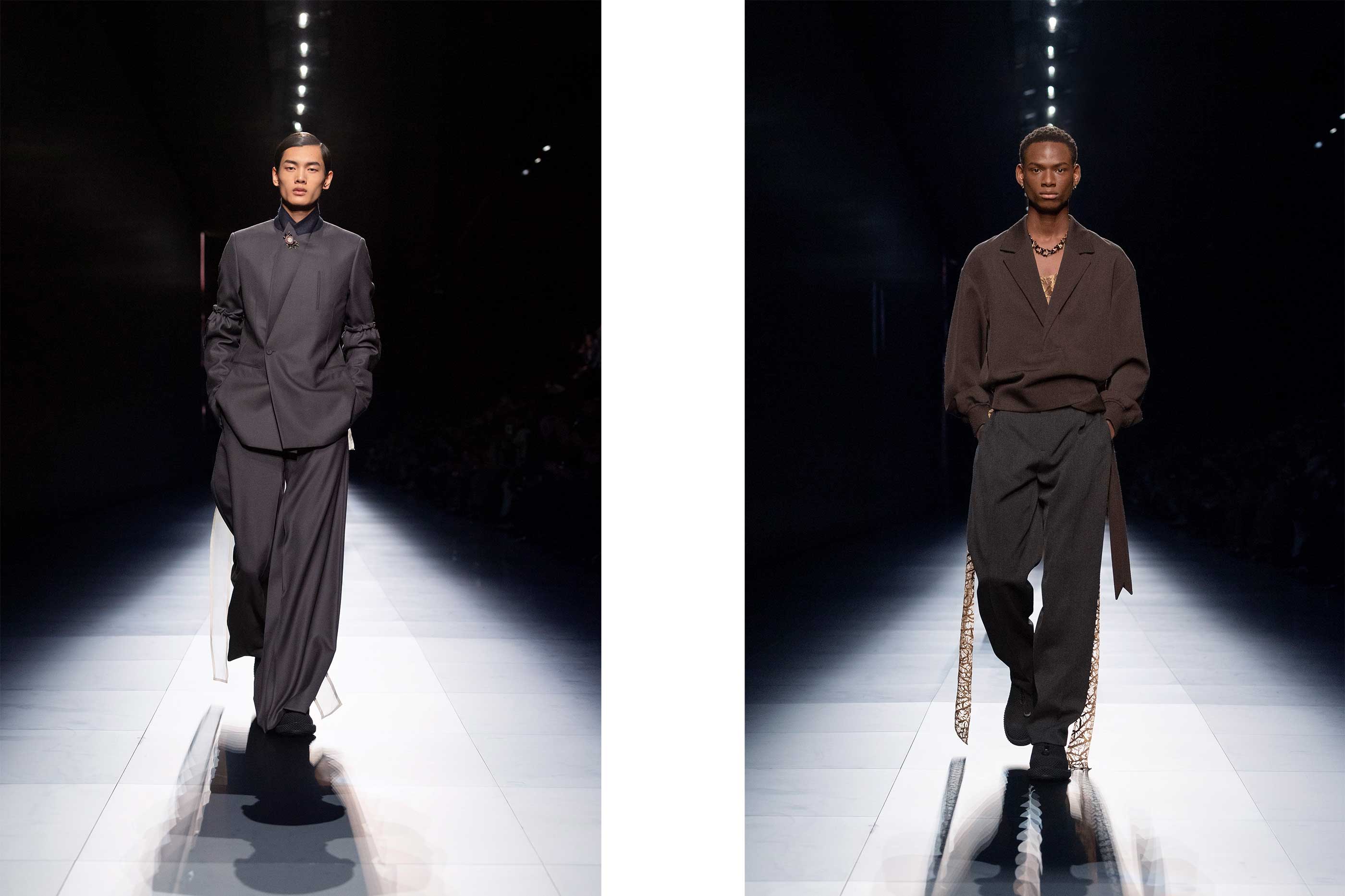 In reference to Yves, the sailor top from the marine ensemble has been loosened in cavalry twill and also becomes an elongated fisherman's smock. There is also a hint of leopard print, spotted in the lining of a trench coat, a reference to one of the designer's most loved prints. The moments were scarce if not hard to spot, but this is what Jones does so well, melding streetwear, like the elongated tweed kilts and baggy wool shorts, with traditional references from some of the world's greatest couturiers. History and modernity – even futurism – become one in Jones' world, time is transcendent and references are up for the taking if treated right. At Kim Jones' Dior, they are always treated right. 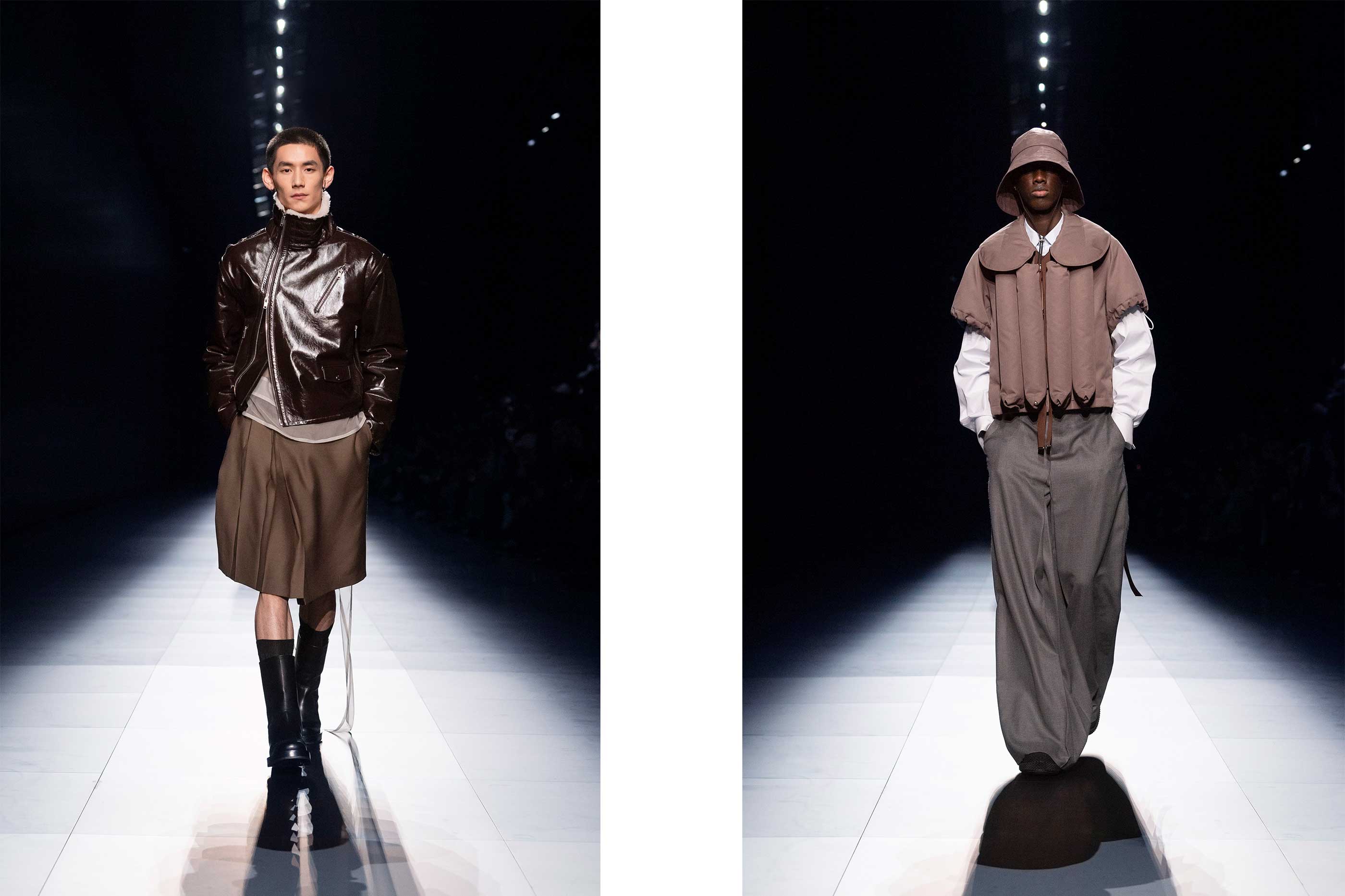