75 is a significant number for the House of Dior this year. It marks 75 years since Christian Dior's inception of the brand in 1947, and notably, was the number of looks artistic director of menswear, Kim Jones, chose for the Dior Men's Fall 23 show in Cairo yesterday.

Jones has always been an avid archivist – after all, it's his ability to pull from codes of the past to cultivate a clear future directive for a brand that makes him so good at what he does – and the Men's Fall 23 show was no exception. As models trailed through the desert in the darkness of an autumn evening, the Great Pyramid of Giza as their backdrop, Jones wove his personal love for the stars through with Monsieur Dior's historical affinity for astrology, and what better location to stargaze than the middle of the desert, flanked by the oldest of the Seven Wonders of The World? 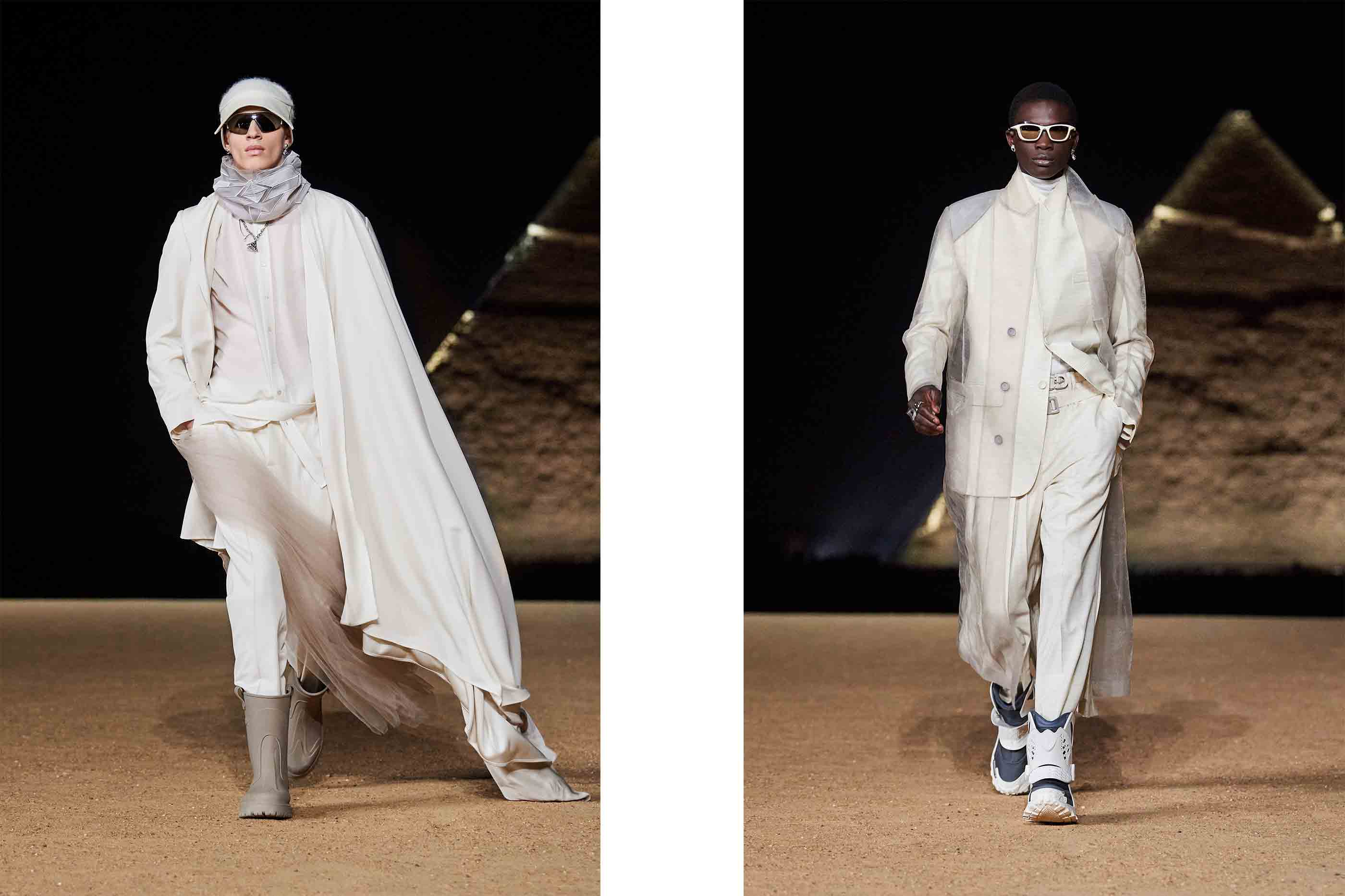 “My interest in ancient Egypt is about the stars and the sky. It’s that fascination with the ancient world and the parallels with what we look at today; what we inherited from them and what we are still learning from the past." Jones said in a press release. "It links to Christian Dior in that sense and by way of his fascination with symbols and superstitions that recur throughout his life and work, one of which is the star. In both the collection and the show there is an idea of ‘guided by the stars’ and what that can entail in many ways. It’s about how the past shapes the future or an idea of the future from the past.”

With so much looking into the past, it's always an impressive feat to witness Jones catapult history forward. Sensibly, there were no overt references of ancient Egyptian culture or even traditionally "Dior" nods to the solar system. Instead, it was retro-futurism and a fascination with technology and sci-fi themes. He worked with NASA on some of the prints, using telescope images to print galaxies onto shirts, jackets, and even tights, signalling a potential return to the galaxy-printed lycra we all thought we'd left in 2013. Naturally, these were more refined than anything on trend back then, and were paired with tailored wool pants, helmets carried under the arms, and combat-style biker boots. 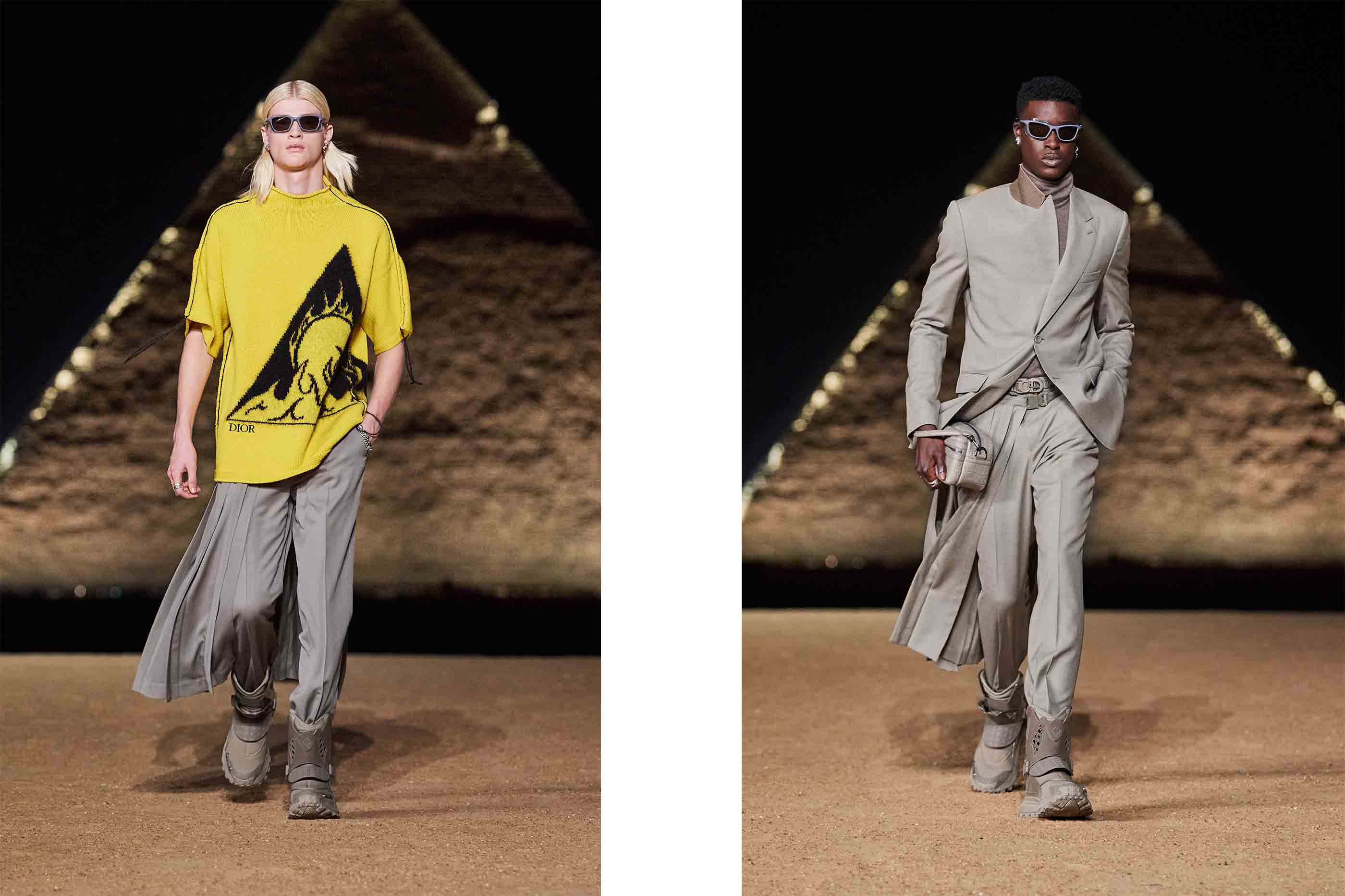 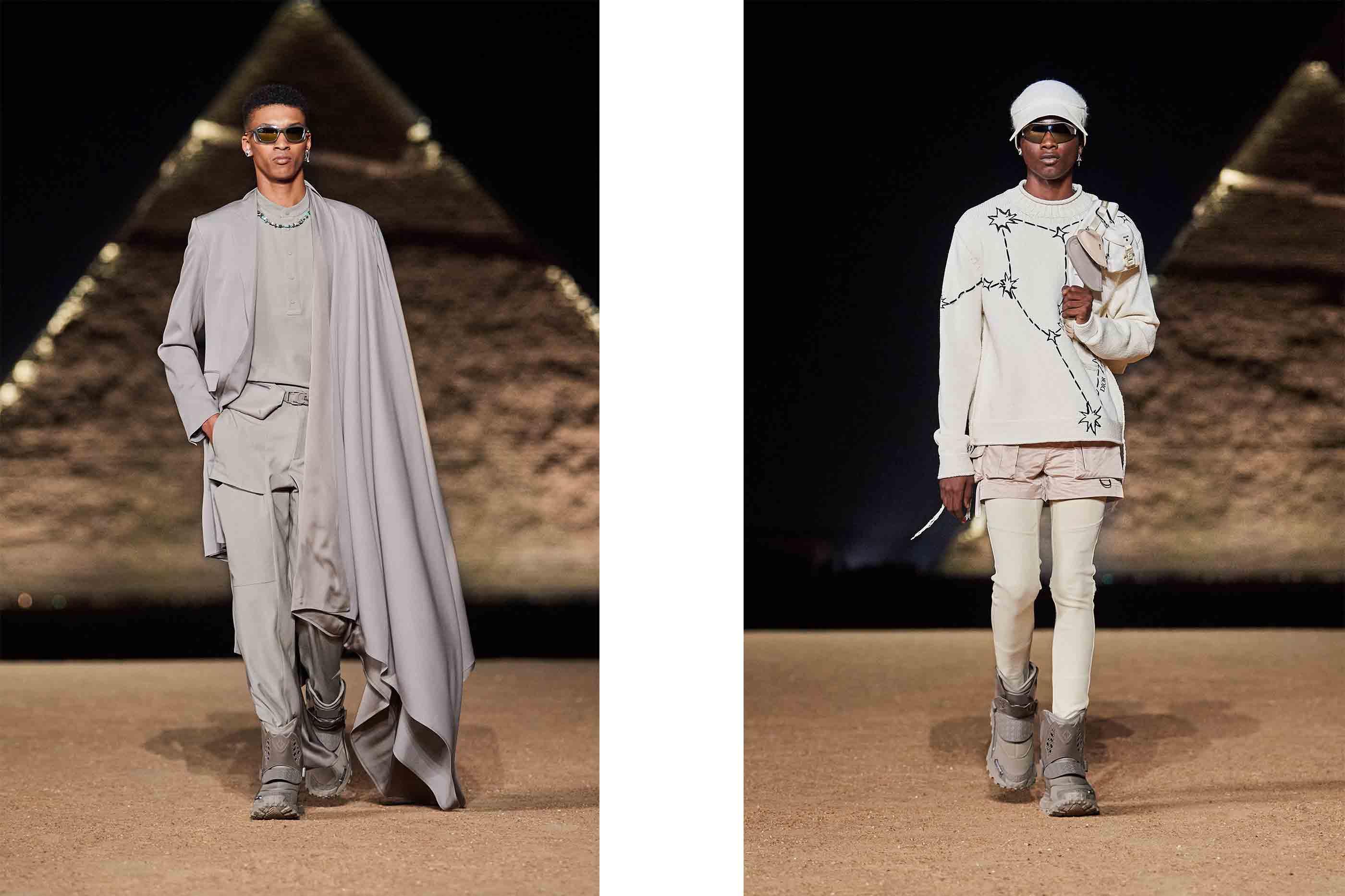 Further forward in the lineup was notable, too. The first few exits opened up to stark whites and greys, while a Dune-like silhouette was explored through looped neck scarves and swaths of neutral fabrics that blew in the desert wind. The fifth exit – a personal favourite – was comprised of a soft tailored cream suit with a half kilt and a grey organza overcoat layered over top, giving the appearance of a kind of space-age invisibility cloak. 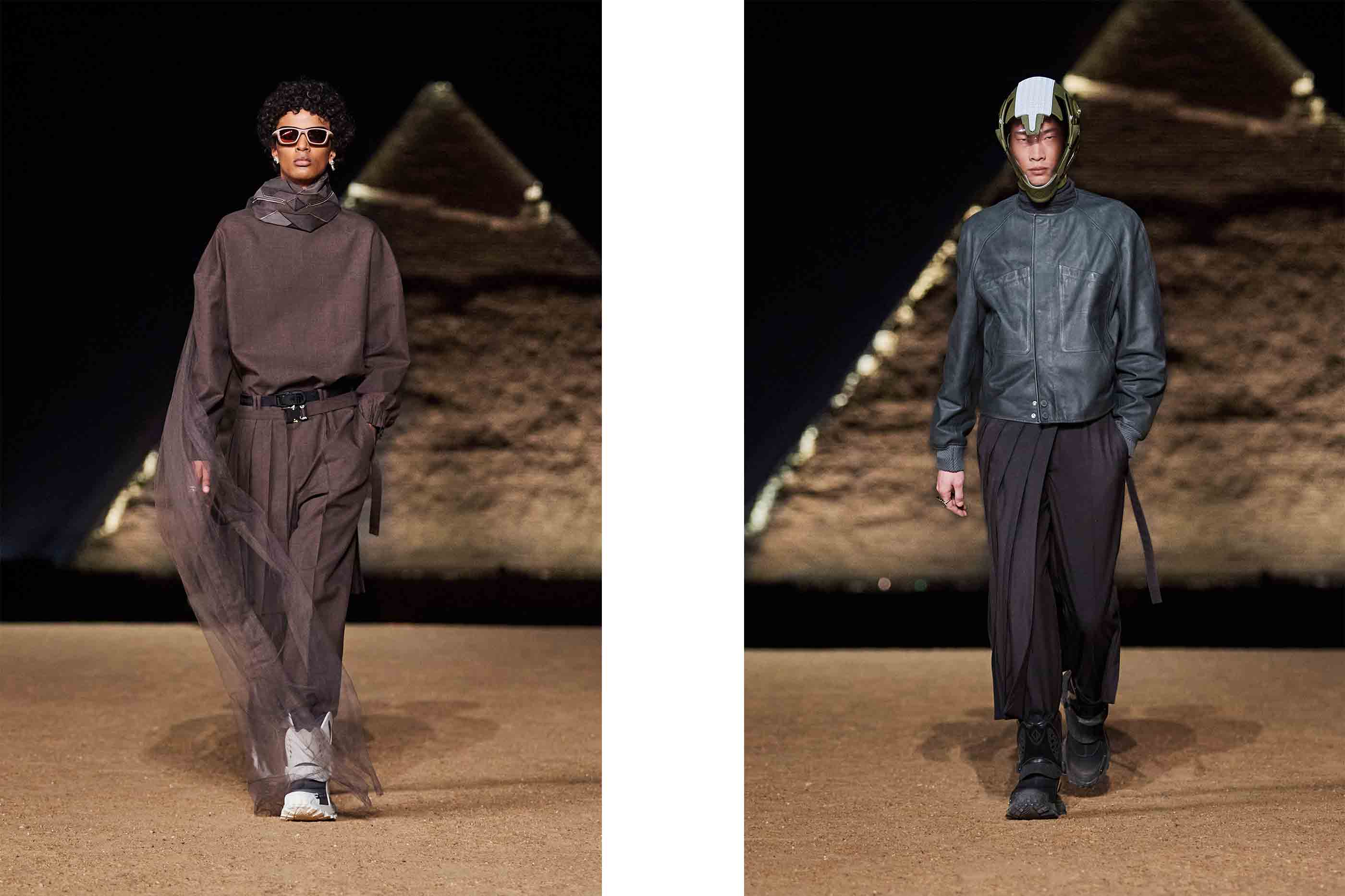 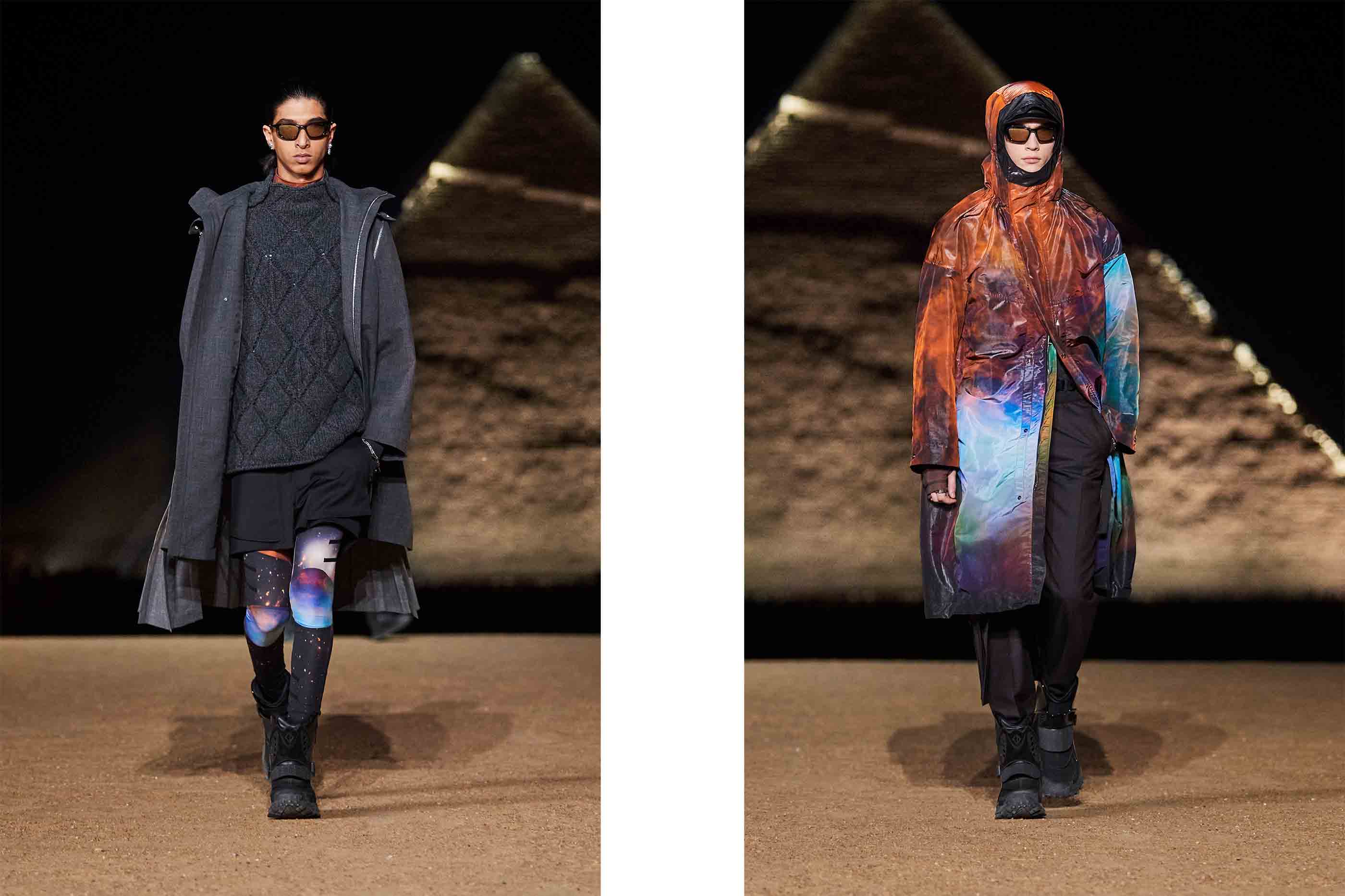 As the collection evolved, colours deepened. The whites, bright yellows, and creams morphed into Dior Grey and muted brown before descending into blacks. The references remain steadfast for Jones at the helm of menswear, who fuses a current vision of the men's collections effortlessly with Christian Dior's New Look (there was even a dress in his debut collection called Cairo). Jones once again offered up an interpretation of the House that works for many, where signature sensibilities are united with techy developments, moving away from any kind of commitment to binaries and towards sensibilities unable to be pinned down.

PREVIOUS
5 fashion moments we loved this week
NEXT
Shalom Harlow: a tribute to the 90s supermodel's iconic style