Bonjour! We are mid way through AW23 Men's week, which is arguably one of the best weeks of the year for those who prefer a masculine silhouette. The week kicked off with the inimitable Martine Rose, whose first international show, held at the Piazza del Mercato Nuovo saw a latest update on her viral Nike Shox collaboration and a fresh take on her classic silhouettes. There were half-skirted tailored jackets and the lowest-rise pants with satin shirting tucked into the barely-there waists. Another triumph for the London designer on everyone's minds.

Elsewhere, Fendi presented swaths of cozy greys and chocolates with a relaxed and playful approach, while Jonathan Anderson's surreal show worked in tomato tattoos and the froggy wellingtons we had in our youth. Saint Laurent redefined the phrase "painfully chic", while Grace Wales Bonner debuted an intellectually charged collection filled with romance. We had ample notes on Prada, as well as Gucci since all eyes were on the House's post-Michele debut.

We're not yet at the end of the season, (we still have Colm Dillane's Louis Vuitton show to go, and Bode's womenswear collection to see) but if what we've seen so far gives anything away, good lord, the best is yet to come. See our favourite moments from AW23 Men's week, below. 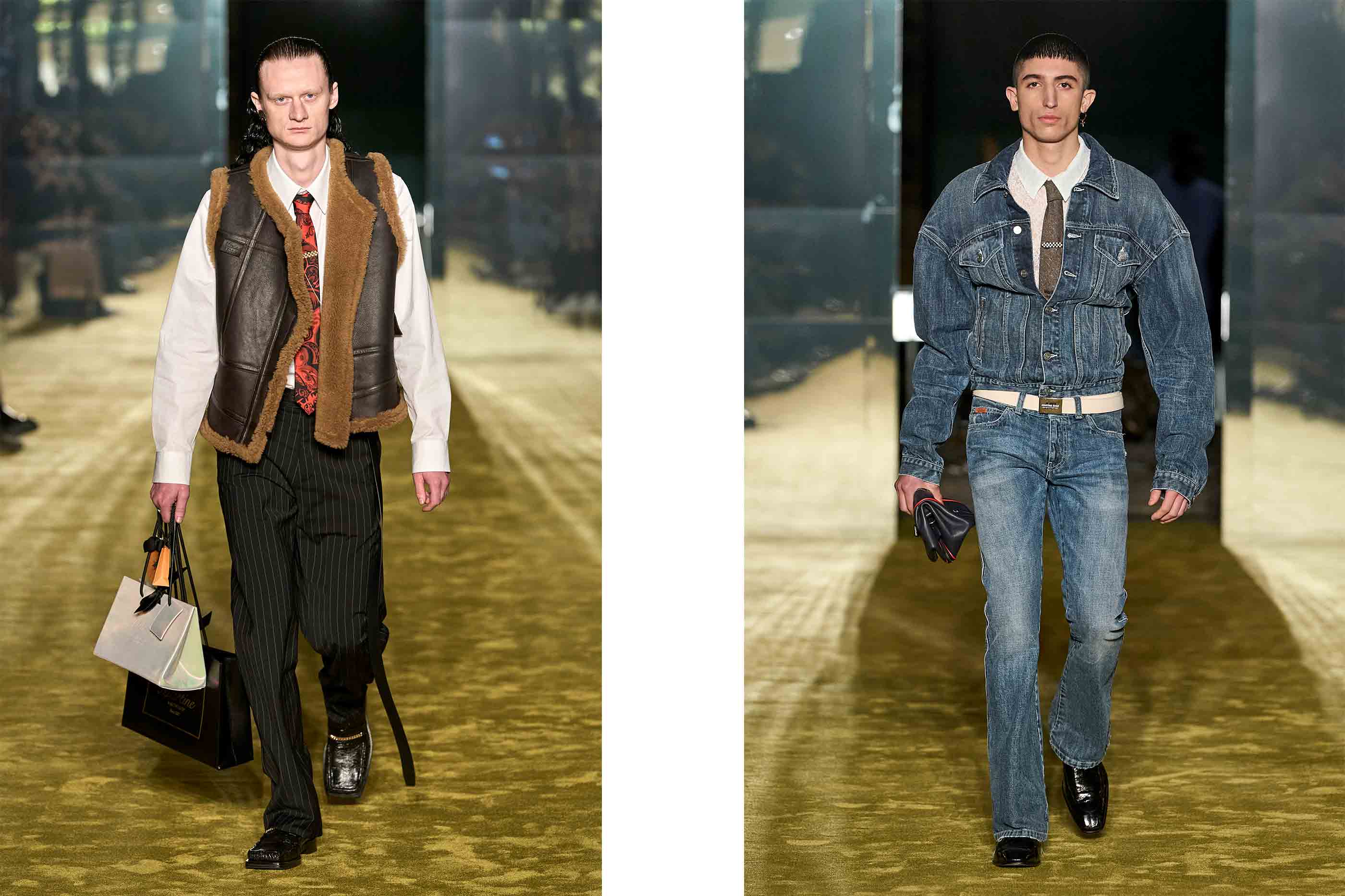 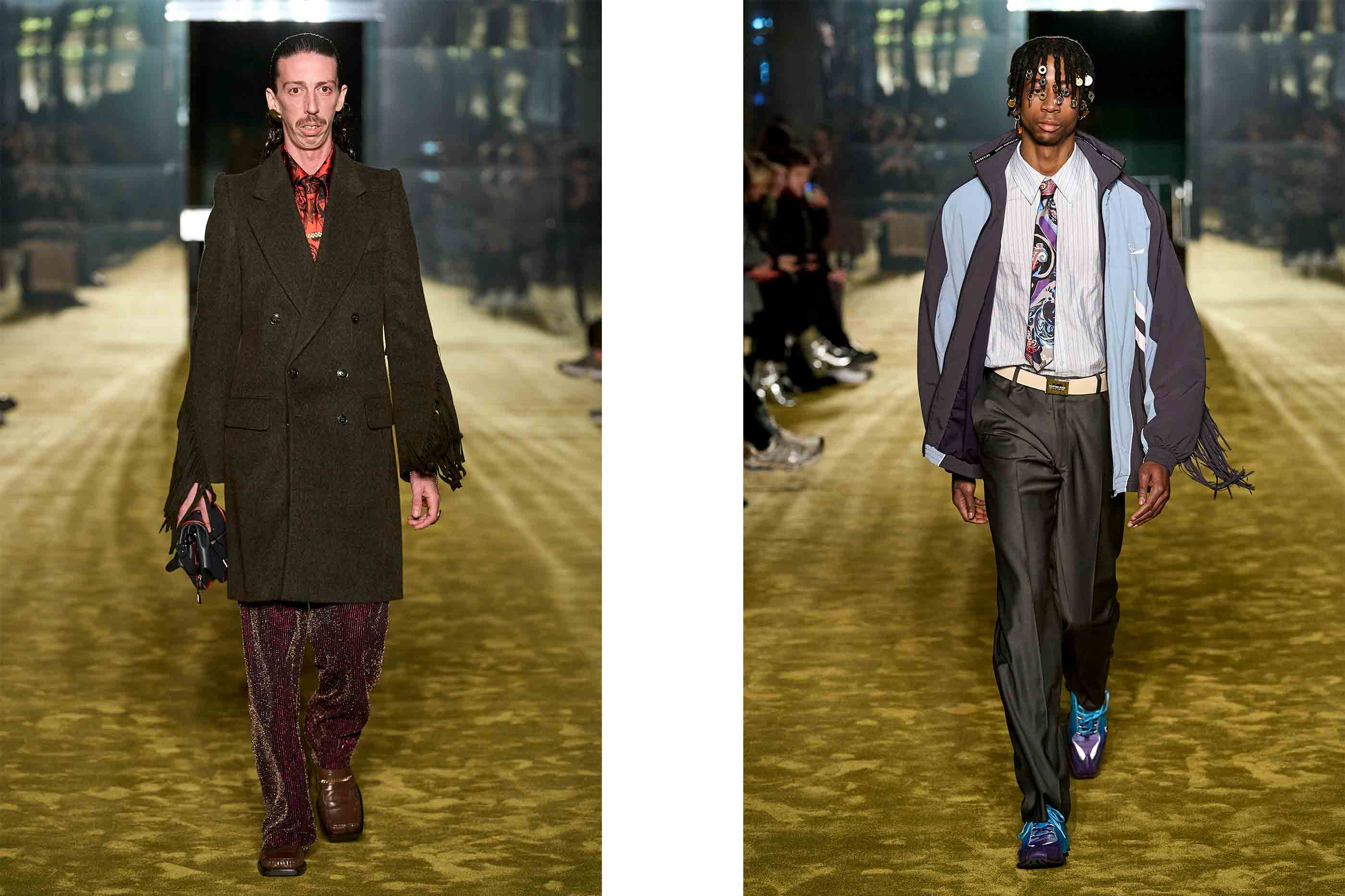 Italiano Disco, 80s and 90s London, Martine Rose's debut show outside of her hometown, London, was one to remember, and offered up the aforementioned themes in droves. It is rare that Rose should miss a beat, and her Fall 23 menswear collection kept her track record straight. There were tailored jackets with fringing and her signature chisel toe shapes (which appeared on blue versions of her Nike Shox collaboration). Waists were nipped in while shoulders bowed outwards, layered over shirts and ties and punctuated in between with puffy-shouldered knit vests. It was London lad meets Italian glamour, and Rose's silhouettes are stronger than ever. 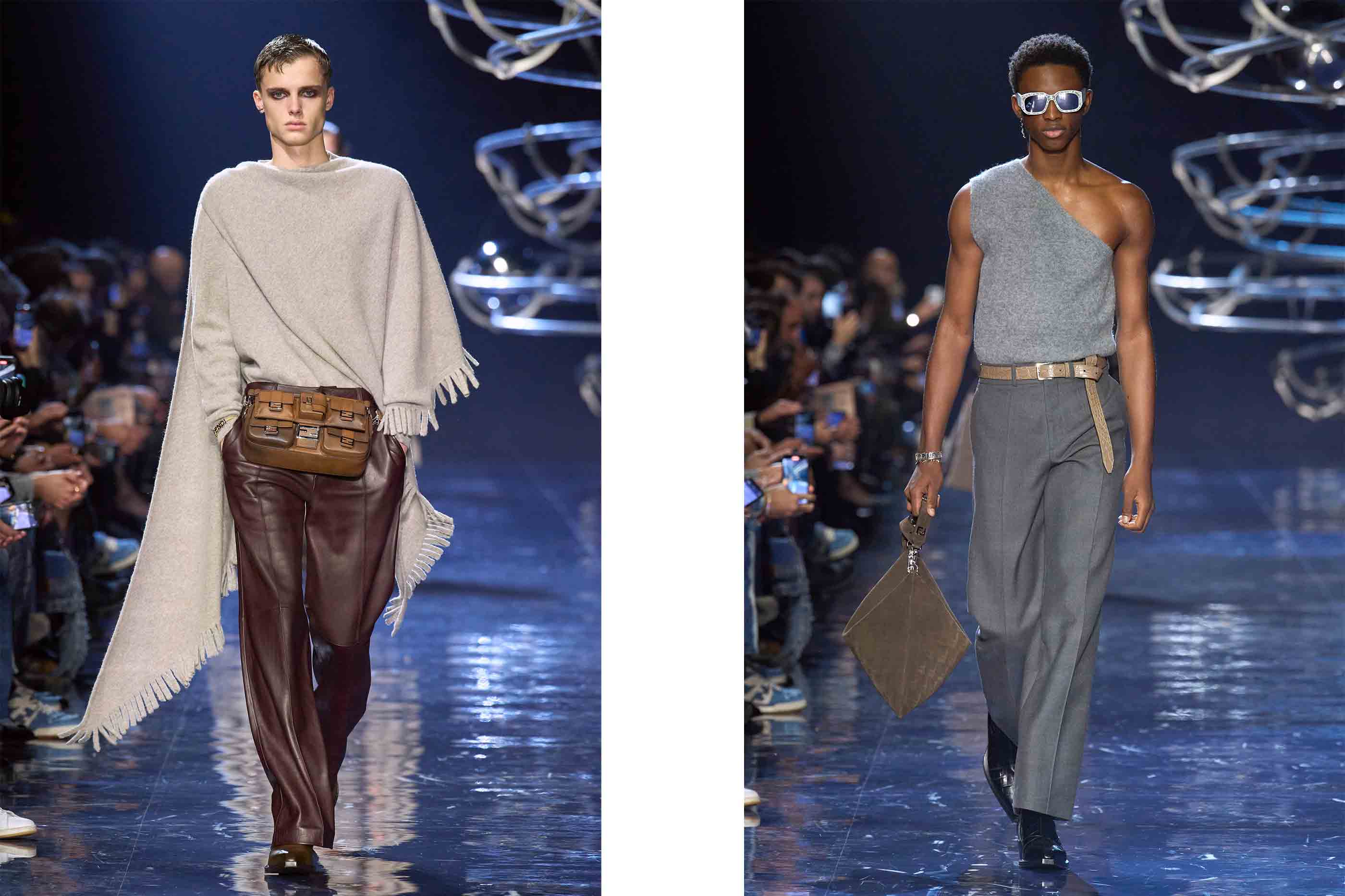 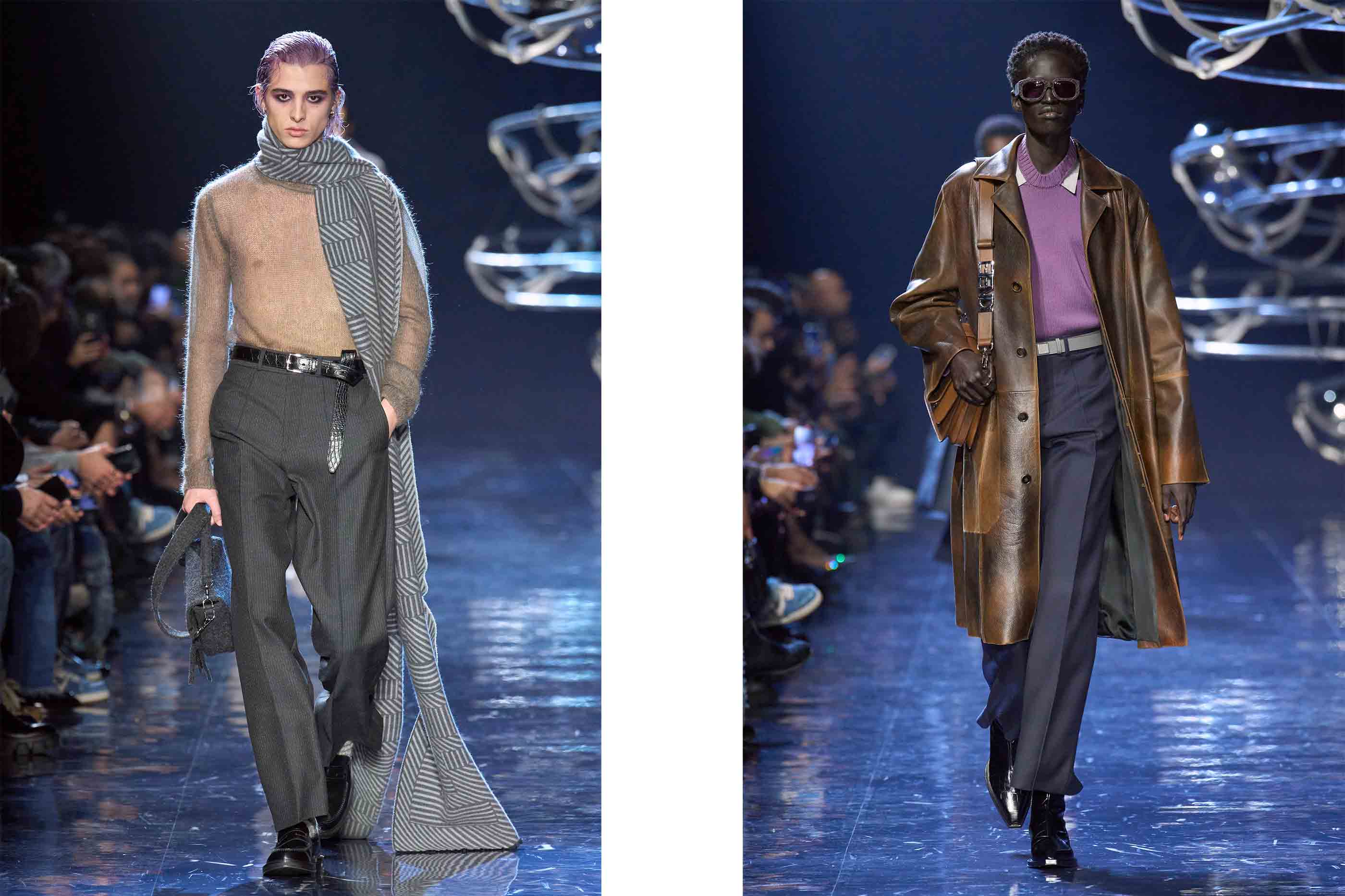 Martine Rose wasn't the only one in search of disco last week. Silvia Fendi was seemingly right there beside her. For her namesake brand's Fall 2023 show, Fendi offered up relaxed, fun, coziness like they did in the old days, and offered stylistic references good enough to get anyone excited for autumn. "Cocooning" is the word that shot to mind upon the first exit, and hung on the mind as the looks emerged onto the runway. There were one-shoulder knits and chocolatey leather pants; oversized, Lenny Kravitz style scarves were flung around necks atop open weave cashmere pullovers while long, precisely tailored coats all but swept the floor. It was pure indulgence, expertise, and fun. 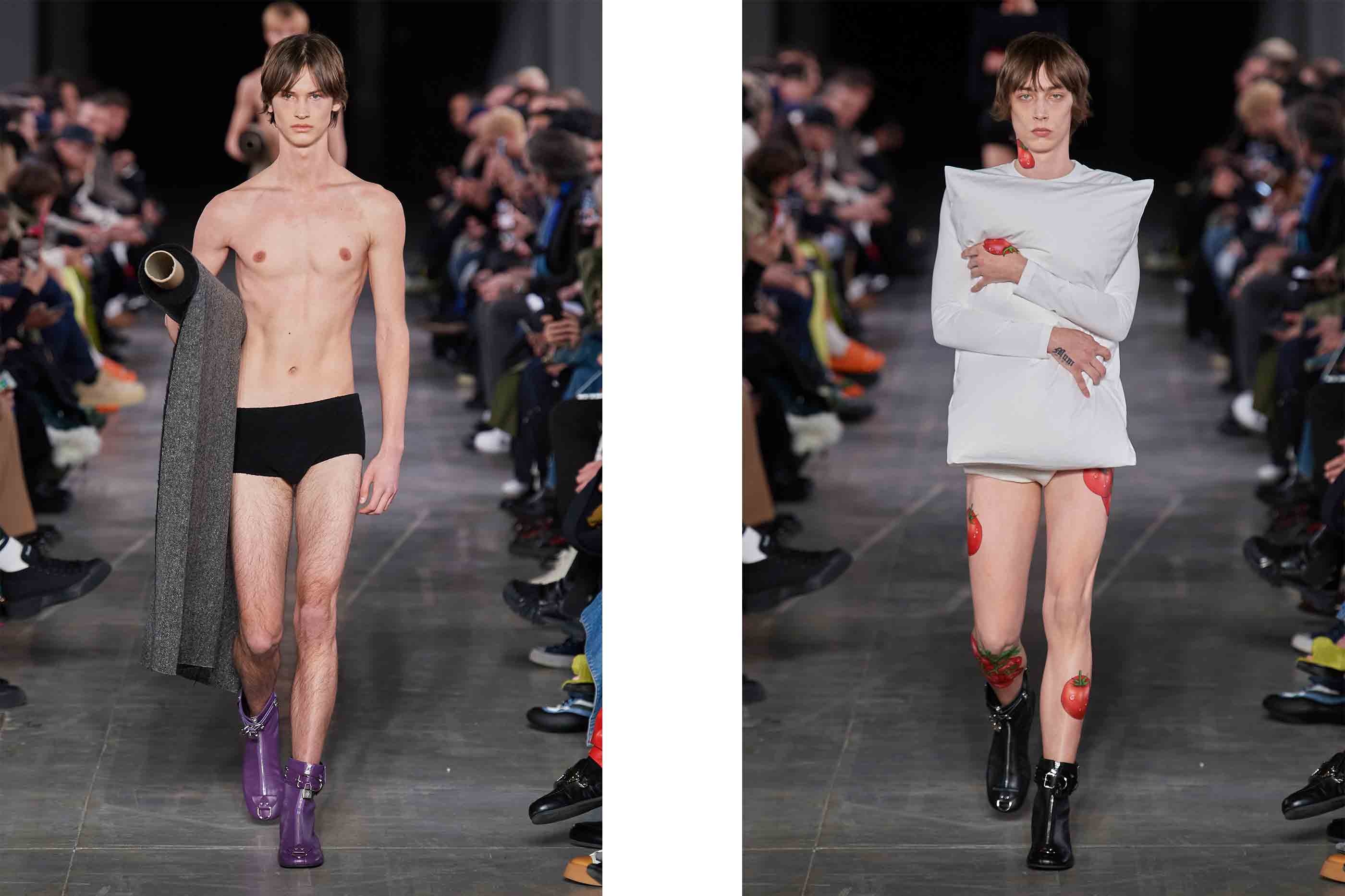 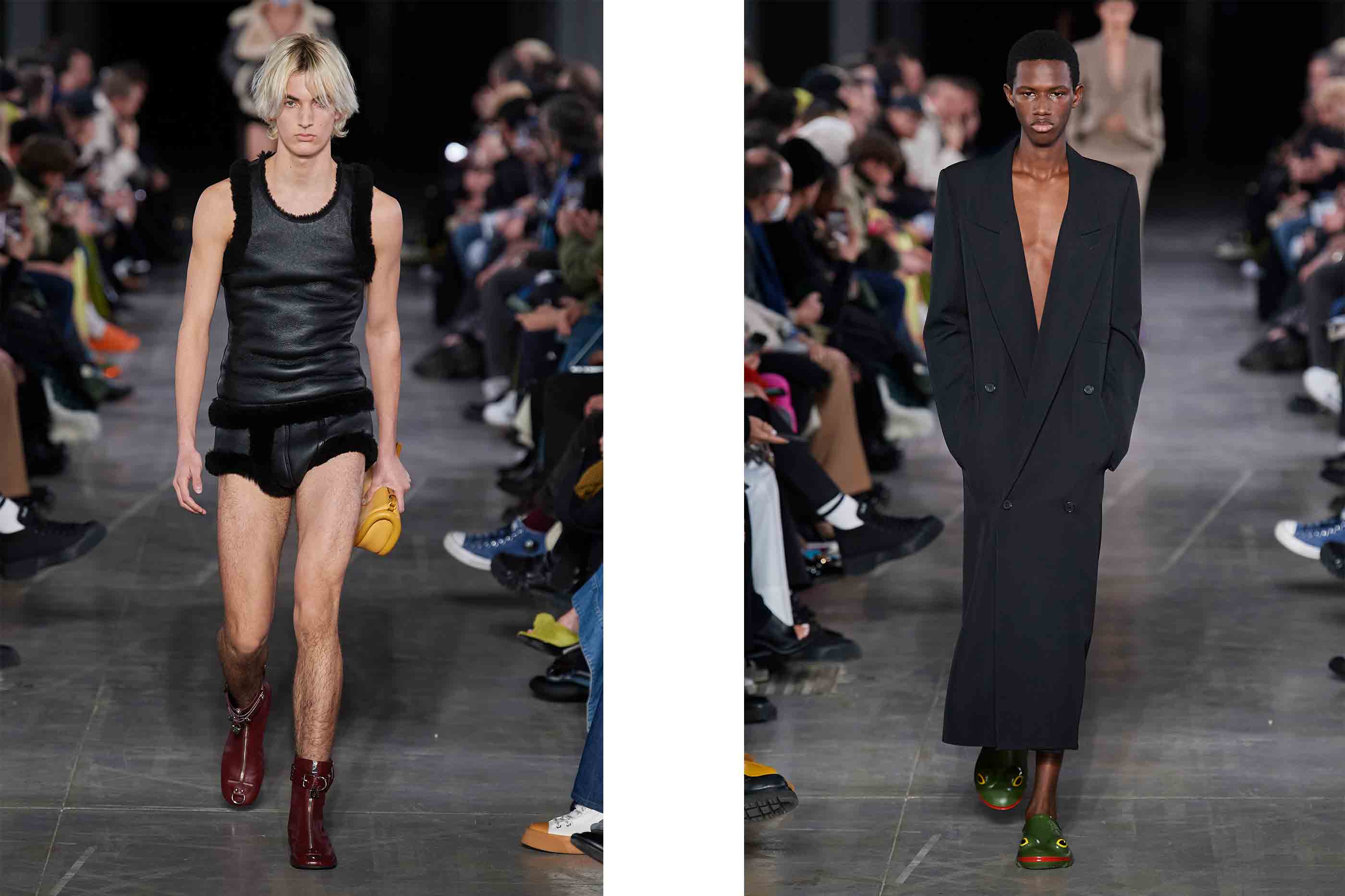 What fun it is to experience Jonathan Anderson's current reign on surrealism! This time, notes on gender permeated the collection, and the rather arbitrary roles they still hold in society. Models emerged first wearing underpants and holding bolts of fabric, before two more arrived on the scene covered in tomatoes, clutching pillows (like that strange instagram trend we saw in 2020). Frog-faced slides and boots by Wellipets were clad on fully-grown feet (a first for the kids only brand), while androgynous torsos were printed onto t-shirts and terry vests. Anderson once again injected fun into everything he touches. 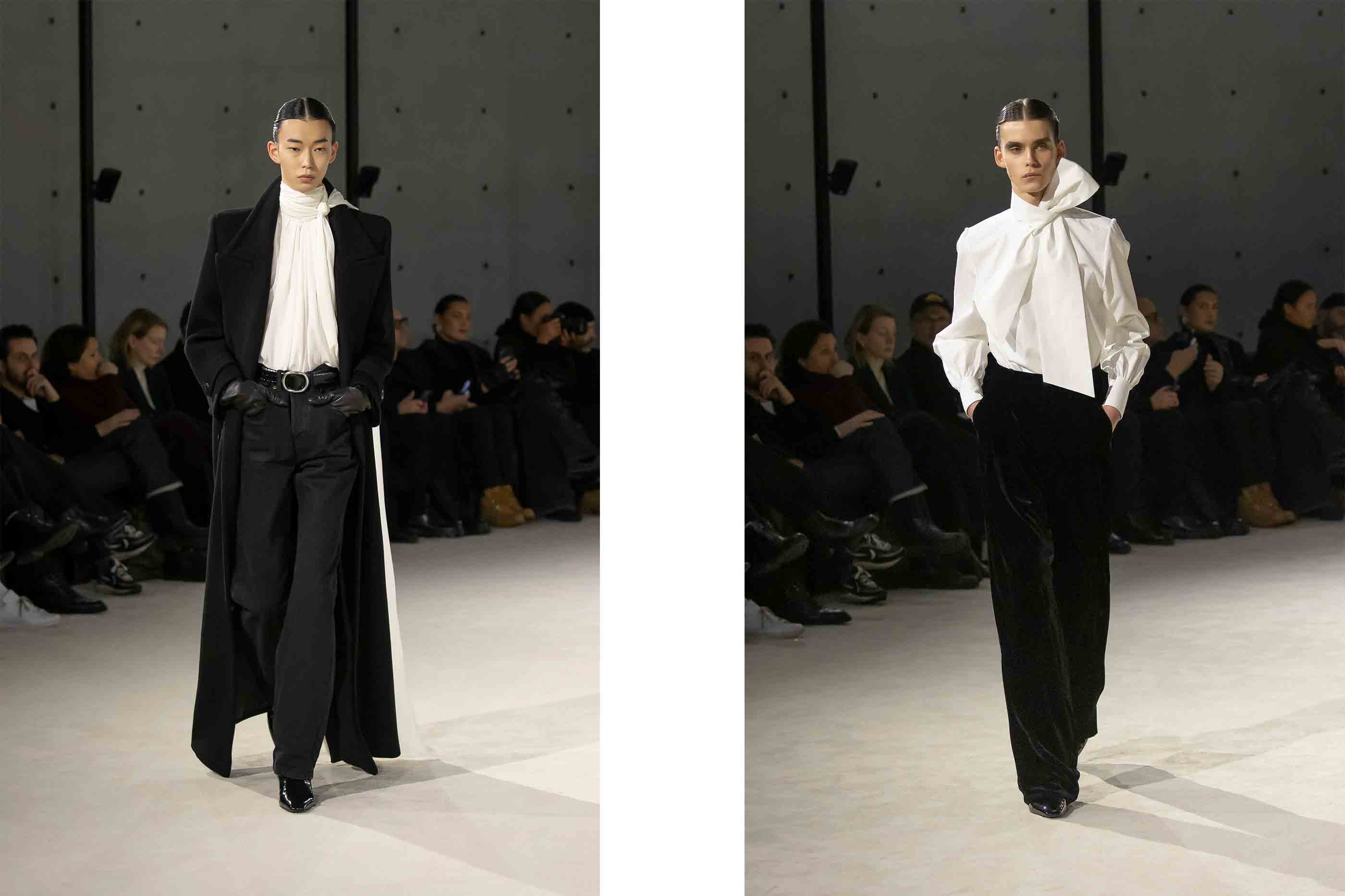 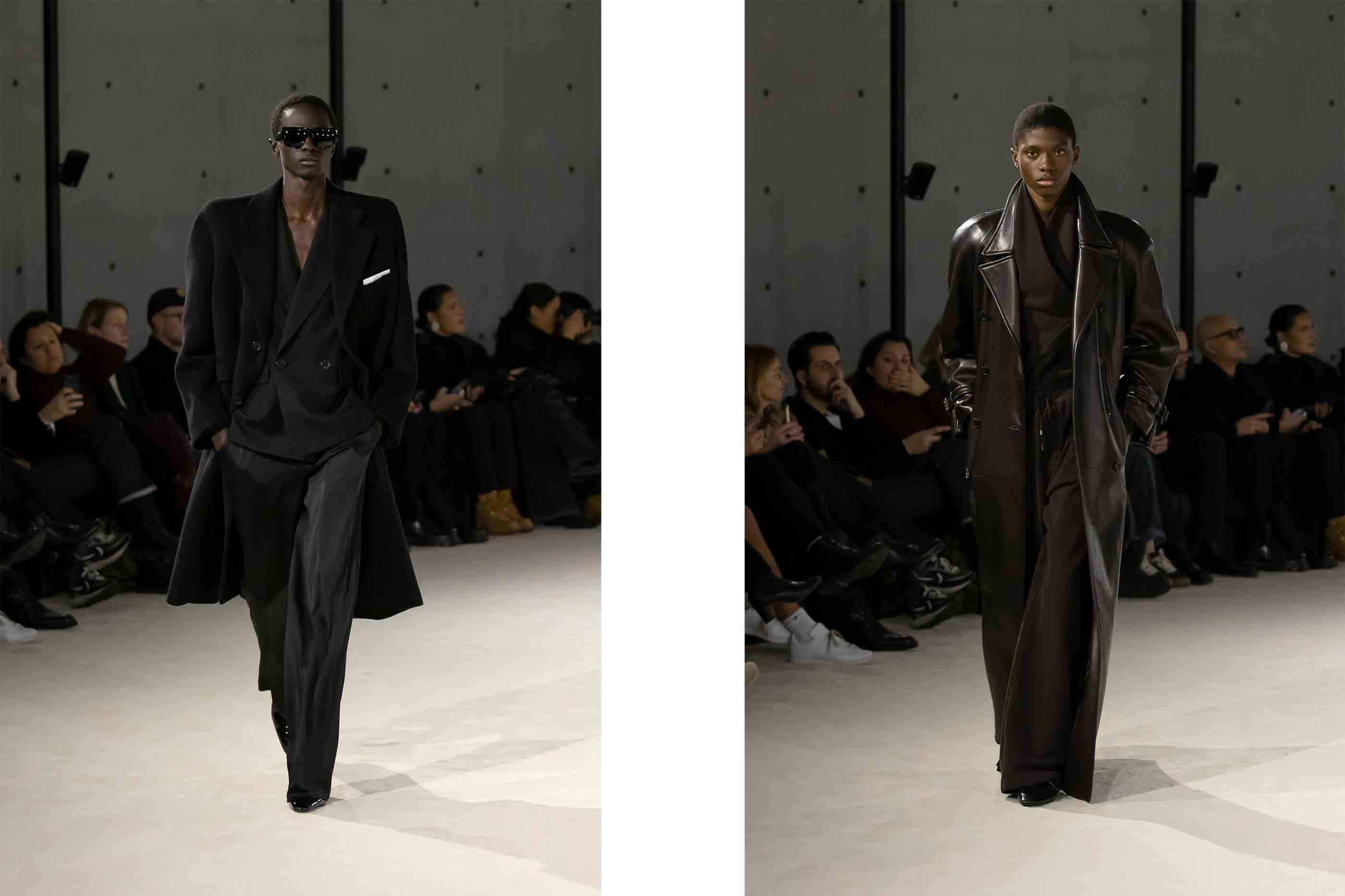 Speaking of androgynous, Anthony Vacarello's exploration sat on the other end of the spectrum, and was one of the most stunningly beautiful of the week so far. Vacarello's vision for Saint Laurent felt rounded out yesterday as he showed his Fall 2023 collection. It was a genderless amalgamation of the silhouette's we've been seeing at the women's shows these past seasons, adopted and tweaked so that the two become one. It was the definition of decadence, of drop-dead elegance done almost shockingly well, and expertly cut (as is Vaccarello's biggest strengths). Precision was present straight out of the gate: the first exit a pair of stark black tailored trousers and a crisp blouse with an oversized starched pussy bow. Narrow coats swept the floor and necklines either crept up over the chin or plunged into draping. It was an entirely monochrome collection, yet nothing was lacking. It was a perfectly on-brand display, but one that felt so modern and, quite literally, stunning. 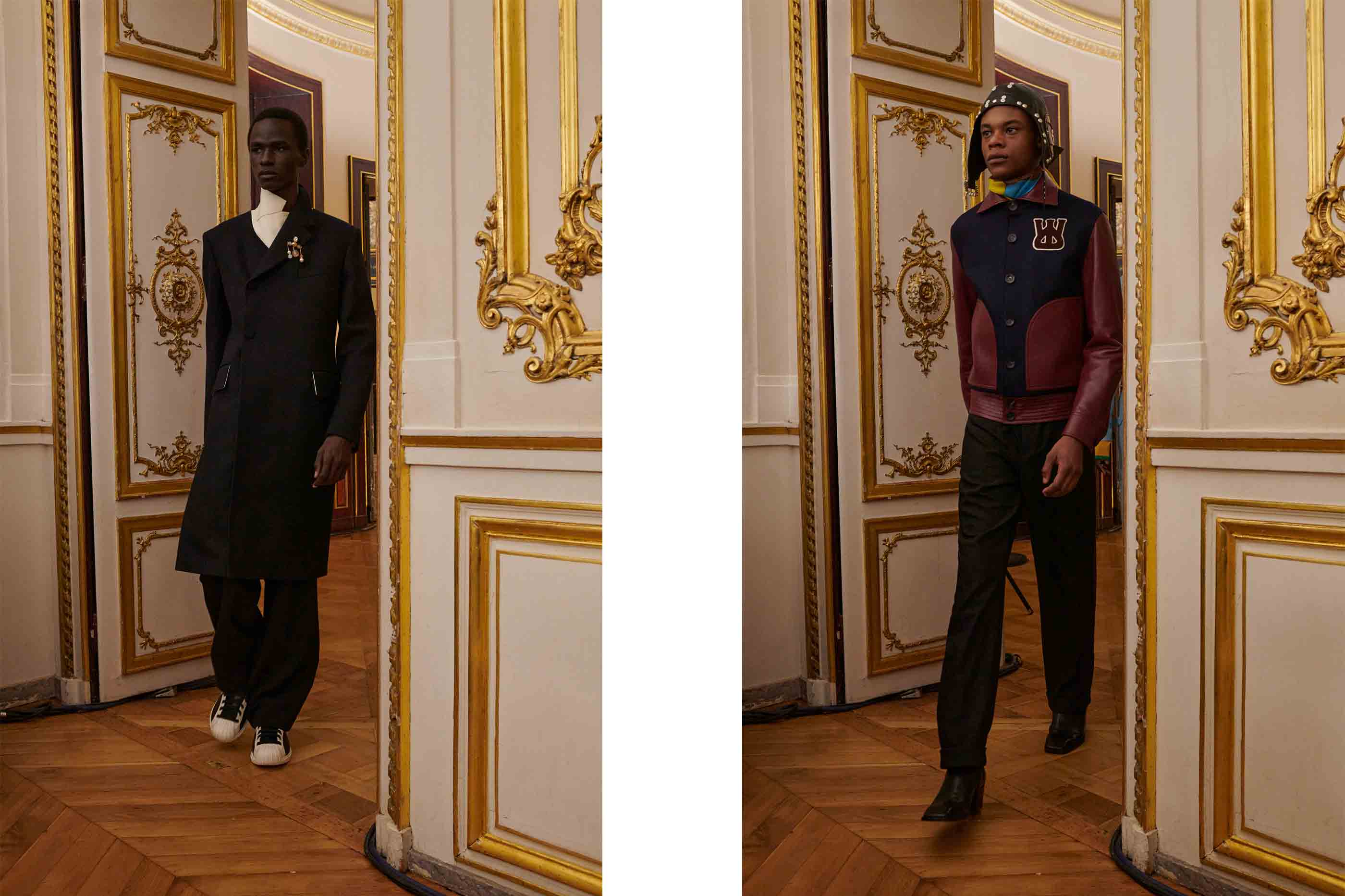 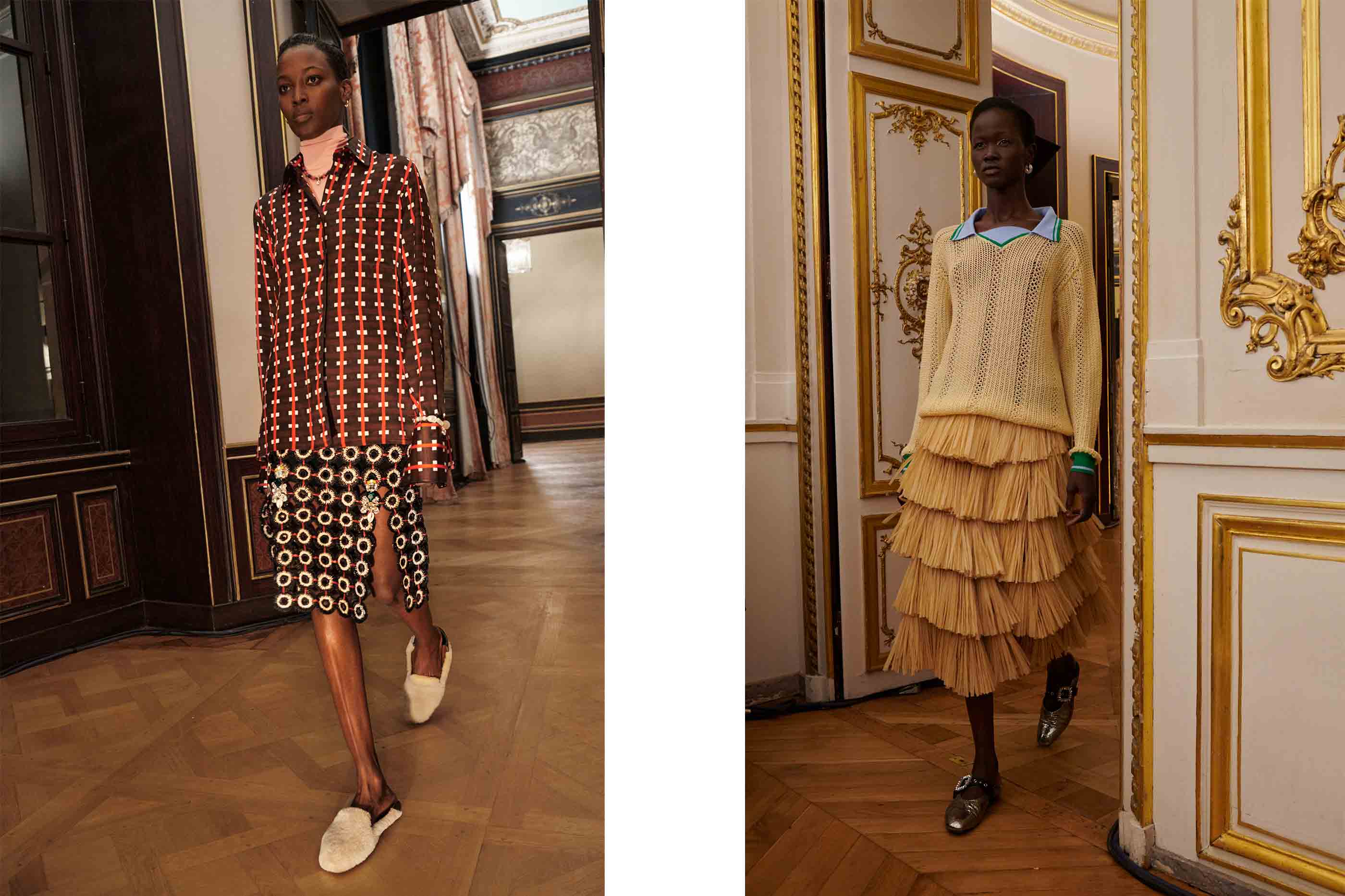 Grace Wales Bonner made her entry into Paris yesterday, at the Hotel D’Evreux, a grand, decadent space filled with gold painted moulding and herringbone floors. The collection matched the atmosphere. Inspired by cultural heavyweights like James Baldwin, the Maharaja and Maharani of Indore,  and activist Josephine Baker, the collection was a joyful and thoughtful progression for the brand. Relaxed suiting, marle knit dresses and crochet skirts adorned with cowrie shells were all on display, alongside reimagine football jerseys and leather bombers. On multiple lapels, vintage style brooches added a sense of old-world glamor. It was another win for Bonner's namesake brand. 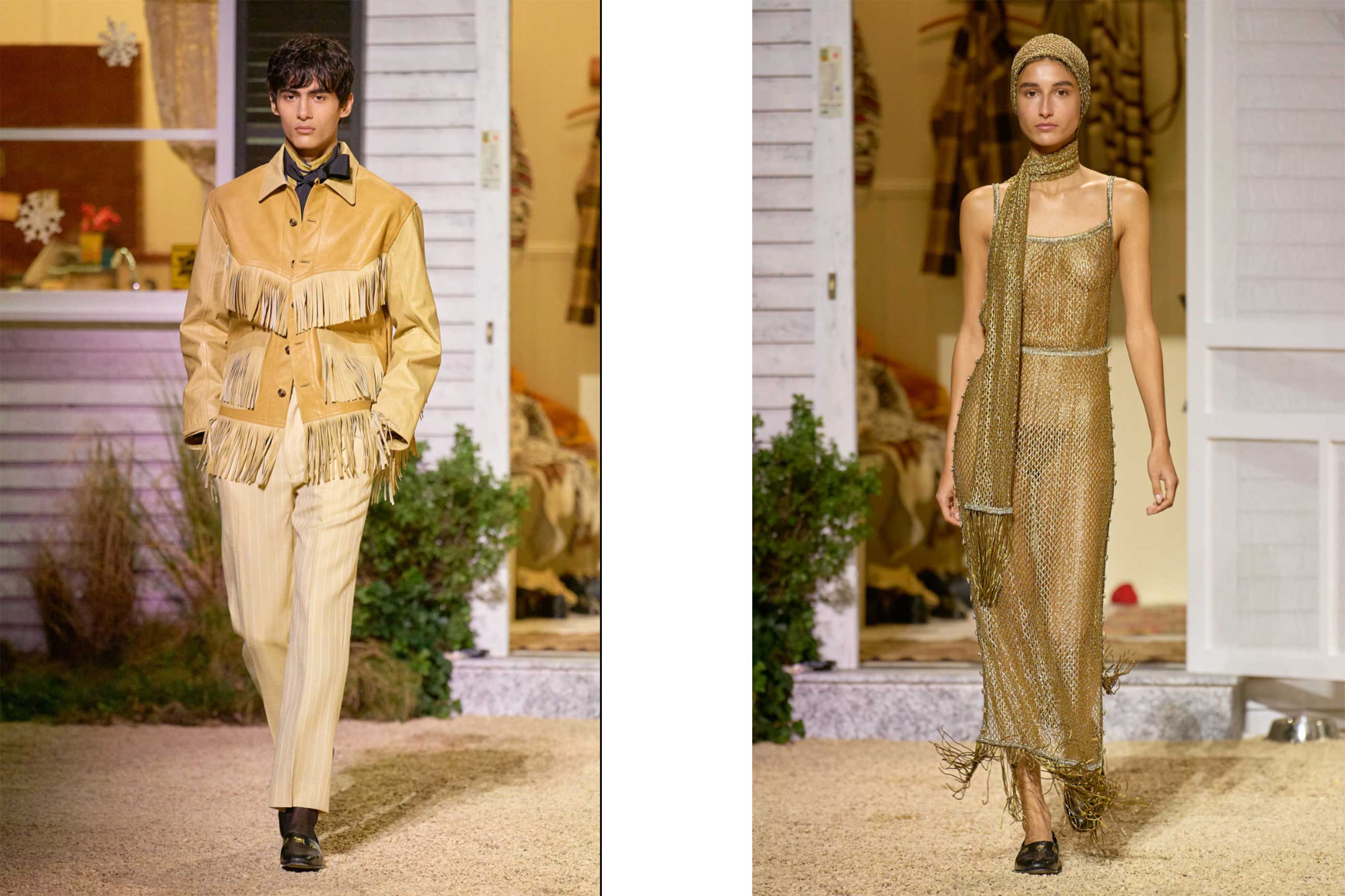 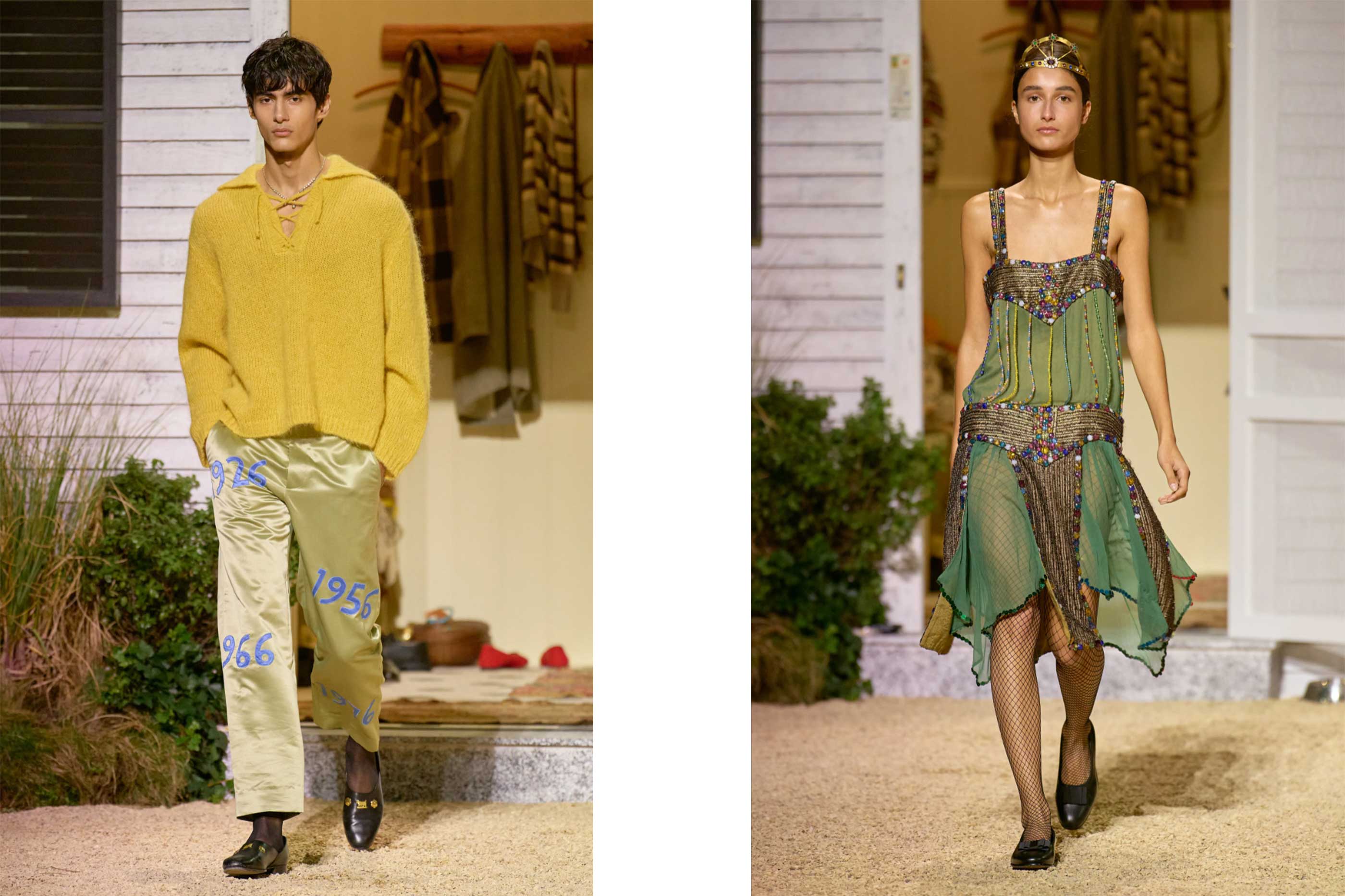 Emily has arrived in Paris! And it's a lot more visually appealing than the viral television show. At Emily Bode's namesake label's Fall 2023 show, the designer debuted her first womenswear collection in the brand's history at the Theatre du Chatelet in Paris.  The whole affair was a shimmering success, literally and metaphorically. Paying homage to her American family roots, Bode's first womenswear collection was a refreshing amalgamation of sequins, silks, velvets and cottons. It was everything you want out of a ready to wear collection these days. Chock-full of pieces that can stand on their own but infinitely better when styled in the Bode universe. There were nods to the flappers and traditional Western garb, evening wear that flirted with the 30s and 40s and pieces to stroll to the coffee shop in. Most of all, it proved why Emily Bode was bored with making womenswear all those years ago in design school: she is expertly good at it. 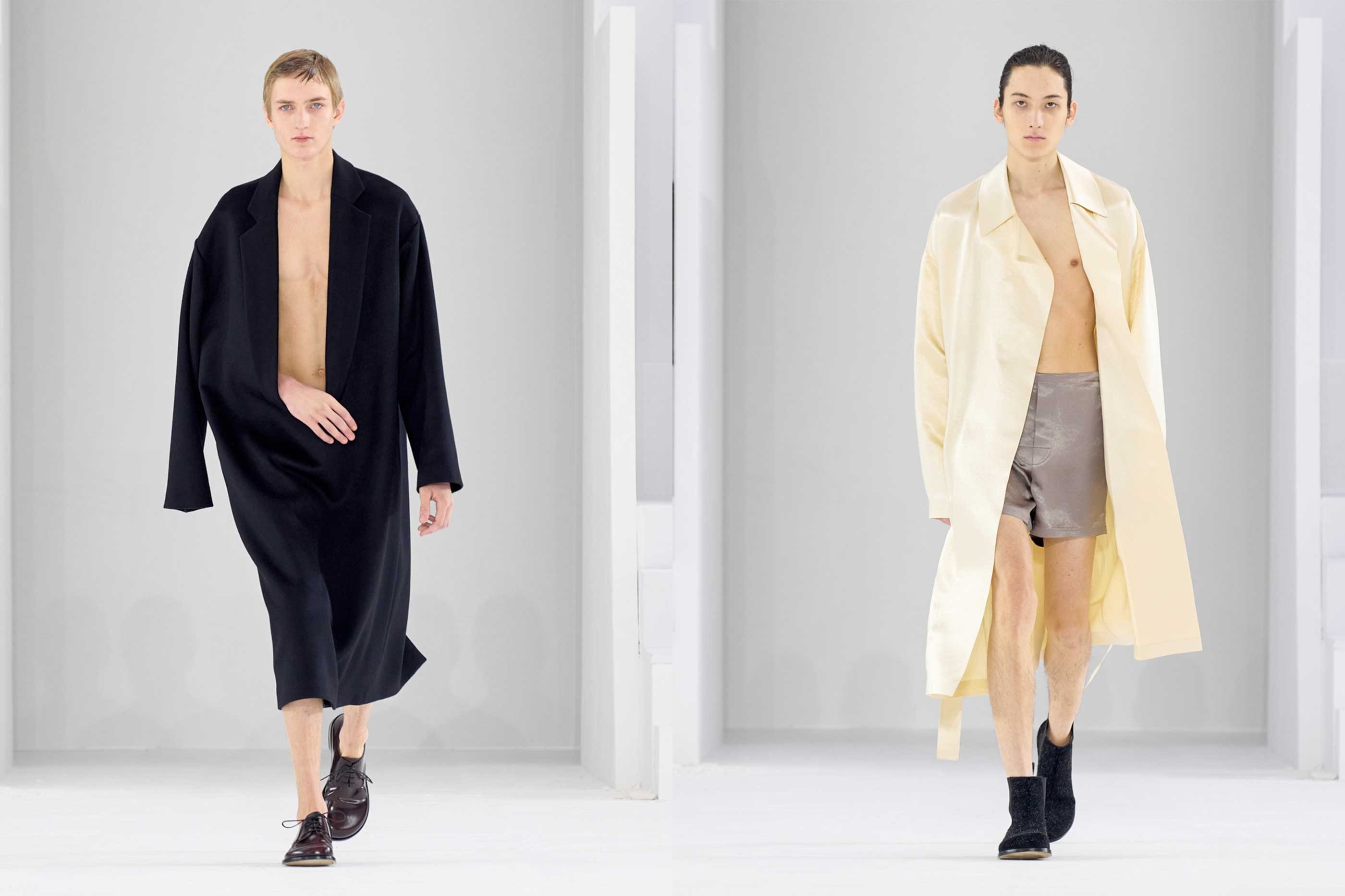 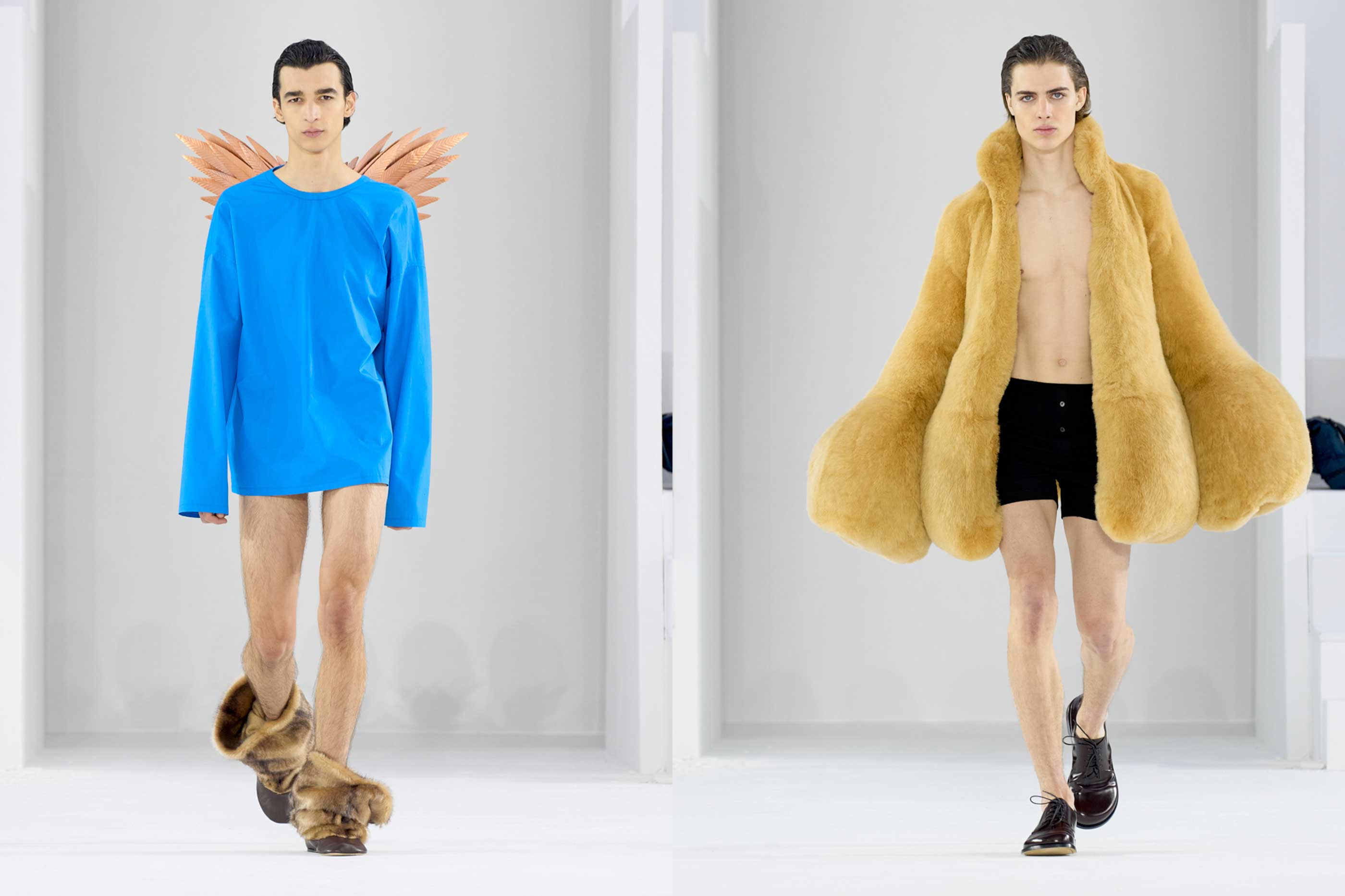 Of late, it has been feelings as though, especially during show season, brands are doing a lot of talking about anything but the clothes. Recently, as the fashion landscape finds its post-pandemic feet, it has wriggled amid the spectacle of performance and virality, keeping up to keep up, saying something to say something. This season, at Men's week, the dialogue seems to have shifted, or at least begun to. At Prada, Raf and Miuccia made a very clear point that the clothes were to be the focus. At Loewe, it feels as though this has always been Jonathan Anderson's motive. Described in the show notes as "a reductionist act", Anderson's exercise in restraint was on full display for the Men's Fall 23 show. It was move away from 90s minimalism, defining its own category of modernism perfectly.