The first exit at the Gucci Fall 2023 Men's show made a statement. It was one that was semi-expected for those who have been intently following the brands trajectory in the wake of Alessandro Michele's exit late last year. In the middle of a round runway sat Marc Ribot’s Ceramic Dog, and as the band started to play, a double, Tom Ford era style spotlight focussed upon the first look out: a white t-shirt with billowy, oversized chinos and a black beanie. 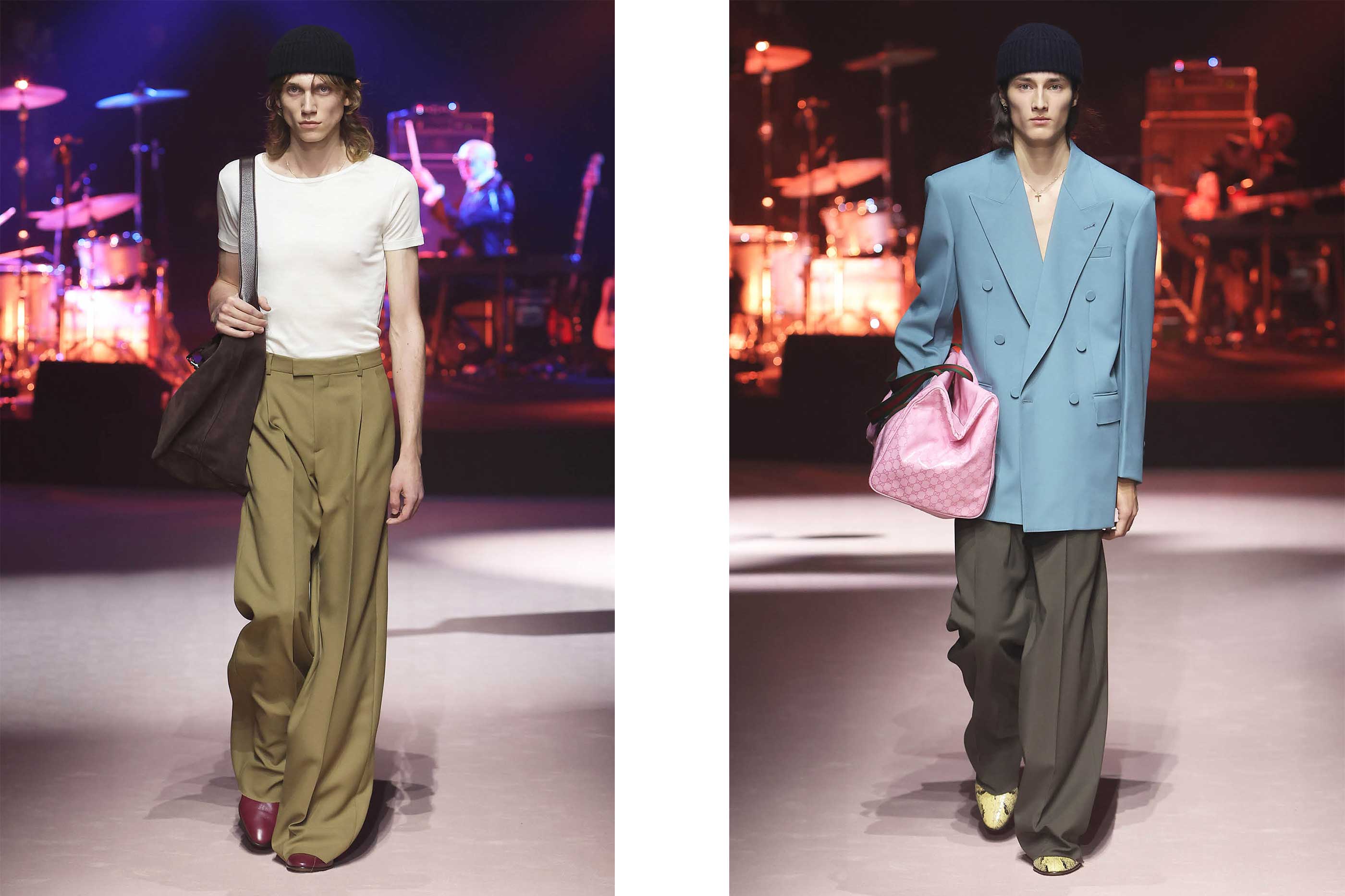 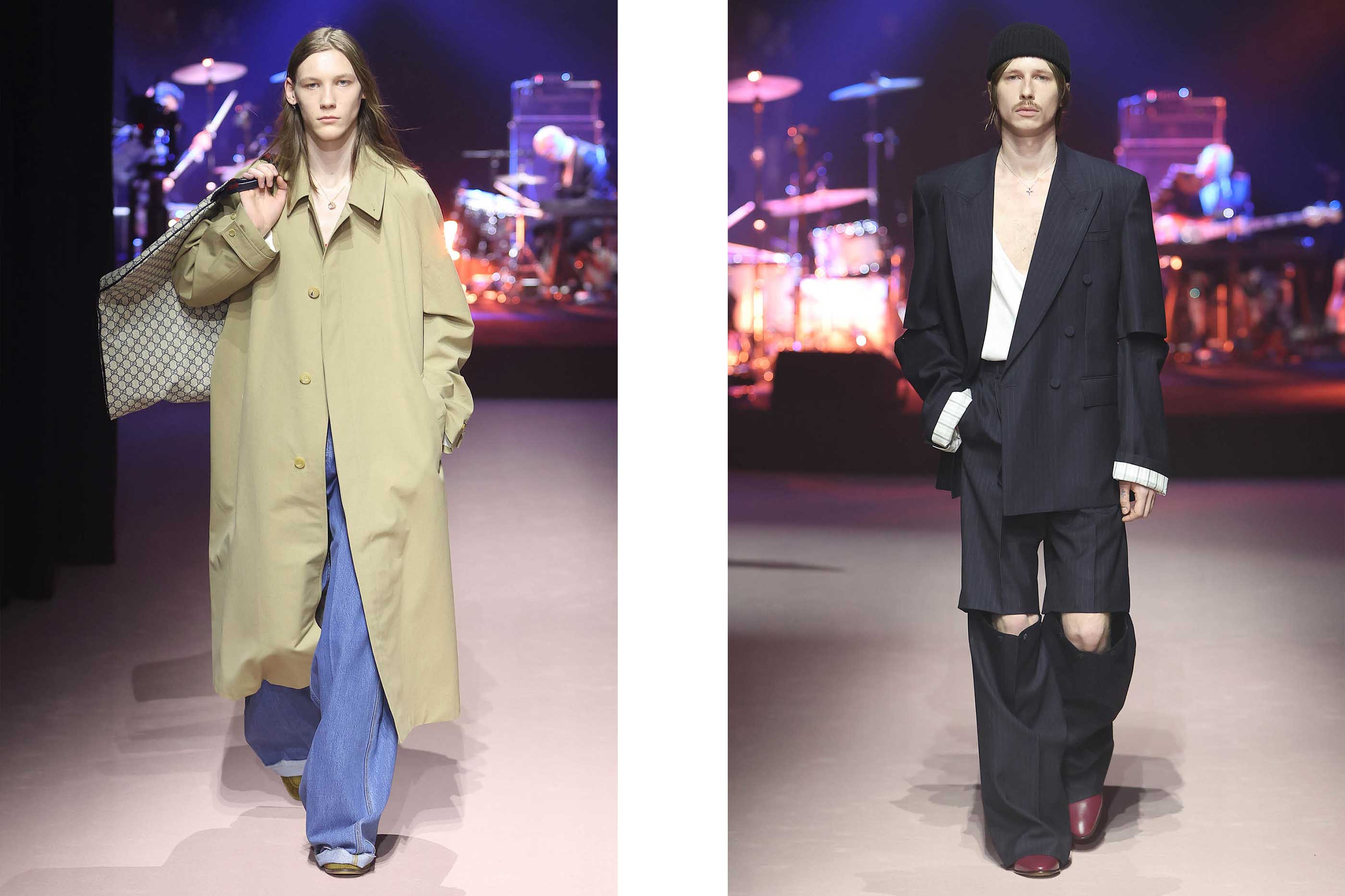 The idea for the collection was improvisation. One that, with the hotly anticipated knowledge of Michele's successor still kept under wraps, felt like an astute theme to riff upon. Gucci have always been self aware. From the first exit, it appeared as though the brand really did intend to revisit Ford's unforgettable tenure. There were slouchy suits paired with deep, skin tight scoop necks and slouchy hobo bags, patchwork low rise jeans, and leather motorcycle pants that seemed to be pulled from Ford's Fall 2000 collection; But as the show continued, it became evident that Ford's era wasn't the only one considered.

The brand's coated canvas monogram from the 70s was there, as well as sportswear motifs from the 80s and the 1953-issue logo, and as the collection evolved, a sense of circulation emerged (and not just because the runway mimicked the shape). Reinterpretation and improvisation were the buzzwords, and Gucci's creative community was the sounding board. In some ways, it felt like a collection "for" instead of "because", looking outward at those who have shaped Gucci's creative journey so far and manifesting what might be in the future. An amalgamation of the archives with a modern spin. 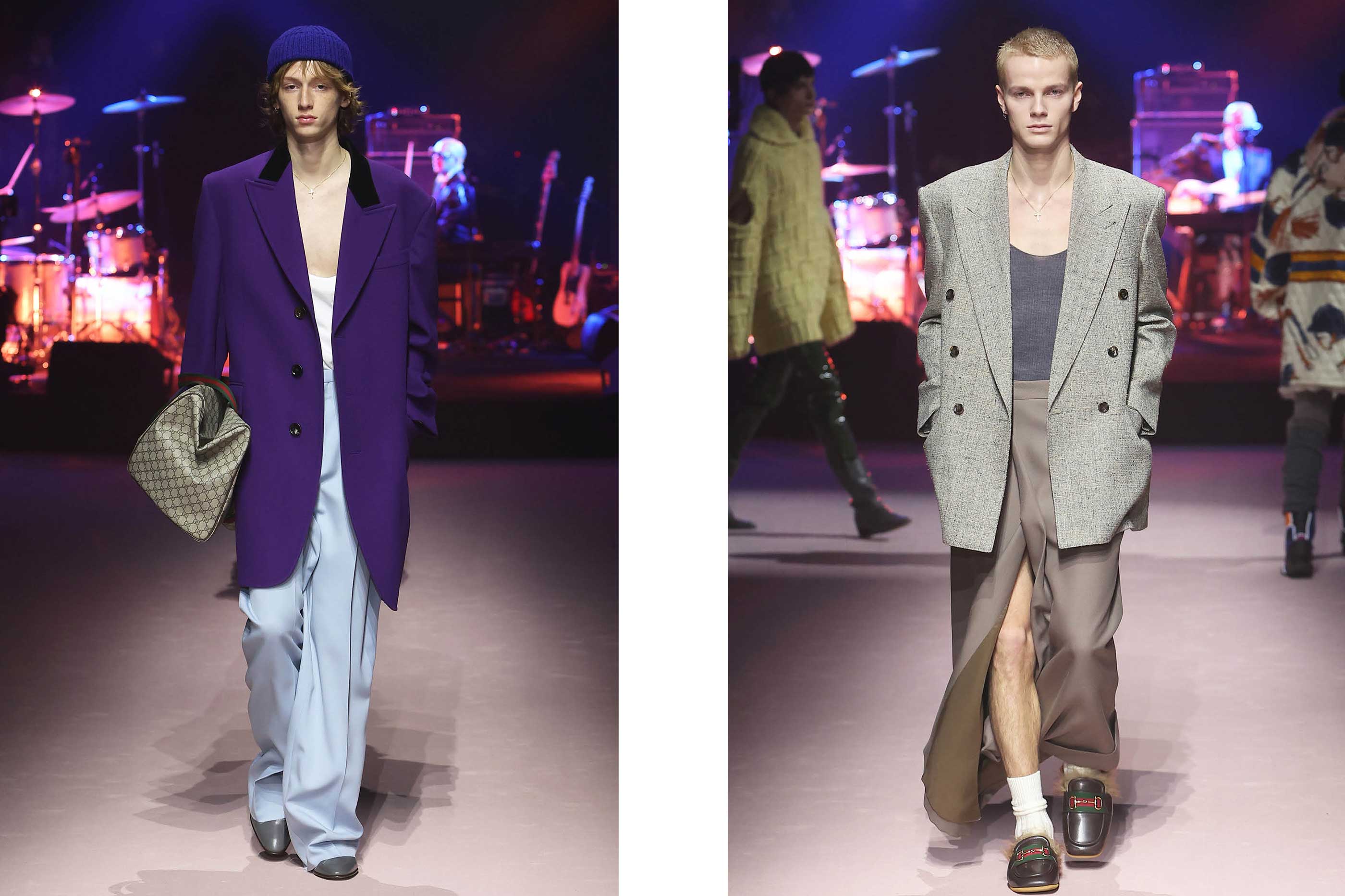 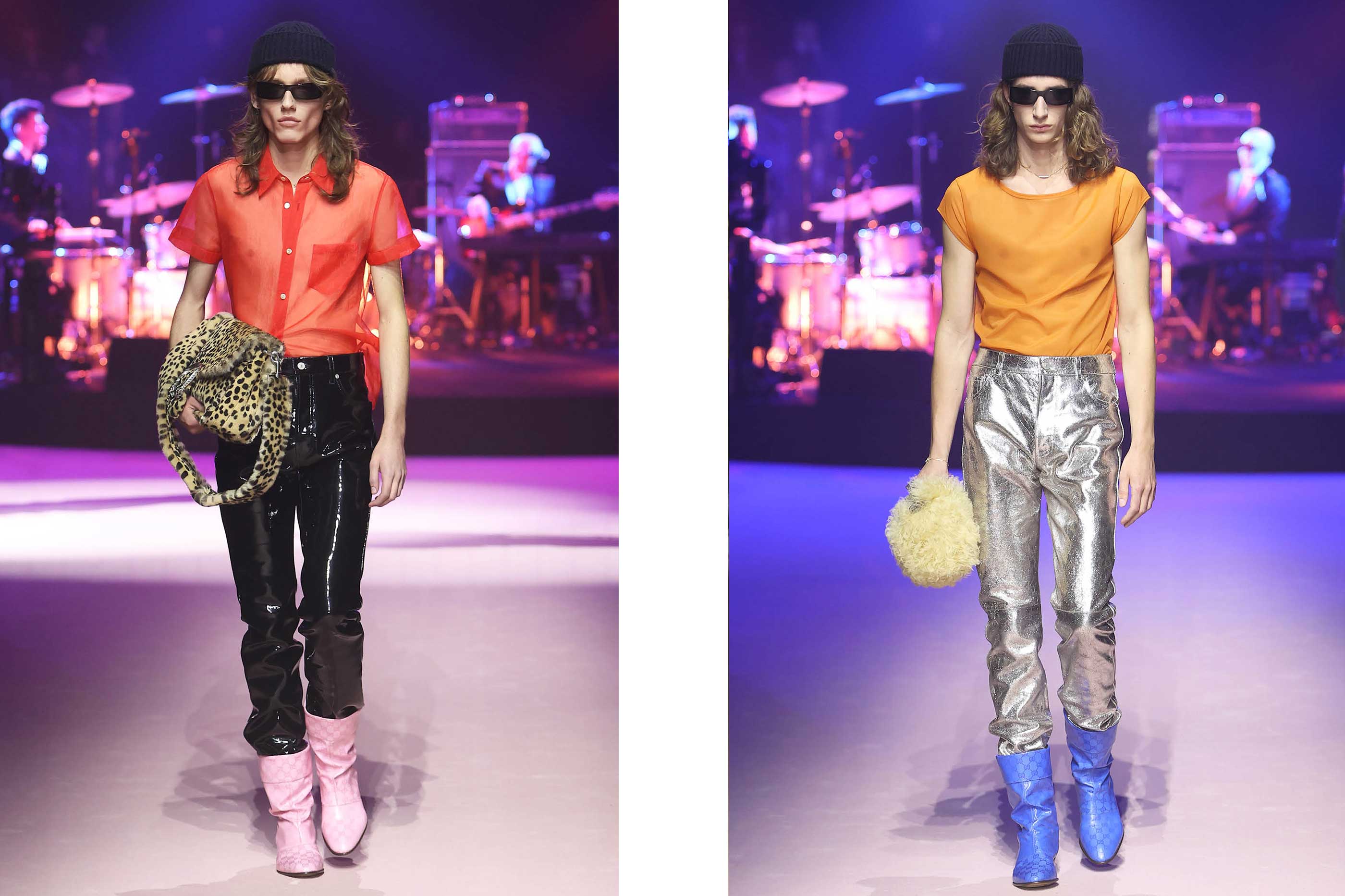 It was all paired back suiting and jeans with jackets, long slim ones that were cut anywhere between the hip and the shin. Beanies were worn en masse, giving the whole thing a bit of an indie sleaze feel. Trousers unbuttoned at the knees to expose slivers of skin, while a later introduction of scrunched wool socks gave the looks an 80s appeal. There were sparkles – not as much as Alessandro may have liked, but they were still there, coating blazers and emblazoning washed jeans with the interlocking GG logo for some fun. The closing look felt like an all-American teen dream with crystal encrusted jeans, a wispy tank top, and a black knit hat. 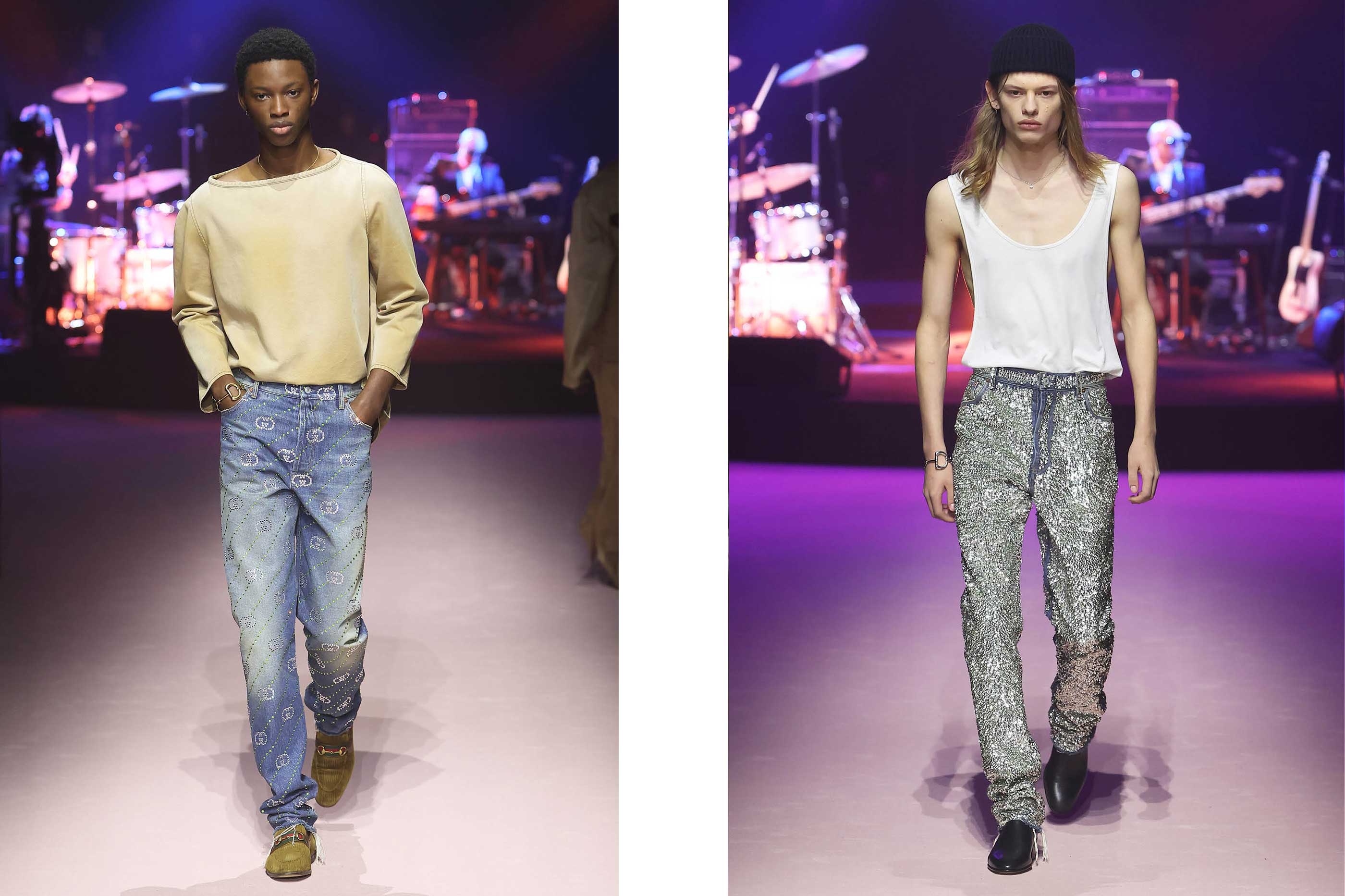 Distressed Horsebit loafers adorned the feet, as well as a slouchy half-boots iterated in monogram colours from grey to electric blue. In true Gucci sensibility, pastel colours clashed with leopard print faux fur bags, knitwear, and satin motorcycle garb to give it a purposeful off-kilter mirage. It was a collection that punctuated the pause – the only question is: how long will it last?