It was a humid Friday afternoon. People were clocking off for the week and had already begun to crowd the tiled streets of Haymarket. Not Ari Kiko though. When I exit the lift and file into her studio (shoes off of course) she’s busy arranging garments to be shot for her website. It’s bright and warm in the studio; a pastel hued haven filled with racks of vintage finds and thoughtful furnishings. Most notably a rug from Mush Studios NYC and a jagged pillow from Shy Talaga.

We sit on the floor and sip cold brew coffee, she tells me about her recent trip to Thailand and all the second hand pieces she found. Kiko is fashion obsessed, her eyes widen in excitement as she takes me through a couple of Vivienne Westwood knit vests. She’s preparing for her next drop of vintage designer clothing, launching on March 31 at her eponymous online store, Kiko Vintage. Her loyal Instagram following are simply chomping at the bit for it, many of whom are transplants from the days when she was solely selling on Depop.

Yes, Kiko Vintage started out as a Depop store in 2016 and has since blossomed into a fully-fledged destination for designer vintage. In between finishing off her Law degree, Ari Kiko carefully curates a selection of 40 to 50 pieces each month. It's a business that never sways too far from her community-focused Depop roots. Each package is carbon offset and arrives with a handful of candy and a personalised note card. So for those with little else but designer vintage on their mind, we caught up with Ari Kiko who shares her tips on everything from sourcing to how to tell if a piece is authentic. Find our conversation, below.

What moved you to create Kiko Vintage?

It began when I was introduced to Depop in 2016. But I've always loved clothes. Even when I was a little kid I never let my parents dress me, I always wanted to dress myself. Growing up in Harlem everyone is telling a story with the way they dress. It's intentional. I was also around vintage stores but I never took it seriously enough to consider it as a job. Another thing is that my dad has really beautiful tastes in things and that always stayed with me.

Also, my grandparents were Holocaust survivors. So they spent what money they had on art, clothing and furniture, and just had this sense of investing in beautiful things that would last.

And when I moved out of home, I didn't have much money but I had heaps of clothes. And so when I came across Depop I was like, 'I wouldn't mind a little bit of extra cash'. I think the first thing I sold was a vintage leopard print coat that I bought in Berlin and I remember delivering it to the girl on the day and just being like, 'wow, this is crazy'. I've never met this person in my life and all of a sudden, they have my jacket and they're enjoying it. It was such a rush.

What is the best thing about running your very own vintage store?

If I see somebody feeling beautiful in something that I've picked out for them, that is the most joy that I get in my job. Again, that's also one of the sad things about running an online business—you don't get to see the instant reaction.

With things that are designer as well, I love the idea that somebody bought this for themselves and it was a special moment for them. Sure, maybe for some people, they throw around hundreds of dollars every week on clothing, but for a lot of people, you're saving up for a long time to buy a piece that's really special to you. I love being able to facilitate that for people. 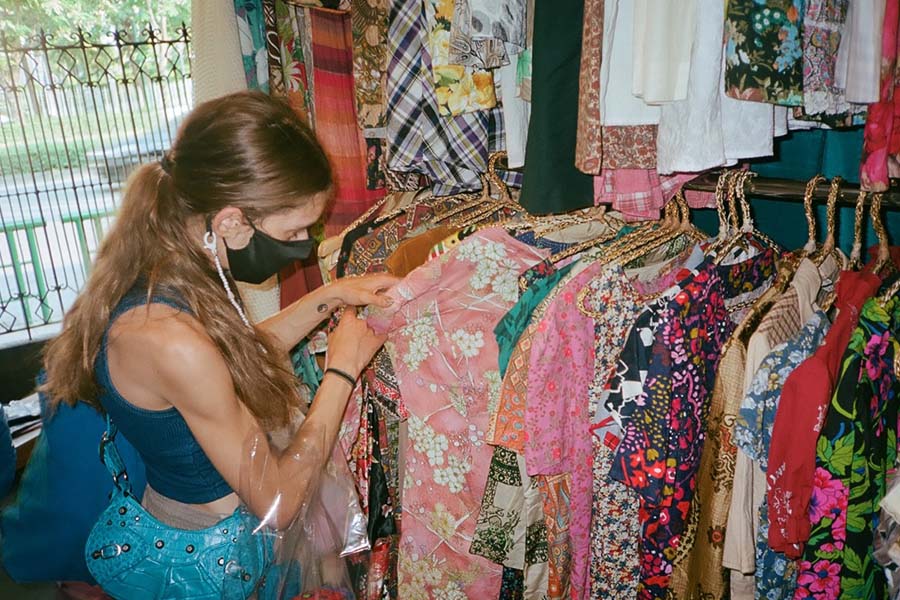 What makes a Kiko Vintage piece?

Kiko Vintage is almost like an alter ego I created for myself. It's filled with things that I like but I would never wear or I can't bring myself to wear.

I think initially, because I didn't know that much about designer fashion, I was attracted to things that had a lot of logos because people can immediately see value in something that says Christian Dior on it. But over time, I've developed a huge appreciation for the art of design and so, the shop is also a reflection of my journey through fashion.

Construction is also something that I think I'm finding increasingly important. So a Kiko Vintage piece would reflect this.

Are there any designers that you're always on the lookout for?

I'm really loving vintage Comme des Garçons and Issey Miyake. And I mean, Emilio Pucci is a designer I've become pretty obsessed with lately. Jean Paul Gaultier is also an all time favourite for me. Over the last year I've fallen in love with Vivienne Westwood, who she is as a person and designer, and the way she uses her platform to centre environmental issues. She's always been ahead of the curve. Just like Jean Paul Gaultier, who was one of the first people to put POC and non binary people on the runway in the 90s. I just think there's so much credence in their garments. Then I love a vintage 90s Betsey Johnson number.

I'm also really into vintage lingerie. I love vintage La Perla, Chantal Thomass—all of these UK or EU based lingerie brands who are an example of when undergarments were treasured and made well.

What makes vintage so special?

One of the great things about vintage is that aside from the sustainable aspect, maybe pieces go out of style for a period, but they always have historical relevance or story to tell. That and old things last. I mean, it's something an old person would say, but they're built to last. Also, when I get something in like a vintage Gunne Sax blouse from the 70s I look at it and just think, 'who wore you?'

What is your unicorn vintage designer piece?

I've actually found those things. There are still pieces that I love but I do have an archive of special special things. The Chanel Surf 2002 dress is so special to me. As is this Vivienne Westwood black corset I found. Also I can hear the voice of my future daughter yelling at me saying 'how the hell did you sell this?' If I have that fear I usually keep it. It's what guides me. My mum threw out some vintage Versace pants that she had and I have resented her ever since. 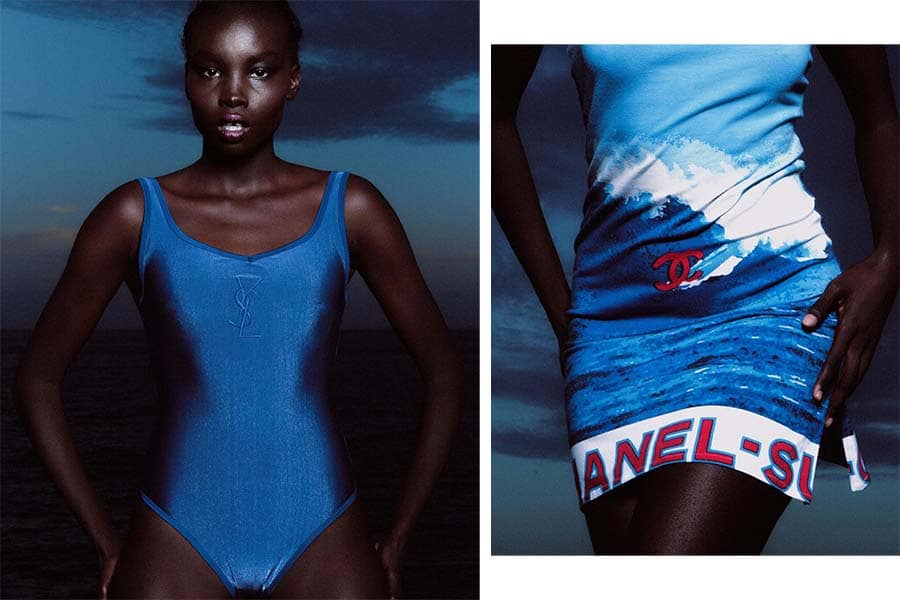 How can you tell if a piece is authentic?

A lot of the assurance around authenticity can come from taking note of the way something is made. Tags are super important to pay attention to. Construction is another huge way of knowing; you can feel something and know whether it's real or fake designer. The era that it's from or what it's made out of even—there's all of these little markers that over time you start to develop and pay attention to. I also think if something is a little bit worn or not perfect, then it's probably more likely that it's real. It means that somebody has actually lived in it.

Another giveaway is hardware. Authentic vintage designer pieces have engraved hardware, even on all the zippers and buttons. You can also google specific details like 'who was the zip company that Christian Dior used' or you can look up an authentic version of that piece and compare the details to the one you're looking at.

Ask yourself how does the stitching look? Where are the tags placed? Where is the monogram sitting? What colours was the piece made in? Really hone in on the details. Also, Vogue Runway is really useful for comparing. And if you want to test if something is real leather, then you can just put a light to it and see if it catches on fire.

What are some things we should be looking for before drop cash?

Sizing is incredibly important to pay attention to. A size 12 in the 90s is not the same as a 12 today, so always check measurements.

I'm really trying to stock a larger variation of sizes than I have in the past. I'm a smaller size and naturally the graduation from me selling my own clothes was to me selling things that I would wear once then sell on. Or I'm always modelling the clothes. So I would ask would they look good on me? But I'm really trying not to do that. I want Kiko Vintage to be an inclusive space where anybody can find something beautiful and wear it.

Do you have any tips for sourcing designer vintage online?

One of the best tips is that putting in non-English search terms is a huge way to access vintage. Don't be afraid to look up words or accents on Google Translate and then search for that too. You'll get a whole different set of results, I promise.

Also, get on German eBay, French eBay and Italian eBay immediately. These are the countries where designer clothes used to be made and so, there's a wealth of clothing there. The number of times I've found incredible vintage Gaultier on a German resale website.

The other thing is saving searches on eBay, which I don't think a lot of people know about. You get notified if something comes up. The same goes for your Google searches. 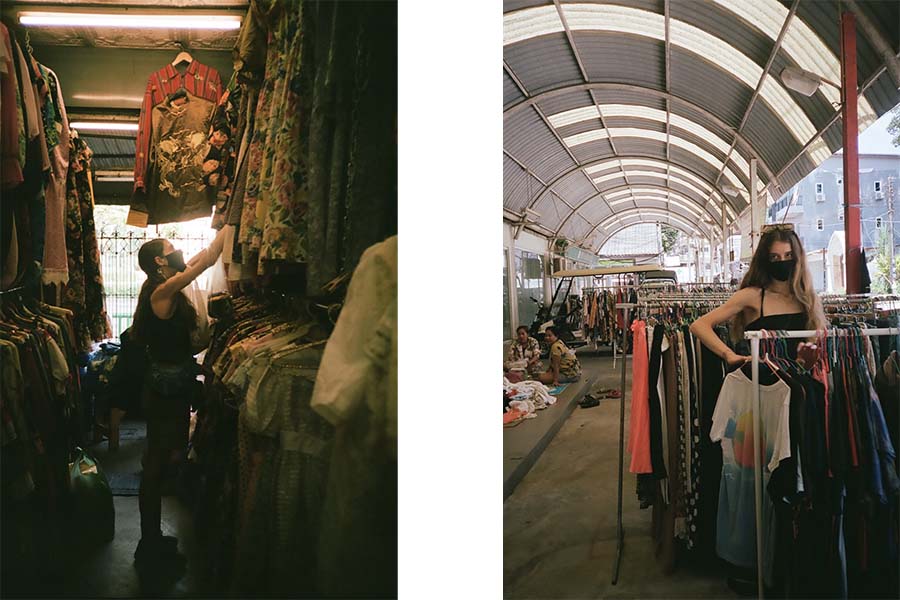 Aside from Kiko Vintage, what other websites are great for sourcing?

eBay is great. Vestiaire Collective is great. Etsy is low-key great. Some things are really expensive. Some things are not. It's a mixed bag. I buy the majority of my stock from consigners but I'm constantly looking online. There's some solid finds on Depop. Another thing about Depop is that you can also search terms that aren't in English. There's a lot of Italian people on Depop and they always have fancy pieces, especially Prada.

Have you picked up on any trends or pieces that people are going to you for?

The girlies love Emilio Pucci. It's a lot of bright colour at the moment. I think we're probably moving away from the tiny bag and toward bigger bags like the Balenciaga City.

Explore the March drop online at kikovintage.com.au where it will launch 11am AEDT Thursday, March 31. You can also follow Kiko Vintage on Instagram for more updates.

PREVIOUS
Balletcore is en pointe: Everything you need to know about TikTok's latest fashion trend
NEXT
Bassike goes carbon neutral with their #morethanbassike campaign