It was only expected that Mrs. Miuccia Prada would play us like a fiddle this season. Securing the final spot to close out Paris Fashion Week and Fall 2022 collections as a whole, Prada sends a clear message that she knows she's got us in a styling headlock, and she'll be capitalising on our vulnerability for as long as she pleases.

Doubling down on the Spring 22 caricature of office wear that reached more internet virility than we've seen in fashion for a long time, Mrs. Prada leant into one of the most prominent silhouettes of the season even further, and took her Miu Miu office girl for a weekend on the courts for Miu Miu Fall 2022. 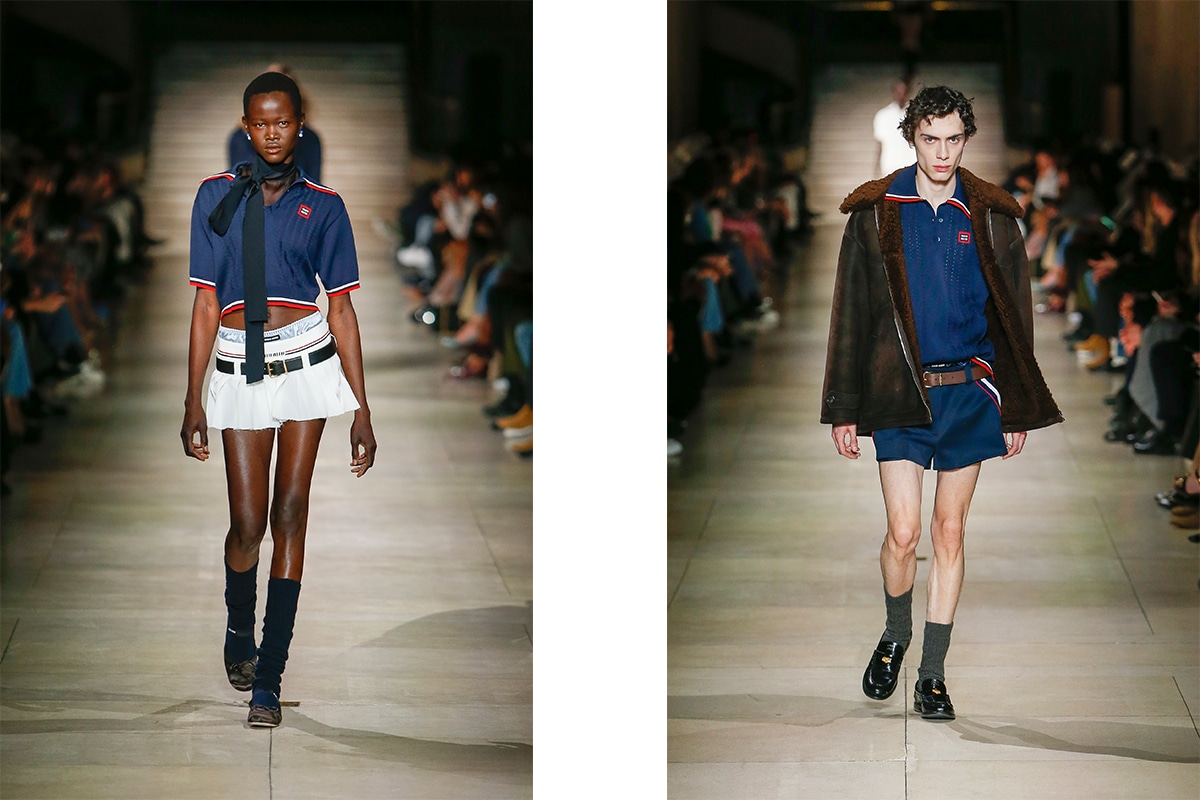 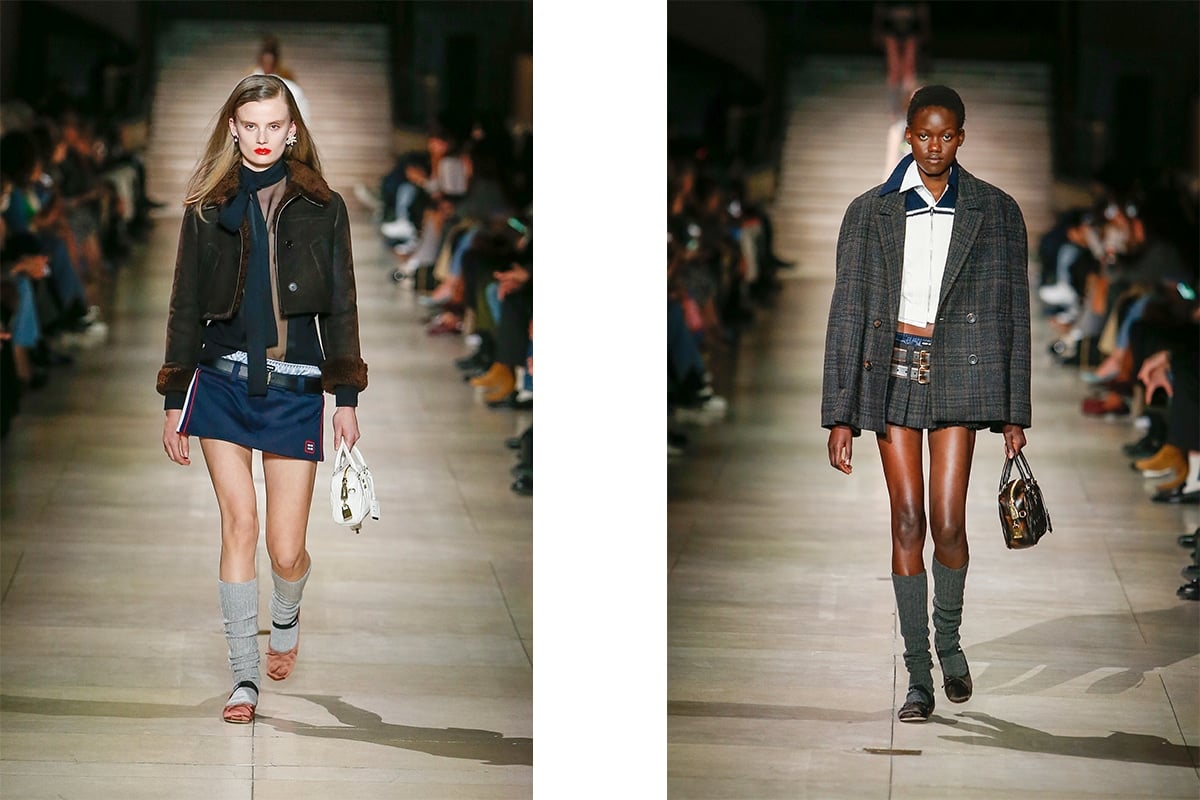 There was a sense of humour to it all. Prada is in on the joke (after all, she created it). The influence her Spring 22 collection had on the fashion world is not lost on her, and to an almost comical, cartoonish music, models charged down the runway in her now signature pleated mini skirts. Very important fashion people on their way to do very important fashion things wearing double belted hot pants with ballet shoes and oversized knit socks. You have to laugh along when you're a prisoner to Prada's cleverness and wit.

The serve this season was the sporty interpretation of the girl we'd begun to know for Spring 22. The tactile cotton that made up the minis was swapped out for white jersey and pleated cotton with athletic, blue and red stripes lining the belted waistband. Slashed cotton poplin shirts were switched out for polos, and the oversized blazer/coat made a triumphant return, because, how could it not? 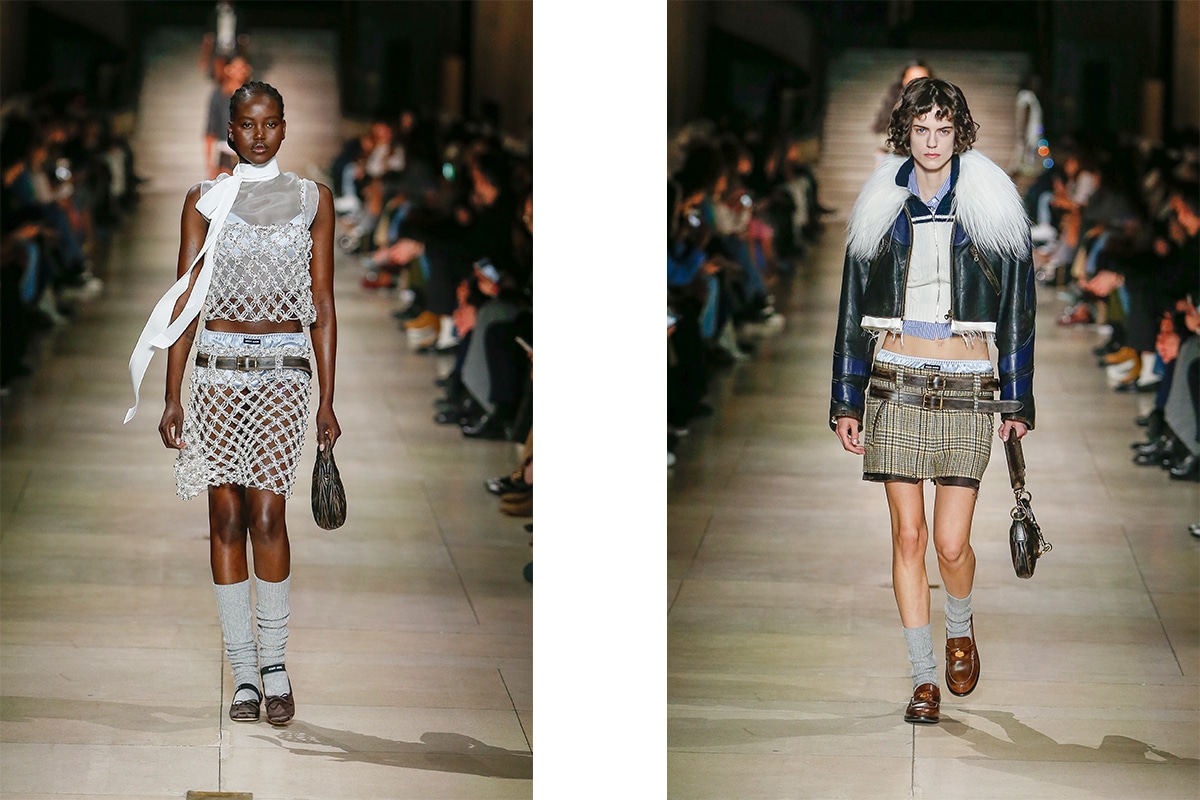 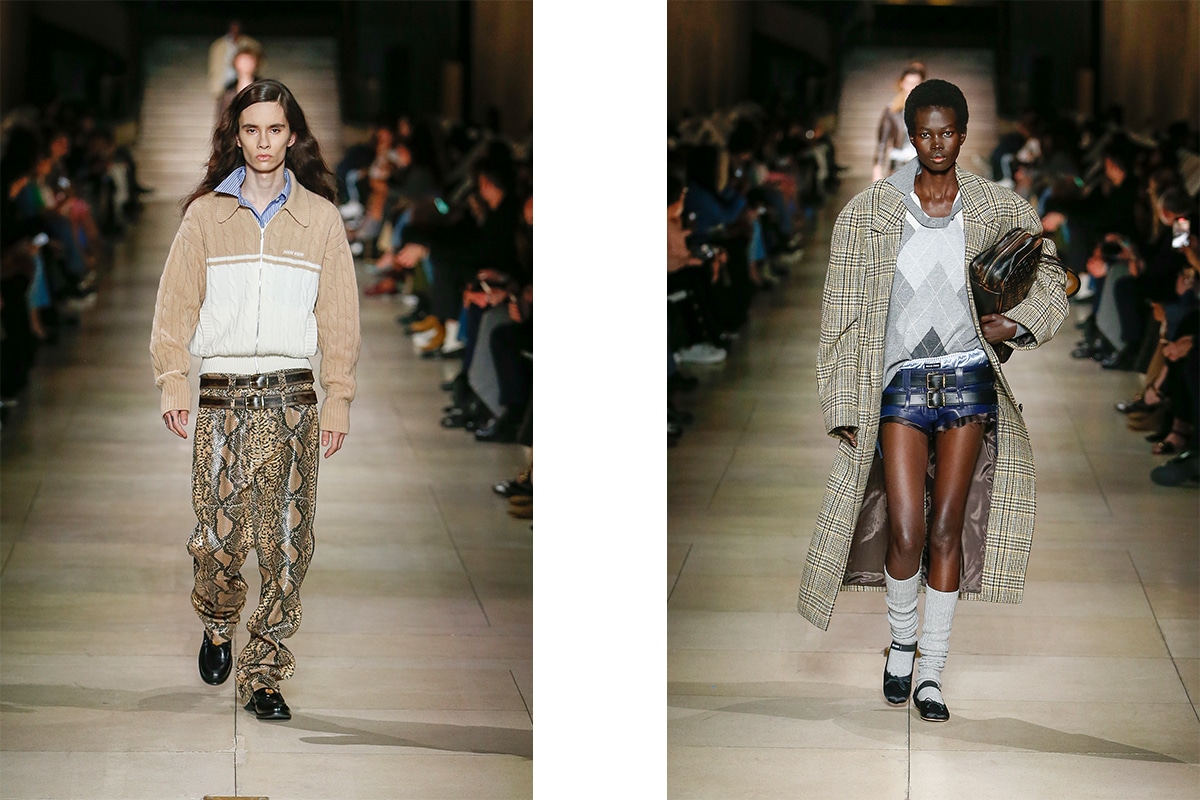 Silk underwear sporting the Miu Miu logo peeked out of the dangerously low waistbands, while bomber jackets were cropped to reveal the part of our torsos that haven't seen the light of day since 2003. For evening wear, crystal encrusted, netted two pieces were layered on top the same silk briefs with the same signature belting, accessorised with skinny silk scarves and the Matelassé bag.

From the waves she made last October with her silhouettes that basically broke the internet, Fall 2022 felt like an easy move for Mrs. Prada, but not a lazy one – despite the audience being seated in deck chairs – rather, a moment for her to embody the brand. This is what Miuccia Prada does best, and we'll simp for it as long as she offers it up. 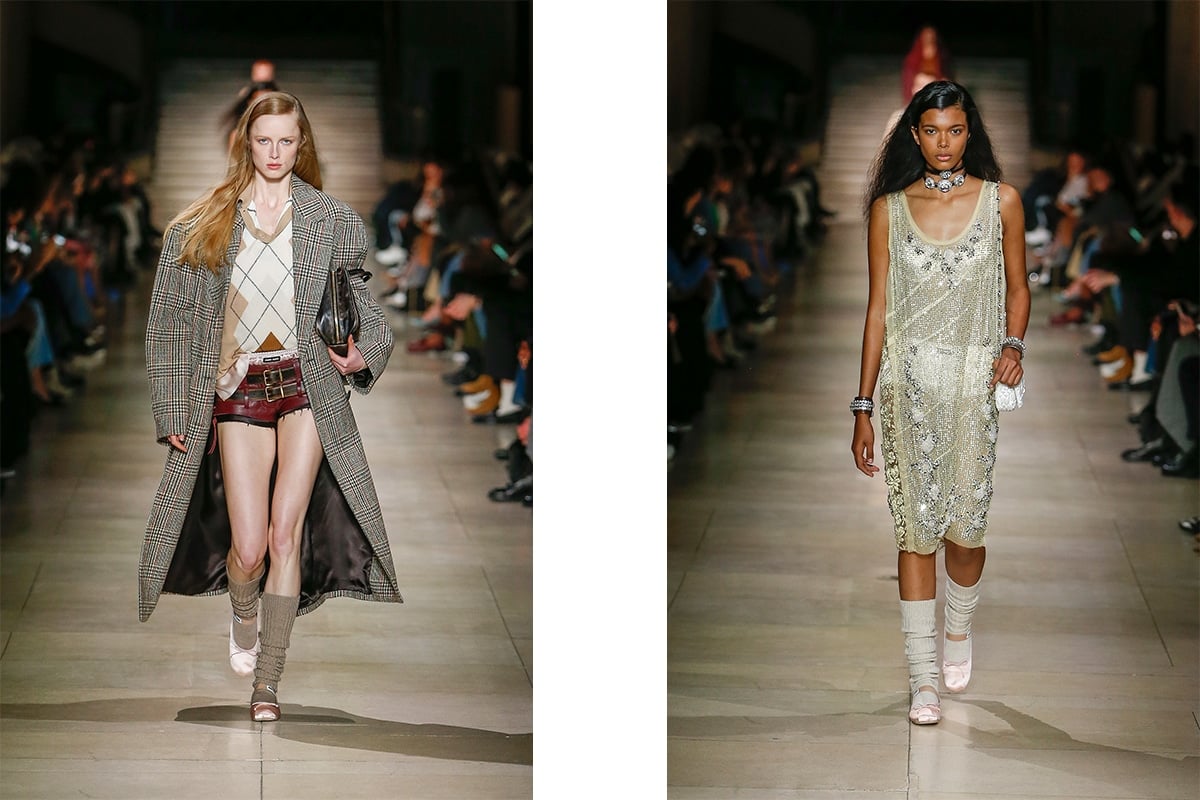 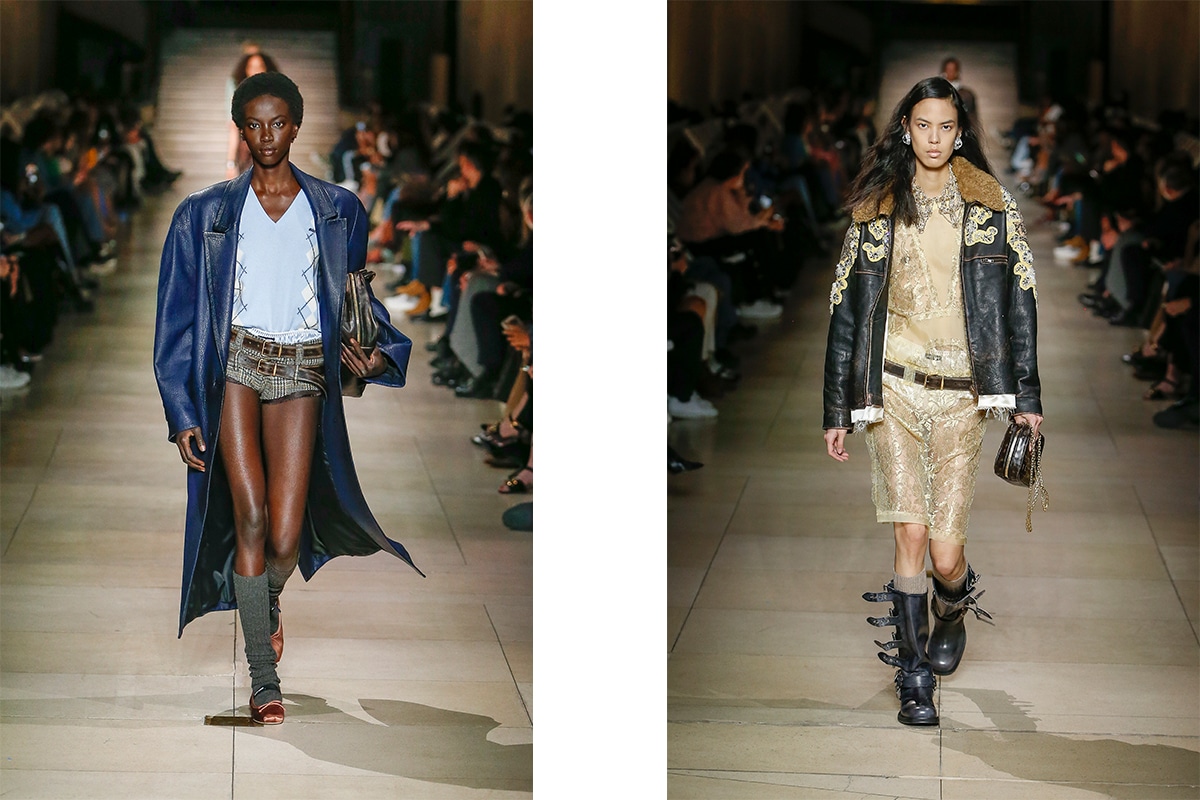