As part of the program, Carrick created three pieces for Merci Maison inspired by the sun, earth and female energy. The art is designed to seamlessly flow together while also able to stand alone as a statement piece of artwork.

“I really wanted to create like three pieces that were separate, but still together and have a harmony together with nature and female energy,” explained Carrick. “I've been doing bigger pieces similar to these three and when Jade [Yarborough, founder of Merci Maison] came to me and asked me about to do these pieces, I just thought it'd be really, really cool to do three that were separate, yet still could be hung together. It’s a beautiful little story.”

Influenced by artists including Henri Matisse and Le Corbusier, Carrick typically works on a larger canvas, crafting detailed pieces made to fill a space. A large portion of her inspiration is drawn from the rawness of Australia’s sprawling landscape, from the waters to the outback.

“I grew up in the Northern Rivers, so the Byron Hinterland was a huge inspiration in my work for a lot of my younger adult life and still has a lot of inspiration.”

“I do a lot of hikes and the National Parks surroundings Sydney. For me, whenever I do national park hikes, the rock formations, the colours and the textures are inspiring to me, and I feel like the colours and tones are very Australian.” 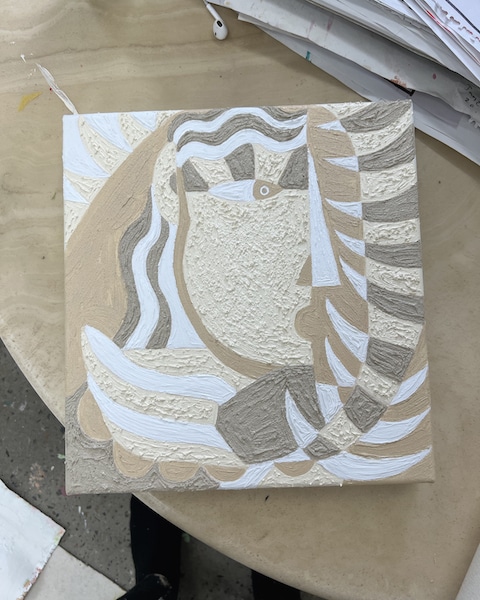 Of particular inspiration from the natural landscape are the tones, textures and patterns which are frequently drawn on, evident in her artwork for the Artist in Residence program. Carrick endeavoured to create rock-like formations through the textured medium, with the three pieces a visual representation of togetherness, harmony and the connections we can have with nature.

“I don't usually work on this size scale, so I just had to come up with something that would, tell a bit of a story,” says Carrick of the cohesion and meaning behind the pieces. “It was a little bit tricky, because at first I was like, ‘I've never done a size this small,’ but I just feel like they work really beautifully together and even though they are small, there’s a cohesion to them.”

Through her work, Carrick understands the meaning of being an artist beyond constructing her artwork; that the role allows her to inspire others and encourage those with an affinity for art to engage in it with a purpose. Her career has constantly been rooted in the ideas of female empowerment and celebrating women in art and while her style is frequently evolving, it is always centred around the themes of empowerment and positivity. 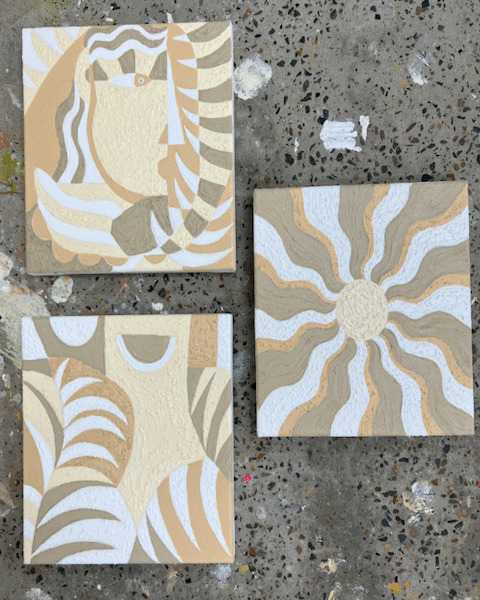 This affinity for supporting women encouraged her to be part of the Artist in Residence project when approached by Merci Maison, an additional means of encouraging women in the industry.

“I thought it was a cool concept; I love the [Merci Maison] Bello frames and haven't seen any frames like them. I think it's important for women to collaborate and work together.”