There's this photo of Isabella Manfredi from one of the last gigs The Preatures ever did. It's was shot on Valentine's Day in 2019 and she's caught mid air, leaping onto the Selina's stage, a legendary music venue hidden in the bowels of the Coogee Bay Hotel that hosted Nirvana, INXS and Crowded House in its heyday. Manfredi is wearing these patent white Miu Miu boots that I've spent the better part of a year trawling Vestiaire and The RealReal for. Her hair is cropped into a slick black mullet and together with the chrome romper she's wearing it's, there is no other way to put it, the uniform of a rockstar.

Every performer has an alter ego and for Manfredi it's this person, Izzi. "When I picture her I see her striding onto stage and being a bit bratty," she tells me over Zoom. "She's a real force that comes out when I'm on stage."

Manfredi's solo debut album izzi carves out space to interrogate this persona she built during her time as the frontwoman of The Preatures, breaking it down if only to forge it into something stronger and more concentrated. More than anything, "it was quite a healthy, grounding outcome of the last two years to chisel her out of my identity and give her her own role", Isabella explains, "one where the boundaries aren't blurred".

Since The Preatures disbanded–hell, since we all were plunged into the first lockdown, a lot has shifted in Isabella Manfredi's life. The 35-year-old tied the knot, gave birth to her baby girl Mina, and struck out on her own. You can't help but think this reset was inevitable. "Izzi is an authentic part of me but she doesn't represent everything. She doesn't encapsulate me as a woman, as a mother, a friend, a daughter, a partner, me as a writer."

A stack of orange Kennards boxes sit behind Manfredi while she talks. The musician is getting ready to fly to Los Angeles for a month. It's a place she feels very connected to given its ties to Americana and folk music. From the outset of writing izzi, Isabella knew she wanted to do a record with LA-based producer Jonathan Wilson. "He's a real musician's musician and he'd created this studio in Echo Park which became a bedrock of the revival of the Laurel Canyon scene."

So in 2019 Manfredi headed to LA, for what would be the third time in maybe three of four months, with the intention of working on the album. She'd lined up time with Wilson to demo a bunch of songs and ended up securing an Airbnb owned by an older woman who was the manager of a famous rapper. "It was this strange house and the owner was lovely in that American way – really overfamiliar." She had the entire place to herself and better yet it was equipped with a piano. On paper it was the ideal scenario.

But after a period spent labouring over 20 songs at co-writer Emma Louise's house, Isabella hit a wall. "I just thought 'this is all shit'. I didn't like anything I was doing." Inside her head she began to tear herself down in a bluster of self doubt. The reality was "I had taken myself out of Australia to escape my relationship and the fact that it was over. And I was writing all these songs about heartbreak but I wasn't allowing myself to feel heartbroken."

Ditching the writing, Manfredi went down to Echo Park with a book about Bob Dylan as it was just after Rolling Thunder Revue had premiered. She recalls watching couples pedal the swan boats about the lake and unexpectedly bursting into tears. "I just thought, "I want somebody to live my life with. I just want that companionship. I want that love. I want that experience."

"So I gathered myself up and I went to the bottle shop. I bought a bottle of mezcal and a fresh pack of rollies back to this house and just surrendered to the piano."

From there the track "Portrait" began to take shape. By morning, and one empty bottle of mezcal later, the song was pretty much done. She went to bed, then pulled another all-nighter to finish it off. When she took it to Wilson in Topanga a few days later, he took one look at her after hearing it and said "nobody's doing shit that deep anymore".

It was a real turning point for Manfredi. Partly because it marked a new beginning for her as a songwriter, affirming the pursuit. But mostly because it was from here that she began to come back to herself. "I had access to myself again. And that felt so wondrous and freeing and affirming."

Not long after Manfredi shared the song with her dad, who told her it was "like you've wrapped yourself in the song for comfort". It's for this reason that izzi isn't a breakup album, but rather one about emancipation. Stylistically, it's the evolution of what she did in The Preatures, which is quintessentially Pop Rock. However, it's more lyrical than what we've heard before, with an element of the unexpected and kitsch too. "There has to be a bit of bad taste in there, otherwise, it's no fun. But that might be the Italian in me," she jokes. 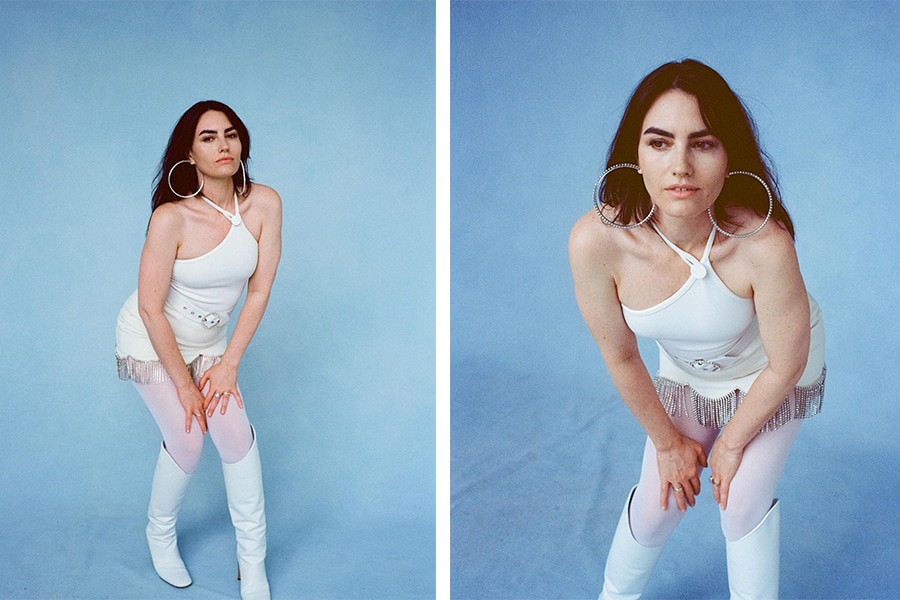 As we've seen with her previous work, she's heavily steered by folk and country music. There's a certain melancholy and simplicity to the style that attracts her. Much of the songs are about everyday life, and the storytelling tradition and – more importantly – phrasing speaks to the kind of plain speaking she hopes to achieve in her own albums. "I keep coming back to that. Plain speaking. How do I speak and sing so that I can be understood," she wonders. "I don't want to subvert the audience. I don't want to undercut them. I don't want to be above them. I want to be right there talking to them. Not that I don't appreciate songwriters that do, like Bob Dylan and Tom Waits and Nick Cave and PJ Harvey. I love that but it's not me."

A press release for izzi, detailed that the musician wanted the record to sounds as if "Bruce Springsteen was in an all-girl group in the early 2000s", "Portrait" certainly fulfils this brief. The guitar has the emotive pang of the former, while the lyrics and their delivery emulate the reassuring, silvery quality of The Spice Girls. All with a general feeling akin to Joni Mitchell's River.

Isabella speaks effortlessly and eloquently about the influences behind the record, dashing off names without pause. I make a mental note to dig into them myself. Jackson Browne and his backing band come up. As does Joe Cocker and Leon Russell when they linked up for the Mad Dogs & Englishmen tours. And Joni Mitchell when she worked with the LA Express. She can't shake this idea of crossovers either. Prince producing Bonnie Raitt specifically, which apparently happened, she hastens to tell me, the recordings of which lay dormant and unreleased.

There are others too, but her words peter out. "Mummy brain means that I get on these – I explain it to my partner like my psyche is a series of rooms and then sometimes I reach into this room for a word or a sentence and it's just mud." And anyway, she wants to tell me about the artists she collaborated with on the record.

"I have such a huge respect for the artistry of the musicians that worked on this album. It was fun. I didn't have to tend to anyone's feelings. It was a relief. I could just get on with the work." PRICIE surfaces in the bridge of "Naive" a downy track with an addictive melody. The music video captures Manfredi, in makeup redolent of PJ Harvey's To Bring You My Love era, singing alongside four male backing dancers (which includes Manfredi's husband, Rupert Parry) all of whom are wearing aviators, diapers and sucking on dummies.

Behind the scenes, Stella Donnelly had a hand in crafting the record too, as did Emma Louise, Alex Hope, Erica Ender, and Shungudzo. Meanwhile, Manfredi enlisted the help of Stella Mozgawa to play drums, Michael Di Francesco on the bass and Kirin J. Callinan on guitar as, "I really love working with guitars that have a voice".

"I'm always way more about the feeling than about perfectionism. In music, in life, in fashion, the imperfection for me makes it interesting, and also makes it emotional." Imperfection is something she's learned to embrace in the wake of the pandemic, and now as a new mother.

"One thing that came from having Mina was just the constant distraction. It meant that I ended up with lots of little bits of songs. Whereas before, I might have more of a chance to sit down with something. But that in of itself is quite cool," she explains when I ask how motherhood has influenced her music. Then there was the fact the while she was pregnant with Mina, she remembers being called to music that felt softer, feminine and introspective. In particular, she flogged Cleo Sol's album Mother following the birth.

And while Manfredi thinks it's too soon to really say how motherhood has coloured her music, at the end of day having Mina has "just made me more determined to do my own thing and for her to feel like she's a part of it", she explains. She never wants her daughter to think of music as something her mum does behind a locked door with a "do not disturb" sign tacked on. "It's just what mum does. It's who she is – it's not all she is, but it's part of our daily lives. It's not taking mum away from her. It's what gives mum life."

I can't help but prod Manfredi on her iconic tour style and what to expect once she hits the road. I really wasn't kidding when I said I've dedicated hours to sifting through resale sites for those Miu Miu knee-high boots. For izzi, Manfredi has replaced them with a white Jil Sander pair that remind her of Nancy Sinatra. Her look for this album could fall under the category of rhinestone-spaghetti-western if such a thing existed and above all, she's finding herself once again drawn towards the colour white.

"I think this album has allowed me to step into my "sexy period,"" Manfredi asserts through a smile. "I'm coming into myself as a woman in my thirties. I'm mature. I'm experienced. I'm a mother. I have extreme respect for my body and its capability. I feel like I'm in the prime of my life."

Isabella Manfredi's solo debut izzi dropped on September 2. You can listen to it on Spotify, Apple Music or wherever you go to hear new sounds.

PREVIOUS
Spring reading: The best new books to read this September, from cult Australian authors to mysteries in the south of England
NEXT
Apparently, the 'Call Me By Your Name' sequel is back on the cards