If you needed another reminder that the gender pay gap is alive and well, then listen in, especially if you work in the arts because we're talking about you.

In early August, the Australian Taxation Office (ATO) released a bunch of statistics concerning the tax returns of almost 15 million Australians. As usual, the research revealed the richest and poorest incomes in Australia, along with the revelation that 60 millionaires avoided paying a cent of income tax during this period.

For the most part, any new findings were reported on by the major news outlets, who are well-equipped at translating tax research gobbledegook into simple terms for a layman like myself. One tool to come out of this was a handy list created by the ABC, that displays the average and median incomes for specific occupations, be it a bricklayer, barista or artist – even.

Well, a quick tinkering around on the tool revealed a huge pay disparity among men and women in the arts, and unless you occupy a senior role as a curator or director, your taxable income sits below what's considered the Australian median. 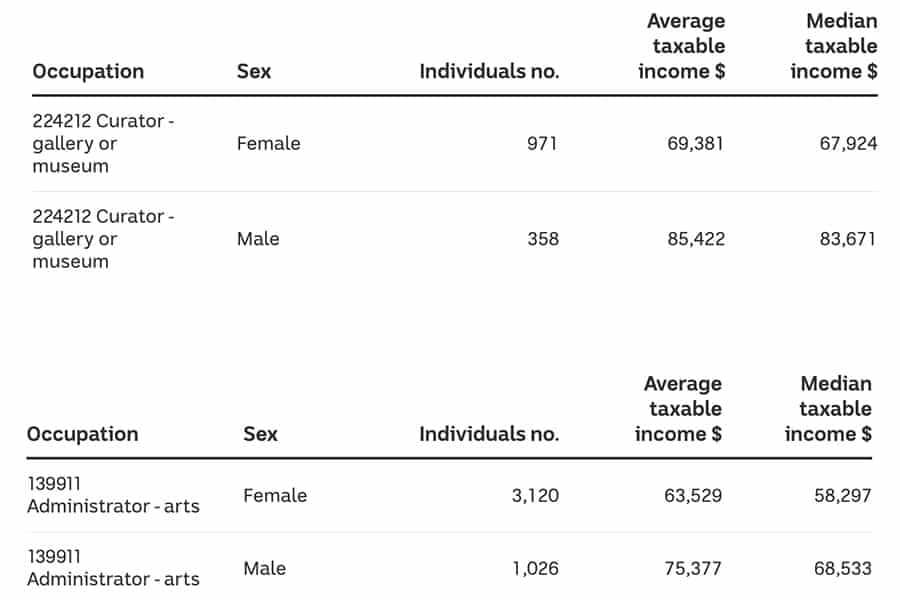 I mention median, because it's a much more accurate indicator of what someone is paid for their labour. As the ABC puts it, "it marks the spot where half of all workers have a taxable income higher than that number, and half have a taxable income lower". Whereas, the average can be inflated by the high-earners at the top, warping our perspective of what the standard actually is.

The median Australian income sits at $48,381, or $56,746 if you're a man and $41,724 as a woman. Whereas, if you're a painter, the median income for women is $27,664, compared to men who come in at $40,695 with only six less men identifying in the category than women. This disparity is standard in each role in the arts industry, as indicated by the ATO data, not once is the median income of men or women in the same numerical bracket.

Multidisciplinary Australian artist James Tylor was the first to sound the alarm on these findings, posting the average income of artists, administrators, curators and directors to his Instagram as a story on August 29.

Although the ATO's data doesn't recognise gender diversity in its statistics, findings from the 2019 Countess Report assert a similar disparity with the number of non-binary and women artists represented in Australian galleries and art institutions compared to men.

From a sample size of 13,000 artists across 184 institutions, the artist-led initiative found that although 71% of art school graduates are women, this is not reflected in State galleries and museums who continue to under-represent women and non-binary folk in their collections and exhibitions.

I am no data analyst, but these numbers paint a, quite frankly, depressing portrait of what it's like to be a woman or gender non conforming person in the arts.

PREVIOUS
From bleached brows to bread making, we take a retrospective look at the latest 'RUSSH' Weekend
NEXT
True crime buffs, there's a Jeffrey Dahmer series coming to Netflix