For many brands, Pride is a moment in the year where an opportunity presents itself to align with the LGBTQI+ community. Sometimes, it is a transparent display of performative activism, other times, it is a genuine proclamation that the people who make up the LGBTQI+ community are seen, heard, and recognised. The latter is what COS is communicating with their delayed launch of their COS Limited Edition Pride T-Shirt in collaboration with lauded London-based artist Coco Capitán.

Featuring three exclusive designs, Coco Capitan shares messages of love and recognition in her signature handwriting that reads “ALWAYS LOVE BECAUSE LOVE IS ALWAYS LOVE” , “A BOYFRIEND CALLED MY GIRLFRIEND” and “WOULD YOU BE MY BOYFRIEND GIRL QUEER FRIEND?” The designs are embroidered onto an organic heavy-weight cotton T-shirt to lend a boxy, structured fit in unisex sizing.

"The first was ALWAYS LOVE BECAUSE LOVE IS ALWAYS LOVE. It was just about inclusivity and how you should love anyone you want." Capitan says on the T-shirts. " There should be no limit and no impediment. Loving someone is always a good thing. And with the other two T-shirts, I wanted to play a little bit with gender orientation. With A BOYFRIEND CALLED MY GIRLFRIEND, I wanted to highlight how there are so many attributes in a person that can be either masculine or feminine that are attractive to me. My partner happens to be a woman, but I think there are many parts of her personality which feel ‘masculine’ to me, or at least match the old notions of masculinity. What I find most attractive in her is the many traits that make her personality without being gender specific." 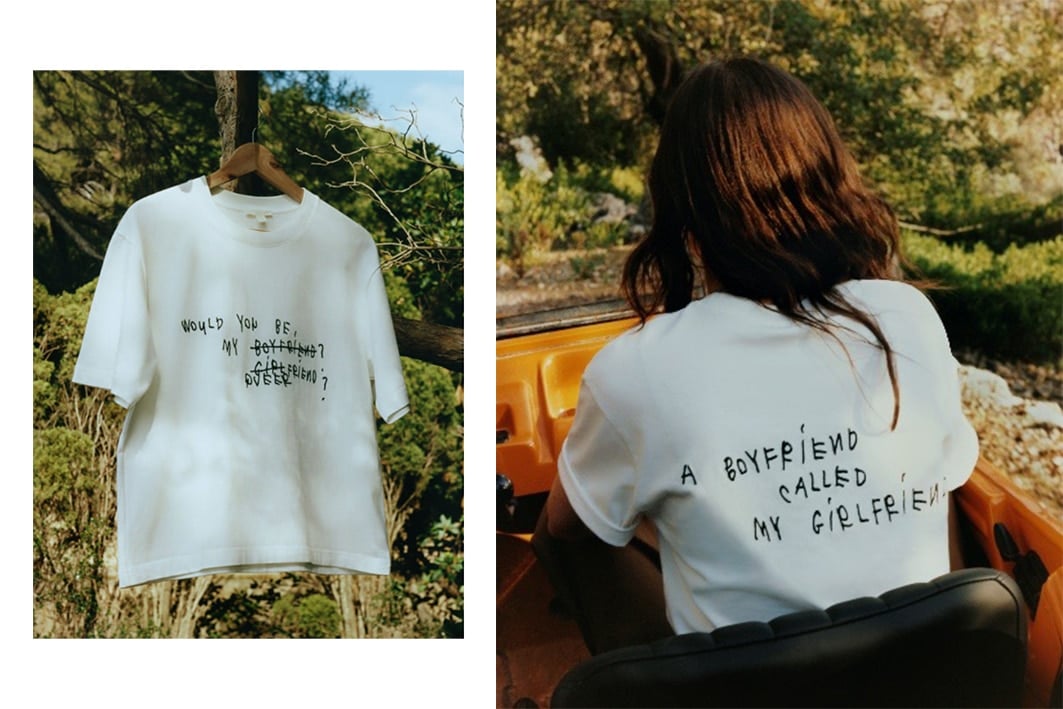 To solidify the intention, 100% of proceeds from the sales of the capsule collection will be donated to Black Rainbow, a national Aboriginal and Torres Strait Islander Lesbian, Gay, Bisexual, Transgender, Queer, Intersex, Asexual, Sistergirl and Brotherboy (LGBTQIASB) organisation in the pursuit of positive health and well-being for the Aboriginal and Torres Strait Islander LGBTQIASB community. Originally focusing on suicide prevention, the diversity of their leadership group has allowed them to expand their horizons.

"Being able to say you feel proud has come in a time and a place. We mustn’t forget how for many years being openly LGBTQ+ wasn’t only a risk and often not an option; being gay simply didn’t exist for many people! It's a very different situation now, but we must not forget all the battles which took place before, like the HIV/AIDS crisis." She said in an interview with COS.

"I am thankful to the many who made it possible for me to able to exist just as who I am without having to give so many explanations. And yet, it upsets me to think that this privilege of being able to be me, is still a right that many are deprived from. We cannot claim victory until everyone - and this is everyone in the gender and sexual spectrum, independent to race, geopolitical location, religion or wealth - can enjoy the right to be who they are and love who they damn please."

The T-shirts will be available in COS Melbourne The Strand & Sydney Martin Place.

PREVIOUS
Chanel Cruise goes to Dubai
NEXT
The Australian Dreamscape: Cartier announces the opening of its official Oceania flagship store in Sydney