Animals are back in fashion, it would seem, or so it became apparent when models climbed out of an array of mobile animal sculptures for the Chanel Spring Summer 2023 Haute Couture show today. The set was designed by Xavier Veilhan, a long-time collaborator of Virginie Viard, and acted as the starting point for the collection. Together, they visited Gabrielle Chanel's Rue Cambon apartment, which is utterly filled with a collection of animalistic objects. 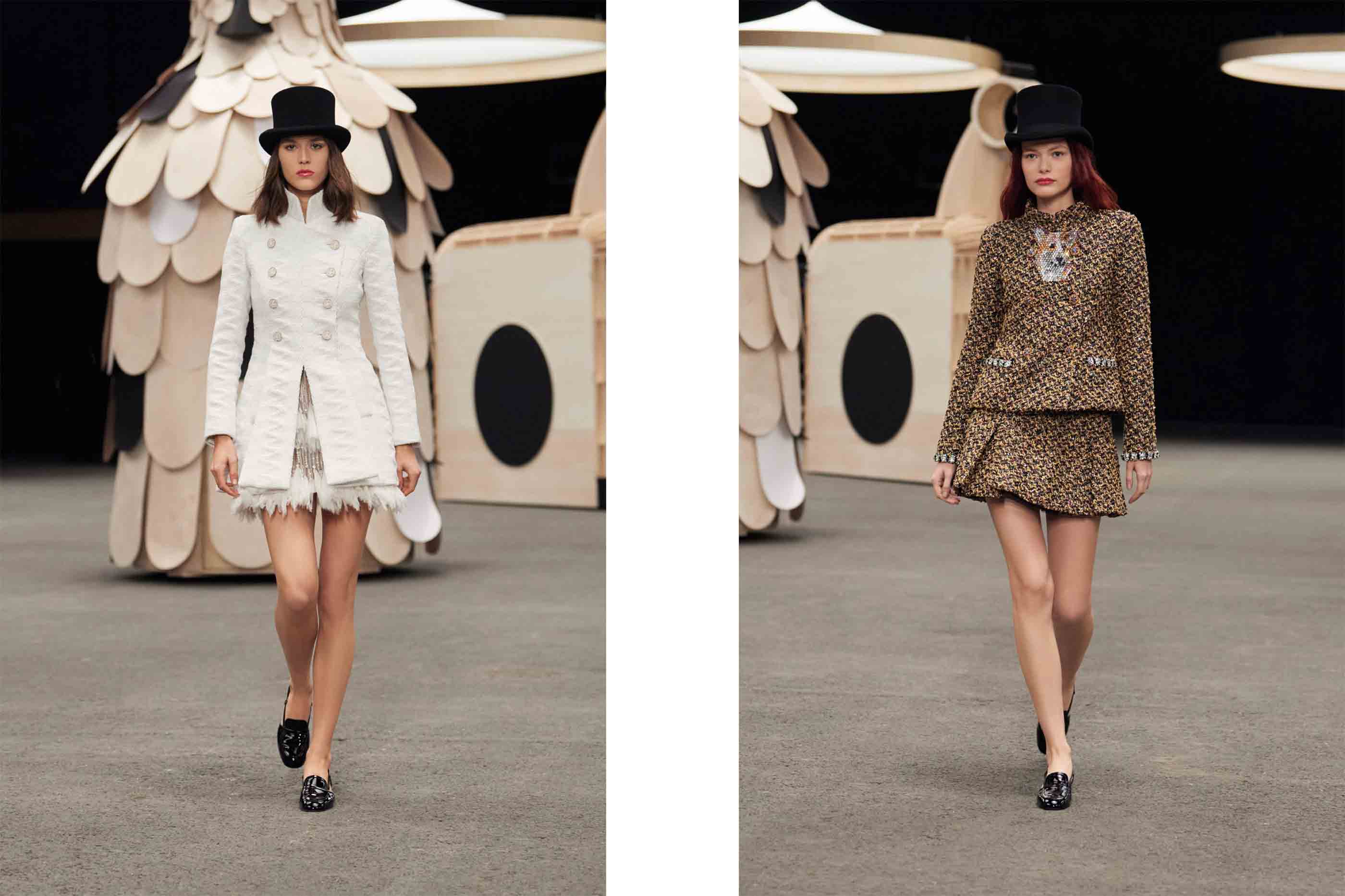 From there, it morphed into a sort-of street parade. The animal world meets village square festival, a playful idea to set the mood in motion. The first look did a good job at this too, with a flippy little white jacket layered atop a flouncy beaded chiffon fringed mini dress, a black top hat balanced upon the models head. There were flared tweed suits and mini cape coats, scattered with the addition of a top hat and odd bow-tie or pair of gloves, or both, the ringmasters of Chanel were Virginie's girls, in pleated mini skirts and shorts with corgis and deer embroidered onto their jackets. They wore white patent cap toe boots that laced up to the mid shin.

This season, we've seen an emphasis on 20s and 30s silhouettes, and at Chanel, whether on purpose or by coincidence, you couldn't help but think of Gabrielle's 30s archive with the loose, languid dresses that followed the tweed drum majorettes. 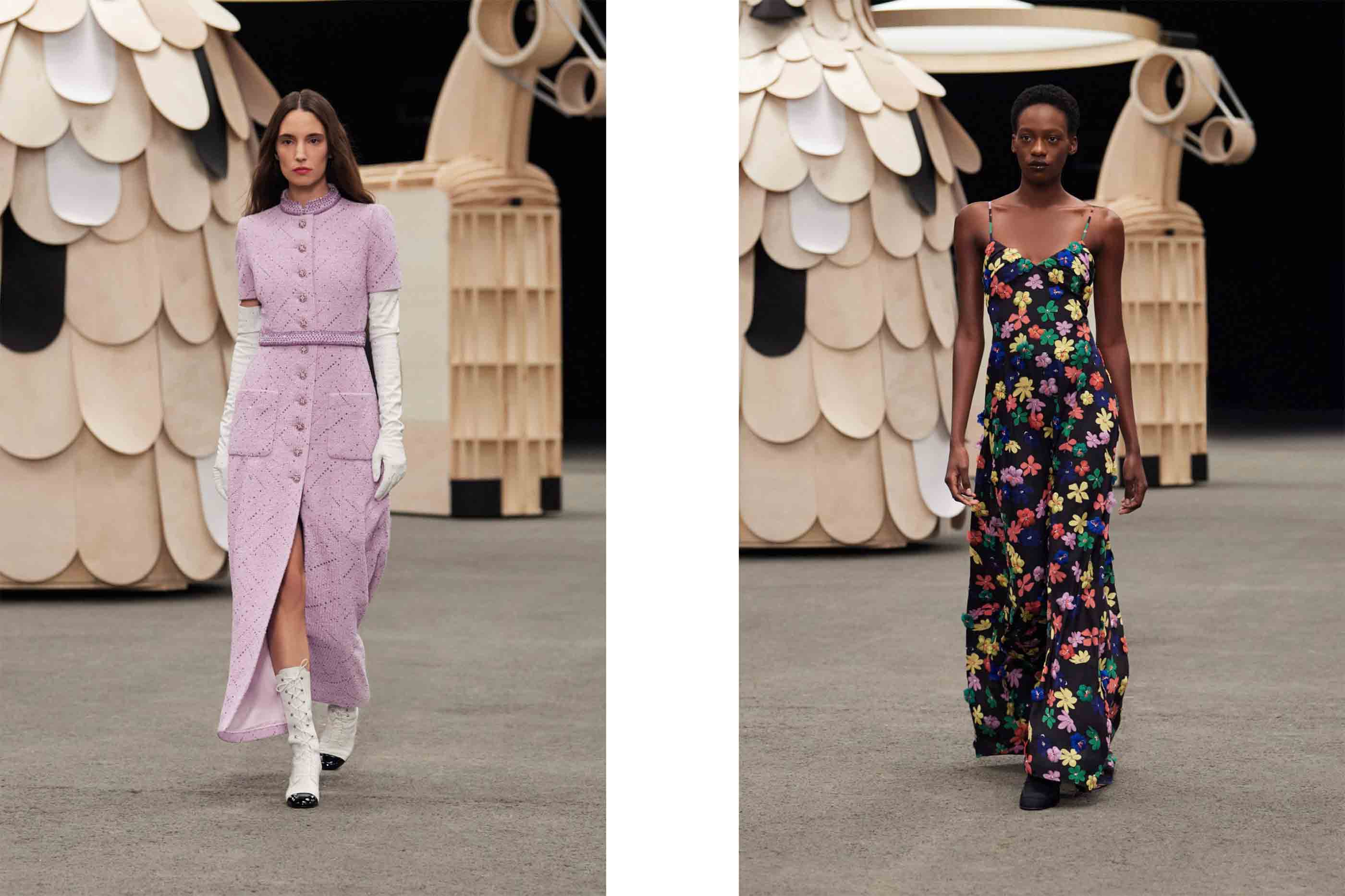 It switched with a pale violet ankle-length coat with cropped sleeves and the introduction of an opera glove, before descending into a crescendo of fluidly draped evening wear. To keep up with the feeling of fun, a black slip dress was adorned with technicolour appliqué daisies. Then there was a translucent white lace gown embroidered with florals and foliage. They were body-skimming until they weren't. Skirts cropped up again and puffed out through layered ruffles of organza and tulle. 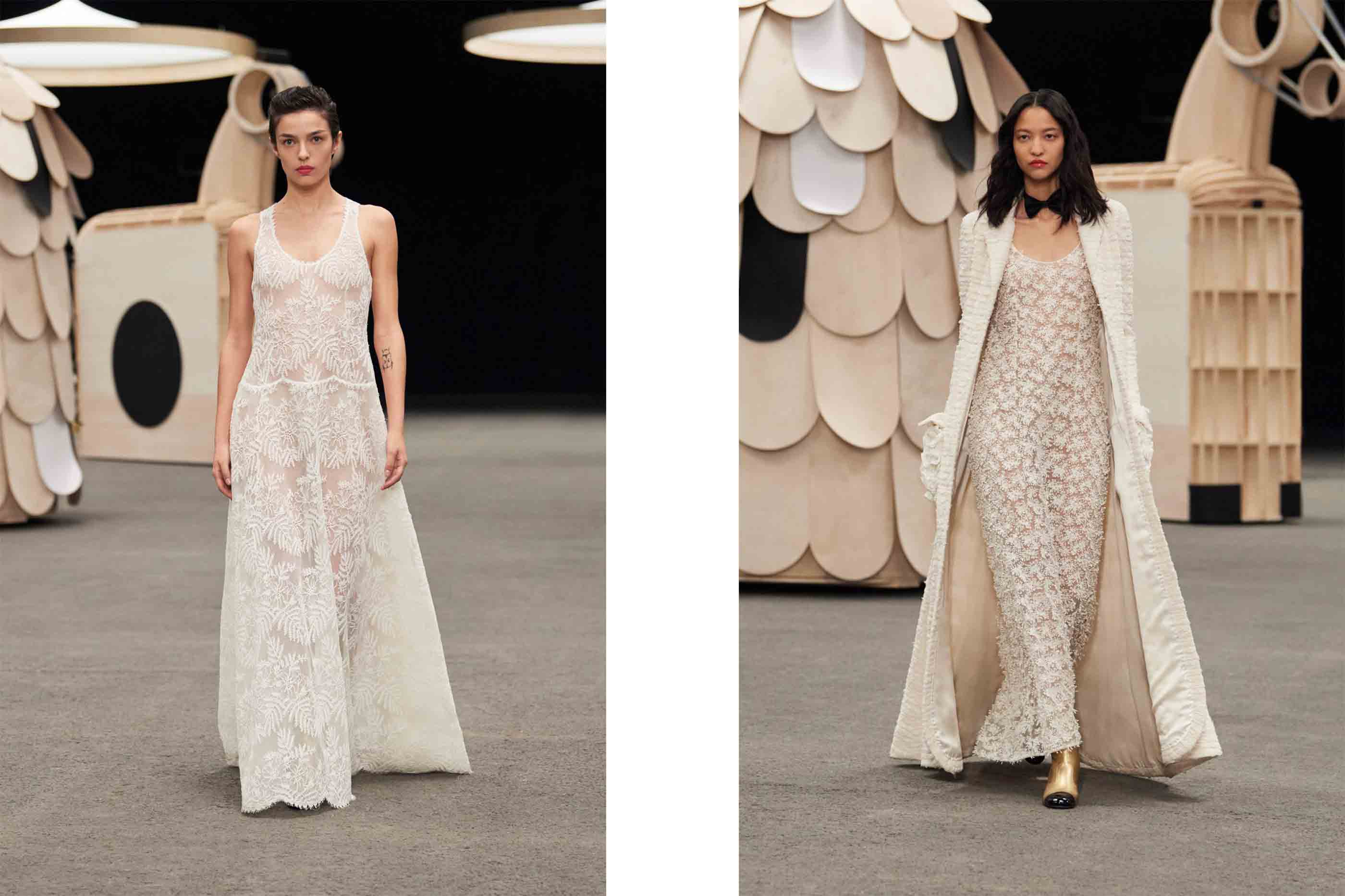 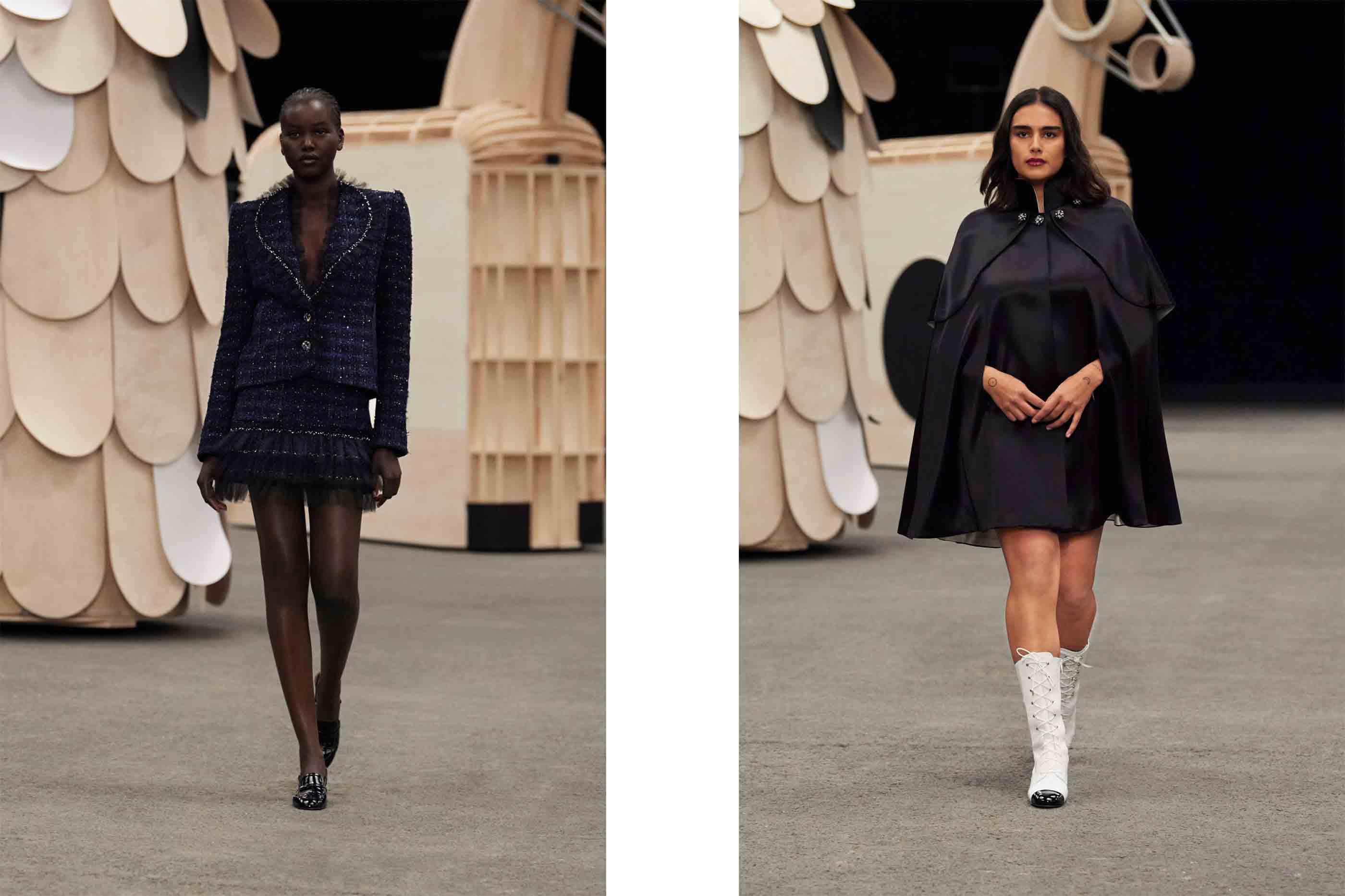 A series of multi-coloured embellished lace emerged, first in the form of slinky leggings and singlets and then in blouses and skirts, before committing to the gowns. The standout – a sheer black slip adorned in glittery leaves which had been double layered with a flouncy, chiffon shift and a crescendo of sequin-dipped ruffles. The most endearing part, were entirely dysfunctional, see through pockets placed right at the hip. 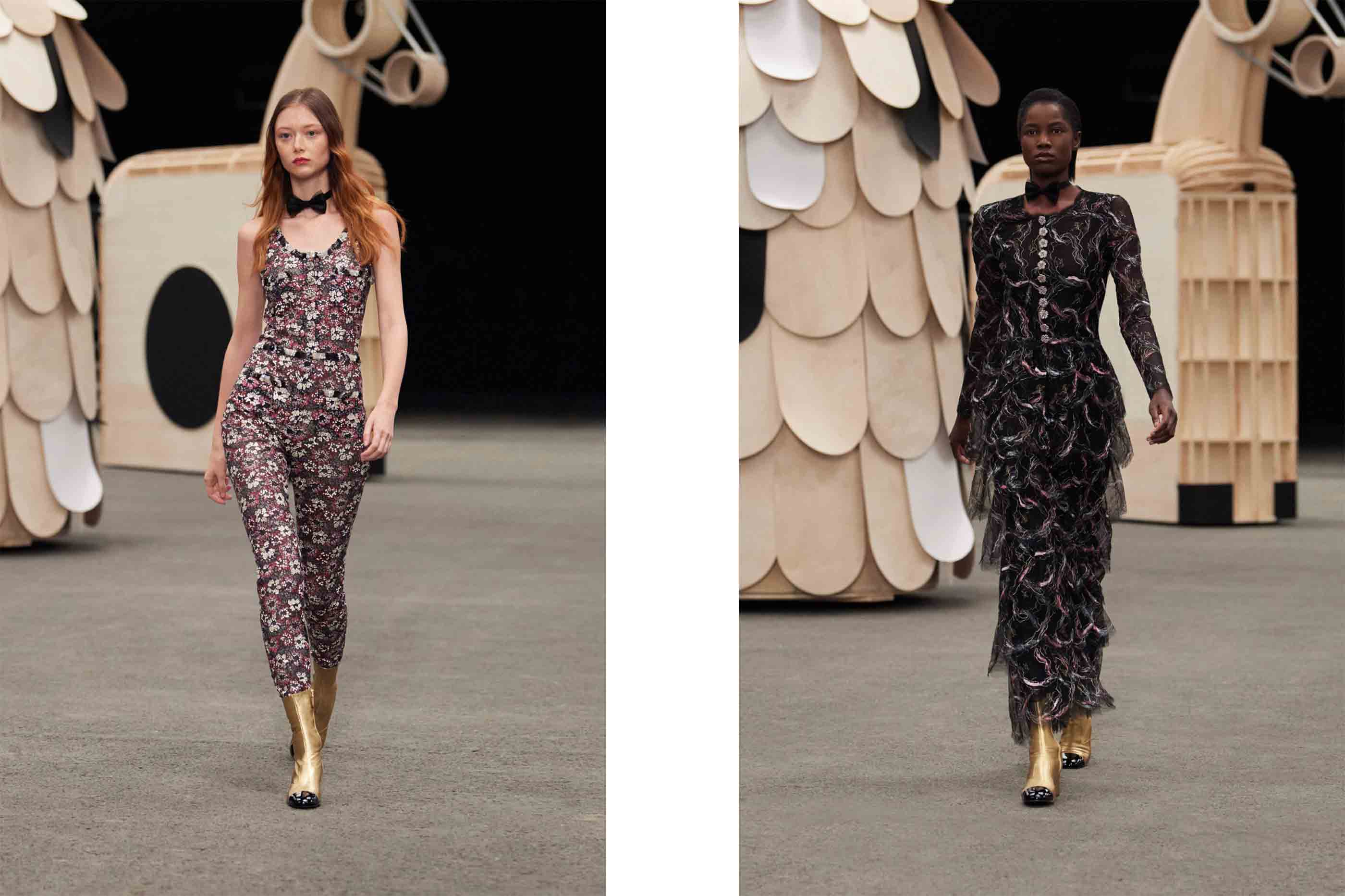 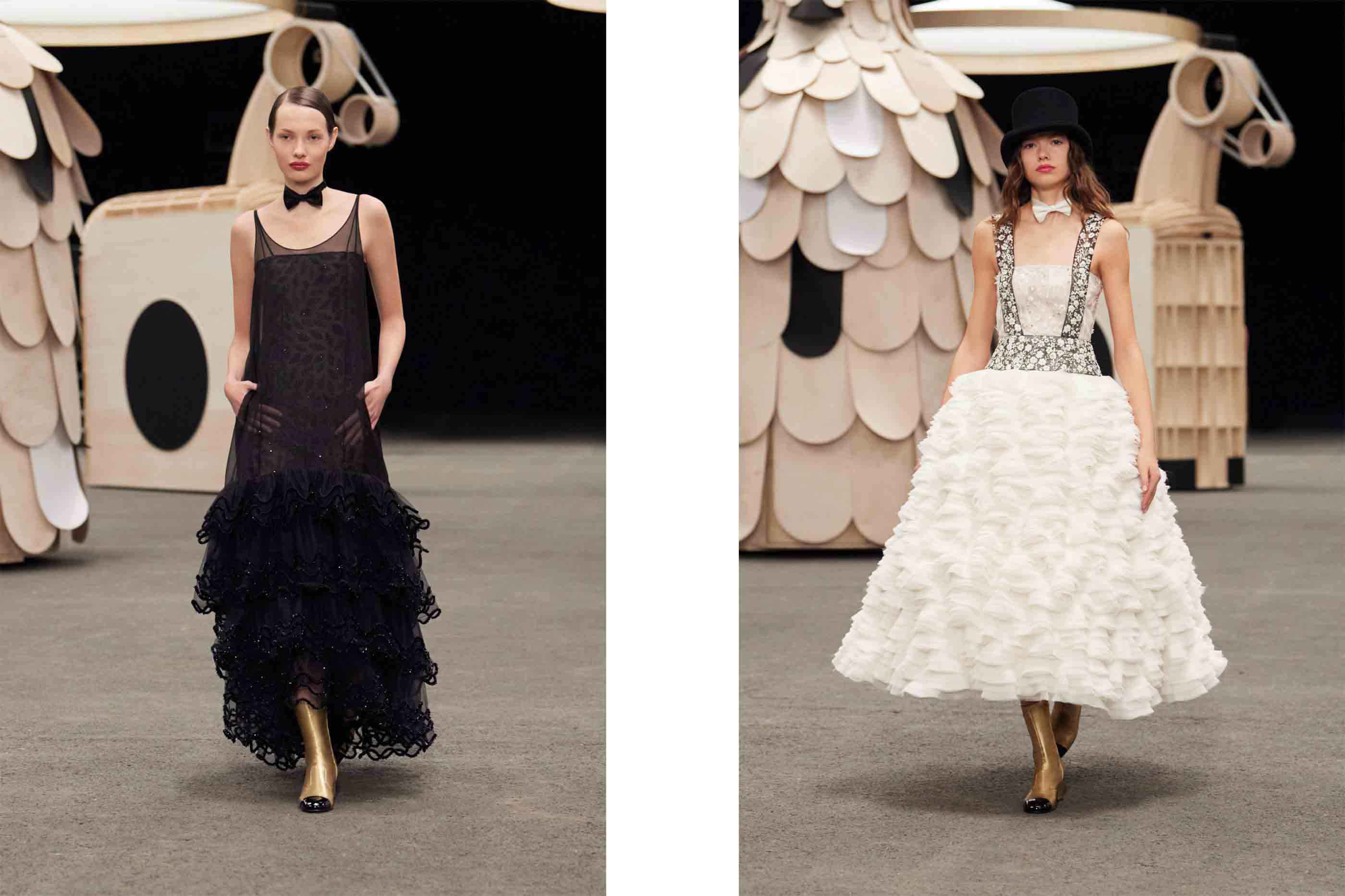 For the finale, a wooden Elephant came trundling into the space, and out popped the Chanel bride. She wore a little white dress and a veil, both dotted with embroidered sequin swallows for a charming and easy interpretation of the modern bride. It was a singular moment that describes Virginie's process as a creative director, less concerned with theatrics and themes (even though this collection was arguably more thematic than others) and focussed on what the woman of today is wearing, and how she wants to wear it. Most of all, in the serious business of couture, it was nice to have a bit of fun. 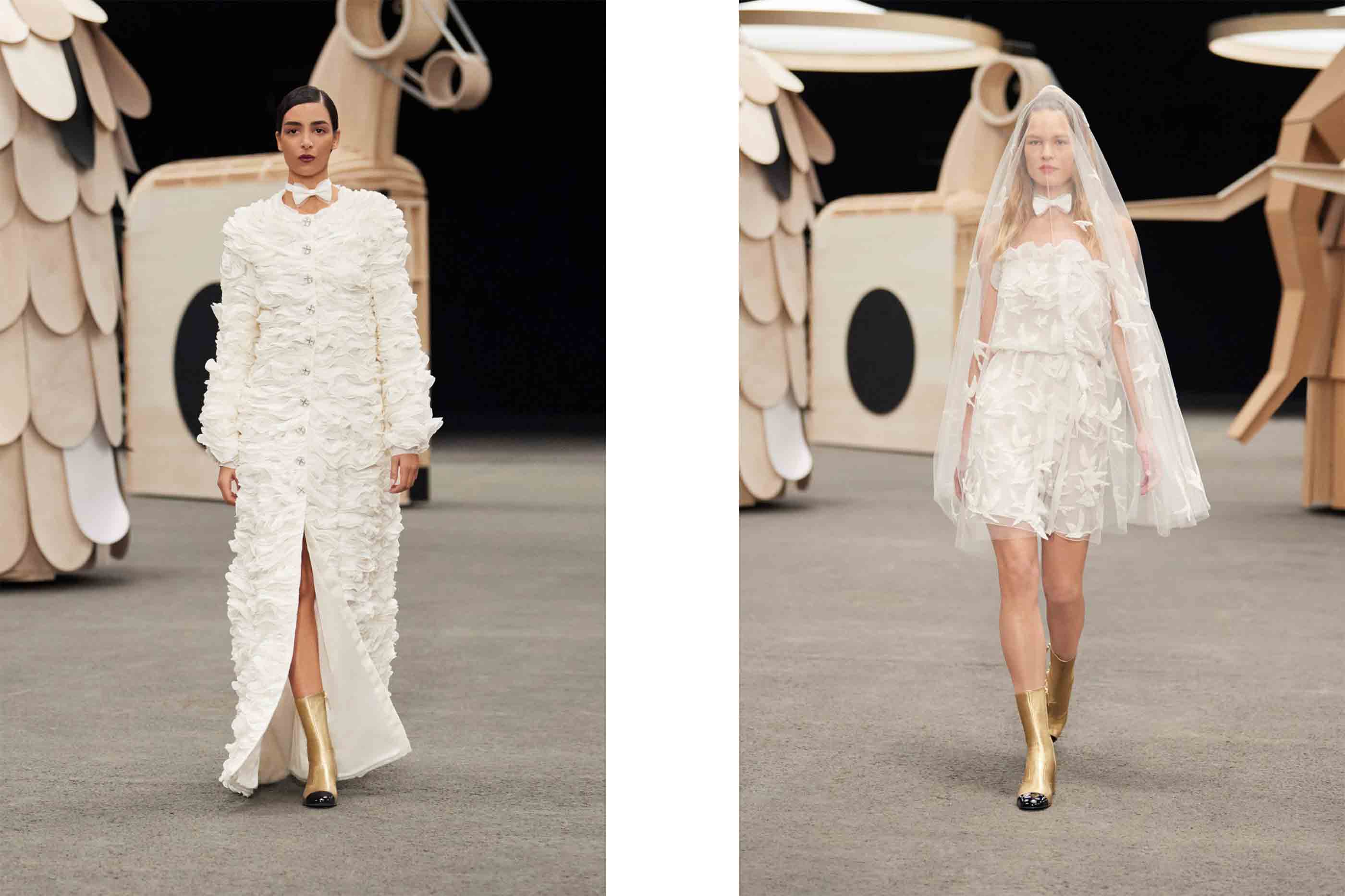