Bridgerton was the somewhat surprising bright side to a rather depressing end to 2020. Fun, flamboyant, visually beautiful and totally addictive, this Shonda Rhimes period drama has us all completely and totally hooked.

With most of having fixatedly binge-watched this show in a week (or less), there is one question we need the answer to: will there be a season 2?

I'm pleased to say that our prospects look good, season 2 is indeed happening. Below is everything we know so far about a Bridgerton and its second (and third, and fourth and more!) season.

It's official, yes. And the announcement came to us through none other than Lady Whistledown - the narrator of the show. A special edition of Lady Whistledown's Society Paper has confirmed the news we've been waiting with bated breath to receive - season 2 is coming.

It's not unsurprising given the popularity of the show; that and the Bridgerton story isn't finished yet. If you're a fan and you've done some deep diving, you'll know that Bridgerton the show is actually based on a series of books. Our first look into the world of Bridgerton was just one book, the story of Daphne and her pursuit to find love. But there are actually seven more books in the series. That's a lot of material for subsequent seasons.

Now we know that season 2 will indeed follow the same format as the books. The next series of episodes will chronicle a new member of the Bridgerton family.

We got our first hint that season 2 was coming after a project titled Bridgerton 02 was spotted in Production Weekly. It's set to film in England, which has since been confirmed as the official filming location for the next slate of episodes. 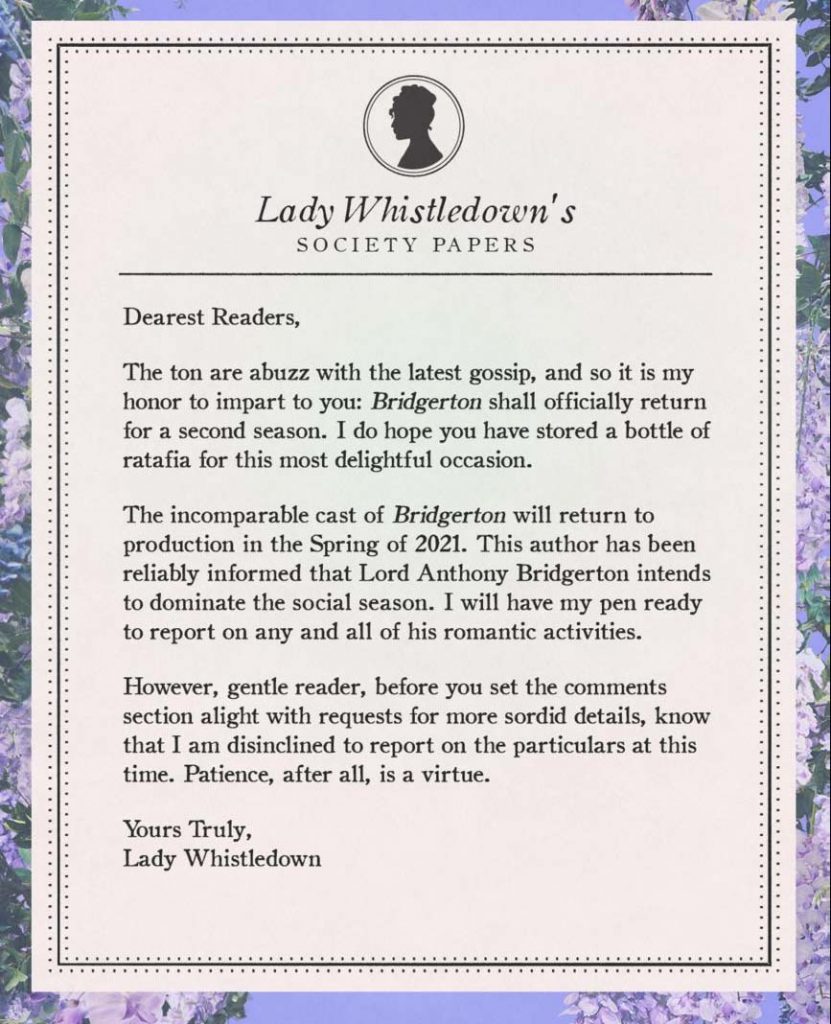 What will Season 2 be about?

While we were all ensnared by the relationship between Daphne and the Duke of Hastings, Bridgerton season 2 won't follow their story.

But which Bridgerton sibling will it be? Well, it's been confirmed that season 2 will document Anthony, the eldest sibling of the Bridgerton family. We'll follow his pursuits for a suitable marriage and all the events that will ensue as determined by the second book of the Bridgerton series, The Viscount Who Loved Me.

One of the cast have given us new details on the Season 2 plotline.

Speaking to Entertainment Tonight, Adjoa Andoh, aka. Lady Danbury revealed that we can expect to see some similarities between Daphne and Simon and Prince Harry and Meghan Markle.

"I really can't say too much nor would you expect me to, but I guess what we do know absolutely is that they're married now. It's a new married life and they have the baby, so there are all the vagaries of what that is like for young people with a new baby."

"I mean Harry and Meghan, what's it like when you have a new baby? How does it affect you when [you are] a young couple with a new baby?"

Will the cast of Bridgerton season 1 be back?

The pamphlet hinted that we will see some of the original cast again, but it will likely be in the background. Expect brief cameos from Phoebe Dynevor and, much to our dismay, a complete absence of the heart throb Regé-Jean Page. There will be a new principle cast with Jonathan Bailey playing Anthony Bridgerton opposite Simone Ashley who is playing the female lead.

Get ready to fall in love with Simone Ashley, who will play Kate in Season 2 of Bridgerton.

When we left this loved-up couple at the end of season 1, there was of course a growing baby on the way. Although Regé-Jean Page won't be making an appearance in Bridgerton moving forward, Phoebe Dynevor shared in a recent interview his character will still be referenced in the story, and that their child might even make an appearance.

"I think he'll definitely be referred to a lot. I think we'll see the baby," Dynevor told The Wrap of how the show will address Page's absence. "And we'll just focus more on her relationship with the Bridgerton Family."

Filming for season 2 has officially wrapped

On November 21, the show's creator, Chris Van Dusen, shared that filming had officially completed in a Twitter post featuring lead actors Bailey and Ashley. Seemingly confirming that season 2 will definitely be landing in 2022.

That’s a wrap on Season Two! So proud of this cast and crew who brought their A-games to work each and every day in this very challenging year. And these two in this photo with me right here. Words are not enough. Coming in in 2022.  #Bridgerton #SeasonTwo #BuckleUp pic.twitter.com/SP8IKXxOJh

Is there a trailer for Bridgerton season 2?

A sighting of the recent trailer for Bridgerton season 2 confirms that this next pivot in the storyline will be just as riveting. In the trailer we only glimpse two characters, Anthony Bridgerton and Kate Sharma, the seasons protagonists. As the scene unfolds we witness a dynamic not too dissimilar to that of Mr Darcy and Elizabeth Bennet. Kate gives Anthony a severe (and not entirely undeserved) dressing down. Already we can see their chemistry as a couple is sizzling.

You can watch the teaser trailer below.

One final taste of Bridgerton season 2 has entered the fray before the new season's March release date. Oh, how we've missed you!

At last, the much anticipated trailer has finally been given to us. Take a look at the official season 2 trailer below.

When will Bridgerton season 2 premiere?