The rise and rise of Tik Tok fashion has also meant the meteoric rise and fall of the micro trend, and the latest accessory to shoulder its way to the front of the trend cycle is the Balaclava.

House names such as Martin Margiela have been producing collections with face coverings since the late 1980's, with more modern references from Calvin Klein and Gucci in Fall 2018. Now, in early 2022, some of luxury fashions biggest names have been capitalising on the growing trend, with brands like Miu Miu, Jacquemus, Marine Serre and most notably, Balenciaga offering versions of knit and fabric face and head coverings to consumers who seemingly can't get enough. From Kim Kardashian and Ye's Demna-steeped endorsement of the balaclava to fast fashion brands churning out countless  knitted ski-mask-like hoods, this is usually when we know that a certain trend has entered the mainstream. And though Belgian designer Raf Simons donned a collection of 65 looks, all wearing Balaclavas for Calvin Klein's 205W39NYC Fall 18 collection, it has only just cut through into the trend cycle in a notable way, which begs the question: why the balaclava, and why now? The balaclava first date back to the Crimean War, where it took its name from the site of an 1853 battle at the Ukrainian port town of Balaclava. During the war, the head covering reportedly helped soldiers fight off below freezing temperatures as they battled in the brutal eastern European winters, before they were adopted by eastern European militias to avoid surveillance. Since then, the balaclava can be seen referenced in music culture, like in the UK's Drill Rap scene, and by iconic fashion designers like Martin Margiela and Alexander McQueen. 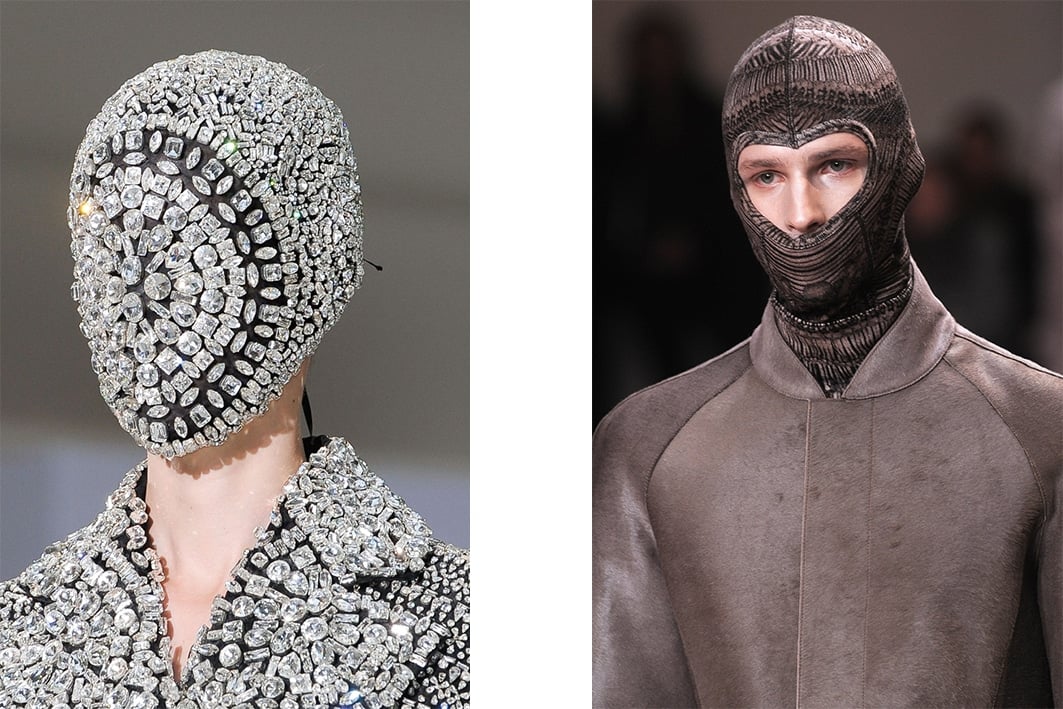 Now, as we continue to navigate life two years into a global pandemic, slightly more subversive trends – especially those that involve face coverings – are swiftly becoming more popular. According to global fashion shopping platform Lyst, searches for balaclavas and knitted hoods have jumped 344 percent from 2020 to 2021, with headscarves alongside silk scarves and bandanas seeing a 102 percent increase over the same time period.

Often times, when Kim Kardashian is seen partaking in a trend, it is both the birth and subsequent death of an item in the mainstream, however when someone of such celebrity is donning trends with cultural history like the Balaclava or fetish wear like she did in  mid 2021, the lasting power will always extend beyond figureheads of hype. In the case of the balaclava, the longevity of the trend lies in the practicality of the garment. While the pandemic has urged us all to take more sartorial risks, the balaclava has functionality on its side when it comes to returning to the trend cycle, and despite designers and retailers putting their own interpretations on the accessory, the fundamental design cues will likely remain the same.

It is, however, not without controversy. While designers like Gucci have made offensive missteps in the past, the current conversation, especially amongst those on Tik Tok, points out that while white folks are able to adopt the trend of wearing head and face coverings as a fashion statement without a second thought, it is not so simple for POC. For many POC, the risk and fear of being racially profiled or targeted due to racism, Islamophobia and xenophobia remains the same as it always has, despite the trend entering the zeitgeist.