When we were first introduced to Gal Gadot as Wonder Woman, there was no question that the Israeli actress brought a fresh perspective to the iconic and historic superhero role. Directed by Patty Jenkins, the pair were a film match made in heaven, and the release of the latest film, Wonder Woman 1984 has proven that their creative chemistry hasn't gone anywhere. Not only has the new film been commended on its excellent storyline and cinematography, but for those of us who appreciate the beauty of fashion in film, it certainly delivers.

While there's certainly plenty of noteworthy sartorial moments throughout the film, the symbolic homage to Wonder Woman's indestructible gold cuffs is perhaps the most considered. In her alter ego, Diana Prince is dressed in the iconic Tiffany & Co. Elsa Peretti® Bone cuff in 18k yellow gold – a groundbreaking design that was introduced to the brand 50 years ago and continues to stand the test of time.

In a statement, Jenkins expressed her long history and love affair with the iconic piece, revealing, “Elsa Peretti® Bone cuff is still, to this day, the most stunning piece of jewellery that I’ve ever seen. I first became aware of this work of beauty when I received a small one as a gift from an ex’s mother. I loved it immediately... My love of the cuffs became magically relevant when I directed the Wonder Woman films, as they marry perfectly with the character. As a result, we featured them as the one piece of jewellery that Diana Prince would choose in Wonder Woman 1984." 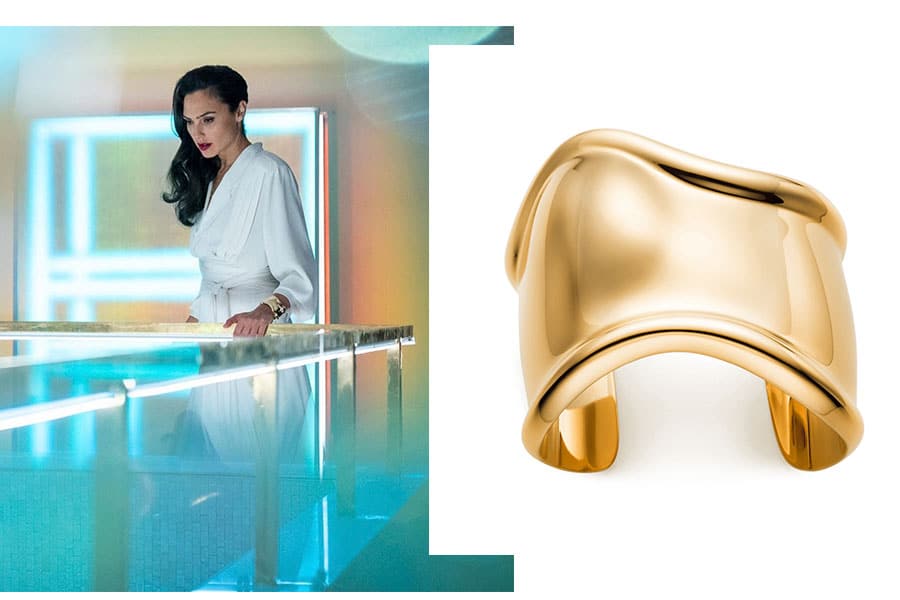 Like Gadot’s Diana Prince character, the cuff represents both strength and grace, while serving as an icon that is eternally modern and sophisticated.

“I’ve always loved Elsa Peretti’s legendary Bone cuff as it is a symbol of power and glamour. When Wonder Woman 1984 director Patty Jenkins decided to outfit Diana Prince in it, I thought it was the perfect piece of jewellery to pay homage to the character’s strength,” shares Gadot.

Last week, it was announced that Warner Bros. films such as Wonder Woman 1984 and the highly-anticipated adaptation of Dune would become available to stream on HBO Max the same day it is released in theatres. The landmark decision was made in response to the unprecedented impacts the Coronavirus pandemic has had on the film industry globally.

WarnerMedia chair and CEO Ann Sarnoff shared in a statement, “With this unique one-year plan, we can support our partners in exhibition with a steady pipeline of world-class films, while also giving moviegoers who may not have access to theatres or aren’t quite ready to go back to the movies the chance to see our amazing 2021 films."