As the year winds down, our recommendations have soft edges and a calmer pace. The RUSSH team are feeling contemplative and when they're not, they're leaning into easy joy and old comforts. Summer fever is on the air too, which means disco has us dancing into the holidays singing Gloria Gaynor's I Will Survive – at least that's true for Meg, our digital operations manager. Find everything the RUSSH editors are watching, reading and listening to in December, below. 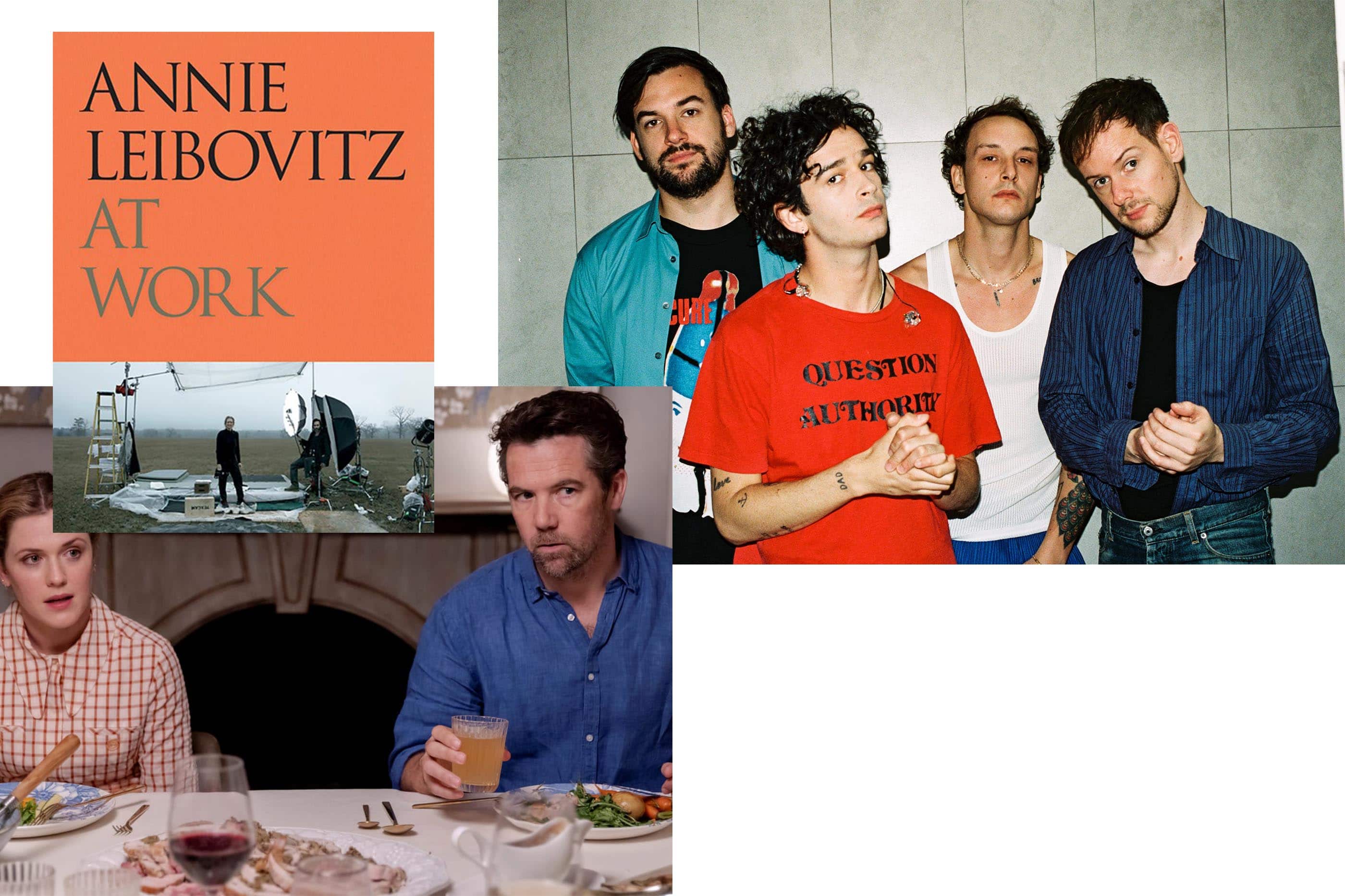 Watch… After finishing The White Lotus like the rest of us, my Binge account led me to the trailer of new Australian comedy Colin From Accounts. I thought "why not?" I love a good Aussie show, and it’s a fun game to figure out where in Sydney they filmed each scene. What I thought would be good background noise for my TikTok doom scroll turned into an attention grabbing, laugh-out-loud show with lighthearted jokes and delightfully awkward comedic timing sprinkled amongst tender moments between two strangers and a dog.

Read… I’m taking time to rediscover some of the greats in photography, and am reading Annie Leibovitz’ At Work. The best news for a seldom reader like myself is it has pictures :)

Listen… My Spotify wrapped reminded me to never forget where I came from, and so I’ve been rediscovering my love for The 1975. My day ones, my forever loves, the top of my charts every year, I will be loyal forever. Happiness from their latest album is on repeat for summer. 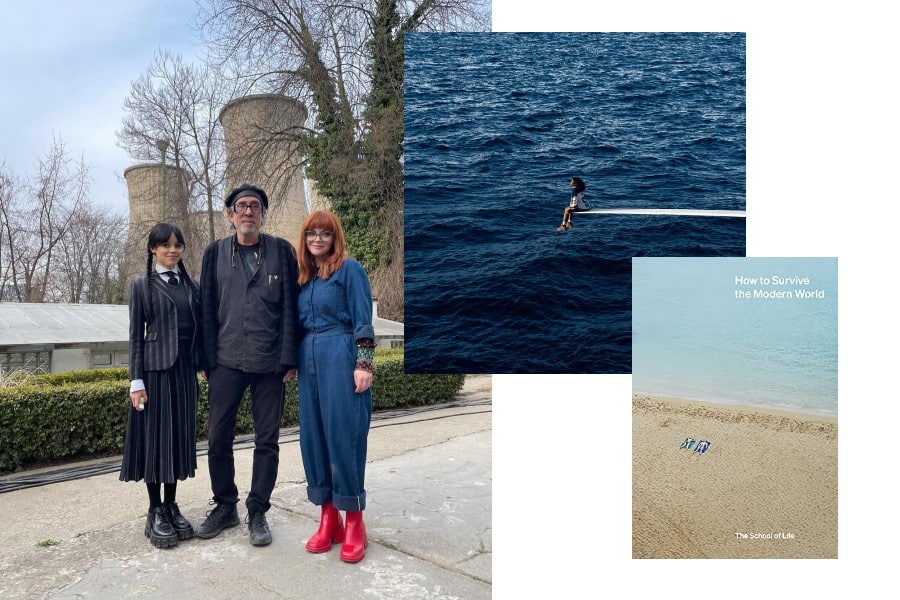 Watch… Like basically the rest of the world, I got completely sucked into Netflix’s hit-series Wednesday, and honestly, it didn’t disappoint. It was nice to awaken my childhood love for the Addams family and to watch something that felt a little silly in all the right ways. The perfect viewing material for this time of the year!

Read… Normally, it can be a bit of a challenge to carve out time to read for leisure this side of Christmas, but The School of Life’s How To Survive The Modern World has provided the perfect anchor during a period where everything seems to be moving too fast. Essential reading.

Listen… SZA’s new album, SOS, of course. One hour of pure bliss, and great for any road trips you have planned this summer. 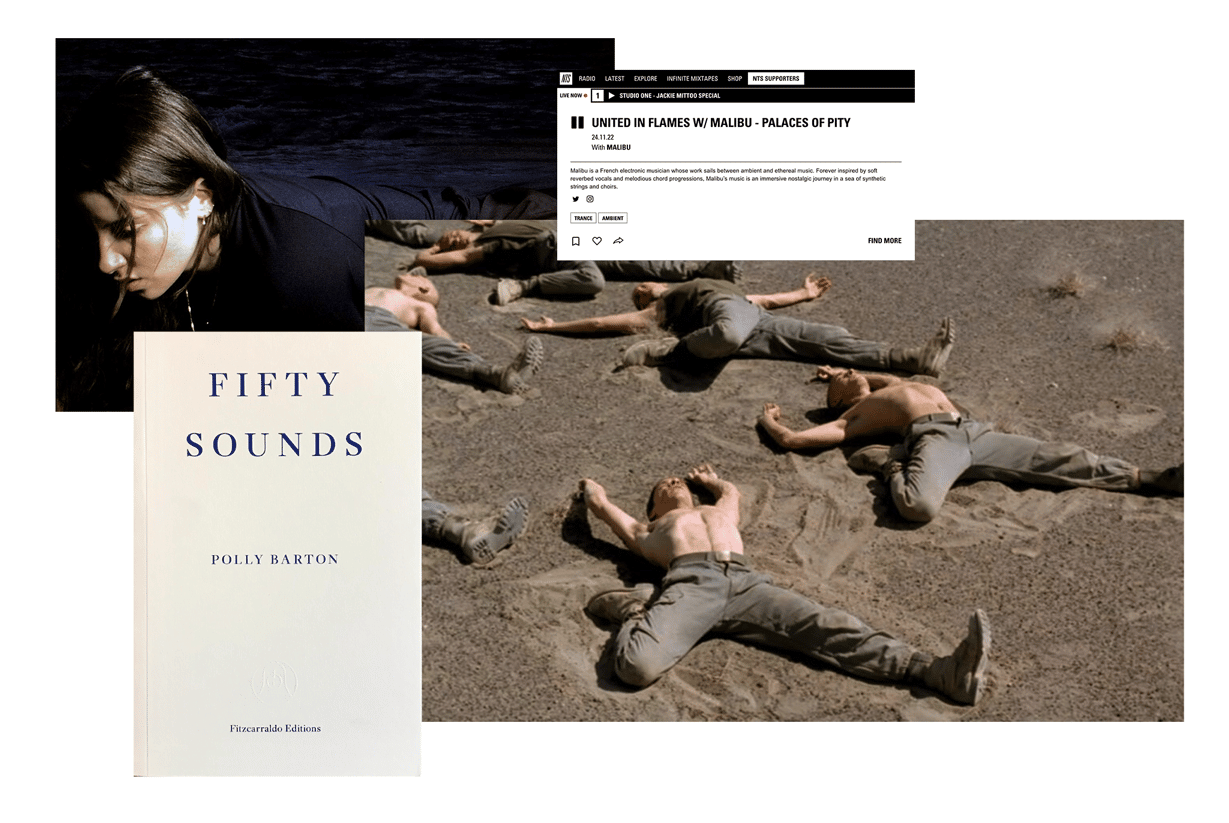 Watch…The visual masterpiece that is Beau Travail. Every frame feels like a photograph.

Read…Have you ever tried to learn a language? I have (unsuccessfully). I can’t articulate exactly what it feels like, but Polly Barton can. In her intuitive and sensitive novel, 50 Sounds she unpacks her experiences learning Japanese and becoming a translator. Reading the book feels as though she’s describing something you thought but couldn’t quite put into words about place, words and life.

Listen… After the year we’ve just had, December is making me want to listen to serene, ambient music which allows my crowded brain some much needed space to think. One of my favourite sources of music discovery is NTS. Here, I stumbled across the monthly show UNITED IN FLAMES W/ MALIBU - PALACES OF PITY which sails between ambient and ethereal music. Listen for meditation, relaxation and regeneration. 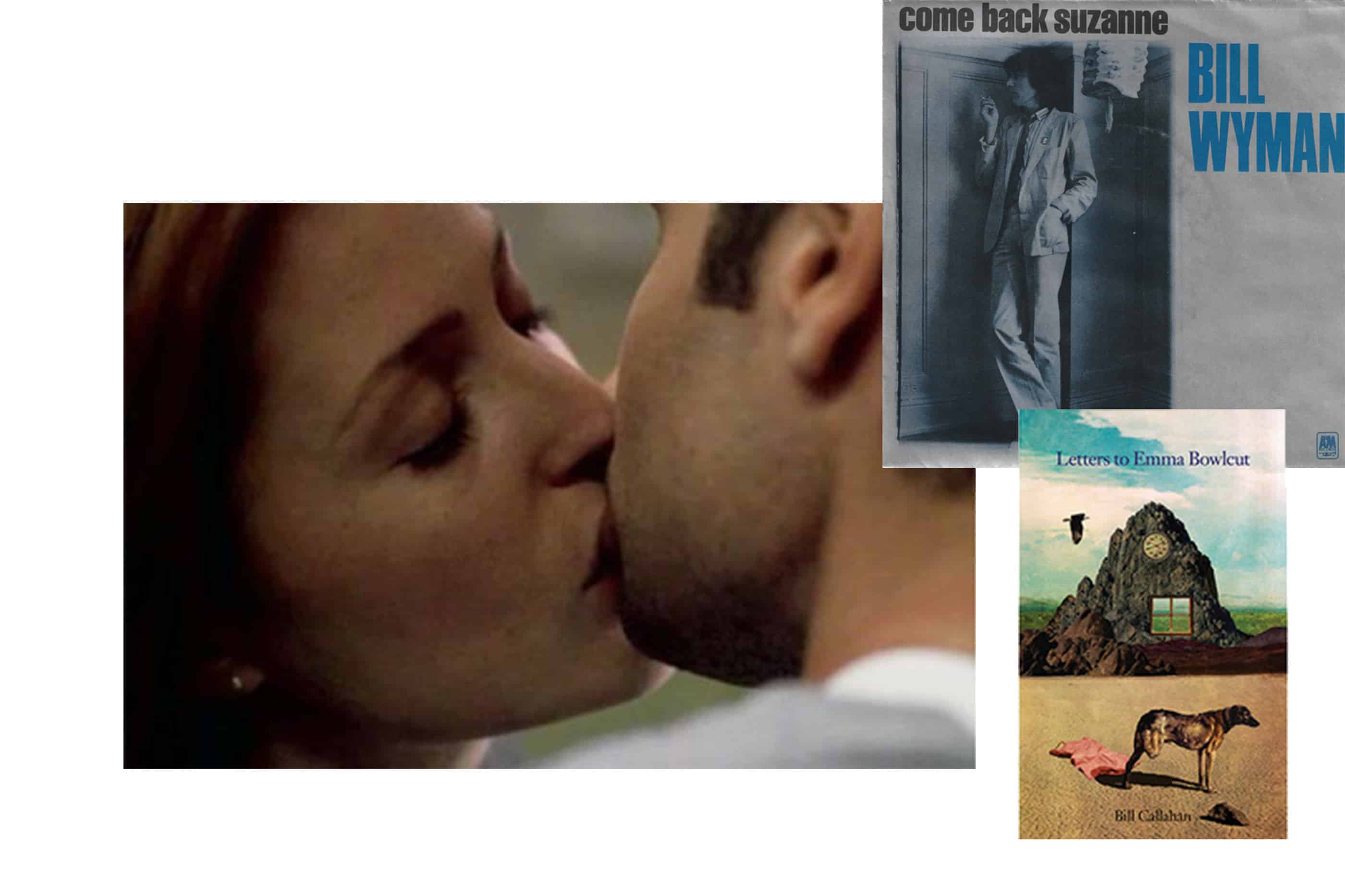 Watch…The X Files. I missed it the first time round and have been indulging heavily. The clunkiness of writing in the early seasons, the 90s graphics and the conspiracy theories provide pure comical escapism whilst causing me to consider the fate of the world. I also deeply appreciate the sexual tension between Mulder and Scully and will not stop watching until they get together.

Read…Letters to Emma Bowlcut by Bill Callahan. I borrowed a water damaged copy of this from my partner’s apartment and devoured the epistolary novella in two sittings. Mysterious, metaphorical, musical, romantic and weird.

Listen…to the good advice of friends. Also listen to bad advice from friends. Avoid all Christmas music and instead listen to Come Back Suzanne by Bill Wyman, its life affirming to see how far feminism has come since 1982. It is also much funnier. 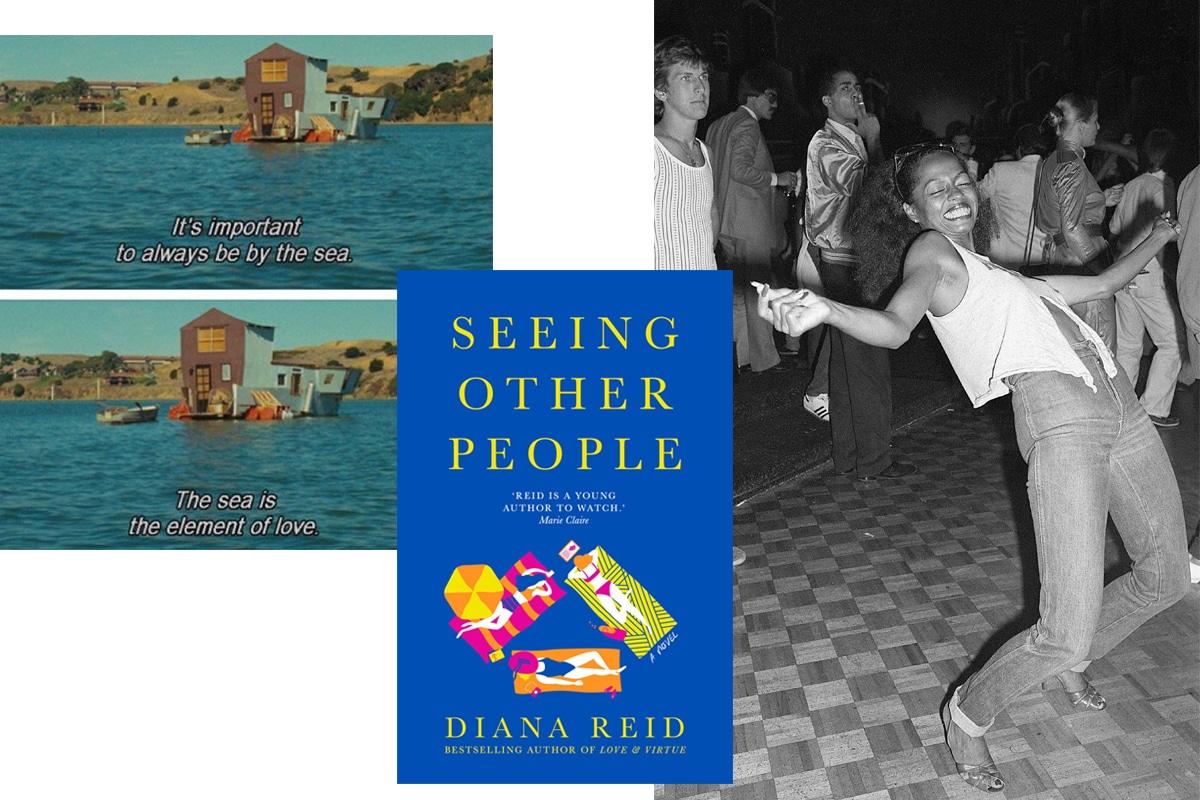 Watch… People. A weird one I know, but honestly all I want to do at the moment is sit on a beach without a care in the world and watch the weird and wonderful people of Bondi Beach go about their daily lives.

Read… Seeing Other People by Diana Reid. This one is on my Christmas wishlist as I loved Reid’s first novel, Love & Virtue. The story of two sisters, it navigates the boundary between being self-fulfilled and selfish – something which I resonate whole-heartedly with as a woman in my early 30s. Set in Sydney, it’s a rare pleasure to read fiction about the city and the culture you actually live in. I’m confident this one will be a winner.

Listen… After listening to the You’re Wrong About podcast episode on Disco Demolition Night I’ve got a new found love for disco. Maybe it’s the feeling of summer in the air, or the copious amounts of dancing and horrendous karaoke singing I’ve been doing recently, but feel good disco is my go to any day of the week at the moment. Start with Gloria Gaynor, I Will Survive and see where Spotify takes you. 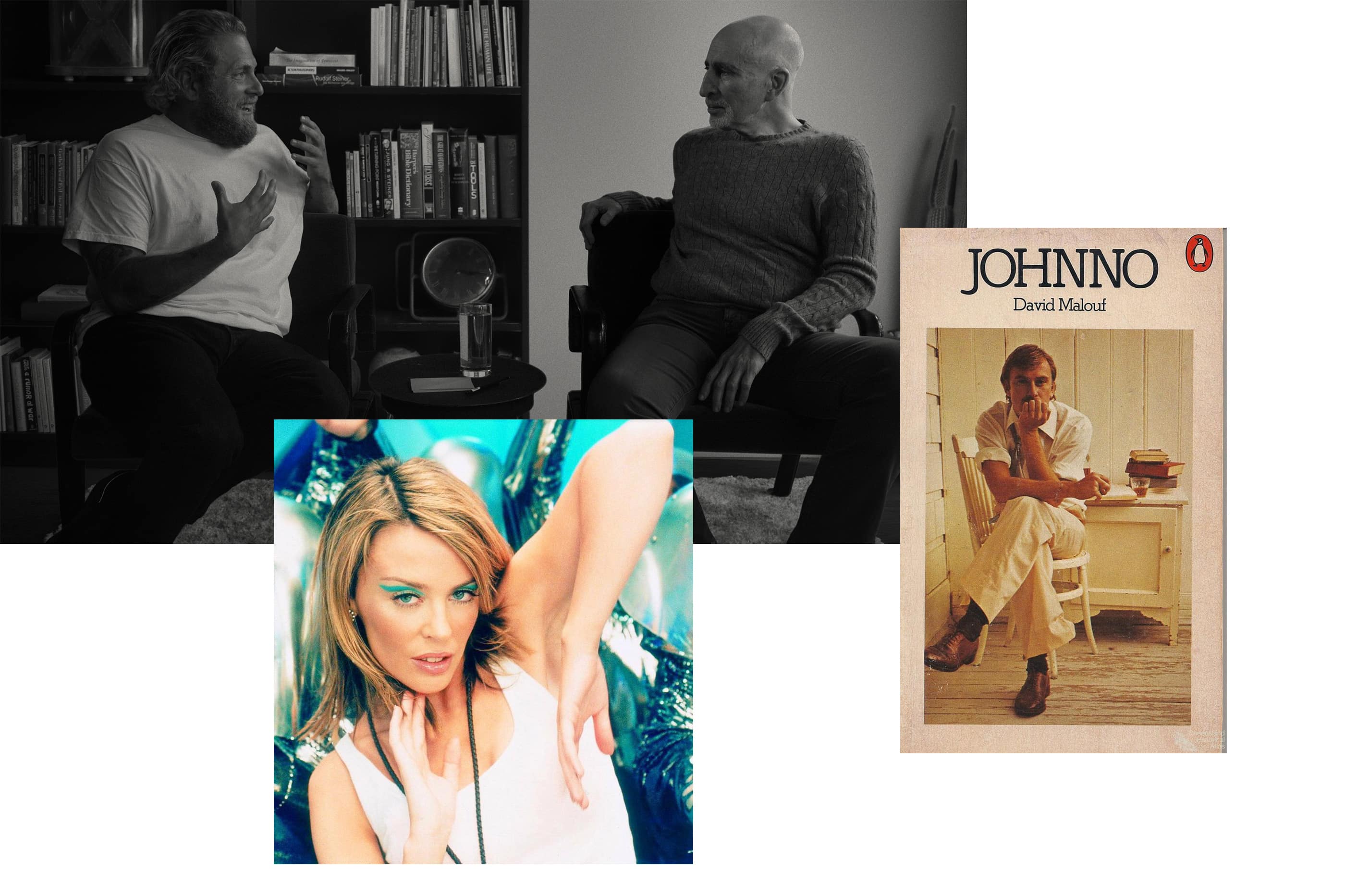 Watch...Stutz. Jonah Hill enlists his psychiatrist Phil Stutz to share his own unique model of care. As you can imagine, the dynamic between the two is delicious. But the most nourishing thing is the way Stutz breaks down how to nurture your "life force" and other helpful tools, with complementary drawings and accrued wisdom. It's definitely something that will inform my own approach to the New Year.

Read... There's hasn't been a great deal of time for reading for pleasure in the lead up to Christmas. But I've got my holiday reading list lined up. There's the newest book from Jerry Saltz on there, an Elena Ferrante pick and Johnno by David Malouf.

Listen...It's December so River by Joni Mitchell gets the occasional spin. Otherwise, I've got big plans for Kylie's Love At First Sight when my OOO email goes up.

PREVIOUS
The best Christmas movies according to the RUSSH editors
NEXT
Warm skin and cool water: A holiday reading list for languid days