Sometimes an artist falls into your world with such chaotic grace that they become a part of your life, listening becomes your ritual and their voice defines your current chapter. It is as though their work has found you just when you needed it; that is most certainly the case with Sarah Mary Chadwick and my record collection. Although she has just released at least her 9th record, Me and Ennui are Friends, Baby, she has archives of treasures spanning many years that track her life. We had the pleasure of speaking to her and beginning a relationship with her honest, penetrating, intellectual and feeling voice.

Sarah agrees to speak to me quite late on a Wednesday evening having had dinner with her then soon to be in-laws. She’s about to get married and laughs giving an understated "yeah it's good" when I ask her how she feels about it. We speak about how her life has been during this last year, and being Melbourne-based, the lockdown has played a large role, and clearly changed her pacing as she goes from "dead time and tv to trying to fit a life time’s activity in one week." With no shame, Chadwick tells me a lot of her time has been spent watching ‘Come Dine With Me’ and reviews her dinner that evening in the style of the show. "Company amazing, the host made a lot of time for everyone so, had a great time, I’ll give it an 8/10."

Chadwick has just finished a series of shows to promote her album and after a long break, I ask her how it feels to come back to playing live. "I was quite nervous to be honest. I don’t mentally register my anxiousness but then I look back and think I did go to the toilet heaps and did have the attention span off about 2 seconds for every person I encountered, so I probably really was quite nervous." She laughs warmly and then continues, "It was nice to have a year off which I have never had in my life, ever in my entire life, but then the worry of have you broken it? I generally play quite a lot and quite regularly so I was worried I was rusty, but it was good."

With a voice such as Sarah Mary Chadwick’s that is so direct, earnest and sophisticatedly raw, I’m curious to know if there is a difference between her studio voice and live persona. Are the things she would refer to as mistakes just embellishments of character that we wouldn’t be privy to unless we are at the live show? "When I play live, I deliberately and unconsciously flow over mistakes and accidents quite easily, so I’m quite comfortable stopping if I fuck it up or stopping to talk about what the song is about. I think I was unnecessarily anxious but quite daunting after having a year off."

You know, not everyone wants to go out for a horrible read of someone’s diary, so I try to keep it pretty light as a counterpoint.

Sarah has been writing and performing for some time now and reflects on her age regarding her subject matter. "As I get older I’m aware of the content being bleak and heavy, and aware that fact people are more forgiving of this as an older person than when I was younger." She is deeply self-aware and continues, "You know, not everyone wants to go out for a horrible read of someone’s diary, so I try to keep it pretty light as a counterpoint. I don’t want it to seem gratuitous or exploitative, either for me or the audience, so that gives me liberty take a pause and if I forget a lyric. It alleviates a lot of the gravity of the sentiment, which I used to be concerned about, but now lends itself to a more enjoyable performance. And it’s more true to life as everything is funny and sad at the same time. So, it kind of fits more to me."

Sarah’s music does not shy away from intense or difficult subjects, she tackles failing relationships, death, change and age with what seems to be a simple bravery, as I ask her about the politics within her lyrics. "I try not to think too consciously about my political environment. This isn’t a conscious thing but I think I think retrospectively it has served me better to talk about what I know about, to write about me and my environment rather than the world and its environment. I can generally talk drunk politics to people but I don’t think that that’s very important." I’m intrigued by how she writes about her sexuality and body so ask about the femininity in her work, she pauses to think before telling me. "I try to speak as candidly as possible and accurately as possible about what I think. If a feminine aspect come through, it just comes from myself." 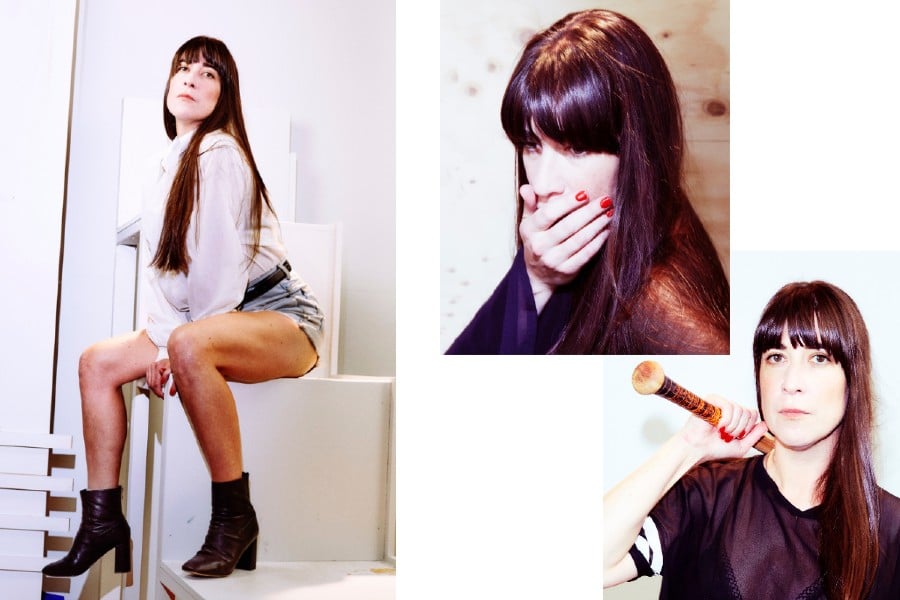 "I guess it’s more of an individual thing, I try and keep the overall structure of sexuality out of it and keep it more personal."

As our conversation progresses, it becomes apparent just how open and erudite Sarah is but she confesses the difficulty in speaking about this latest record. "It’s been hard talking about the record at large, the record is super explicit, not r rated, just prescriptive and it’s hard for me to elaborate further. Someone will ask for a track by track break down and I feel like asking what do you mean? It almost feels like backtracking trying to explain it."

We move into Sarah’s influences in general and what she takes away from the art she likes. She tells me, "I started doing music in high school, so it's been 20 years. I was more interested in writing and poetry than music. I don’t know, things like Carver etcetera. I like things that seemed to have very little pretension about them, not very many layers. I like things with a very clear line of people’s thought and what they are expressing that is unfettered by outward influences."

She likes art with an uncluttered intent. ‘I quite like focused things, so what then comes out is quite realised and quite concentrated. I like quite small tight ideas. I like things that are quite kind to people and kind to failure, but that are also funny and mean at the same time.’

What are you reading at the moment? "I just re-read the sequel to ‘Gone with the wind’ for the one-millionth time which is quite embarrassing." (It’s not). "I’m kind of lucky that I read heaps as a younger person and now that I’m older and my attention span has wained I can still hold my own in a literary conversation. I’m also lucky to have a sense of things, like, I haven’t read ‘I love Dick’ but I’m pretty sure I don’t like it."

I don’t put any emotion into painting, I almost sit down and do it as though it is a chore, but when I’m songwriting it’s like my diary time.

Sarah Mary Chadwick is also a visual artist on top of her musicianship, she has painted self-portraits for many of her record covers. I wondered if there was a symbiotic relationship or some kind of interplay between the two art forms. "I’ve always taken music more seriously than painting, in that I’ve thoughtfully tried to make it better. I do think a lot about what makes a good song, what’s a good turn of phrase and what’s jarring. So, I guess the visual art comes off the back of that. I did 100 individual covers for the new record not realising how much work it was going to be (laughing) Yeah I can easily do that, and then when I sat down to do it I noticed myself getting noticeably better at it, and now they are only taking 2 hours!" She tells me that she tends to just do one or the other regarding waiting and songwriting. "I don’t put any emotion into painting, I almost sit down and do it as though it is a chore, but when I’m songwriting it’s like my diary time."

Why do you own art work? "I guess it’s a bit of an unconscious existential thing of trying to claim something for yourself. I’ve been continually doing self-portraits on covers,  and I mean these are all retrospective thoughts, but I think maybe it’s a sense of ownership. People come up to me after a show and will say ‘oh that’s so relatable the exact thing happened to me', and it can be a bit of a robbed feeling in that I’m putting things that are super important to me out, so I think that’s why in a funny and meaningful way I do that."

Robbed? "Yeah, I was speaking to someone about that ‘at your leisure’ song and she was saying ‘oh this exact thing happened to me and this guy I’m seeing.’ I just laughed. It doesn’t matter how specific you are with the details, I mean obviously I’m glad because something is obviously working if people are finding something is that relatable when I’m trying to make it about myself. And, I’m kind of proud about that because I wouldn’t want it to be too much like a sermon. I mean, I’m doing it for myself but it is important to me that it is received well, but I think that’s why I put in details like dates and times and things like that, purely for my own satisfaction. To keep a little bit of its close to myself. I put these things in there so even though I’ve given it away its still my song."

What Sarah Mary Chadwick gives away is something that we are lucky to be privy too. Whilst there are moments of great relatability in her work, there is a completely refreshing and unique voice, providing commentary on her own life which will occasionally apply to ours. She’s got us in a full mood.

A glorious collaboration between one of Australia’s most celebrated acts Lime Cordiale and effervescent songstress Iluka.