When it comes to impeccable, mid-century design, Eames is a name quick to roll off the tongue. But as design fiends will know, acquiring an Eames Lounge Chair or any one of their plywood pieces will either cost you greatly in either time or money. So it may delight you to know that Eames are entering into their first ever footwear partnership and with none other than Reebok. Rarely do our feet get to see this kind of Reebok x Eames action.

Announced just October 5, the collaboration draws on the core design principles favoured by Charles and Ray Eames. That is, that neither form nor function need to be favoured above one another and that both are necessary to create joyful ways of living. Of course, nothing says functional like the practical and versatile Reebok sneaker - a staple in every wardrobe. 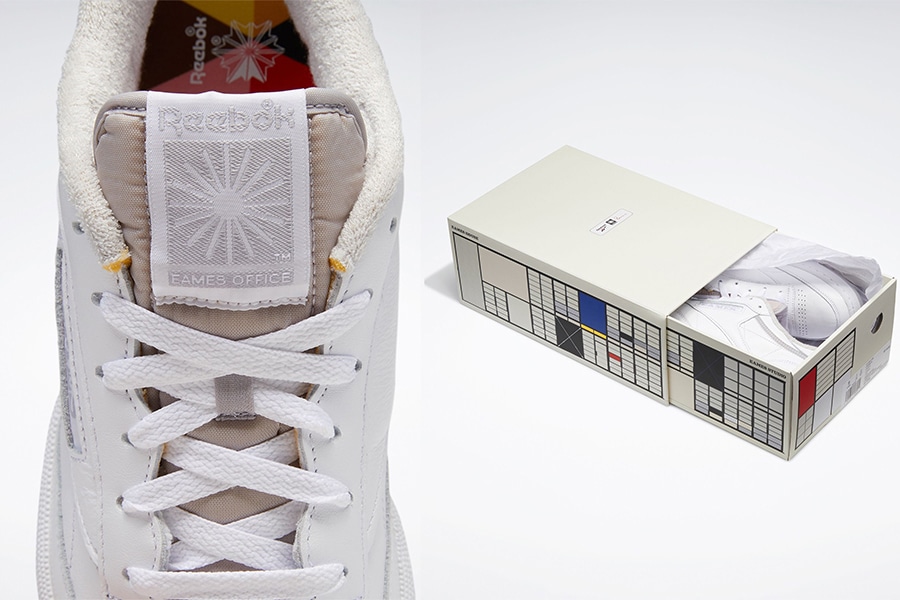 Just as Charles Eames stated that the job of "the designer is basically that of a good host— anticipating the needs of the guest," the Reebox x Eames collab centres the wearers desires. Available in Black and White, the drop reimagines Reebok's heritage Club C style with comfort and accessibility in mind. Both iterations are crafted from leather and feature all the hallmarks of Reebok's bestseller like the original tongue tags, squared-off window boxes, perforated toes and cushiony soles. In a nod to Eames, the sneakers possess grey soles, woven 'Eames' tags and other markers like colourful triangle-printed insoles - a homage to Ray's paintings - and yellow accents.

In terms of the packaging, the shoe box was modelled after Eames House - Case Study Study House No.8 - in Pacific Palisades, Los Angeles. Built in 1949, Charles and Ray Eames designed and then lived in the home until their passing and it stands as an exemplar of their post-war innovation - with an aesthetic style redolent of Piet Mondrian - while still holding onto the warmth and function of a family home.

For those who are wondering, you can purchase this drop on the Reebok website from October 15 and each pair will be $180 AUD. Although, stay tuned as a second collection is expected for later in the season, taking the form of a colourful tribute to Ray Eames and featuring a reproduction of her 1939 Composition painting and the Eames Dot Pattern textile print. We'll be sure to keep you updated!