London's Printworks is a giant, cavernous post-industrial print factory that, these days, is best known as an events space and nightclub. When the latter is in session, a long bar is set up down one side of the warehouse space. This is where Raf Simons decided to debut his SS23 collection – atop the bar.

The show was just short of a month late. Simons made the choice to postpone in acknowledgement of The Queens passing alongside many British designers set to show on the schedule. To present his first collection as part of LFW atop a bar in a warehouse felt classically Raf, a designer who has always been a facilitator of energy, but knows how to tap it, too. With a cost of living crisis on the doorstep and the weight of Brexit hanging heavy on the mantle, Simons has been around long enough to know that when a recession comes crawling and a Tory government is hell bent on rolling back the state, a tide of rave culture is coming in. This was when Simons was working on his first collections, on the coattails of the rave scene that hit the UK from 1988 into the early 1990s. His spring Summer 23 collection felt like a coming back to his origins. 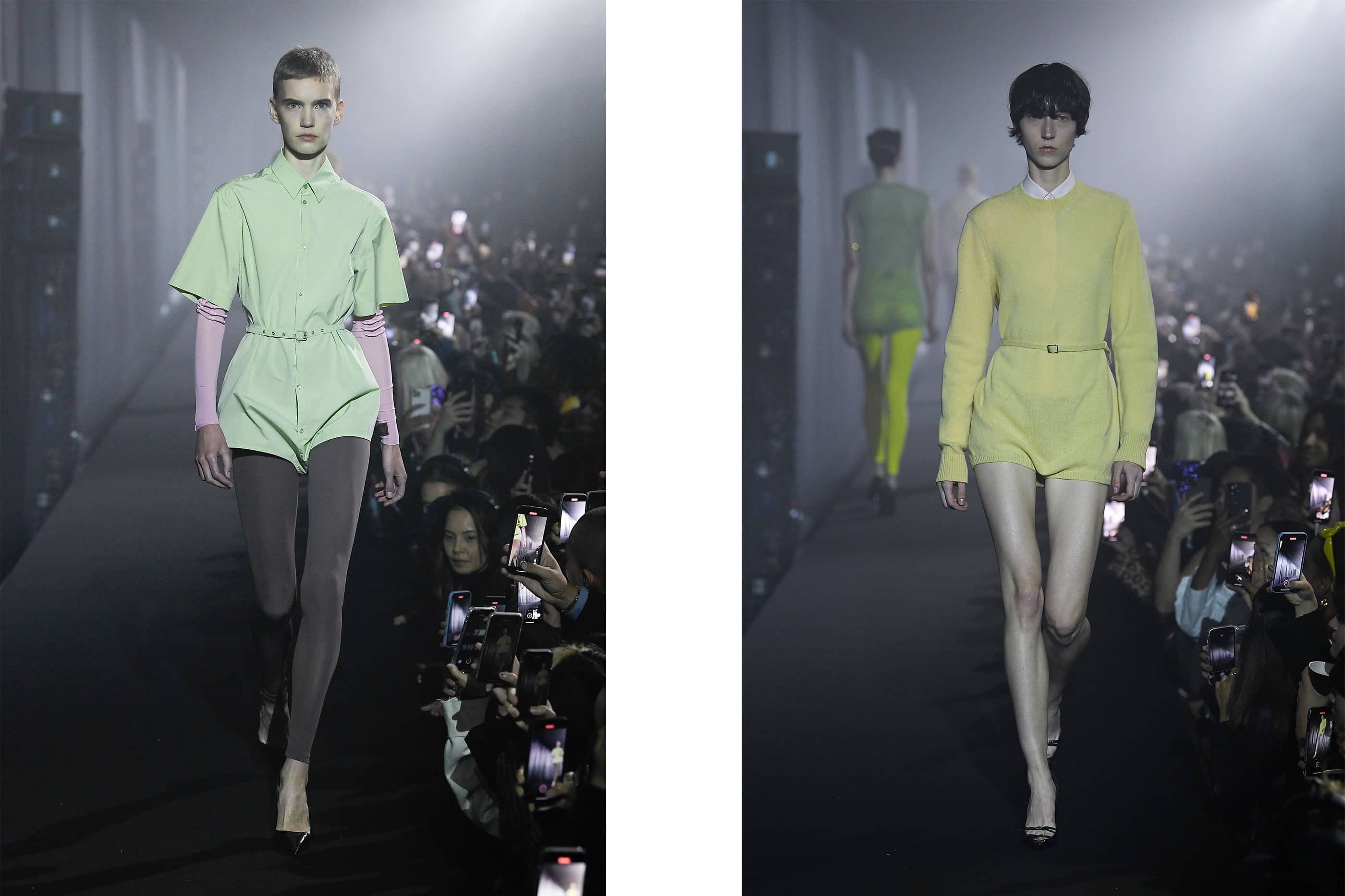 It was a dystopian collection for dystopian times, but not in the way we've seen before. Sure, there were palette and silhouette references to his early collections, namely Spring 99 menswear, but predictable references to ravers were not on the tip of the tongue.

Instead, the body, sensuality, and fluid movement was front of mind. Naturally, it was all in a very Raf way. There were poplin rompers worn with slinky ballet tights. Cashmere and jersey playsuits (like tiny versions of the ones he designed with Miuccia Prada) were layered over shrunken starchy button downs and tights in grey, ballet-pink, neon green, red, and sage. Sleeveless tailored vests offered up early aughts nostalgia, while knitted ones were seemingly turned inside-out with exposed tags, giving way to a different feeling of intimacy. 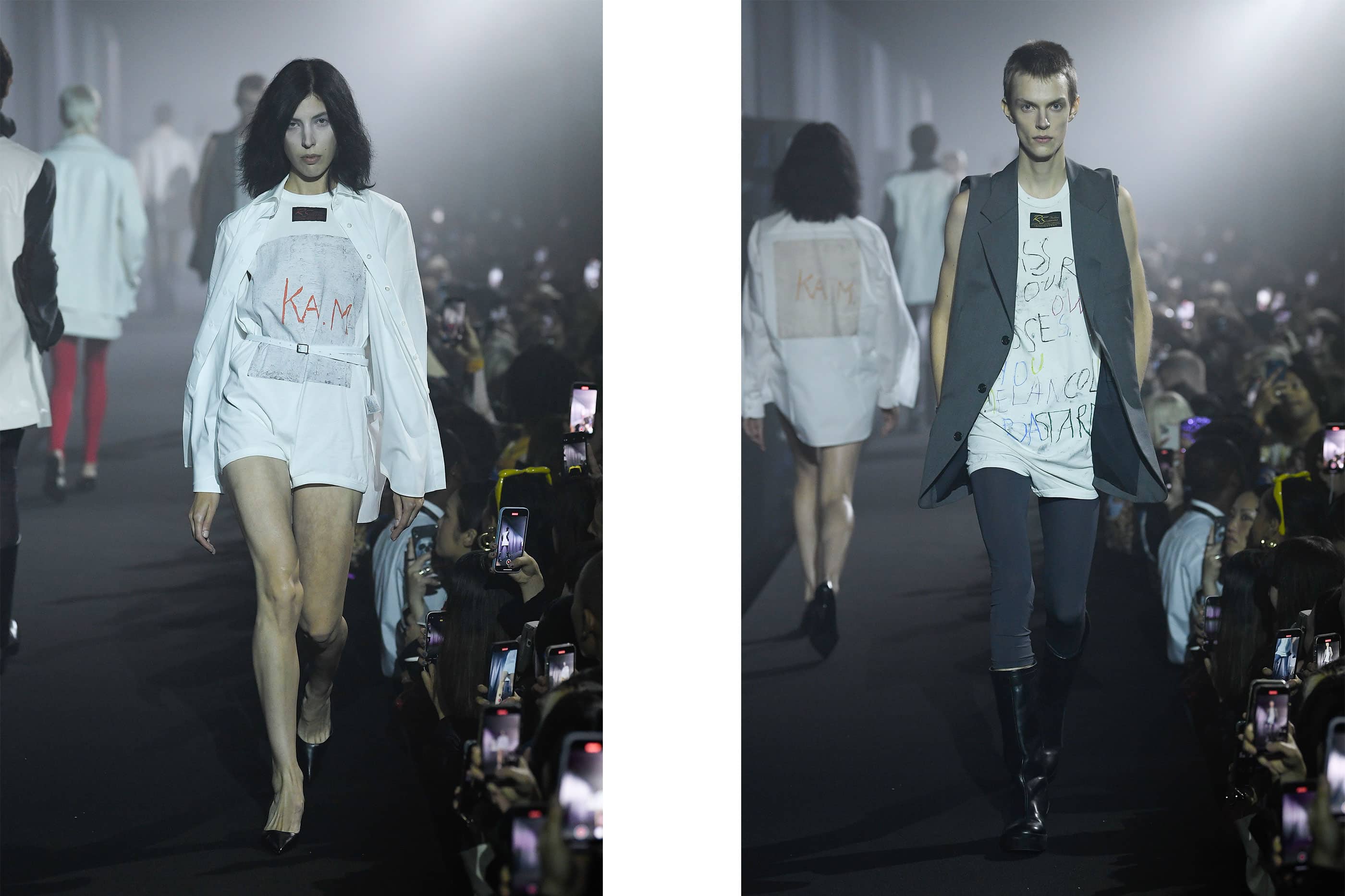 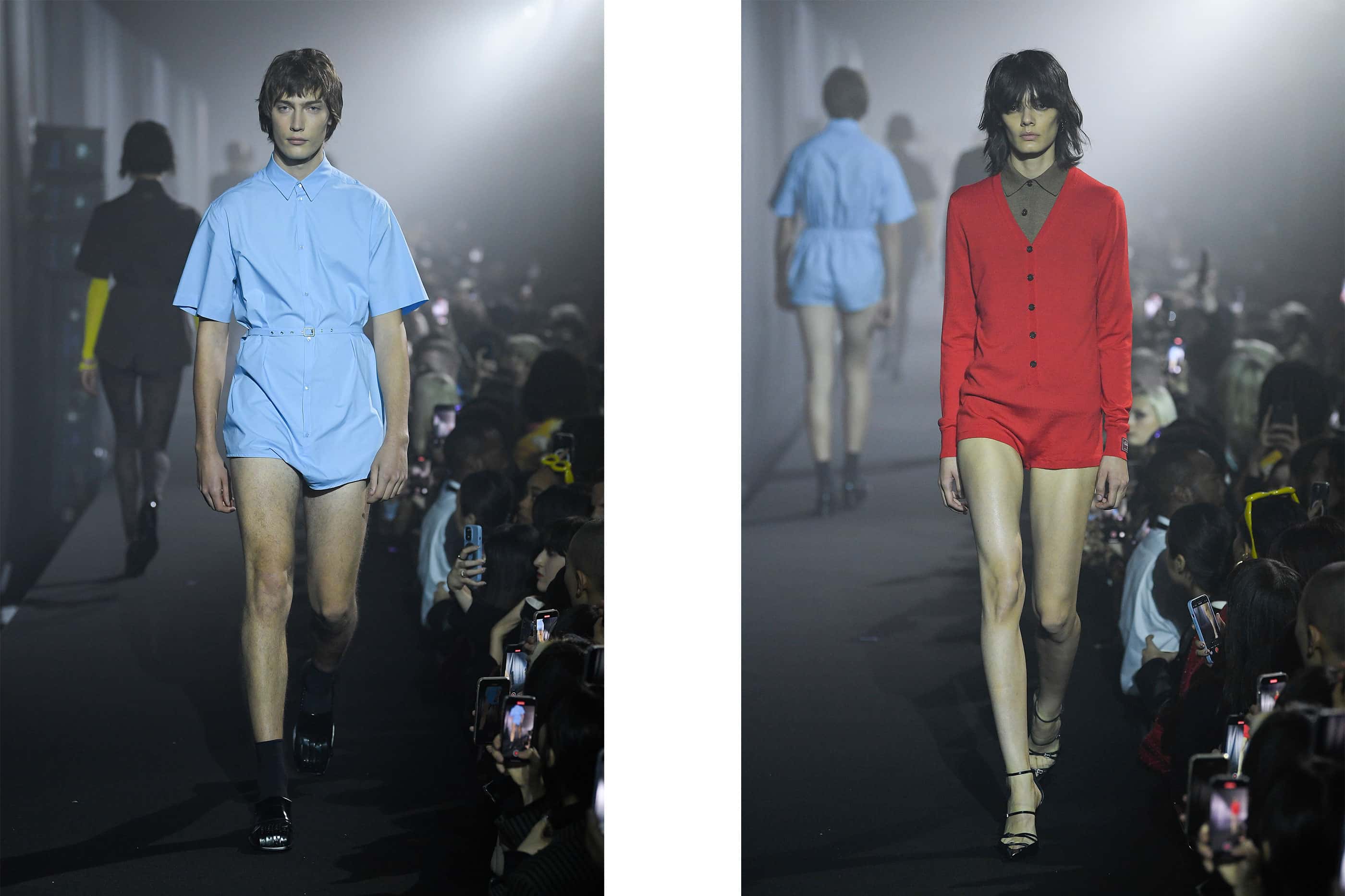 The jersey, which this season was offered in the aforementioned rompers as well and t-shirts and long-line singlets, was scrawled with child-like letters, spelling things like "Let's drink the sea and dance" and "Kill all of them and dance".

The directness and simplicity of the thought-out collection was spliced with a feeling of democracy, inviting over 300 guests to a show without seating, meaning anyone was able to witness the show from anywhere, provided you could make it through the crowd whose phones were held high in the sky the whole time, visually adding to the dystopian feeling. 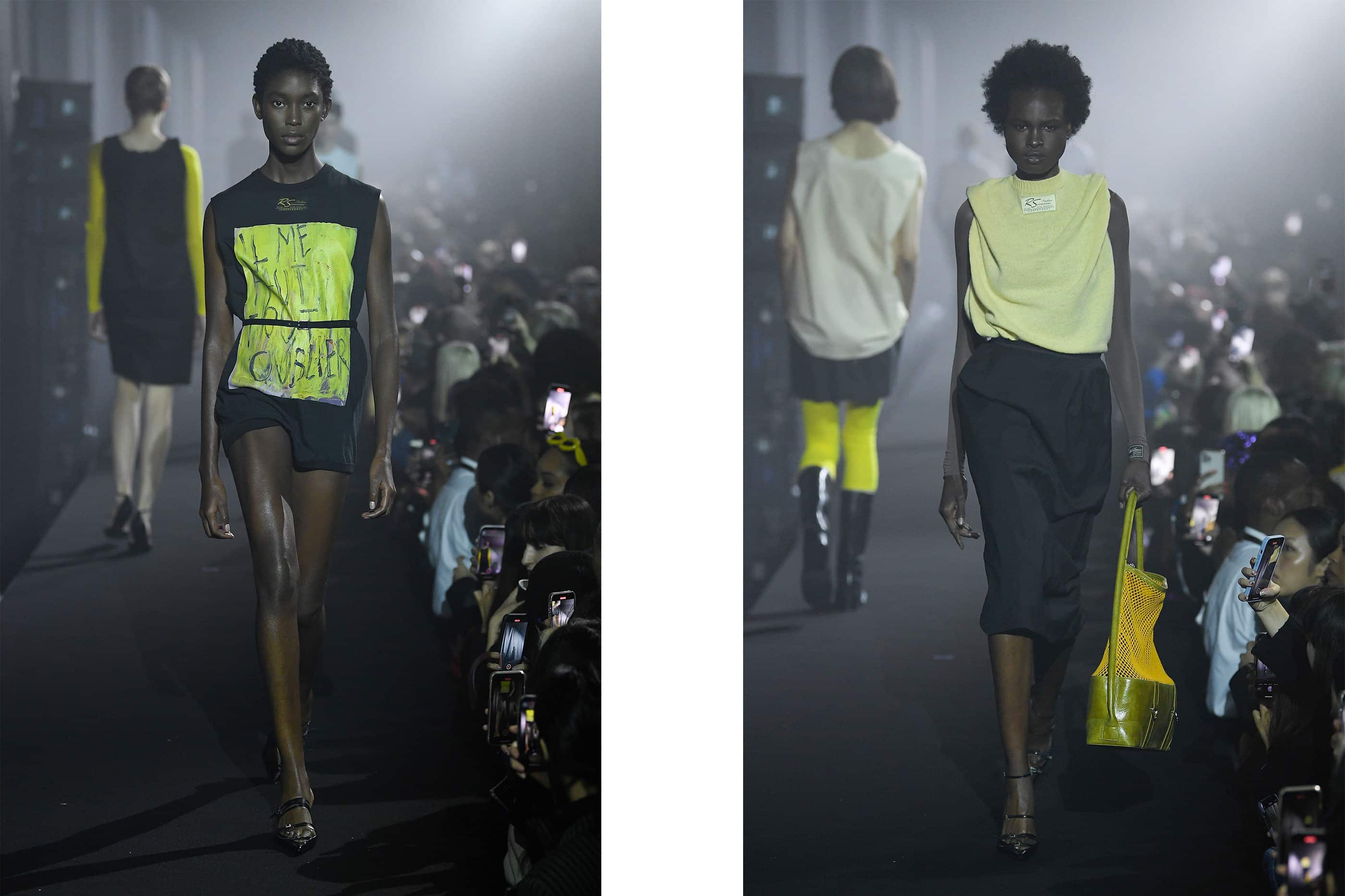 The difference in the way the collection was presented as opposed to, say, a handful of designers this season who got very tricky with their sets and theatrics, was that atop that sprawling bar, were models clad in a complete collection of pieces that will be worn despite the hype that endlessly follows the Belgian designer. These were pieces that stood up to themselves alone, even in the throes of the techno, the dim lights and the jostling crowd. If this is what Simons is like in London, let it continue. 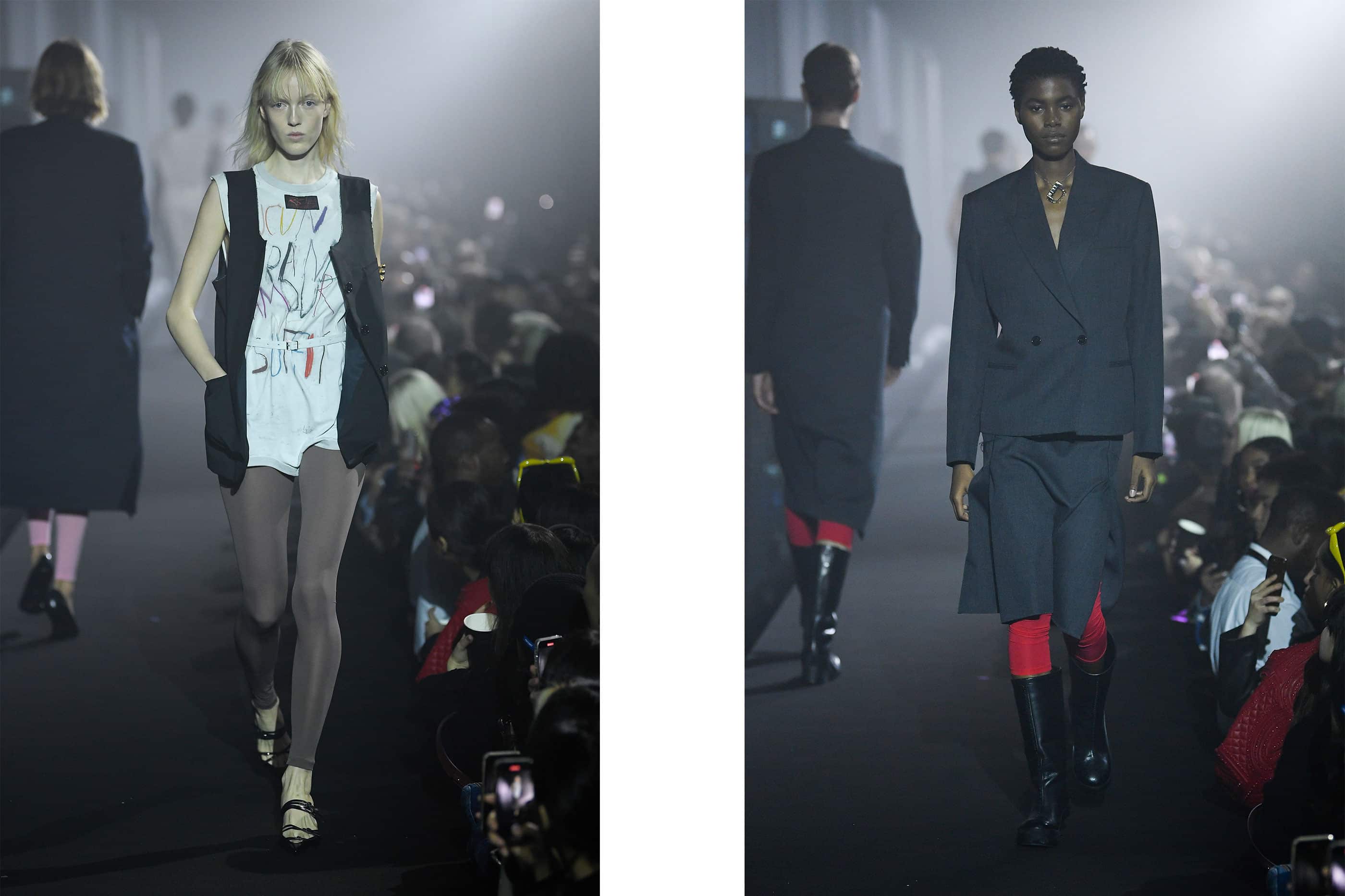 Watch the full show, below.