"It’s important to me that people know that PRICIE is always going to deliver, first and foremost. But I also want them to be excited to explore different avenues with me. I never want anything I create to sound too similar to something I have done before.” Nigerian-born, Australian-based singer, songwriter and rapper, PRICIE, may have only dropped her debut track this year, but her electric, vibrant sound hasn’t left our ears since.

If you have had the pleasure of submerging yourself into her world, you would already be familiar with the undeniable ease and confidence that permeates through her body-grooving music and the unapologetic energy that accompanies it. It’s the type of creative and personal self-assurance that can’t and shouldn’t be dismissed. One, that enables her to haphazardly sport one of those iconic, vintage ‘mystic wolf’ t-shirts you find at the markets and actually look good in it.

This 25-year-old triple threat knows what she wants – a characteristic she attributes to a childhood reinforced with a rhetoric that nothing is ever off-limits. While she admits to the cliché, it’s this very teaching that inspired her first release, too dang good and cemented her vision as an artist. A desire that has led her to create and write with purpose first, and genre second.

Off the back of a freshly released track with fellow Australian rapper, Genesis, titled Friendzone and with more soul-reaching, hip-swirling experimental greatness to come, PRICIE assures us of one thing – what’s to come is pretty dang good. 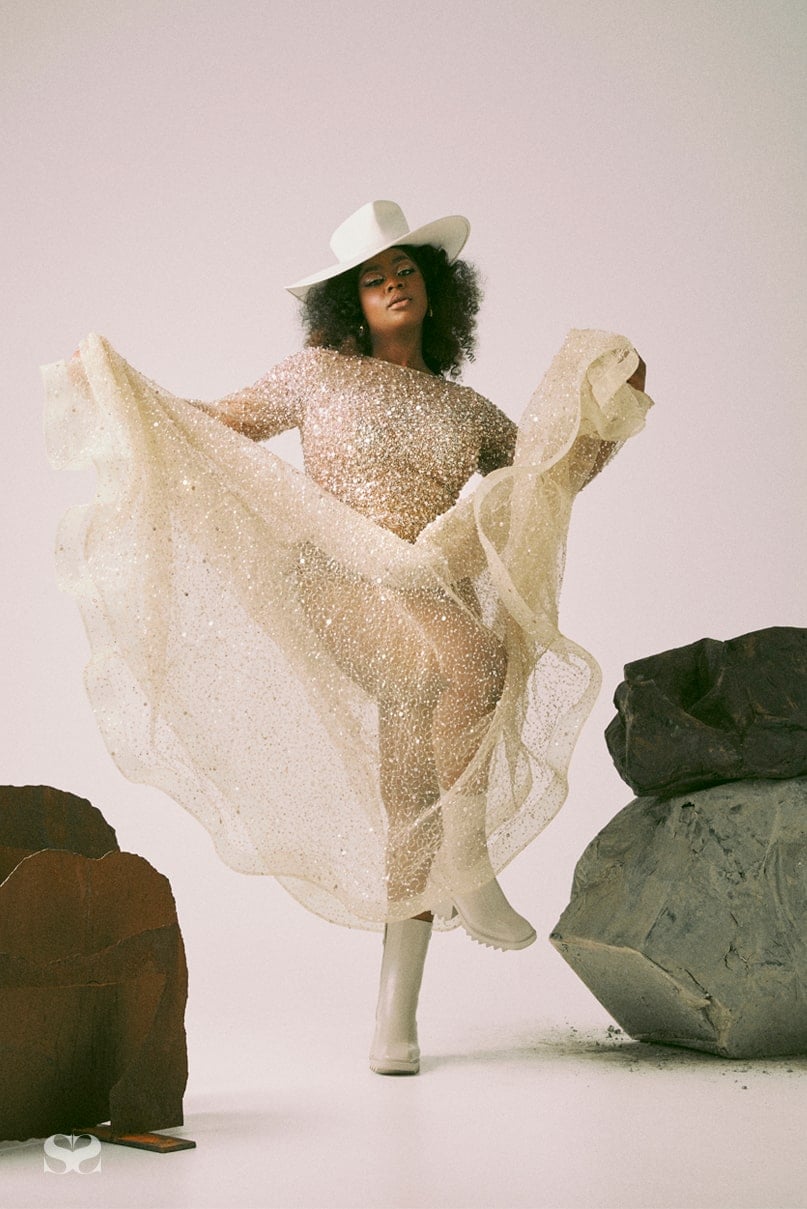 As a child, I definitely lived a very idealistic life. I always had my head in the clouds, was always playing and really enjoyed my childhood. I grew up in Nigeria, specifically Benin City, while my parents were living in Australia. So, for some time, I was separated from my parental identity. But I was never led to feel like I couldn’t be free or exploratory because my older sister, Pamela, who became a parent figure to me, always walked first. She squashed any worry or concerns that I had and I believe that really shaped the carefree personality I am today. I am still very emotionally innocent.

How have you channelled that carefree attitude into your art form?

I think being too carefree has almost been a hinderance at times when it came to projecting my confidence, because you can’t completely let go to a certain extent and then not hold yourself accountable for a lot of things. I definitely had to realise this when I started making music, because I had to acknowledge that a lot of people won’t like or identify with the type of power that I wanted to present through my art. Recently, I am learning to be more graciously confident, which is this place in-between where I am observing my surrounds and adapting my energy to that. It’s still authentic, it’s just a more cautious authenticity.

When you walk into a room, what’s the first thing you hope people notice about you?

When I walk into a room, the first thing I want people to notice is my presence; my being. Depending on what I carry into that room on that particular day, I want people to be drawn to that energy – that calm. I can only liken it to that feeling of when you’re looking for your favourite person or thing and when you finally see it or them, there’s a sense of relief that sinks in. I hope I can bring this sense of ease to other people, because you just never know what they are dealing with. To be someone’s calm in a crowded room or a time of chaos is important to me. 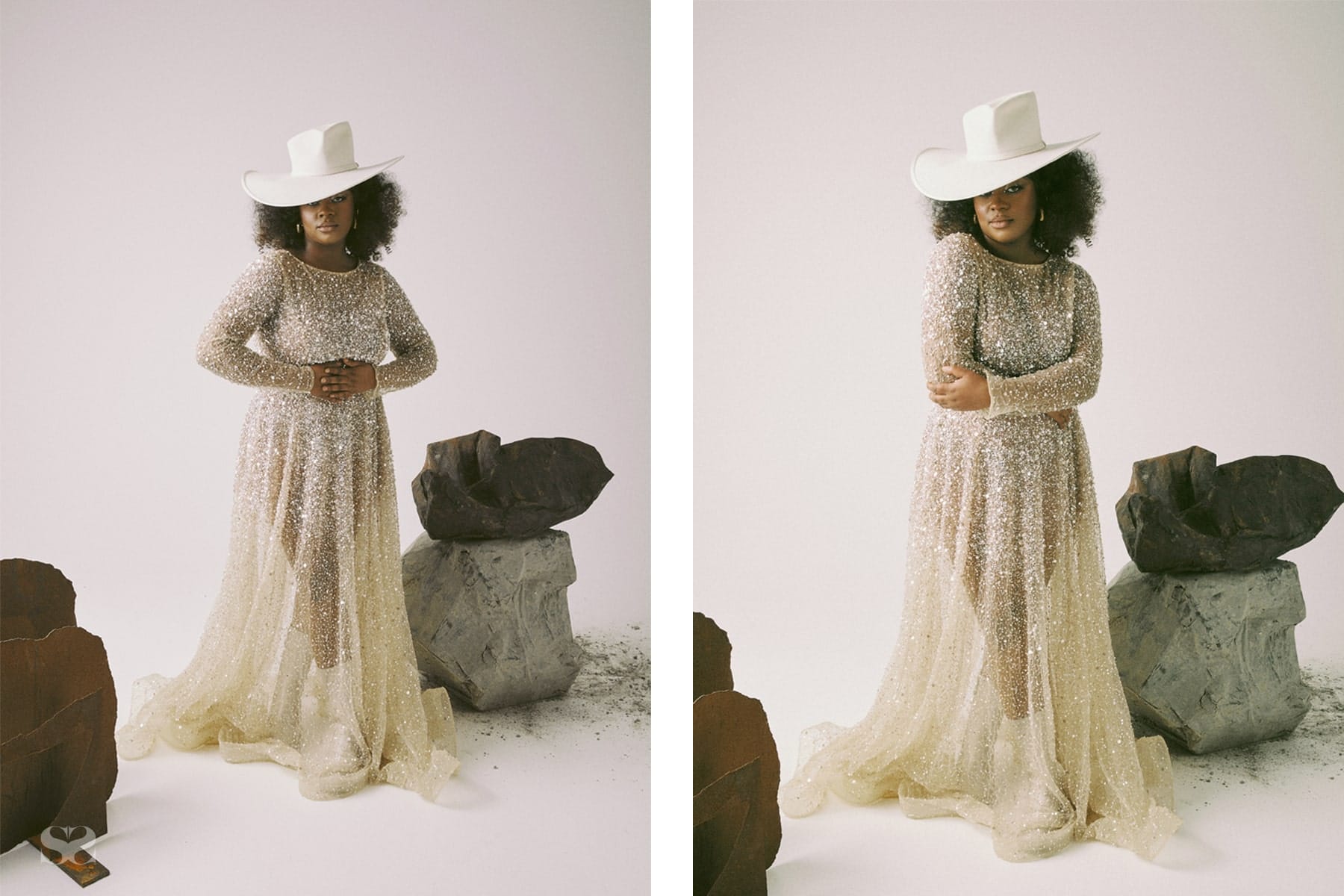 "I look to artists like Luther Vandross and Madonna who have wonderful stories and have lived very meaningful lives that are so different from other people. For me, it’s not just amazing people but also events in life that solidify who you are as a person."

You can do it all – singer, songwriter, rapper. Was this something that always came naturally to you?

I have always grown up with the confidence of knowing that I could do things. It never had to be well, it was just the encouragement that if I tried, I eventually could. This is definitely something that stemmed from my father, who is one of the most self-assured people I know. And it’s not just a spoken confidence, but a mental and constantly engaged approach to life. My siblings and I were raised to understand that the power to excel was in us and not dependant on other people. In my career, singing, writing, producing and rapping were things that go hand in hand. So, doing one meant I had to do the other. It was a natural evolution in this sense, but becoming better at each discipline has always been something I have had to work really hard at.

Who have been some of your strongest influences both personally and creatively?

Still to this day, Lynn Robinson, who was the counsellor at my high school, has had one of the most lasting influences on me. I remember going to her offices all the time and now I study psychology – almost at the point of graduating and wanting to help people the same way she did. Then on the other hand, I look to artists like Luther Vandross and Madonna who have wonderful stories and have lived very meaningful lives that are so different from other people. For me, it’s not just amazing people but also events in life that solidify who you are as a person.

Were you expecting such an instant and positive response from your debut track, too dang good?

It was such a shock and also borderline creepy. I write my songs in my studio or in bed and always as comfortable as I can possibly be – pyjamas or underwear is normally the brief. So, when you’re writing from such a personal, relaxed and intimate place, you never even expect other people to like what you produce. But I did have a hunch with this song. I never expected the response and the love to be so instant, but there was something secretly inside of me telling me to back myself. 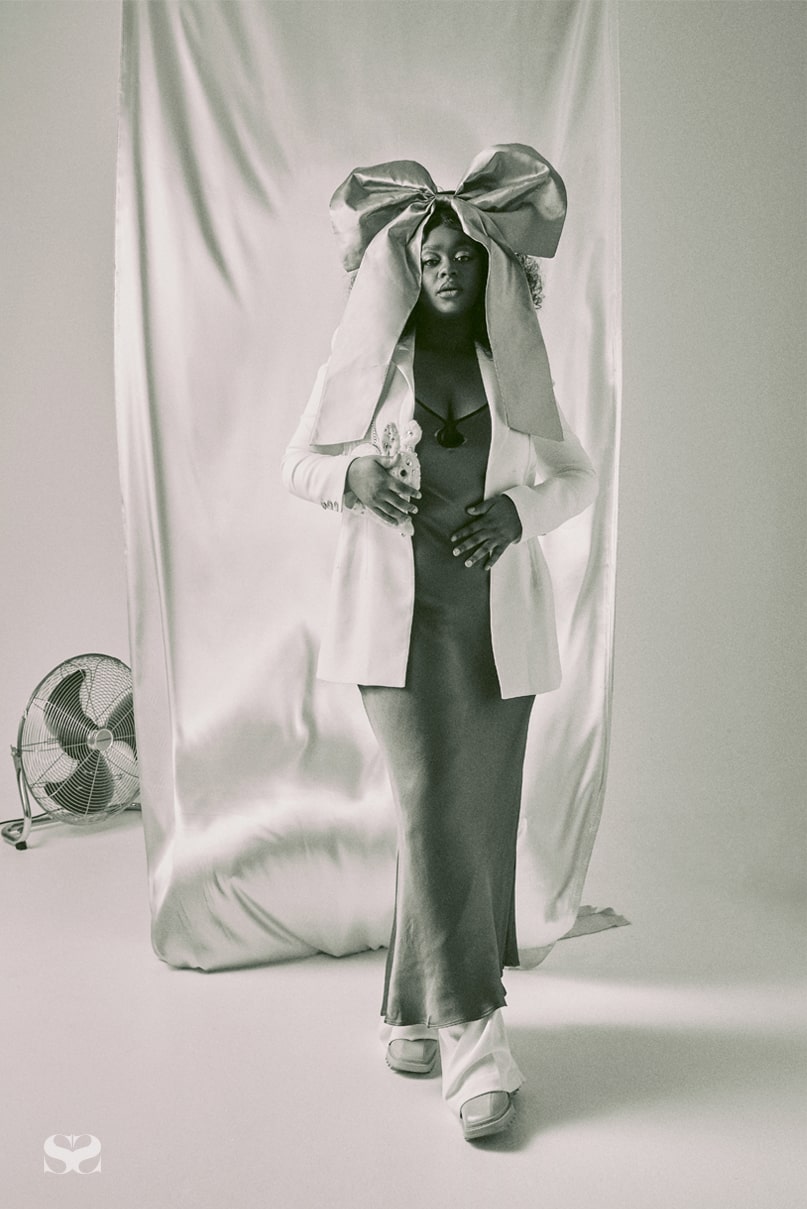 What is one song or artist that will always get you up and dancing and why?

There’s a gospel song by Anthony Brown & group therAPy called Blessings on Blessings and it has such a cadence that my boyfriend will often play it for me in the morning when I’m grumpy, because he knows it helps me get out of my mood. Otherwise, Luther Vandross Never Too Much always invigorates me.

It feels like the music you create is less about confining people to a ‘genre’ and more about the message.

Messaging is definitely an important aspect of the music I create and I’m learning more and more that it doesn’t always have to be lyrical. It can be instrumentally imprinted and it’s often when a melody is so powerful that it moves your heart or heals you in some type of way, that you’ve created serious magic. I don’t want to be ‘genrealised’. Even though it is important to be identifiable to some extent, I think it’s beautiful for someone to come along who is an avid rock listener for example, but who can still appreciate and enjoy my songs. It’s important in my creative process to transcend people’s expectations or understanding of my music.

If someone was to open your phone, what is the first song they would see?

If I was to take a wild guess, it would be a gospel song… And yep, I just unlocked my phone and the first song that came up was Never Lost by CeCe Winans.

What do you hope people feel when they listen to your latest track Friendzone?

What I would like people to feel from the song is an instant transportation back to the Donna Summer’s era. I hope they understand and also appreciate the pizzazz and the glitz and glam of jazz and blues and the instruments we highlighted and honed in on.

“I wish there was a way where with each song release, I could almost press pause on that personality or iteration of my style, because each moment is representative of a different story.” 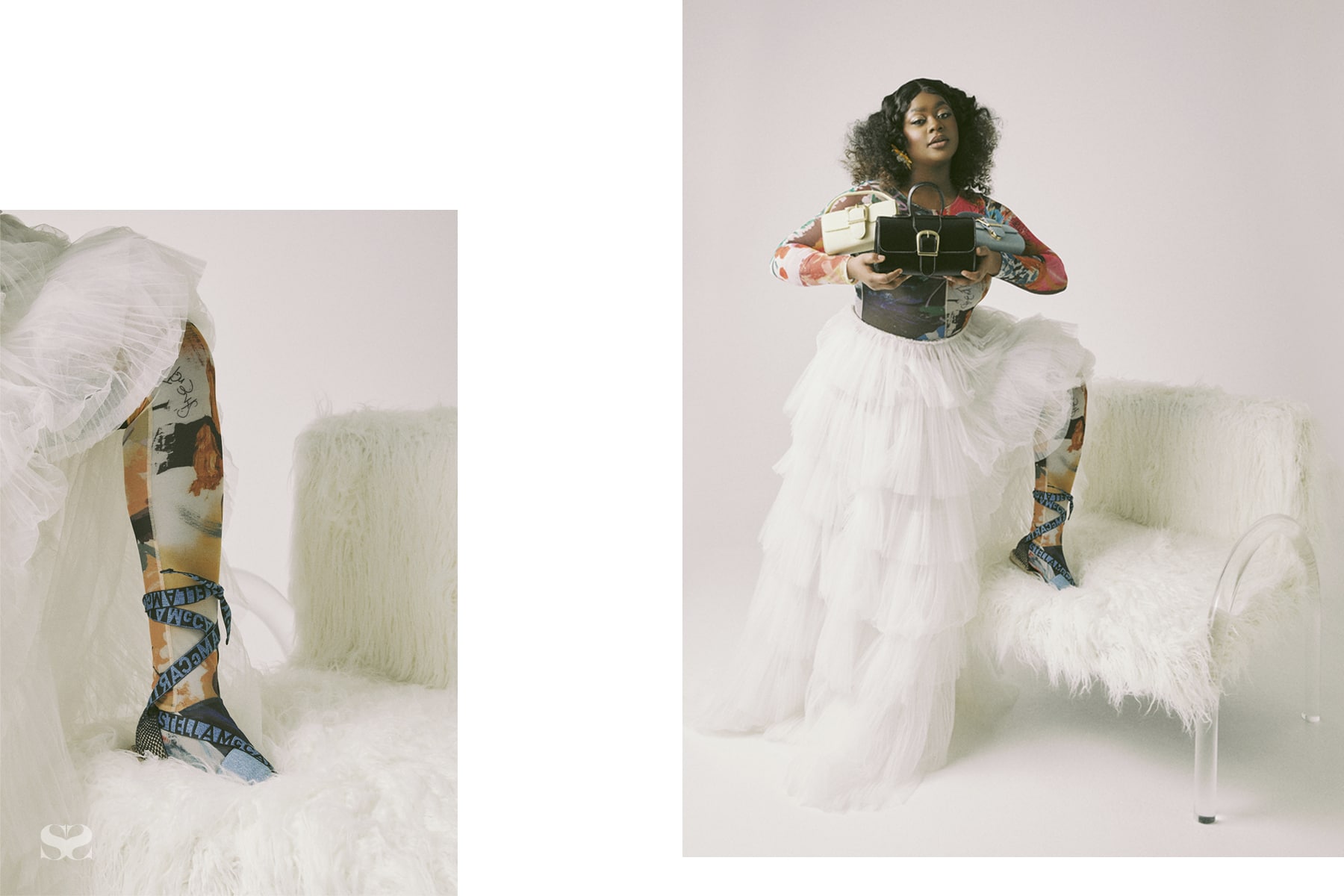 Where do you hope this places you creatively?

I wish there was a way where with each song release, I could almost press pause on that personality or iteration of my style, because each moment is representative of a different story. But in general, I hope people are able to see the growth in creativity, colour and beauty and even the editing, artistry and professionalism that went into creating Friendzone and the music video.

I do have new music coming out and I’m working again with the same producer from too dang good, so you know the energy will be there. There’s also a lot of great collaborations and visual creative works to come. I’m also hoping to deliver a stronger identity and motif through my music and work, while still keeping things fun and relatable.

If you had to pick your final meal on earth, what would it be?

Undisputedly my mum’s pasta with mushroom sauce and fried chicken. It’s essentially like an alfredo, but my mum always makes it from scratch. I remember when I would come home from a bad day at school and she would somehow know because the dish would be sitting there waiting for me. 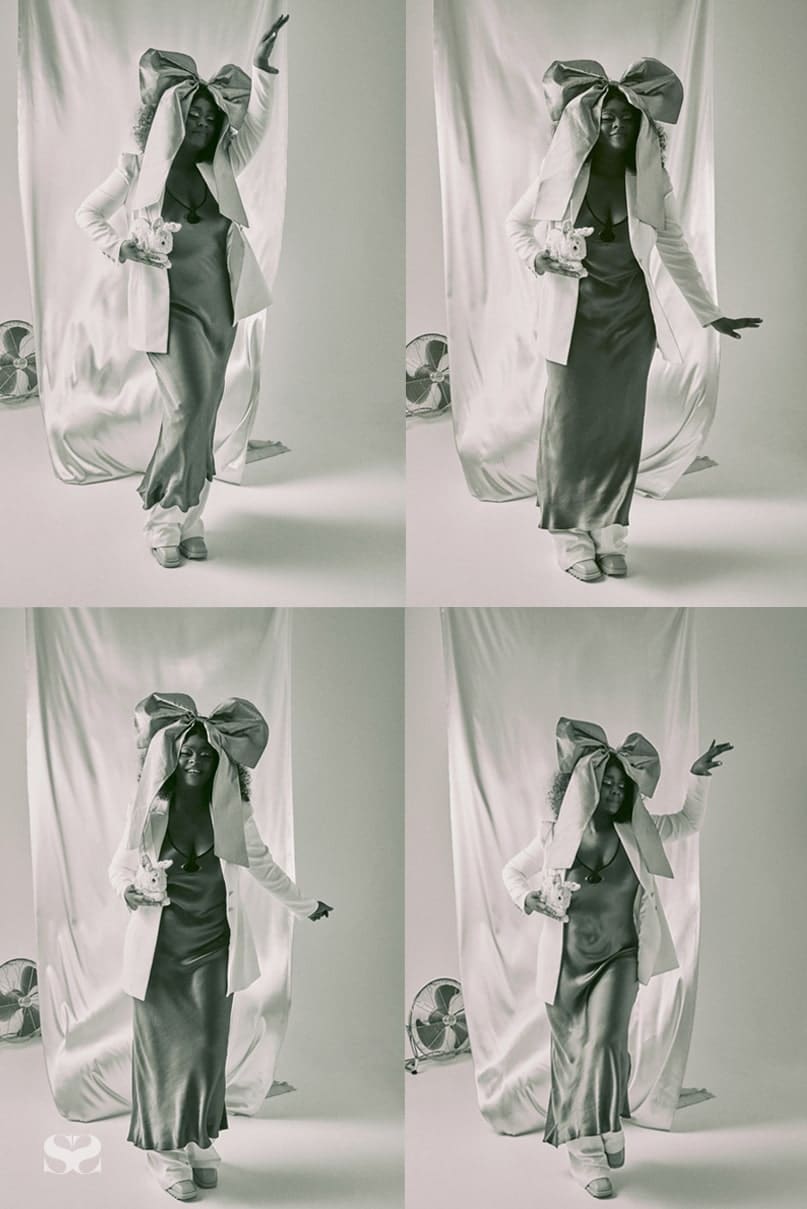 For more on our Majestivc issue, get to know our cover star – model and Chanel muse Blésnya Minher – through RUSSH's exclusive model profile feature.