Each week on The White Lotus day I am so excited to find out what is going to transpire next in Mike White's unhinged universe, and each week I am reminded that the most unhinged thing of all, is Portia's style.

We all collectively felt it when she stepped off the boat in her House of Sunny sweater vest in the sweltering Sicilian sun and spent the entirety of the first episode feeling woefully sorry for herself that her boss didn't want to hang out with her on their all-expenses paid luxury vacation in Italy. It was only a matter of time before the next few episodes confirmed what so many of us already knew to be true in our souls: In a sea of exceptionally dressed women, Hayley Lu Richardson's character, Portia, had been dealt the tragically short end of the wardrobe stick. 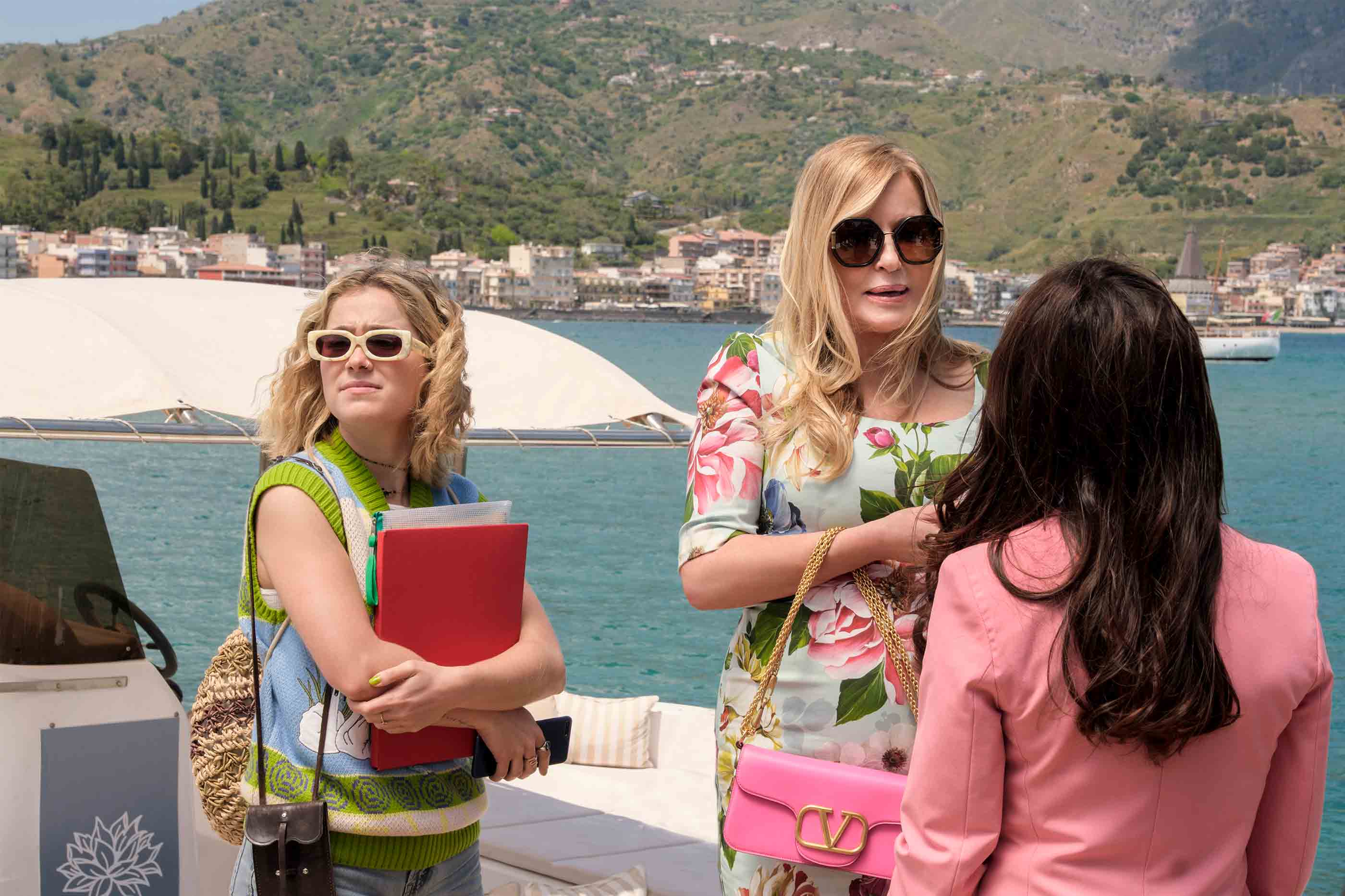 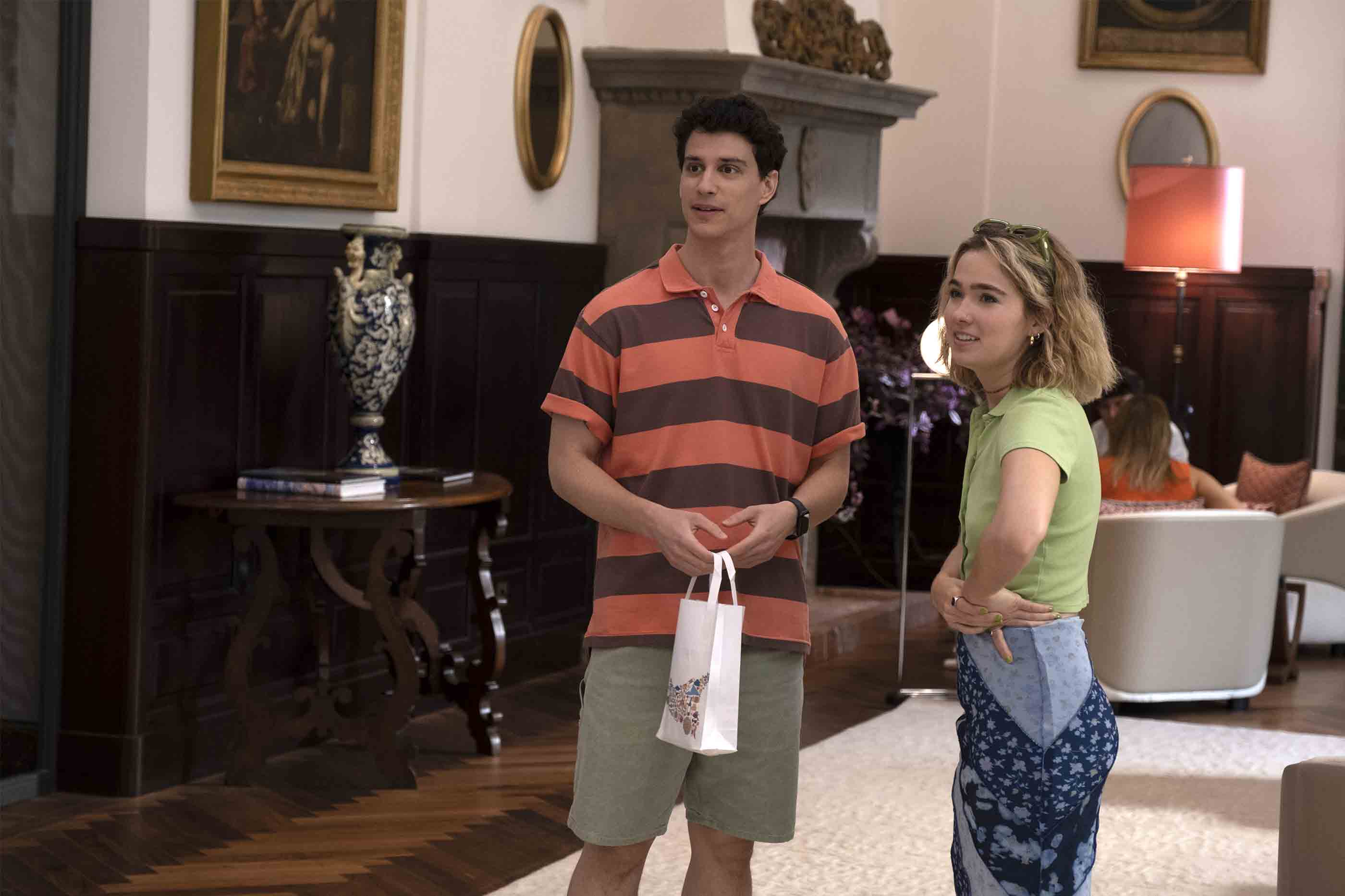 If there's one thing The White Lotus costume designer Alex Bovaird knows how to do, it's to communicate the complexities of a character through what they are wearing, and while it would initially appear that Bovaird completely dropped the ball on Portia, she's actually hit the nail on the head with revealing who Portia truly is, speaking to a collective issue that has been making the rounds of internet discourse for some time now: does Gen-Z have an original sense of style?

She's a twenty-something, chronically online girlie with a sprinkle of clinical depression who just can't seem to figure things out or find the thrill in life anymore, so she's turned to her wardrobe to try and make sense of things, attaching herself to so many micro-trends and TikTok-fuelled "aesthetics" that her style appears as though the internet has thrown up on her in every scene she is waxing poetic to anyone who will listen. It is exhausting for the viewer to watch, but it also strikes a chord with the way mainstream fashion has felt for the past couple of years. 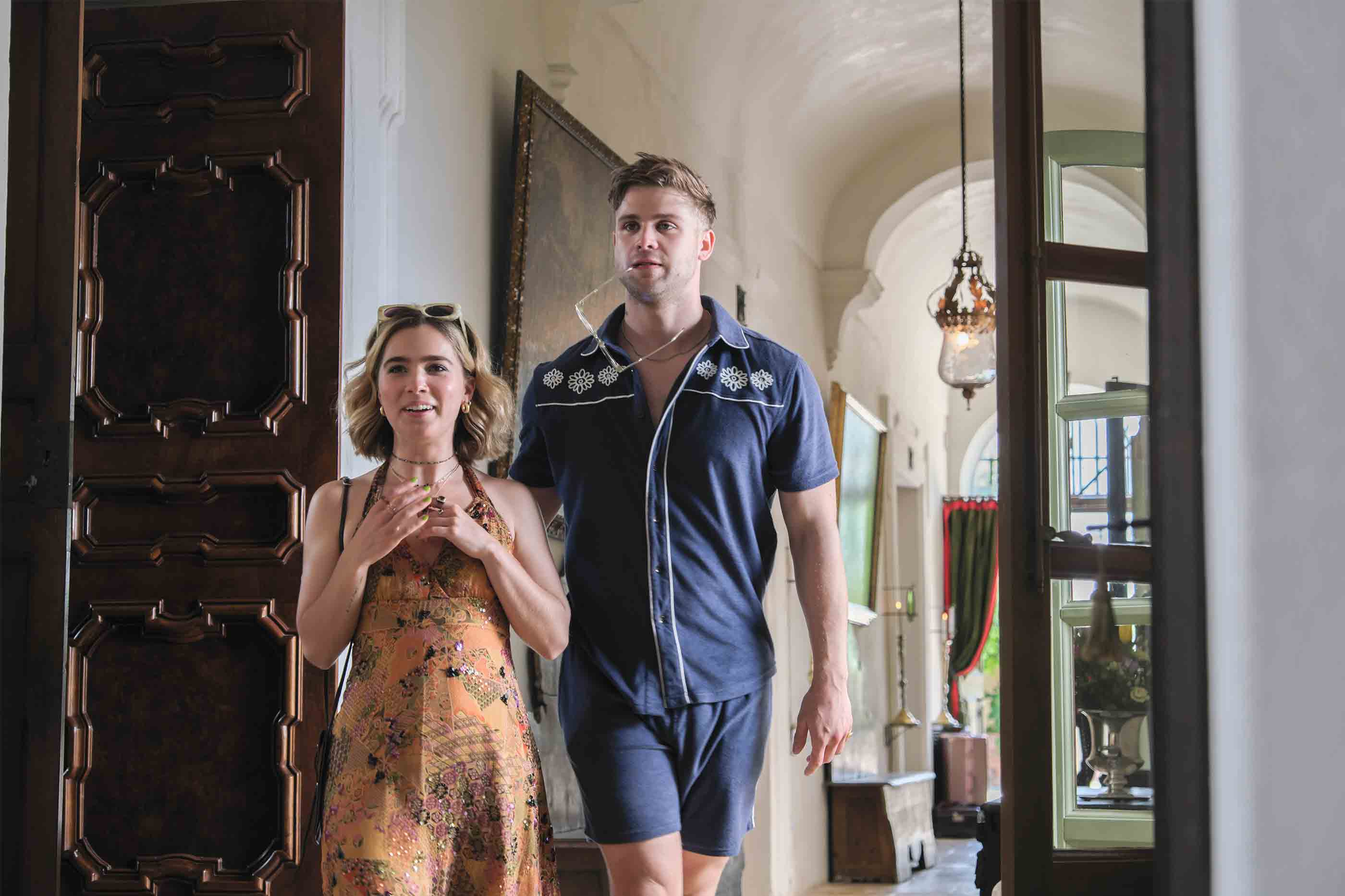 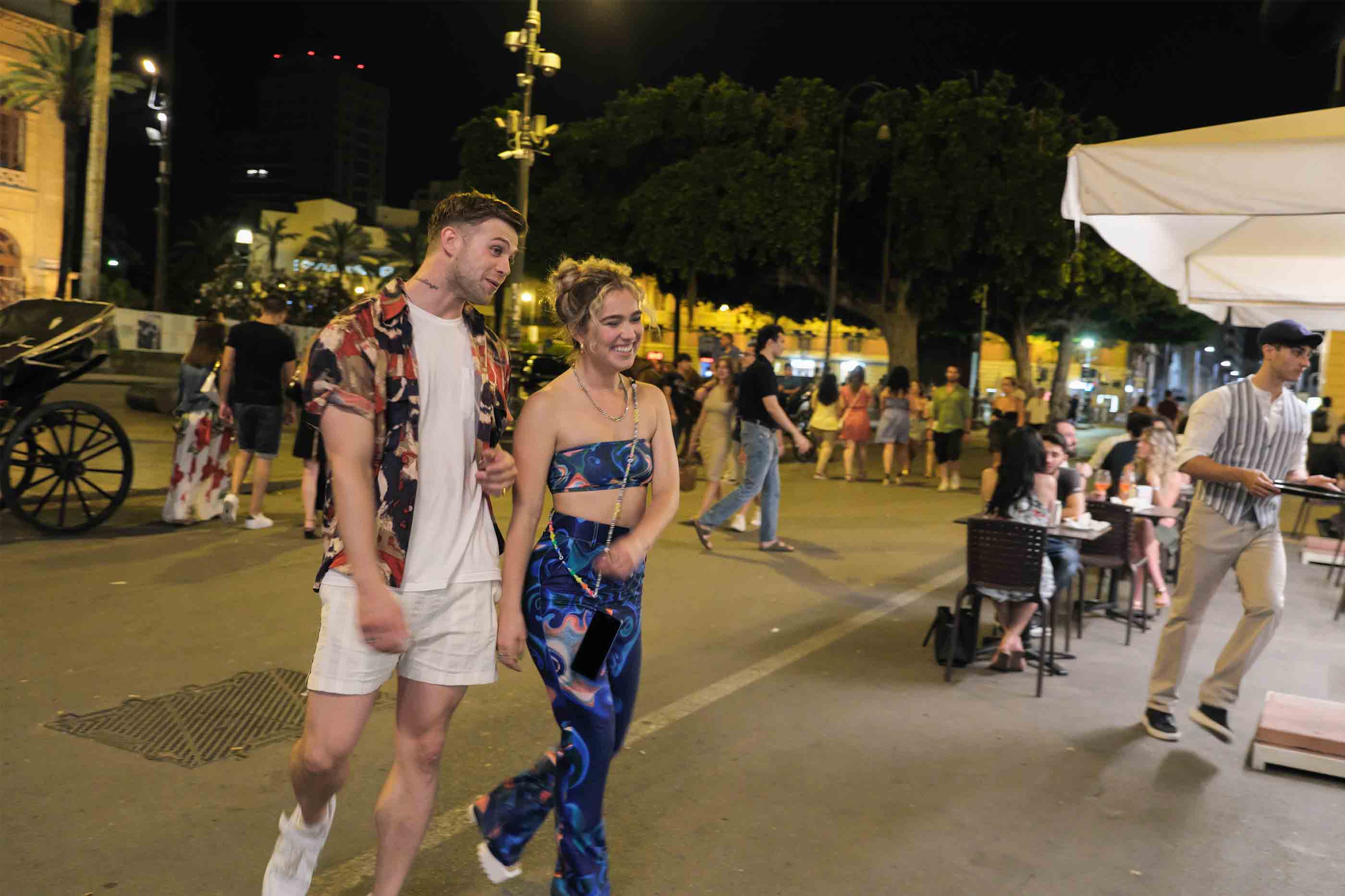 In a world when style has always been connected to the kinds of subcultures we exist within (music, art, fashion, etc.) and the ways we choose to represent said subcultures with the clothes we wear, Portia's style comes across as disingenuous for the simple fact that aside from trying to escape from the control of social media, she doesn't seem to be truly connected to anything that brings her joy or fuels a sense of passion. Which is exactly what Bovaird has been telling us through her terrible ensembles and a particular brand of "normie" core that is almost completely derived from the micro trends her character has ironically seen on the internet in an attempt to be "different".

There are oversized vintage Tommy Hilfiger shirts paired with elasticated waist pants and faux Doc Marten sandals, and then the next minute she is dining in a crochet dress and converse, followed by a zebra bikini top and a knitted bolero at the beach club, all accompanied by an eclectic mix of beaded accessories that look as though they were purchased in a bulk pack from a fast fashion label. Are we surprised when Jennifer Coolidge's character, Tanya, wasn't convinced when Portia assures her that she has "cute stuff" to take to Palermo? 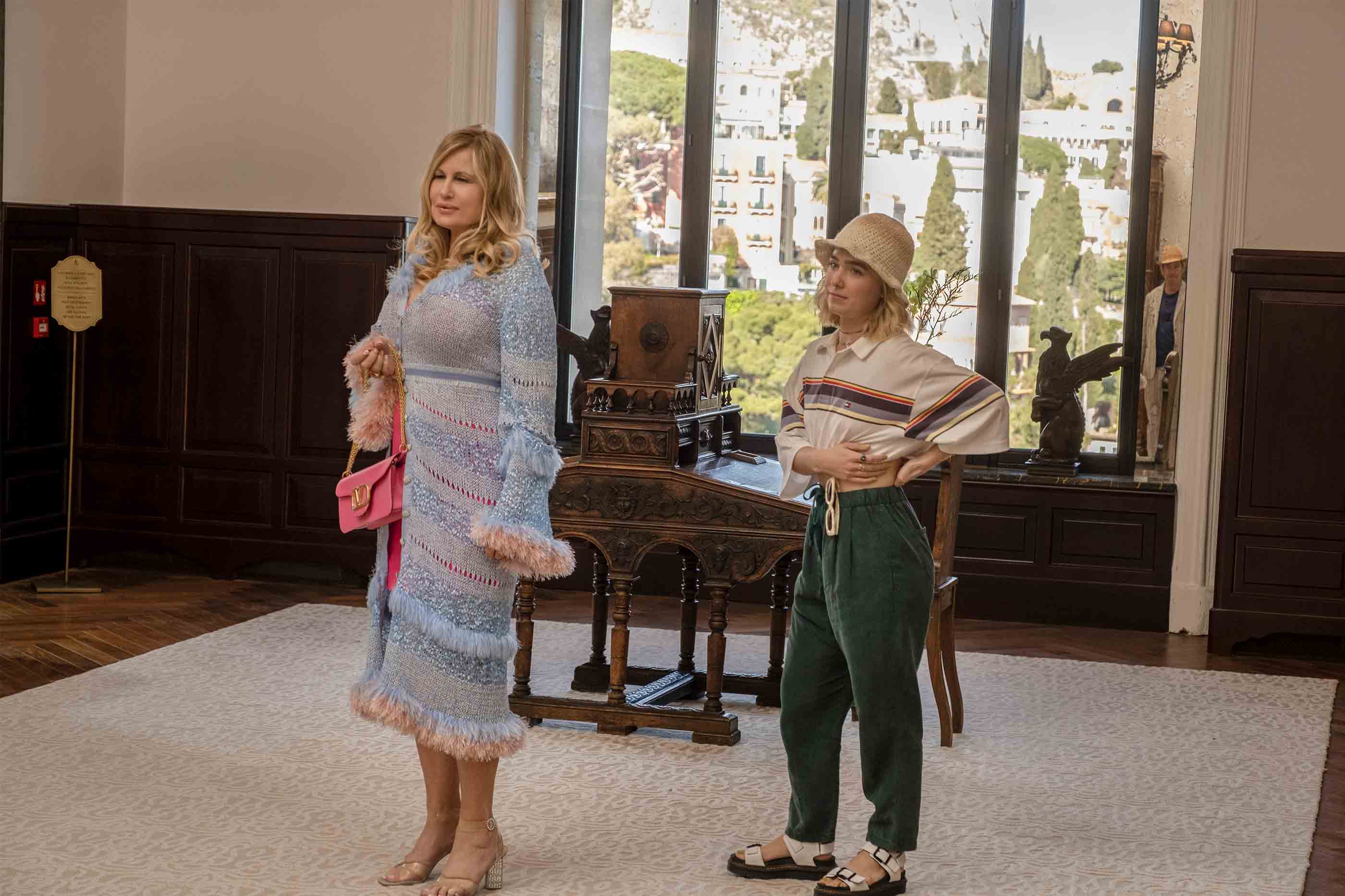 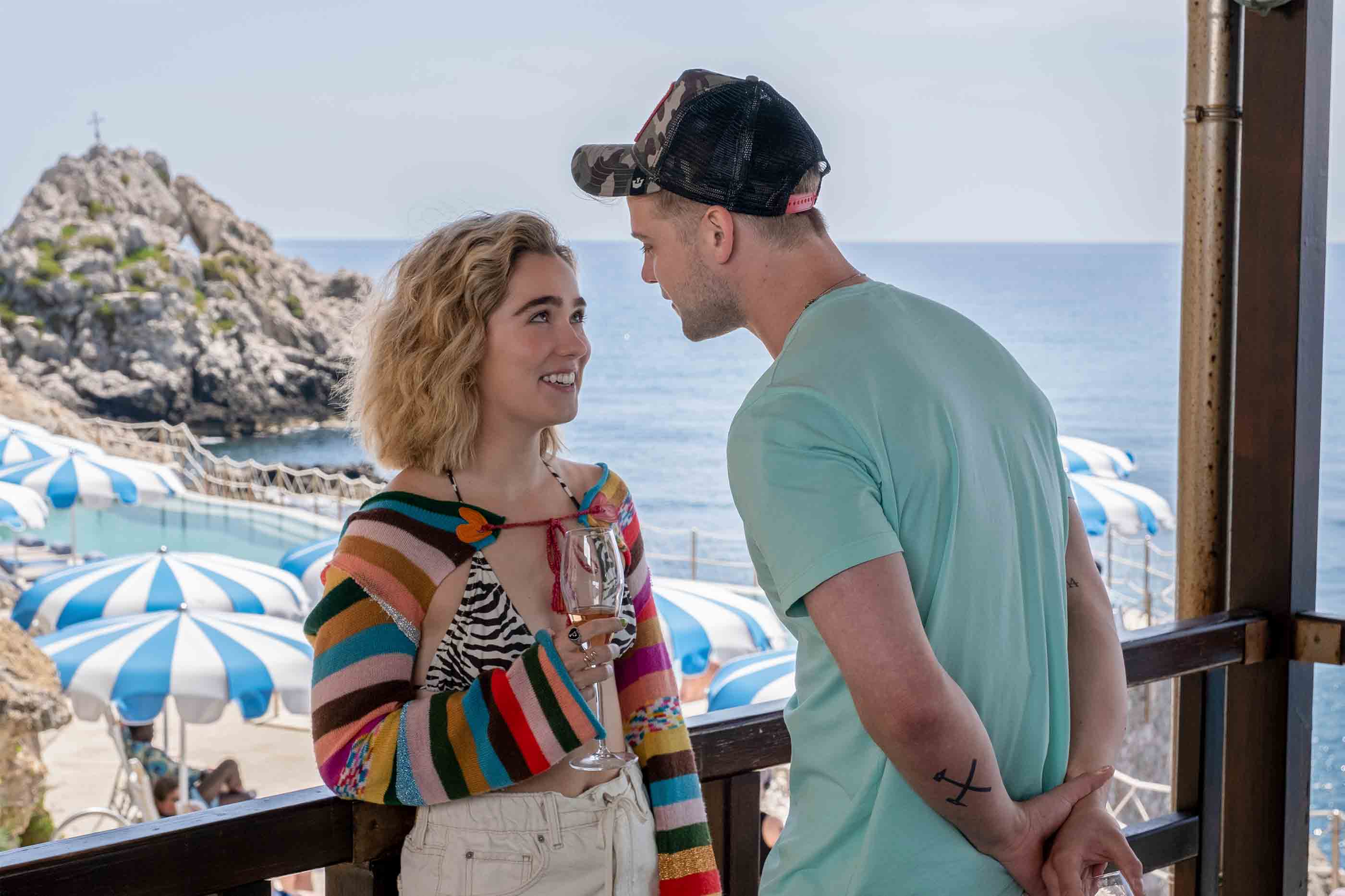 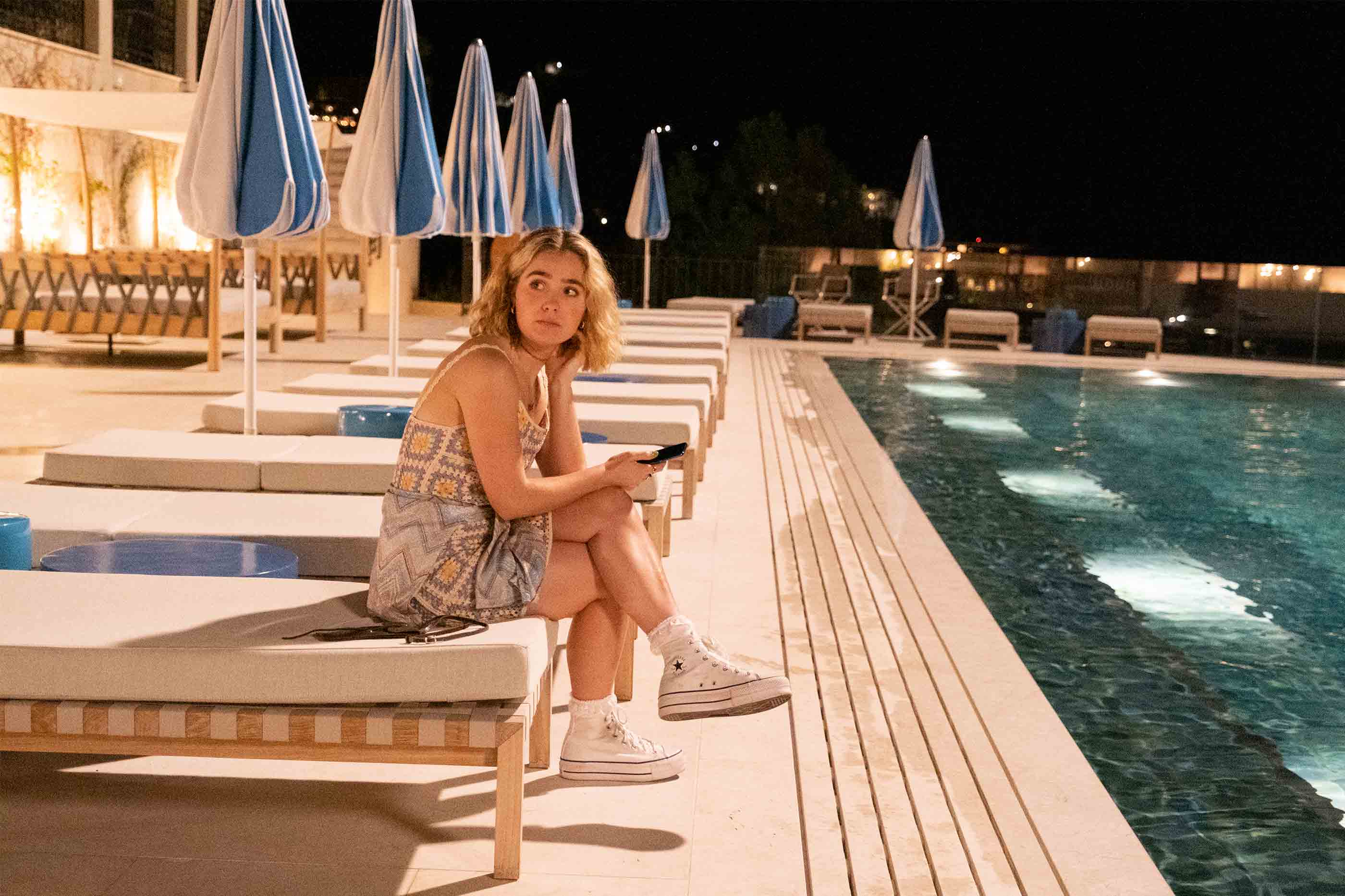 The commentary on the fashion era we are currently existing in is astute, and the further into the internet we wade, it begs the question: will we ever find our way back to authentic and individual expressions of style instead of appropriating what is fed to us through our screens? Clearly the concept of a style icon is no new suggestion, but when we take an idea like Euphoria's Maddie Perez, for example, and fail to connect her to any kind of cultural niche or phenomenon (AKA she is the phenomenon), the result is hundreds of people dressing exactly like Maddie Perez and failing to establish a sense of individuality outside of a handful of references they have to work off of from two seasons of a television show. Bovaird's representation of Portia's lack of confidence or sense of self through her wardrobe addresses this perfectly.

“Portia is consumed by TikTok and ‘the discourse," Bovaird told W on the topic. “So we thought it would make sense that she is trying hard, and that she follows the mish-mash trends. She makes bad choices and is lost, doing a random job, so whenever we got her dressed, we tried to tell this story in the clothes, too.” 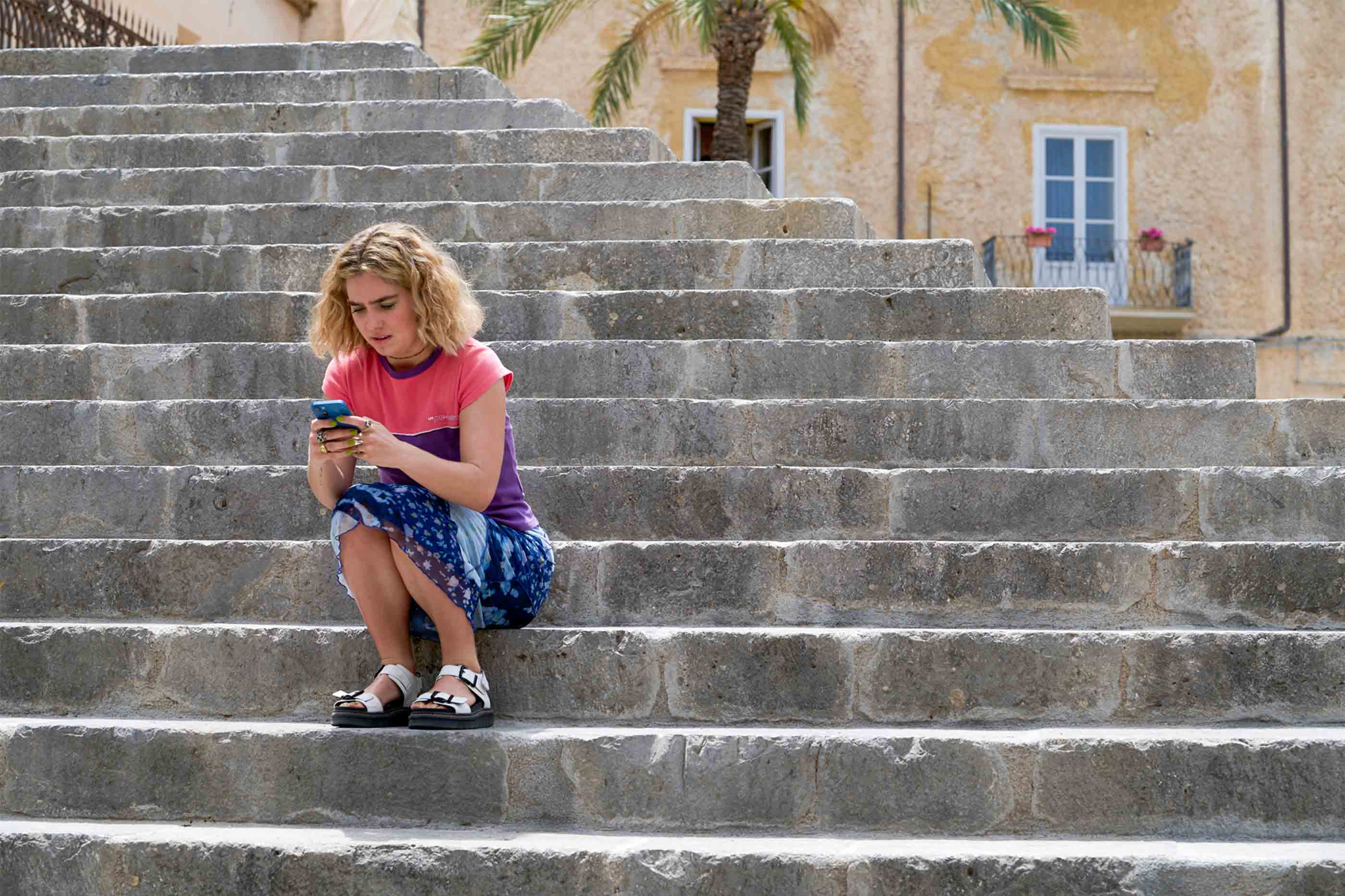 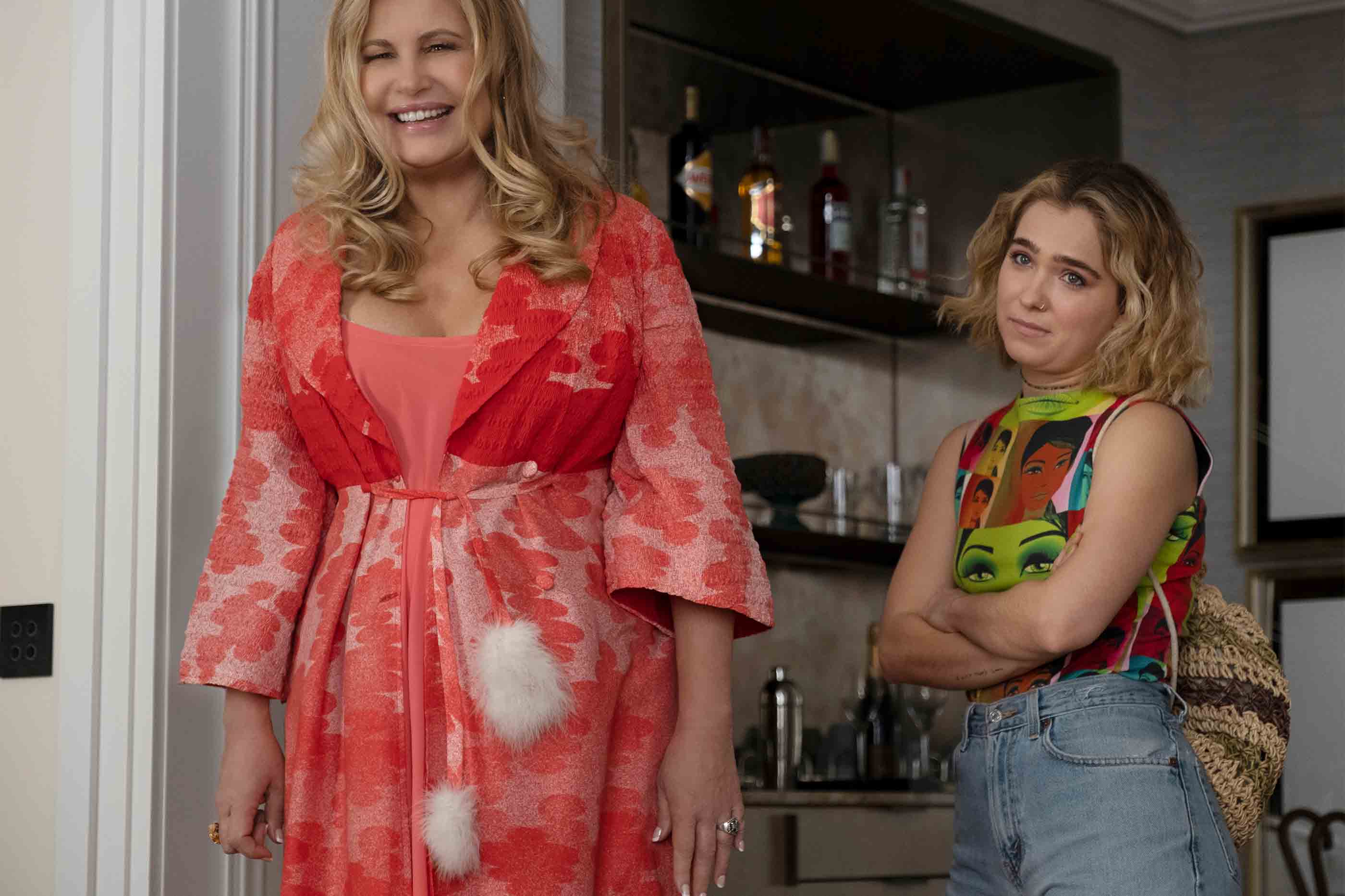 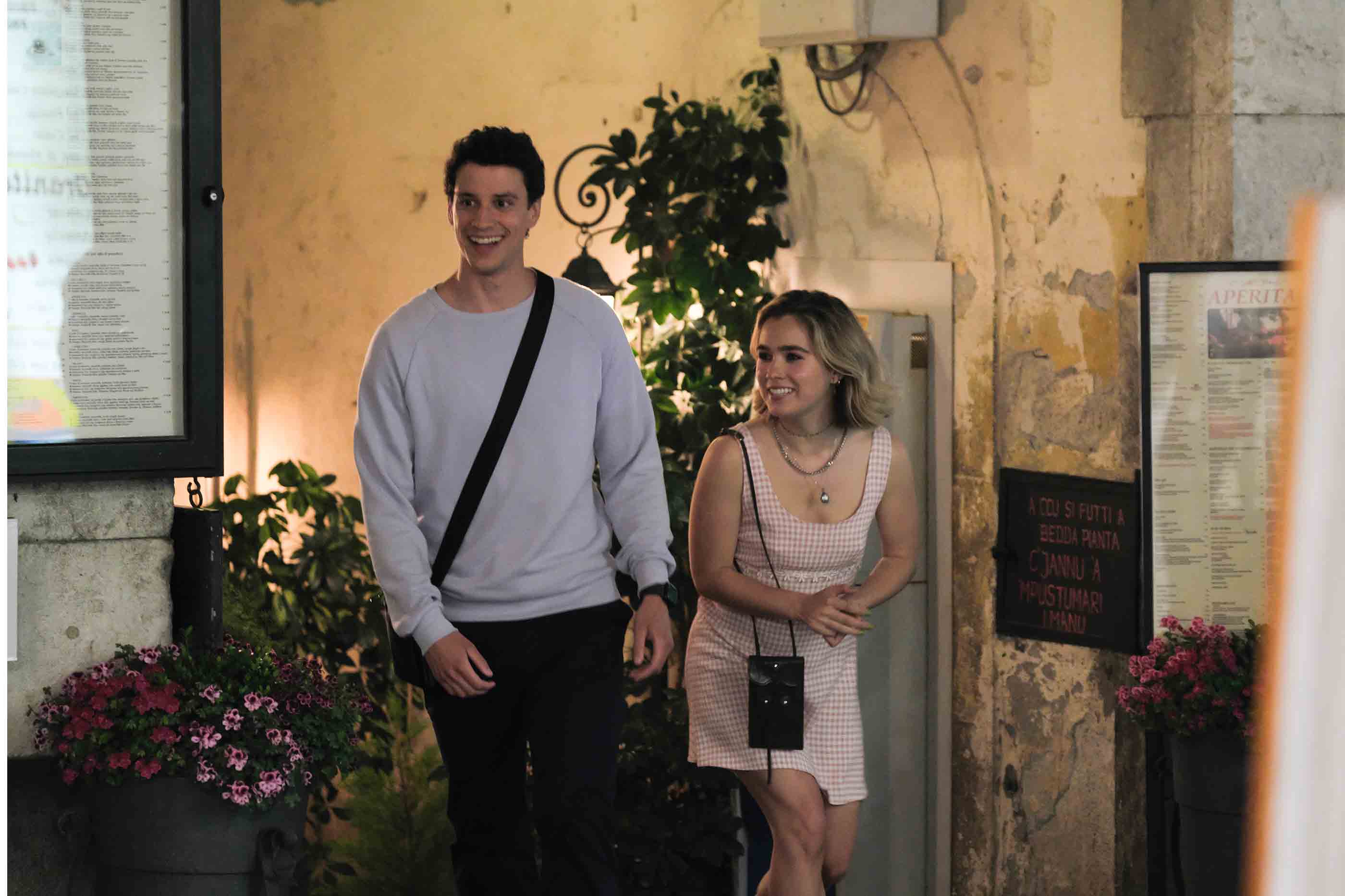 Is Portia's polarising style and character the wake up call that we've all needed to see how truly lack lustre the constant barrage of disconnected trends are? Perhaps off the back of this collective loathing of her unrelenting jorts and psychedelic prints, we can all be encouraged to tap into the clothes that truly make us happy instead of, like Portia, searching for meaning where it cannot be found.