Sydney artist Poppy Williams has a new show opening at China Heights Gallery, launching later this week. Titled Choose Your Own Adventure, the exhibition is inspired by the history and subjective nature of tarot decks.

Comprising of a collection of 78 tarot cards, each dissects the correlation between traditional imagery and the irreverence of the occult tarot employs, with Williams’ interpretation of every major and minor arcana following deep themes; from excess sorrow to gluttony. Like tarot, each card asks you to pick a card and go forth and choose your own adventure.

Williams says the exploration of tarot cards can be traced back to her proximity to them throughout her childhood and her family.

“My family has always kept a deck of cards nearby, which might explain why the tarot decks caught my attention,” explained Williams. “The occult history spanning centuries and the subjective nature of the cards inspired me to create my own deck of Tarot cards.” 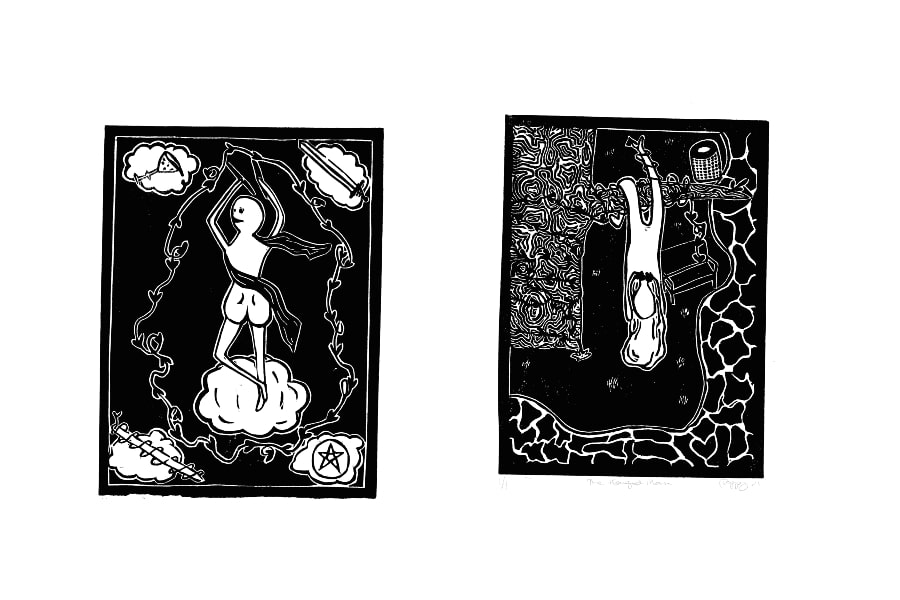 The history of tarot is traceable to centuries past, with roots in Europe. First documented in Italy in the 15th century as a card game, occult readings of tarot are first traceable in 18th century France. Jean-Baptiste ‘Etiella’ Alliette is the first recorded professional tarot occultist, who published his ideas of the intersections between tarot, astrology, the four elements and Humourism.

Unlike the traditionally colourful nature of tarot cards, Williams’ pieces take on a monochromatic aesthetic evoking a foreboding sense of what is to come once on your adventure. Pieces are simplistic in design, yet draw the eye of an audience through their intricate attention to detail and focal motifs.

Poppy Williams – Choose Your Own Adventure opens on Friday, March 18 at China Heights Gallery in Surry Hills, from 6-8pm. The exhibition is showing until Monday, April 3, showing 12-5pm through to its conclusion.