Nabhaan Rizwan is not afraid of doing it all – eventually. Like many of the artists and creatives he is surrounded by, the opportunity to do more – be more – is what energises him. It’s a characteristic that’s symptomatic of his generation. While some may call it multidisciplinary, Rizwan prefers to use the term pluralist. What sets the 24-year-old actor, rapper, artist, and Ilford native apart, however, is his patience. Dissimilar to many of his peers, he tells me he’s prepared to wait. “It’s important to note with the pluralist thing, it’s still really, really important to actually study your craft and immerse yourself in it before you say to the world, ‘Yeah, I’m doing this.’ I’m patient in that way.”

It might seem like a particularly measured approach for someone who made his theatre debut earlier this year, opposite Emma Corrin in the two-man show, ANNA X. But as I quickly learn, Rizwan is devoted to playing the long game, albeit with a few spontaneous moves here and there. It’s a wisdom he acquired early on. 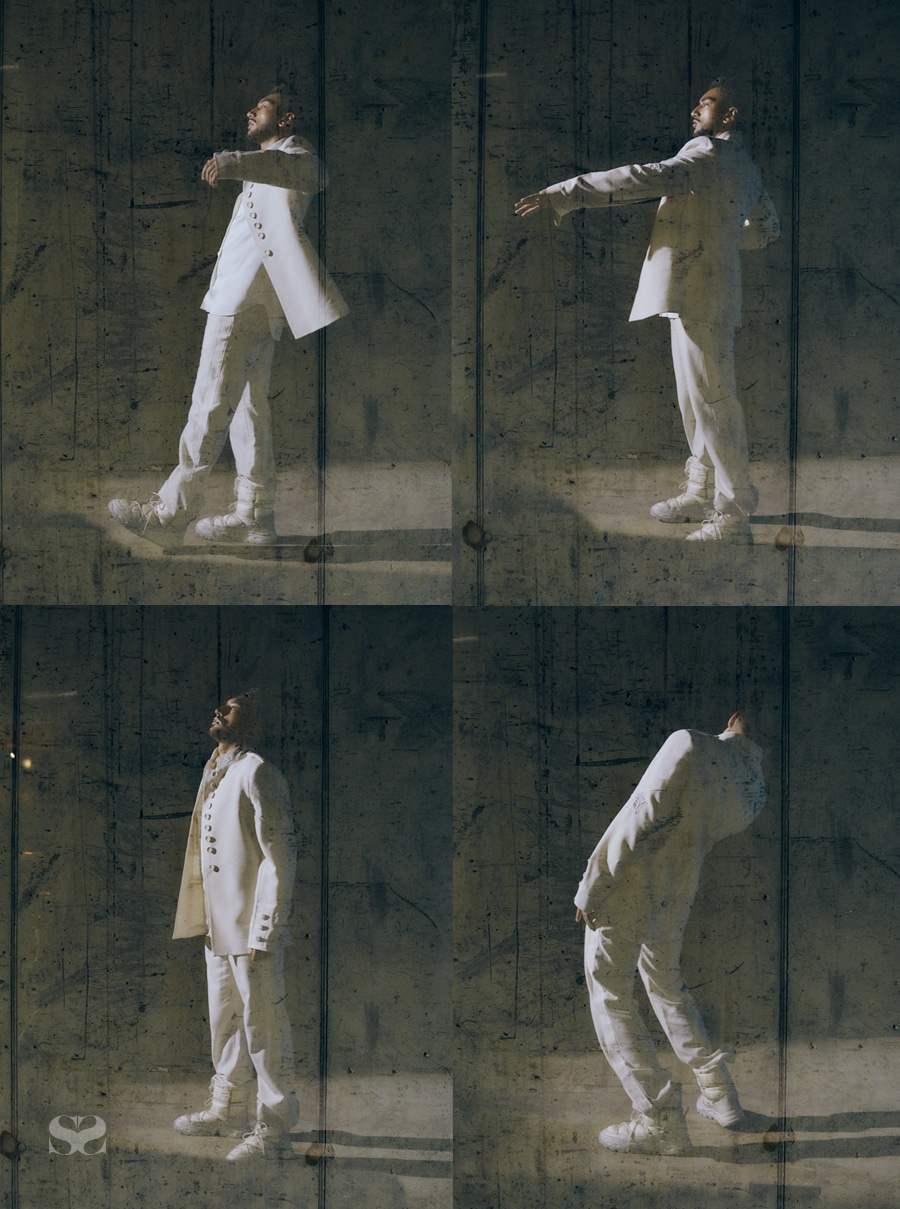 “She [my mother] is probably the first example of a pluralist I had in my life. You speak to her at any given time, and she’ll tell you about the dozens of different projects she’s working on simultaneously,” he shares.

“…She’s issuing her poetry, she’s writing a book on health, she’s putting together a play and she’s doing it all at once.”

Having made his start in the crime thriller series Informer, before moving into the realm of film with the BAFTA-nominated Mogul Mowgli and most recently, The Last Letter to Your Lover, Rizwan’s foray on stage was inevitable. As he explains to me, it was a case of “right time… right way… right scale.” While he was at no point disillusioned by the challenge in front of him, it wasn’t exactly the first time he had performed in front of a live crowd either.

“My mum was nine months pregnant with me when she performed in her first play – one that she wrote, directed and made all the props for in the Town Hall in Ilford where I was born. I guess you could say I had somewhat of a head start.”

“My mum was nine months pregnant with me when she performed in her first play – one that she wrote, directed and made all the props for in the Town Hall in Ilford where I was born. I guess you could say I had somewhat of a head start.” 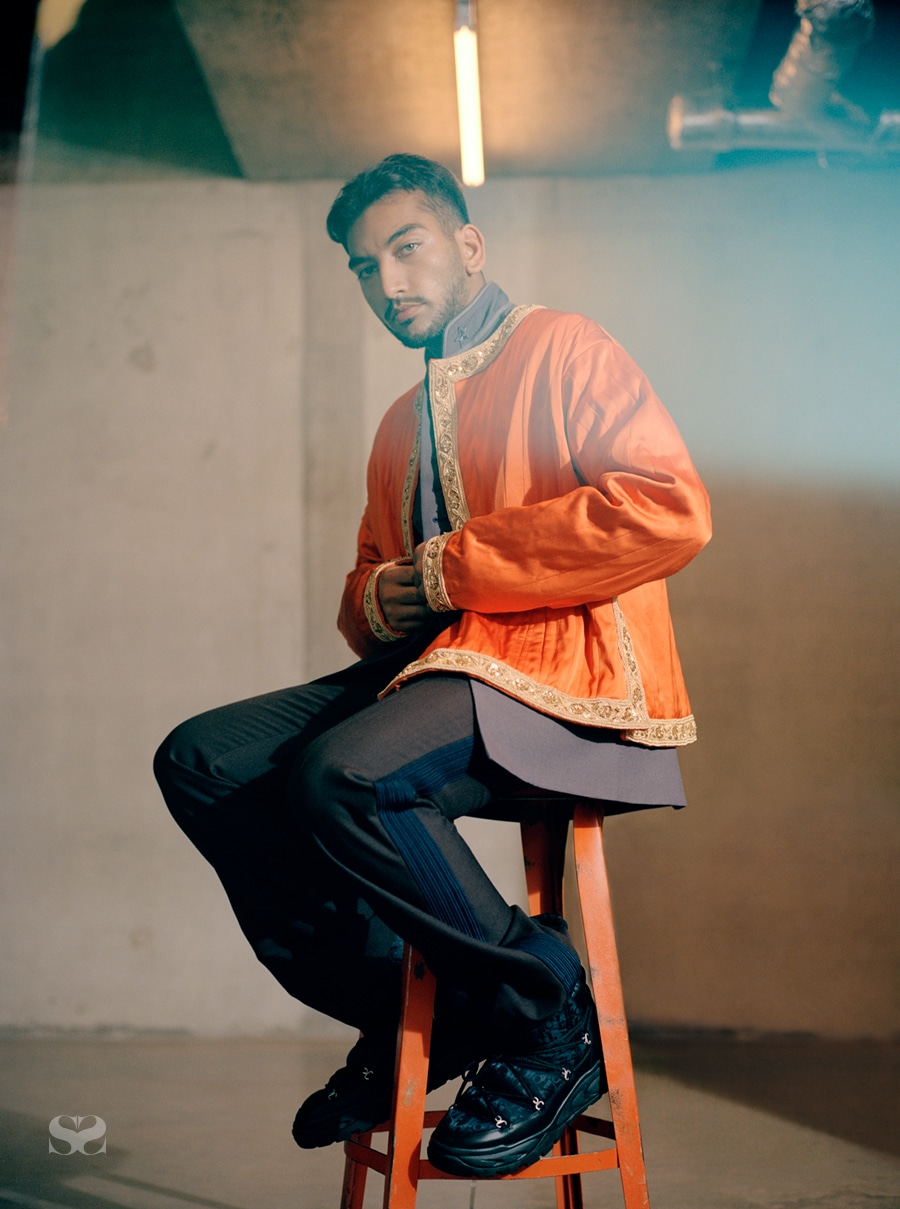 If it wasn’t clear by now, the stream of creativity runs deeply in Rizwan’s family. His mother, an actor and creative in her own right and his grandfather once a Pakistani film director. Despite growing up in what he recalls as a working-class family, his parents placed an equal emphasis on both education and the arts – ensuring that both he and his older brother diversified their activities. Clearly, it paid dividends.

“We just filmed my brother’s pilot, and it’s a lot about our family and upbringing but in an extremely magnified, exaggerated way. My mum is also in it, and of course, my brother is the star of the show. I feel lucky to be able to facilitate that world which we grew up in and know so well into the work we’re doing now.”

Beyond his family, Rizwan fondly remembers being drawn to directors and auteurs who transformed their lived memory into invaluable sources of inspiration. No doubt, he had a keen eye for good taste and great cinema early on. So, when his older brother forced him to participate in mandatory MTV-viewing during their formative years, he was understandably less than enthused. That was until a white-t-shirt wearing, camo-short rocking Pharrell appeared on the screen, and Rizwan was immediately captivated. 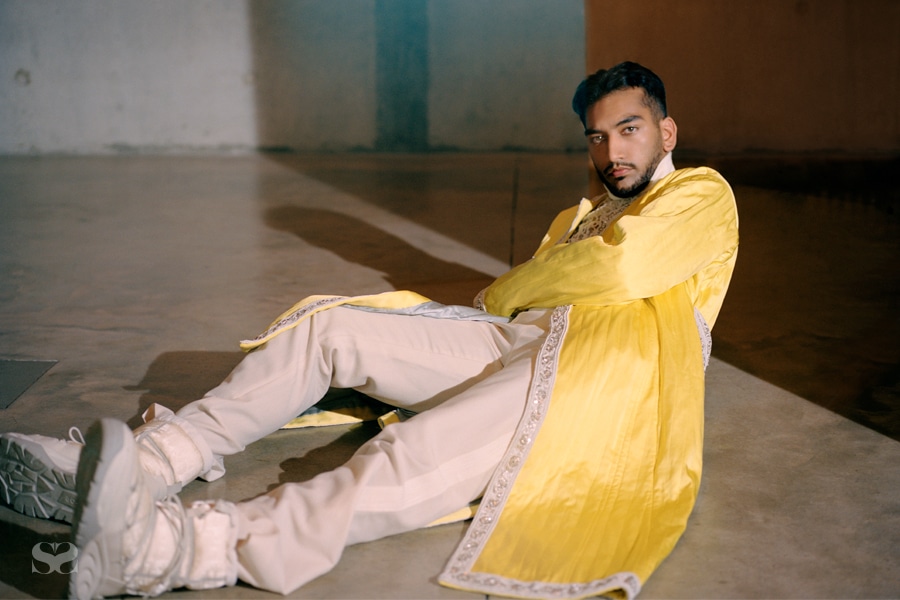 “Even at a young age, I would cringe at some of the music videos that would be playing. Then suddenly, a Pharrell track would come on and I was so enamoured by him. Here was this guy, amongst all the grandeur and chaos of rap music, wearing camo shorts and no jewellery. Just totally owning his aesthetic and sense of self.”

Speaking to Rizwan now, it’s clear that Pharrell’s Midas touch has left its mark. Completely focussed and locked into gear, he’s both prepared and ready to do the work. Collaboration, to him, is a crucial part of his next move forward. “There’s so much I still have to learn in everything I do. To put it frankly, I’m still experimenting – I haven’t self-actualised in that way yet.”

“I’m just fortunate that I’m getting paid to figure it all out.”

But like any good artist, it’s not just all work and no play. In Rizwan’s world, he believes the two can peacefully co-exist. Speaking on how he has been managing his creative output recently, he explains that much of his approach has been grounded in revisiting the work he loves to create and consume. His most frequented genre? Magical realism. 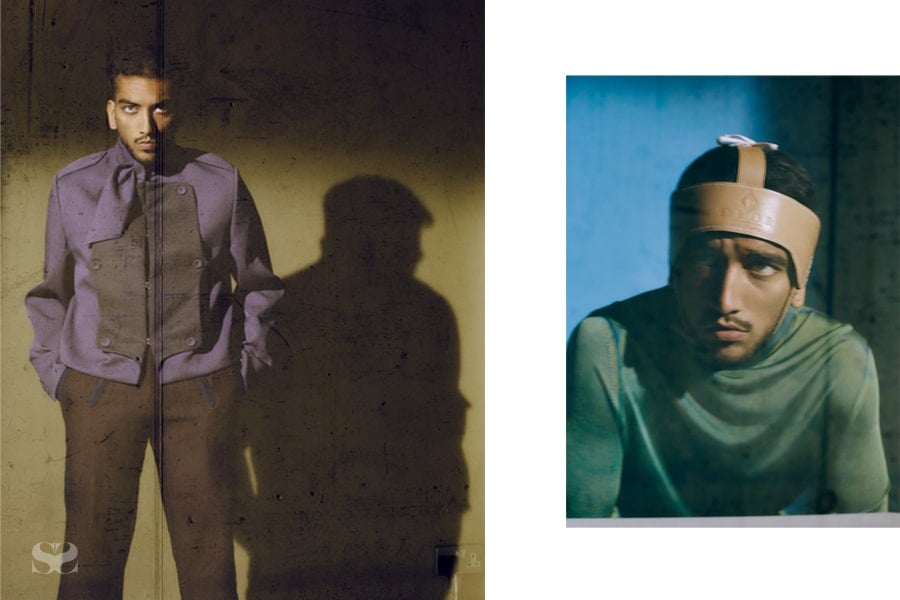 “I realised not long ago that people watch and read things for different reasons. My reason is that I want to forget my sense of self. I want to be completely transported into that other world. People have different vehicles and ways of achieving that, but for me it’s art and it’s world building.” 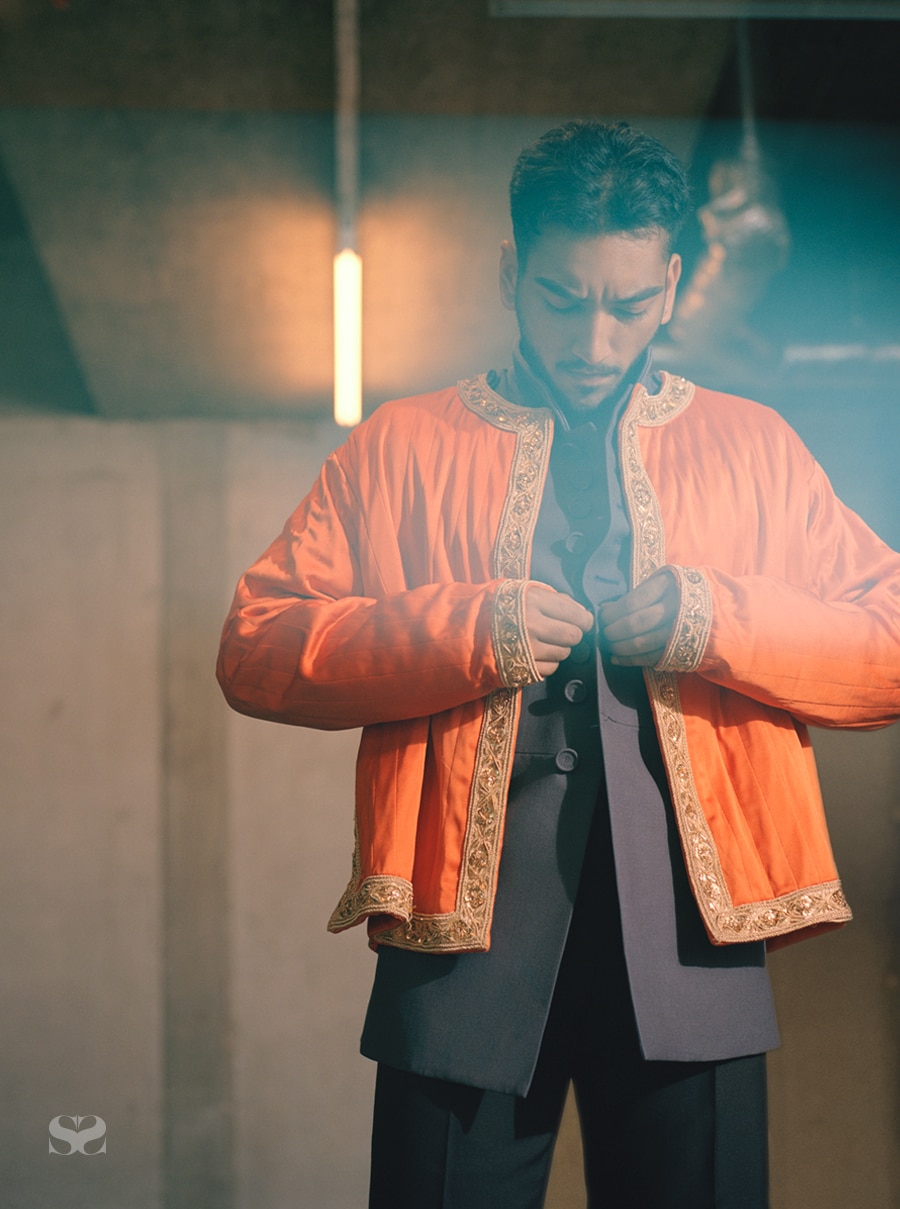 “I realised not long ago that people watch and read things for different reasons. My reason is that I want to forget my sense of self. I want to be completely transported into that other world. People have different vehicles and ways of achieving that, but for me it’s art and it’s world building.”

Mikhail Bulgakov’s The Master and Margarita happens to be one of those vessels for Rizwan. A self-professed ‘Russia file’, the book has everything he loves about Russian literature crammed within its 392 pages. “It’s funny, sharp and zany,” he tells me. While of course, not forgetting to also mention that the manuscript is rumoured to be in the hands of Baz Luhrmann…

If not leading the cast in Luhrmann’s screen adaption, where does Rizwan hope to find himself this time next year?

“I’m so glad you asked this, because in the best possible way, I don’t know. And that’s purely because my options are very much open right now.”

“Miles Davis said, if you want to be an artist, you have to continue to be about change. So, for now, I’m going to stick to my guns and continue in that vein. Hopefully, I’ll keep surprising people along the way.” 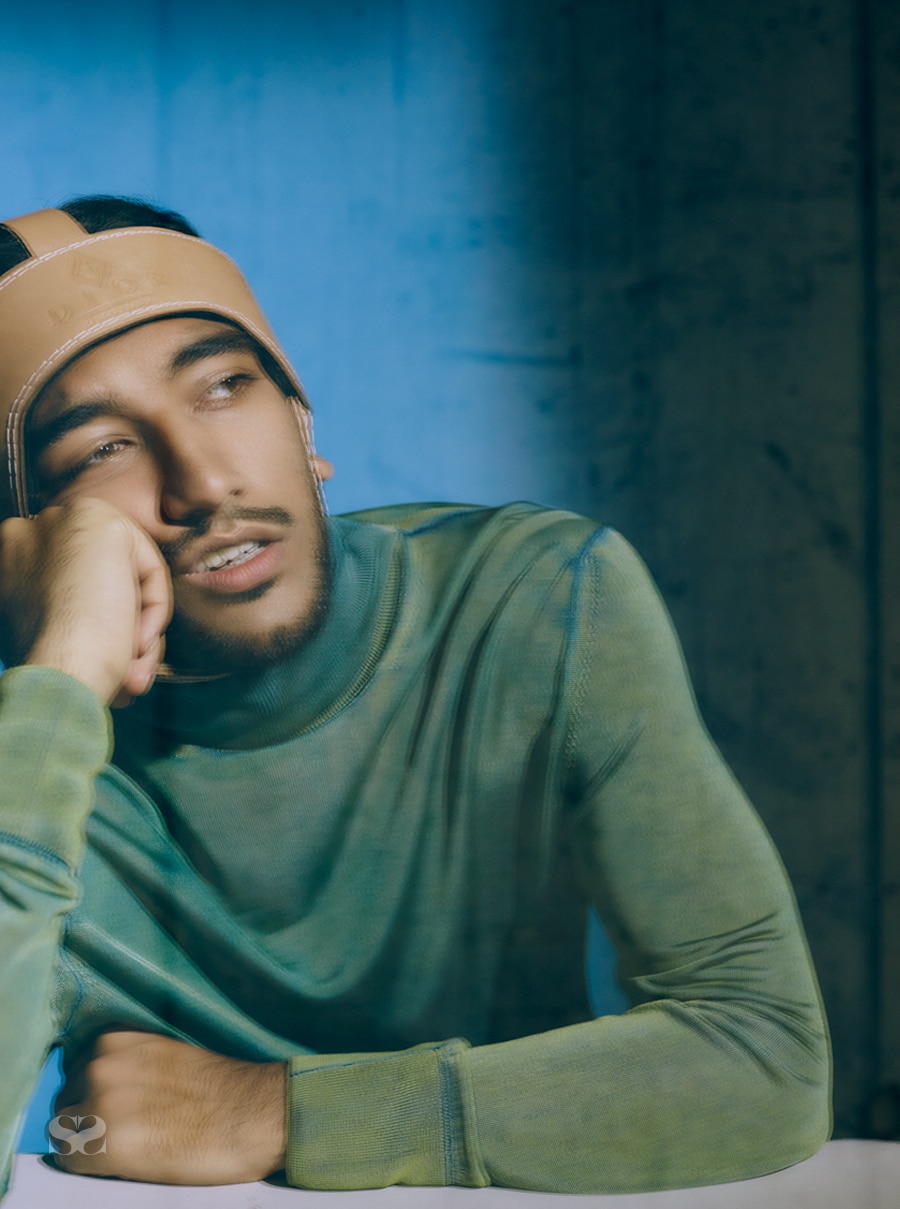 A selection of the men's Winter 21 collection is available to purchase on the new online boutique at Dior.com now.

For more, get to know our cover star Hannah Wick through RUSSH's exclusive model profile feature. And to experience the Taste issue from beginning to end, the September issue of RUSSH will be available on newsstands from September 2 and through our shop now. Find a stockist near you.

PREVIOUS
Whitney Houston's 'The Bodyguard' is getting a remake
NEXT
A king of the screen: We round up 8 of Adam Driver's best movies for required viewing