Well, it's about time we had some exciting news for Pride month and now we can well and truly break out the rainbow confetti. After what has been a lengthy campaign of speculation, and many blurry behind the scenes stills, we finally have our first official look at Harry Styles and Emma Corrin's queer cop drama My Policeman.

Announced in 2020, the Amazon Prime film was originally slated to star Lily James in the co-lead role which Corrin has since taken over. While COVID-19 caused considerable delay the film is finally seeing the light of say with an official theatrical release date. And for fellow Style's rabid fans, the tail end of the year looks to be an exciting one with the promise of not one but two film roles in close conjunction. We've spoken here before about our pending excitement for Don't Worry Darling, but what else do we know about this latest morsel of Michael Grandage's queer period drama?

Here is your first look at the film.

In an exclusive from Vanity Fair, two newly-released stills have dropped with Patrick showing Marion and Tom some art at a gallery, Harry looking every bit the suave gent of the era. Another shows Tom and Marion staring sweetly into each other’s eyes as they rest by the edge of a swimming pool. A trailer has yet to have dropped, but we will be sure to update when it does. 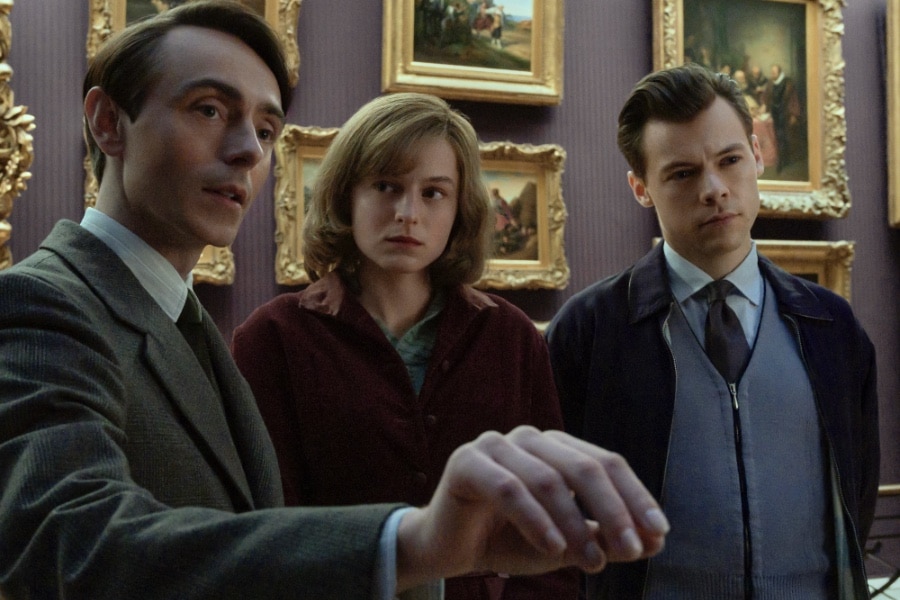 What’s the plot of My Policeman?

As previously mentioned, Based on the 2012 novel by author Bethan Roberts, My Policeman is a decade-spanning plot that focuses on the life of Marion and local policeman Tom, a budding couple living in 1950s Brighton. Marion, besotted with Tom get's thrown for a loop when he introduces her to Patrick a distinguished intellectual, infatuated with Tom, together the trio live shielding their relationship from a homophobic society until the dynamic reaches a traumatic breaking point.

What about those saucy scenes?

A recent interview with Capital FM’s Roman Kemp did shed some light on this. Speaking about My Policeman and the parallels of Don’t Worry Darling, Styles confirmed there will be definitively “saucy scenes” in both. “I don’t know if you can watch either with your parents,” he said. “I’m gonna have to do another one.”

When is it being released?

You can watch the queer Harry Styles fantasy you’ve been concocting since you were a 13-year-old 1D stan when it hits cinemas on 21 October 2022. keep in mind, it will have an aptly classified R rating, so those actual teens will have to do some heavy sneaking around to get a glimpse. International Harry fans won't have long to wait with the movie streaming globally from 4 November 2022.

You can watch the first trailer, below.

PREVIOUS
What to watch once you're finished with 'Everything I Know About Love'
NEXT
Incognito Art Show and Butterfly Blue Mall: Here's what's happening across Australia this weekend