“We have art not to die of the truth.” Marc Jacobs' show notes, quoting Nietzsche, read. In the wake of all that has happened this week with the US Supreme Court's grave decision to overturn Roe V. Wade, it would likely feel remiss for Marc Jacobs not to acknowledge this in certain ways for his Fall 2022 show held in the New York Public Library.

Perhaps it was the use of this quote, or in the threads of the opening four looks – the first, a cobalt patent leather dress worn by a model with a swollen belly, and the next three, what appeared to be Jacobs' take on scrubs in grey, hospital green, and lavender. Perhaps it was the show title, simply called Choice or the handmaiden-esque oversized headscarves that reoccurred in different fabrications, that made it feel as though Jacobs, alongside a large percentage of the rest of the world, were listening, and mourning the verdict. 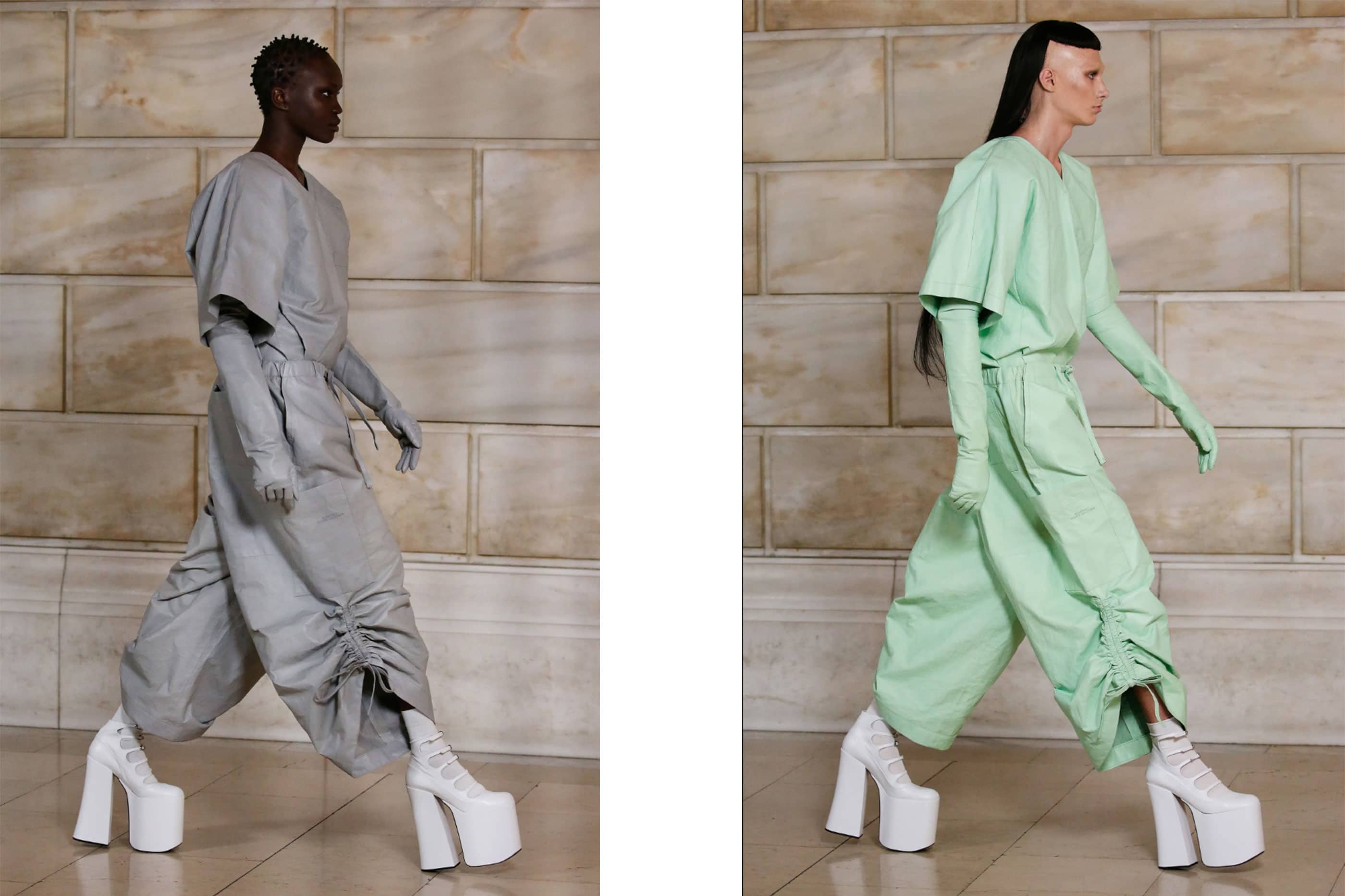 “Amidst an ever-changing landscape of resources, unexpected obstacles and a world feverishly digitizing new standards of reality, my sentiment is unwavering — creativity is essential to living,” the show notes read. “We share our choices in contrast to the ongoing brutality and ugliness of a world beyond our insulated but not impermeable walls.”

And although dystopian and confronting, Jacobs allowed for joy and fun to be present, too. Not as a way to ignore all that is rightfully pulling our focus from fashion, but to add a note of hope for the future. 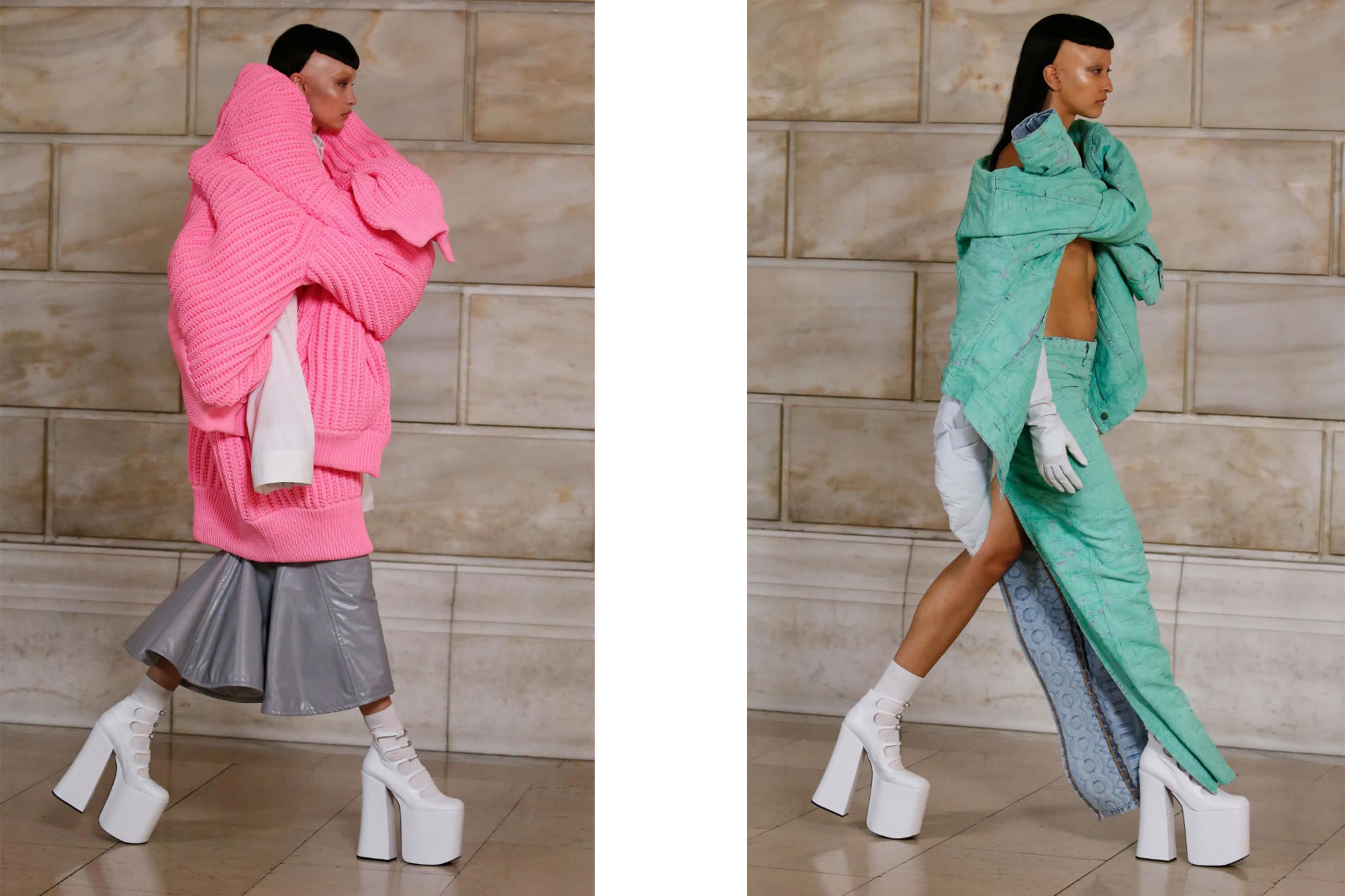 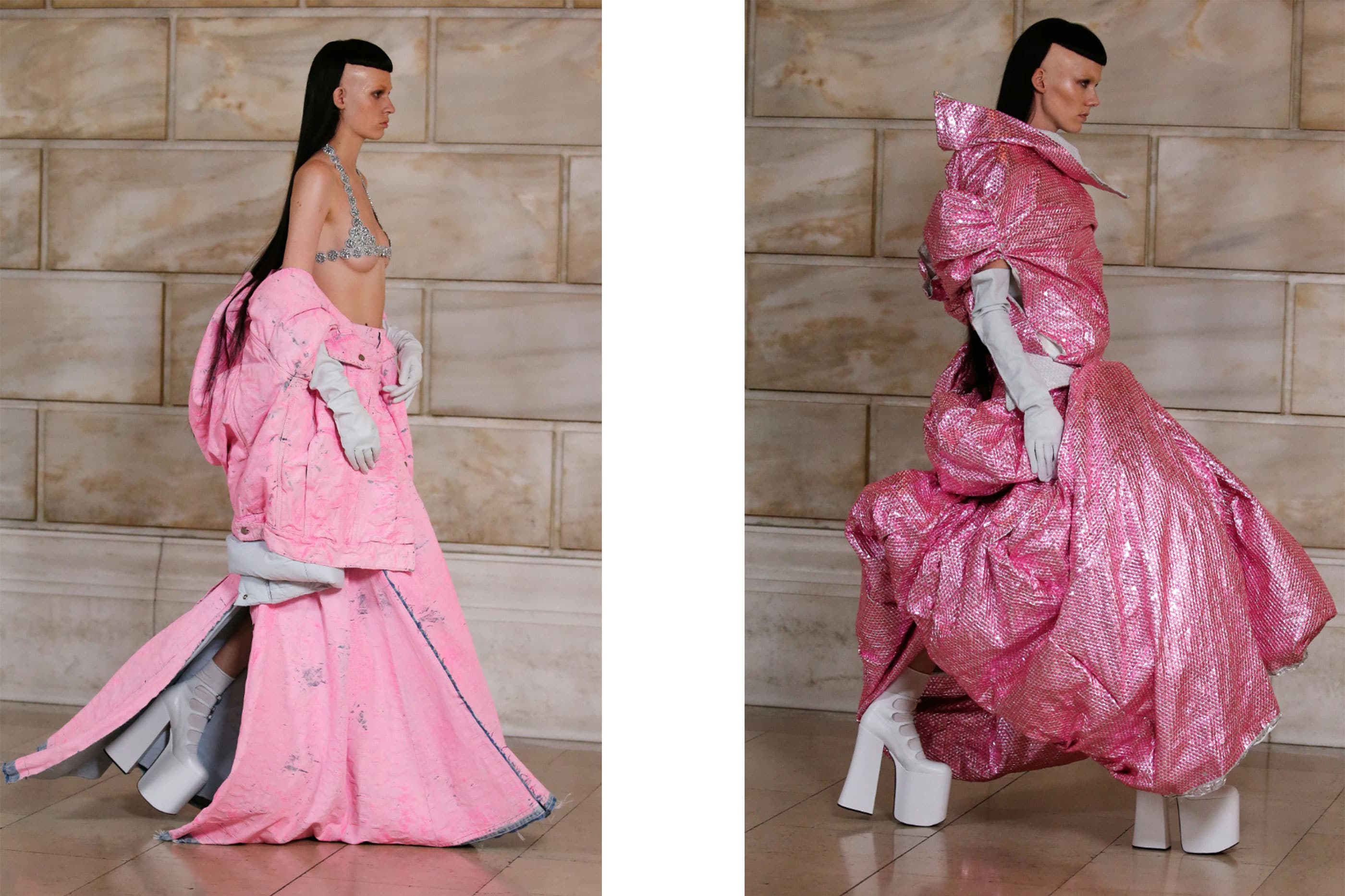 There were supersized bubblegum-toned knitted sweatshirts that swamped the towering models, acting as the perfect padding for a long train or car ride. Gargantuan jeans were slung low on the waist and paired with barely-there rhinestone bikini tops – a reoccurring trend on the runway these days – while ball gowns that played with the proposition of volume glided out like meringues. That is, if meringues were crafted out of plastic, foil, glass, paper, vinyl and rubber. Almost every exit was accompanied by an opera glove, worn loose enough to remind us of something slightly more surgical, alongside Jacobs' iconic towering platform pumps in black and white, giving the models a sense of being on stilts. 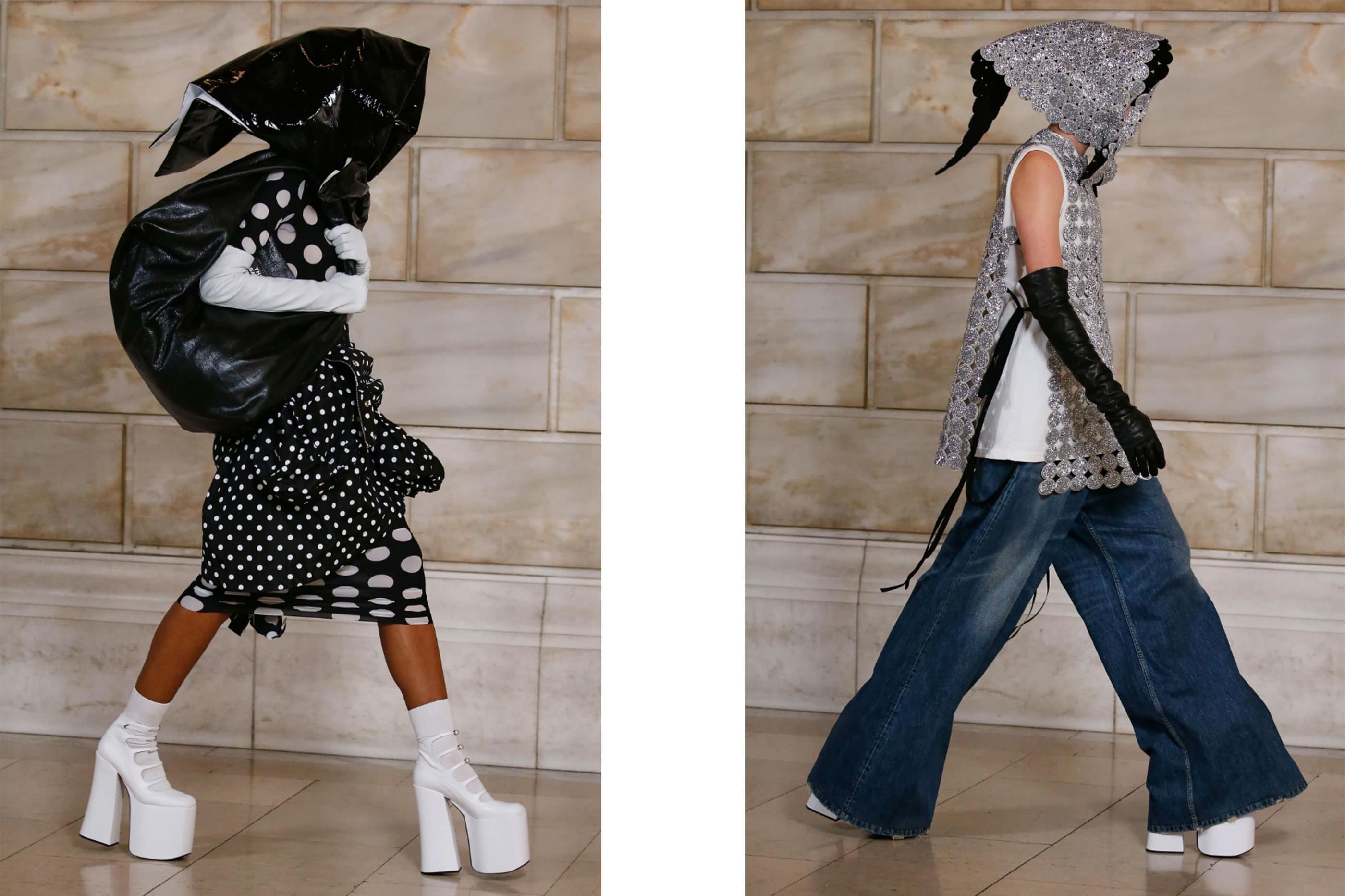 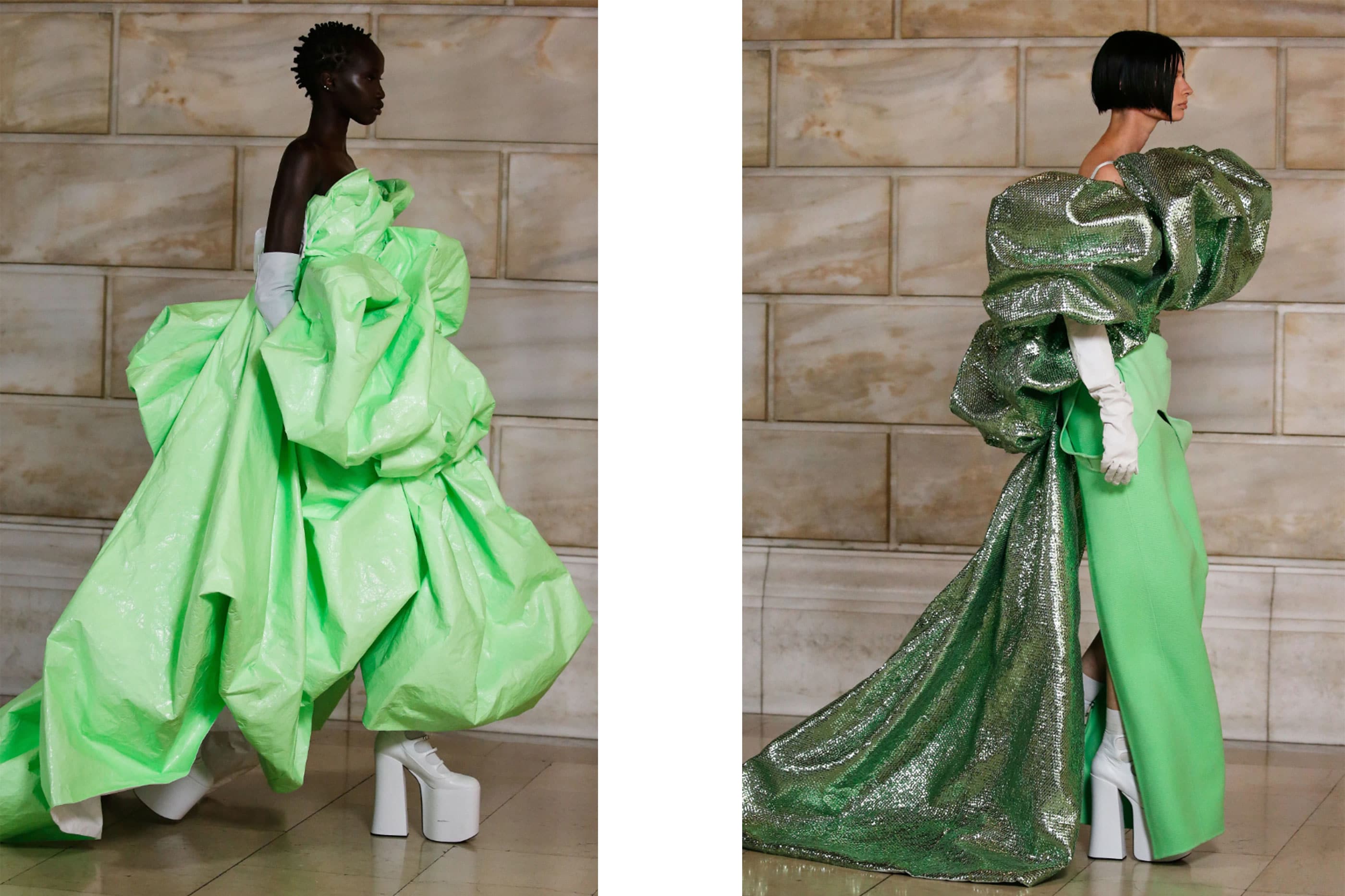 For Fall 2022, Marc Jacobs is walking the line between not enough and too much, and he balances in the middle with such astuteness. From gowns that could be in the Met Museum tomorrow, to quiet tailoring that hones in on his cutting skills, Jacobs reminds us who the true king of New York really is, and how his theatrics got him there in the first place.

PREVIOUS
And the bride wore Nike! Jacquemus' FW22 show was sporty and celebratory
NEXT
Dominic Fike in Saint Laurent and Gucci pets: These are our favourite fashion moments this week