Last year, as day four of Australian Afterpay Fashion Week fatigue set in, a name that many of us were intrigued to see emerged on the schedule: Iordanes Spyridon Gogos. We filtered into the Carriageworks gallery on the second last day, nothing but curiosity serving as expectation of what designer Jordan Gogos would bring for his debut show. 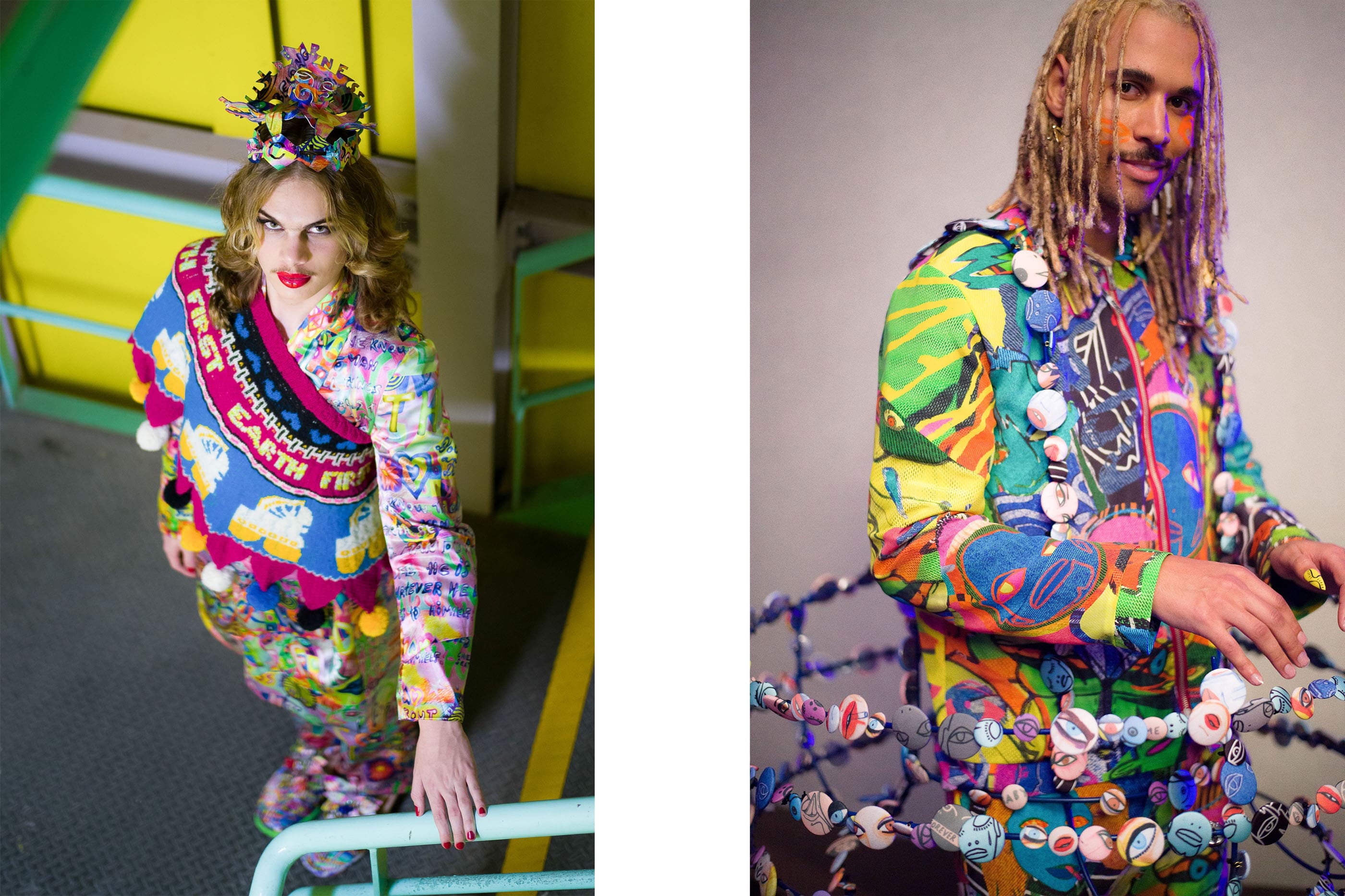 To thumping music, amongst a psychedelic set, wearable art practically danced down the runway in place of forever blazers and slip dresses. Two weeks post show, once the music had faded from our eardrums and the whirlwind of post-show press success from his debut which, in his words "just fuckin' went off the chain", had settled a little, we were able to speak about the future of Iordanes Spyridon Gogos. At the time, the Powerhouse Museum had just acquired a collection of the pieces. One year on, and Gogos was the first designer to show at the museum in its 142-year history. 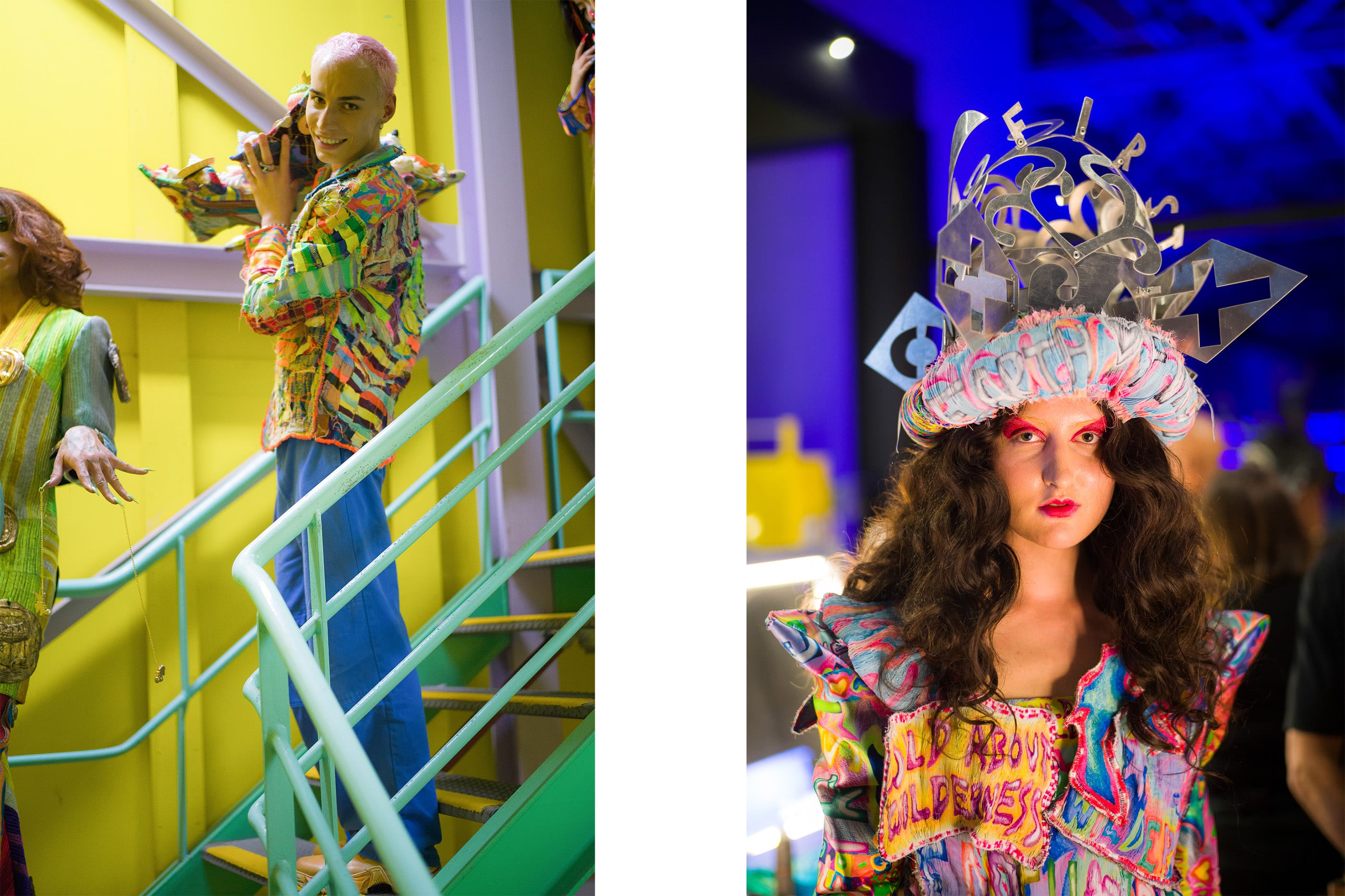 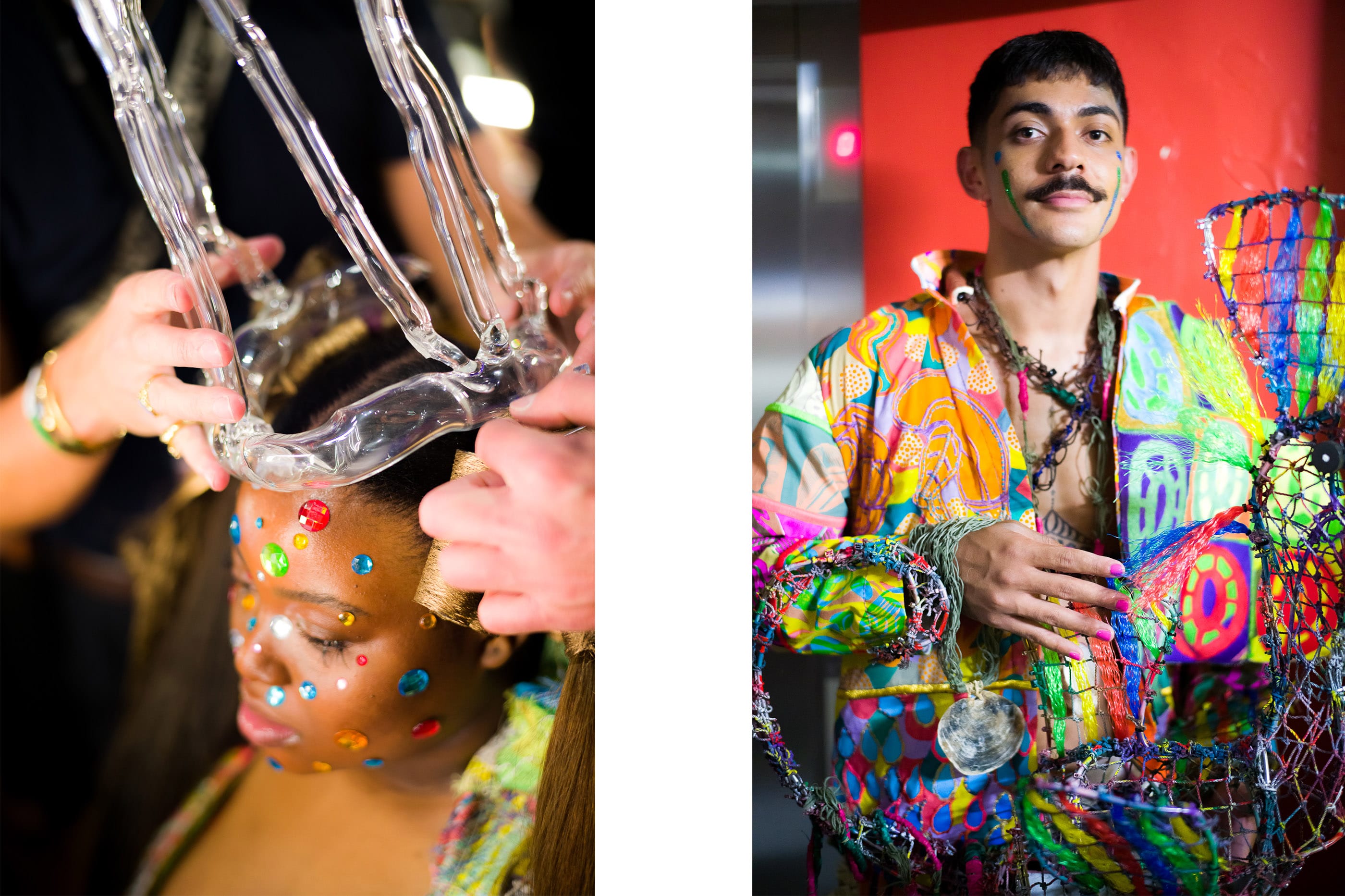 "I'm feeling both excited and a bit numb." Gogos tells me on FaceTime one week before the show. He is crouched in a cupboard charging his phone while people swarm around him carrying flashes of neon fabric. Even down the phone, the pre-show energy is high, the video pauses every few minutes so he can decline another call. It's been non-stop for weeks, but he is still his usual vibrant self. "After the last show, when we spoke, we went into lockdown. And then I basically threw myself into this again, almost like a 10 times bigger project. I bridged this partnership with the museum, moved into the museum to set up a whole studio space, and it's almost been like three projects in one, because the set design with the museum was so enormous." Which it was. From the neon painted papier-mâché monolithic objects of last season to towering structures surrounding the cross-shaped runway and illuminated by black-lights, if the sheer scale of the production were anything to go off for the anticipation of his sophomore show, one would swiftly understand that this was a big f*cking deal. 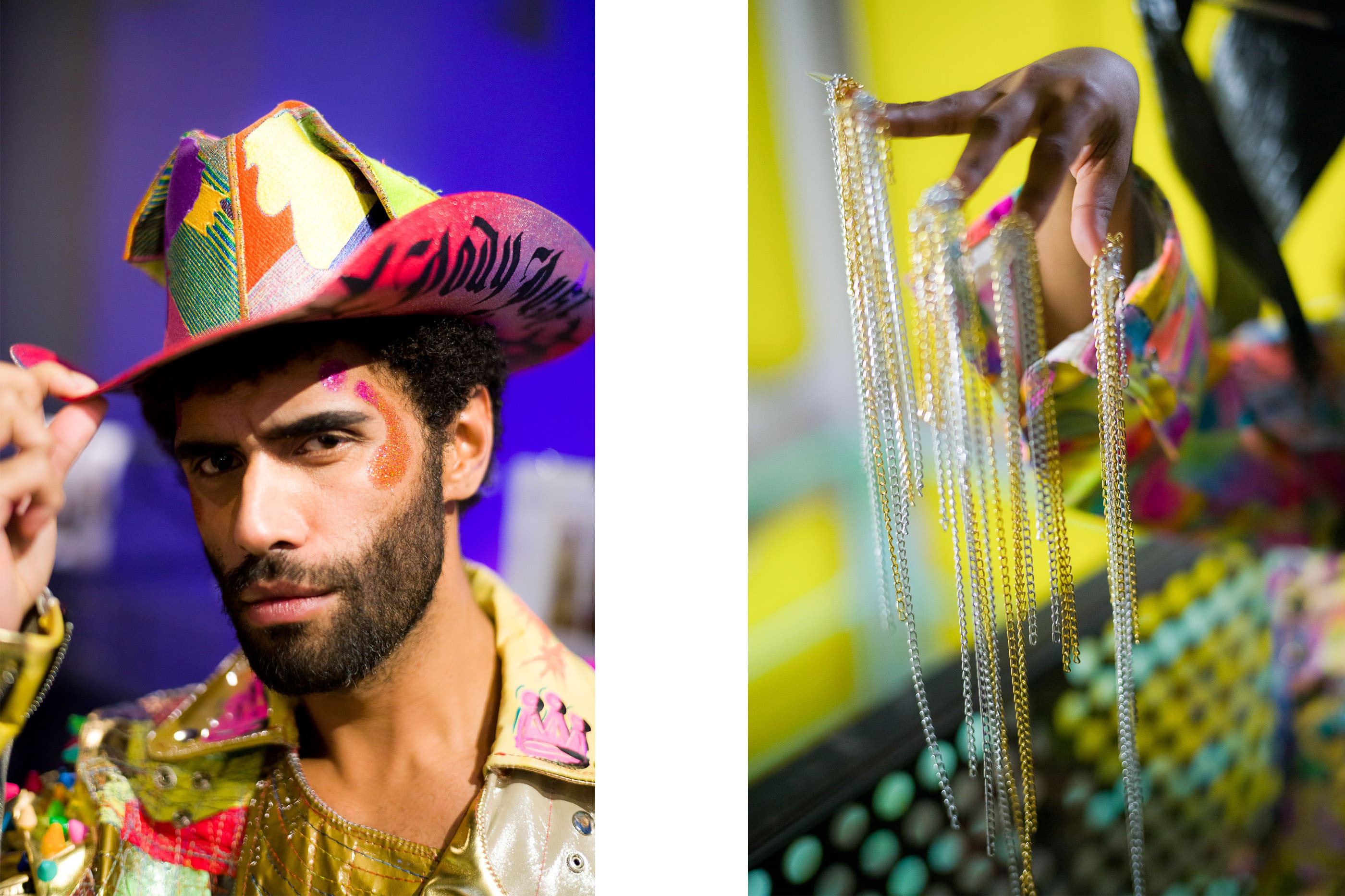 The show itself was like a mega club during a particularly transcendental trip. Musical anthems we all know and love thumped through speakers as the first exit emerged onto the runway, a psychedelic printed silk midi dress (the print was by Brittany Wyper) with triangular hips and sharpened shoulders created by Rube Pedder, was accompanied by a pair of knee-high boots by Julia Baldini and accessories created by Pedder and Max Rixon. The full look was inspired by Australian design icon Jenny Kee's work. Last year, Gogos enlisted a slew of collaborators to help him pull off what would be the show of the week. This year, for Iordanes Spyridon Gogos' sophomore show, he's teamed up with 56 creatives to bring forward a collection that is truly grounded in community.

"There are so many cross collaborations from people who worked on a Patrick Church print or like, Jenny Kee had seven different designers working on pieces (Max Rixon, Rube Pedder, Yasmin Moussalli, Sunnie Fong, Brittany Wyper, Julia Baldini, Anjelica Kilkolly, and Joanne Morton). She had two hand knitters that did the knits, so there were people who were kind of forced to speak to each other and work together, so the looks are just way more built out." Gogos explains, noting that while the excitement he feels for the work they have created is something completely special, managing 56 creatives has been a serious undertaking. "It's not just a dress this year. There's a shirt, there's a dress, there are pendants, there are shoes that are collaborations, there are hats that are collaborations, there are so many facets of each look this year."

One look at any of the exits from the show and this is evident. A closer look, and there is a level of refinement to the collection since his last. Last year, Gogos produced an astounding portion of his debut collection on a domestic singer sewing machine in his studio apartment. Now, he has industrial machines for days at his Powerhouse space, but is very conscious to communicate that he's not been alone. In fact, he was only responsible for making one solo look this year. The rest, have been in collaboration with his 56 creatives, all of whom, he continues to credit via his Instagram in posts detailing the looks.

Take, for example, Julia Baldini who worked across footwear, creating works of art on each shoe, which were offered as anything from knee-high boots to pillowy, platform mary-janes. For the Jenny Kee looks, the brand utilised recycled materials from Kee and Linda Jackson’s seminal Powerhouse retrospective Step Into Paradise for the lining of garments, shoes, set design and other elements.

In collaboration with Sally Dan-Cuthbert, Gogos created a silhouette intended to capture the label's relationship with Sally and the Gallery, a work of art walked down the runway as a result, clad with shells and headdresses and everything else. There were fishing nets attached to pieces, created by  winner of the National Indigenous Fashion Awards 2021 Simone Arno; Albus Lumen's Marina Afonina even contributed, with the only monochromatic look offered as a white dress with glass droplets hanging from it. 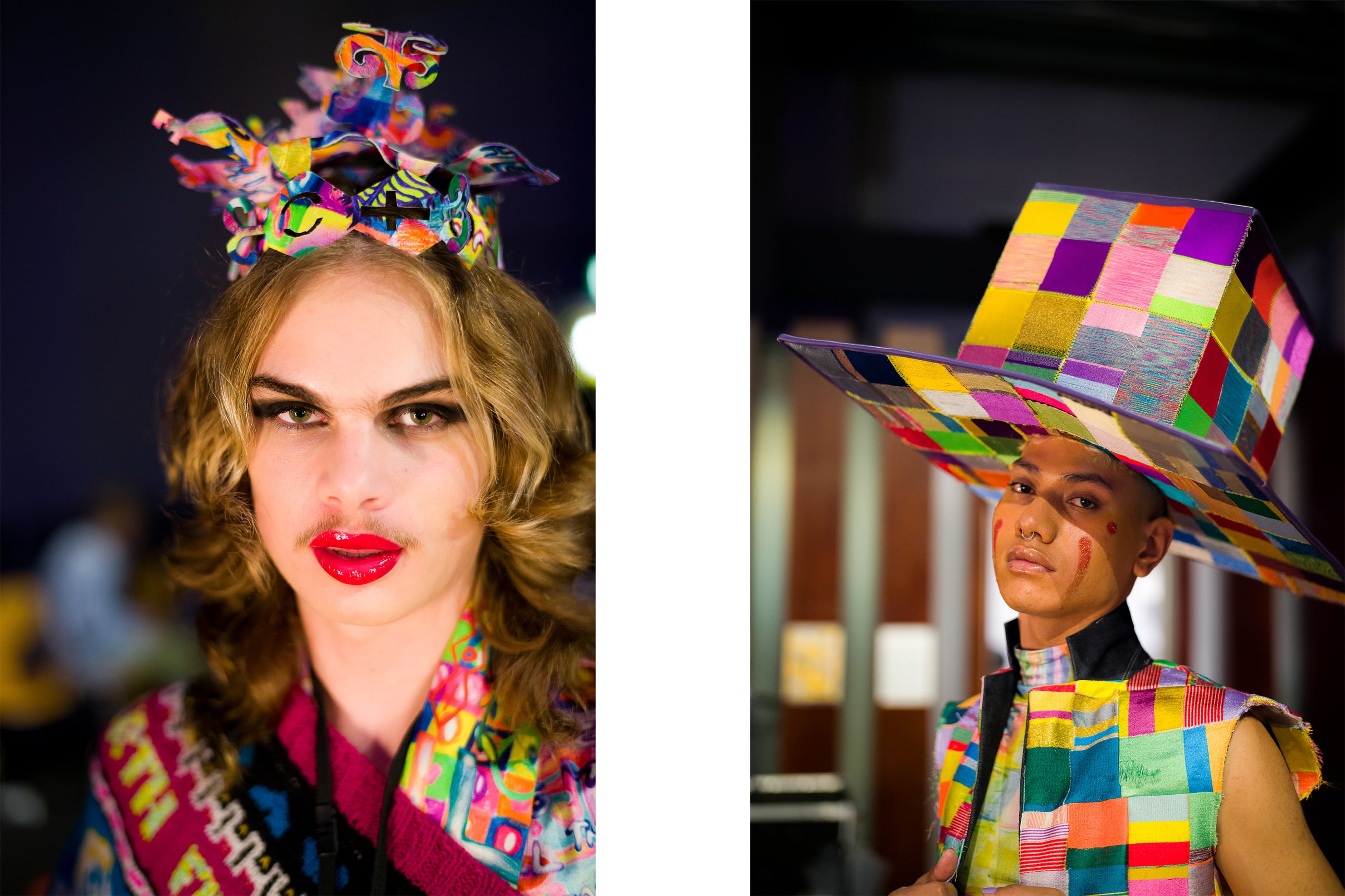 For some, what marched down the runway to remixes of Hilary Duff's best tracks may feel difficult to put into an everyday context for conventional fashion, to those I would say the point has been entirely missed. While Gogos reflects on last year's positive press and how he was surprised at the lack of criticism received for something so bold, its arguable that it's very hard to condemn someone who is throwing everything they've got at something that yields such an ecstatically joyful result.

For Gogos, the purpose is not necessarily to sell clothes in hordes and have an e-commerce site that is crawled 8,000 times per-day (which he might one day, if you keep your eyes peeled), it's to carve out a space where innovation is consistently at the forefront of the brand, one that is fostering freshness not only within its casting – this year led by model, House of Silky member, and now casting director Basjia Almaan – but for his "army" of collaborators, too. Mostly, it's about taking a chance on himself and what he feels he can build for his community. 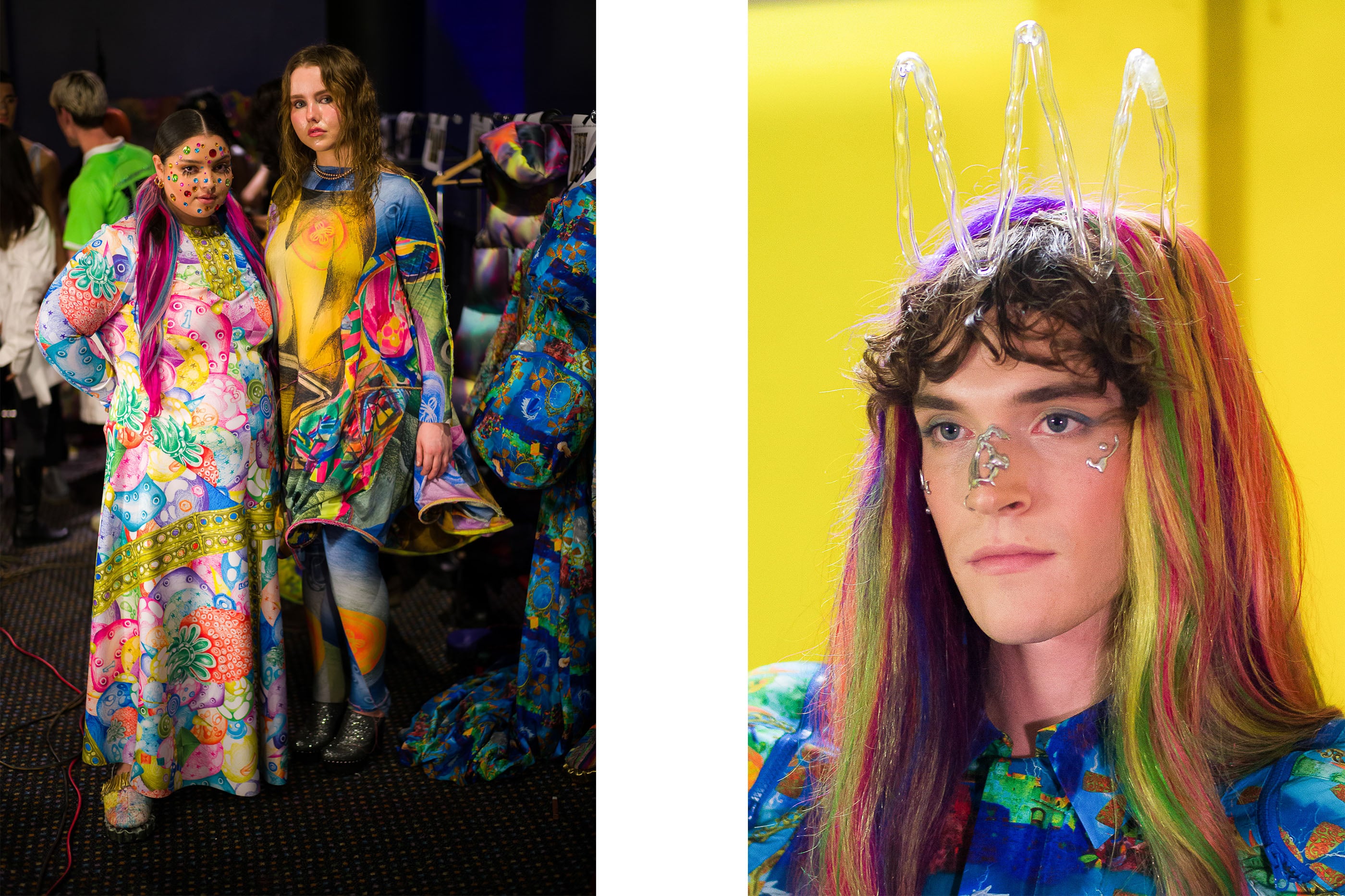 "For this partnership with the museum, when I contacted them, that wasn't an existing thing, just waiting for an applicant or someone to apply." He says. "I reached out, and I put my hand up, and I saw that fashion had that access that could provide to many other people. With 56 collaborators, I don't think that's ever been done before in Australia. There's so many things that feel so exciting to offer. People get to collaborate with Jenny Kee. Like, outside of the brand, where does someone fresh out of uni work with an icon like Jenny Kee? The brand is doing things that haven't been done before here." 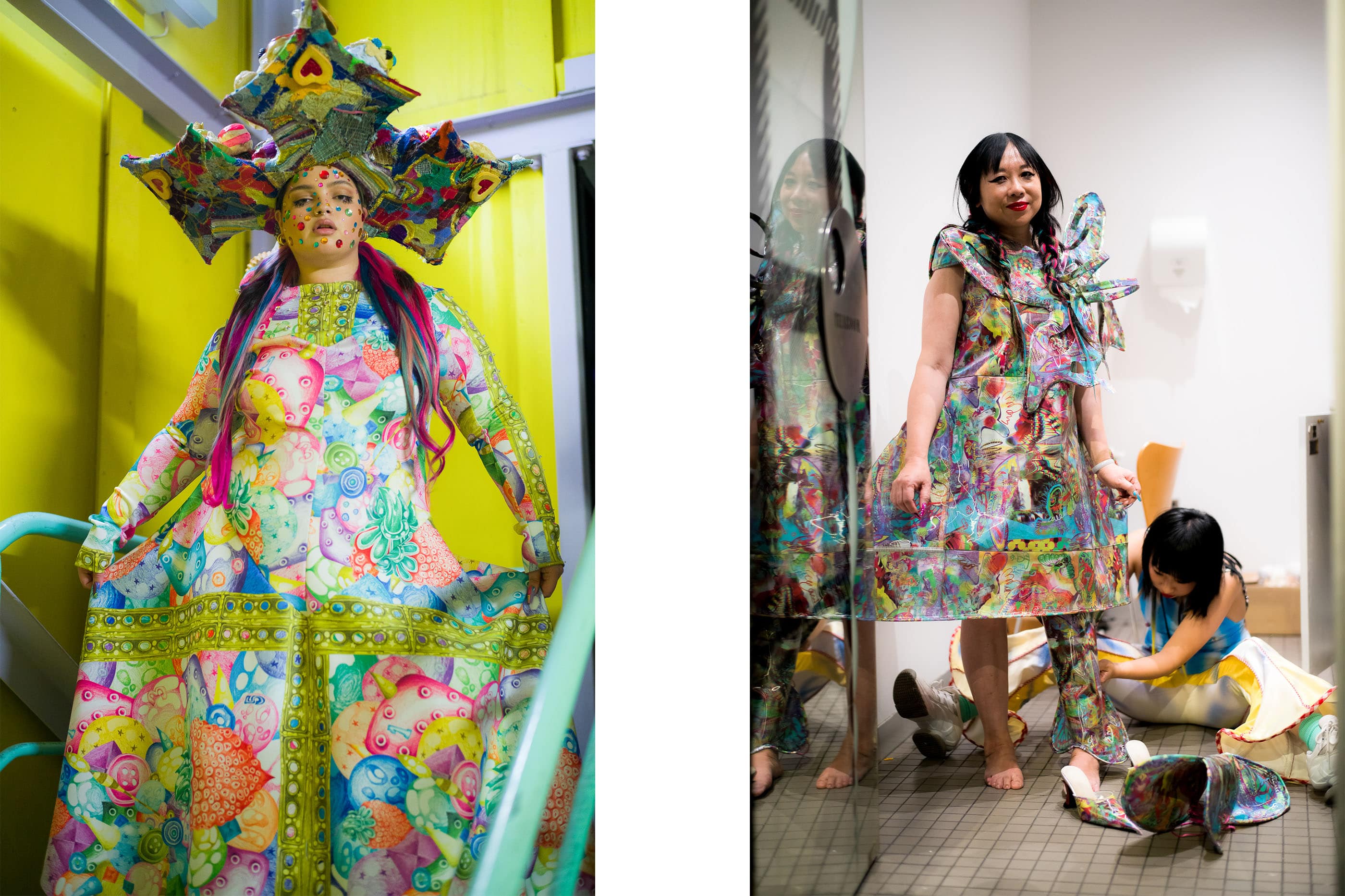 Last year, the same could be said about the casting of his debut show, which was filled with Gogos' friends and collaborators, and simultaneously heralded as the most inclusive show of the week. Riding on this momentum, and following Almaan's call out of the industry's lack of diversity last year, Gogos brought Almaan onboard this year as casting director for the show. 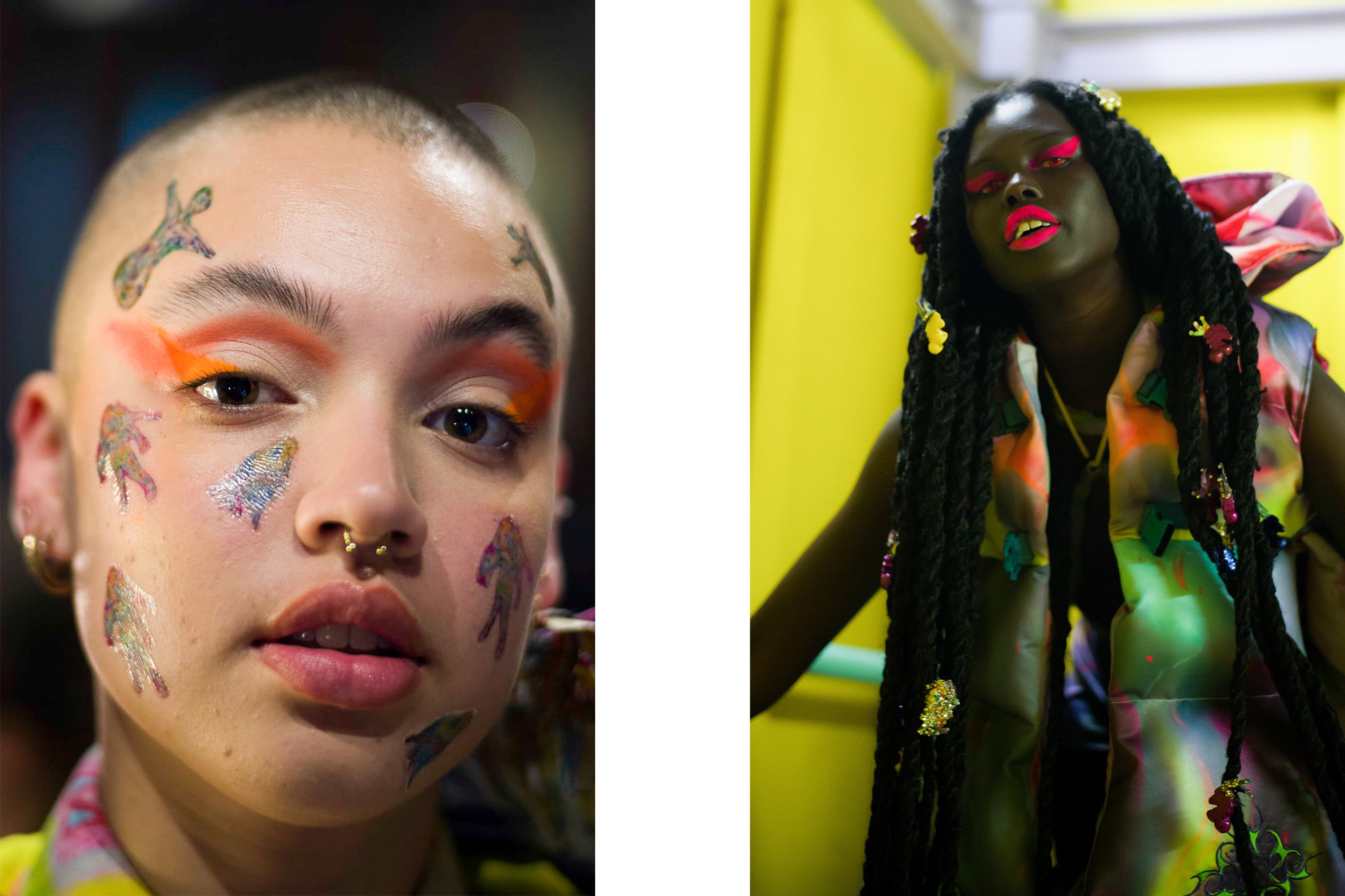 "Bringing Basjia on was incredible because I couldn't have the same a naivety this year." Gogos says. "Last year was like, 'oh, it's all natural', but you almost can't move authentically in that way again. So the one person that I felt like had a really big impact and made noise last year was Basjia." He says. For Gogos, it was important to make a point to bring someone in who had spoken out about the gaps in casting, instead of gatekeeping them once they'd made some noise, he tells me. For Almaan, the process wasn't as daunting as it initially sounded.

"I definitely intended to showcase new faces, to showcase Eora, Sydney's range of talent of models and people who would bring phenomenal energy to the runway. At the same time, it didn’t feel like an intentional process because all I had to do to find people was look at the people around me." Almaan says, noting that all she had to do was look around the spaces she already exists in to find her cast. 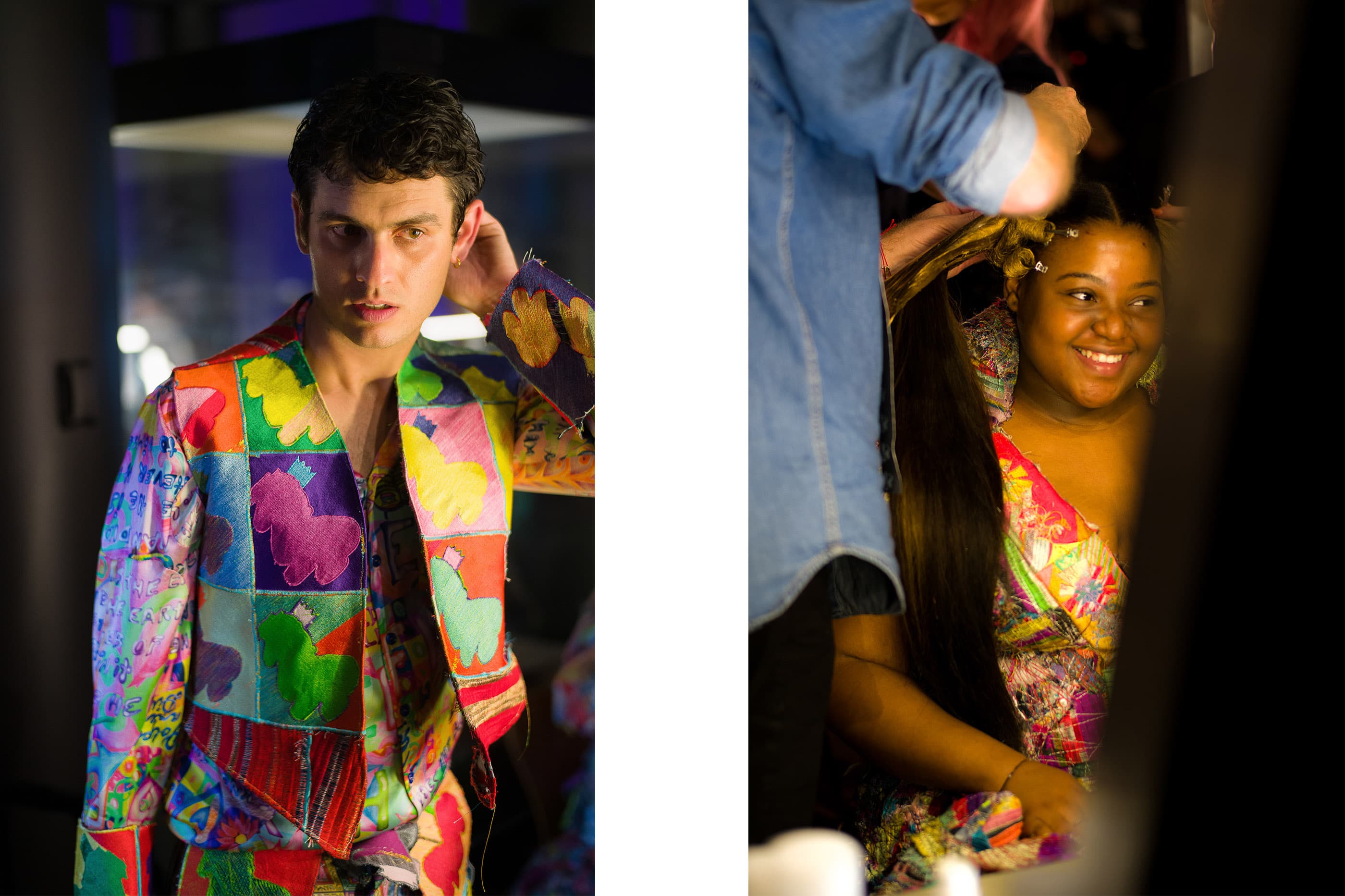 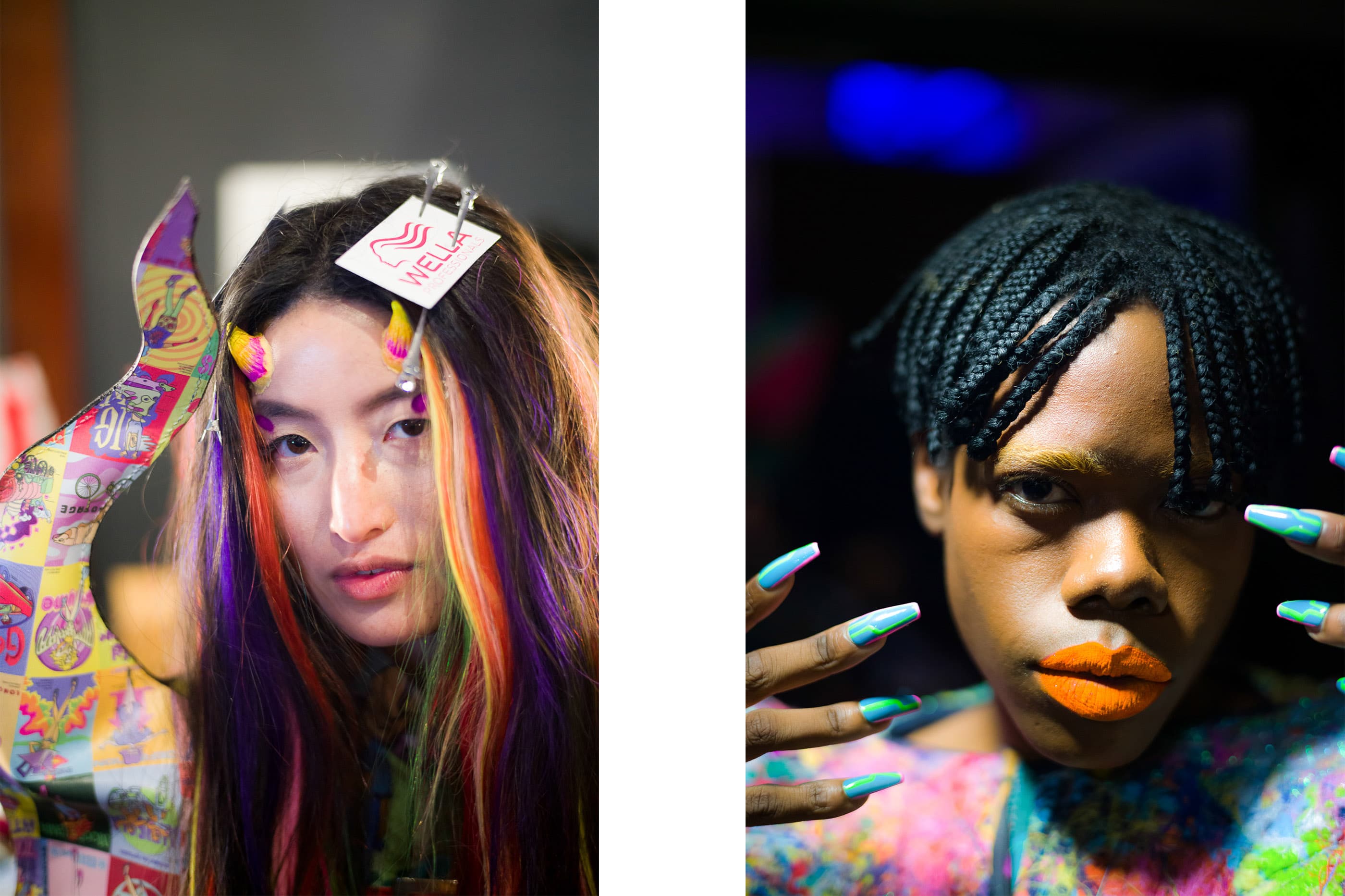 And Gogos was right. The result could have only happened with someone who knew exactly what they were working towards to keep such a vast cast feel so genuinely liberated and authentic. In place of tokenism and box-checking, was joy and power, and in the world of Iordanes Spyridon Gogos, there are enough seats at the table for everyone to carry this torch.

"One thing that really was special to me was to think about the communities each person was representing, to communicate that having all different looks and energies on that runway would ultimately show people of younger generations that they can be celebrated for being exactly who they are." Almaan says. "Media plays a huge part in how people are valued and seen on a global scale, the fashion industry has historically excluded a lot of different people from what they perceive as acceptable or beautiful, I wanted to showcase that all people are beautiful and all people deserve to be celebrated in fashion." 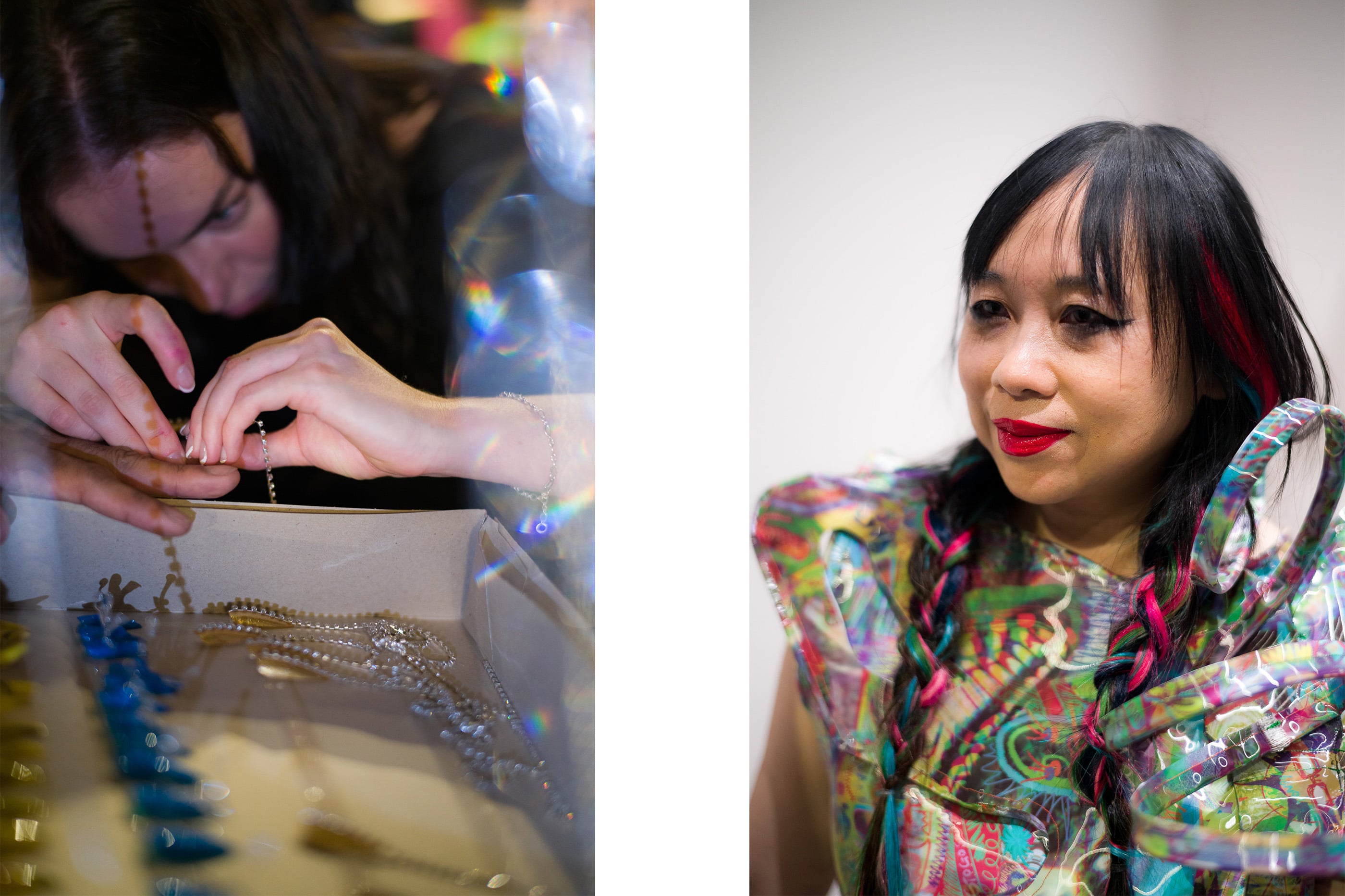 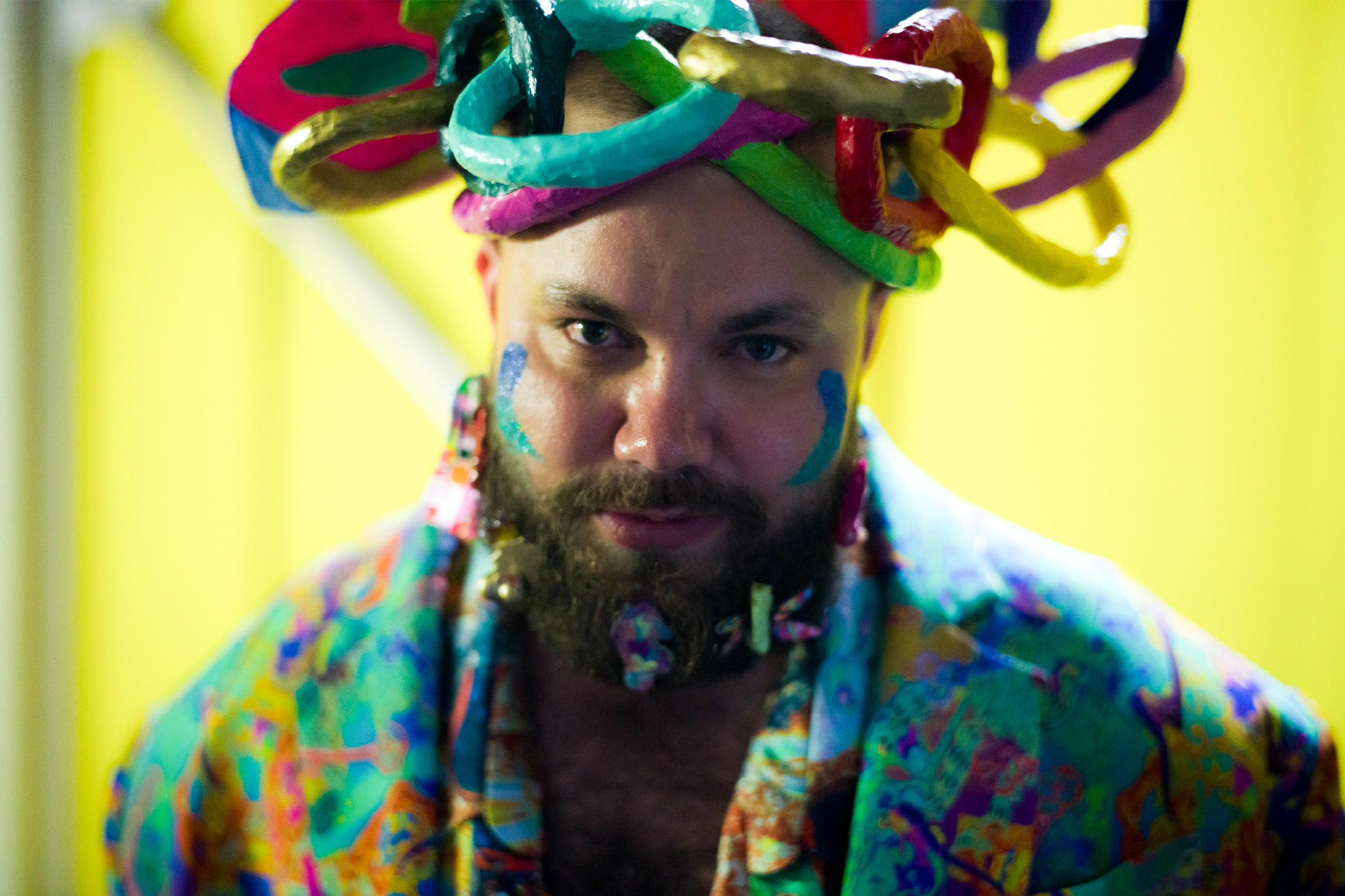 Photographed by Kitty Callaghan on the Leica M11.

PREVIOUS
Jacquemus is teaming up with Nike for a collection of minimalist sportswear
NEXT
Our shores have been graced with Magnifica, a High Jewellery collection from Bulgari 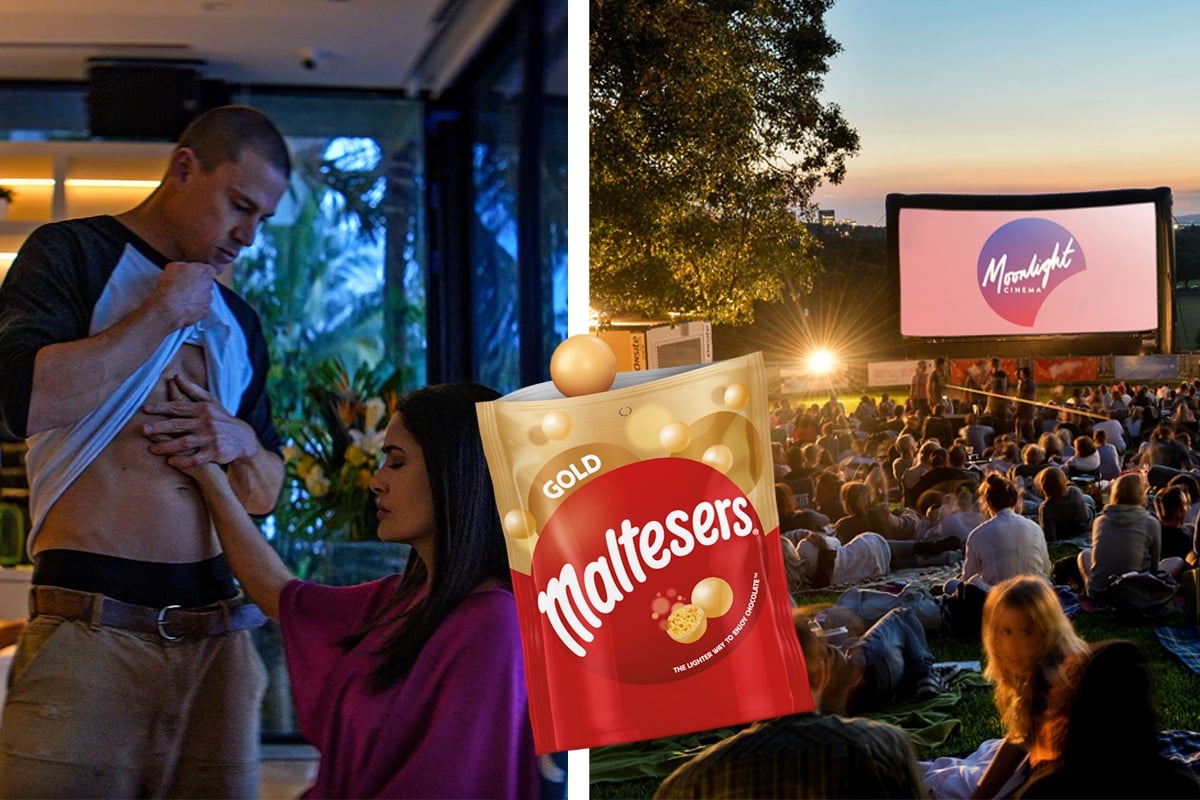