If you attend or follow the fashion circuit each season, you'll be well aware that while we all look forward to seeing what House names present for each collection, London Fashion Week is really about the emerging. Take Nensi Dojaka for example, the Albanian Central Saint Martins graduate who just secured the LVMH prize, or Harris Reed, whose tailored suit and hoop skirt dress shot the young designer to fame after appearing on Harry Styles' for his iconic Vogue cover shoot. There is something in the water in London that acts as an incubus for emerging talent, and Fashion East, an umbrella showcase for emerging designers, is undoubtedly one of the central shows the city gets excited for year after year.

For Fall 2022, focus was pulled to attention to detail and technique. The theatrics of it all – a common theme from recent graduates wanting to make an impact – were scaled back, revealing collections that honed design signatures in a nightclub in Shadwell, and gave us a taste of what's to come for the next generation of talent. 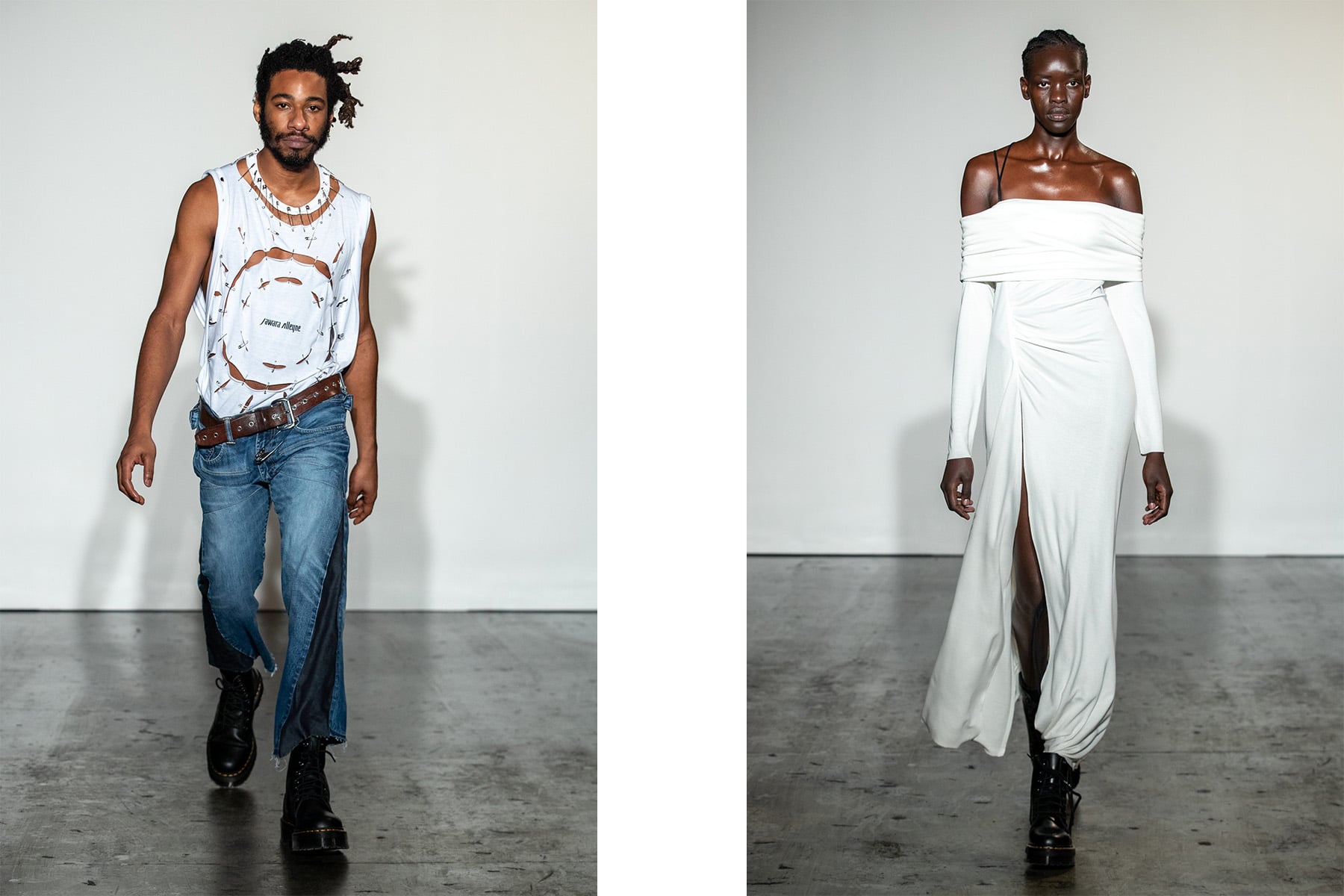 For his first ever runway debut, Alleyne offered his signature punk infused menswear was spliced with expert draping and a sense of wearbility that isn't always served up. Punky, DIY motifs were intercepted by elegant gowns and tailored jackets, while gossamer shirts were pieced together using safety pins, while nods to Martin Margiela were made with purposefully inside out blazers.  In an interview with I-D's Charlie Porter, the designer attributes this to his Caribbean upbringing: “For us, clothes need to be comfortable, regardless of when you’re wearing it,” he says. “The main thing is to feel you can just slip into it.” 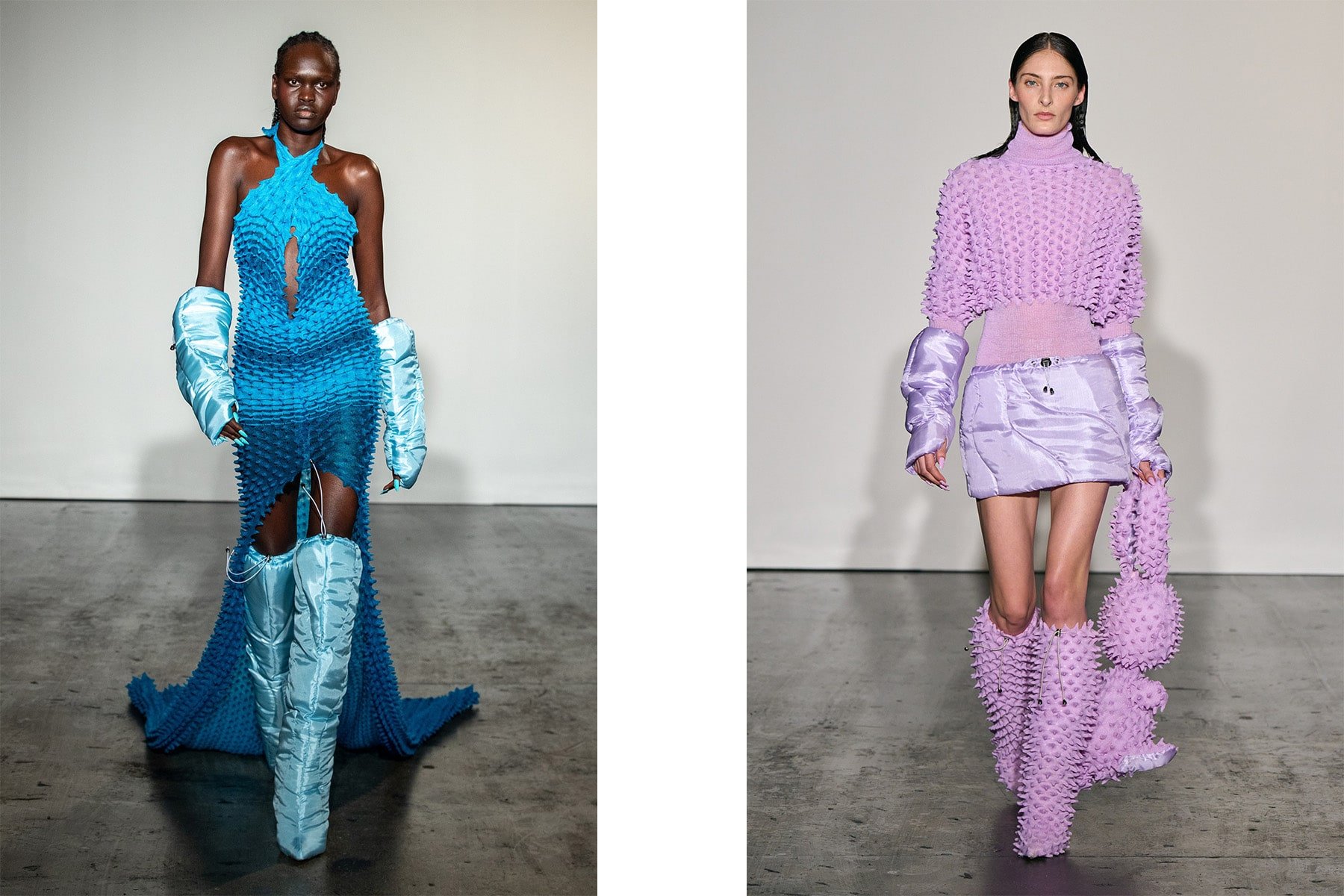 For ravers everywhere, Chet Lo's neon hedgehog knits are given an arctic spin for Fall 2022. The designer's signature spiky fabric was padded out and layered atop ear muffs and snow boots, the perfect accompaniment for the designers clingy, two piece silhouettes which were adorned with ostrich feather plumes. Satin puffer quilting made up mini skirts, scarves, and hooded vests, while faux fur hoods and separates added to the offering of a sort-of tundra-fit raver in a cyberpunk realm. 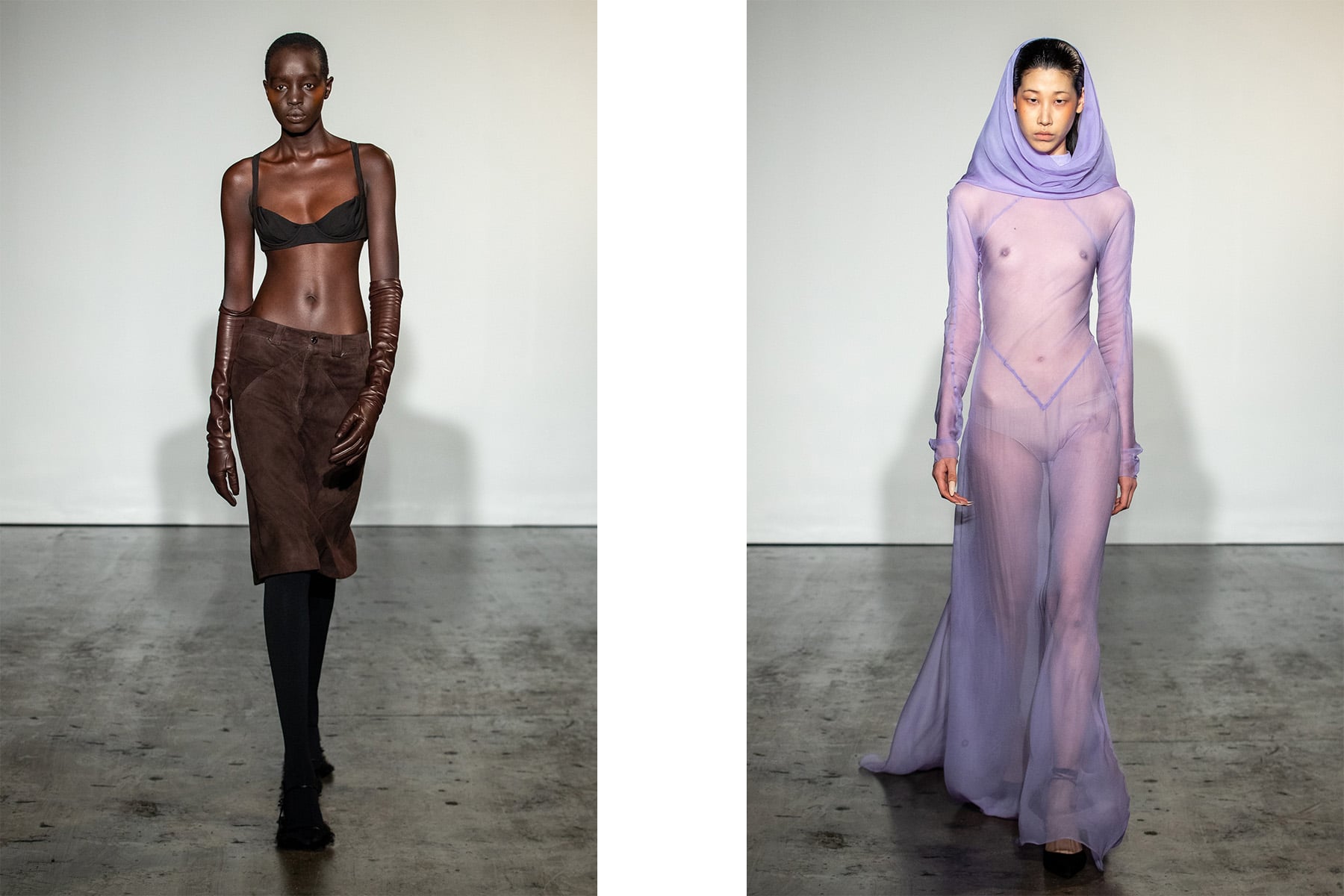 For the closing collection, Maximilian Davis presented his final collection as part of the Fashion East showcase. It is the yound designer's fourth season with the talent incubator, and in this short time, he has made such a lasting impression, that he was recently announced as one of the semi finalists for this year's LVMH Prize. For Fall 2022, Maximilian explores traditional British design codes and infuses them with modern sensibility in precisely tailored jackets and box-pleat mini skirt, tactile black and chocolate trench coats, and shearling trimmed bombers.

The collection is refined, offering an expansive mix between svelt all black looks and chocolately suede skirts paired with bra tops and pleather opera gloves. There are slinky yet conservative jersey ensembles and plunging v neck going out tops worn with leather mini skirts and leather belted trousers.

In the show notes, the prolific designer touches on faith as a driving force for himself and his family upon moving to the English countryside from Manchester  “My family wanted to have something to follow, which is in line with the importance religion holds for so many Black families,” he said. “Ever since slavery, Black communities have looked to God for strength, for a belief that this will all come to an end, for security and guidance.” In the collection, this came out in thorn motifs that wrapped around the sleeves of a white jersey gown, and again in the closing look: a hooded floor length gown crafted of featherlight lavender crepe.

PREVIOUS
It's official, the Miu Miu skirt set rules our lives
NEXT
A flaming hot delivery of all the best street style from London Fashion Week Fall 2022