Undeniably, Euphoria is the voice a generation. It's an unwavering and unsanitised view into what life can be like for some young people amidst today's culture. It's gritty, it's uncomfortable, it's sad, it's heartfelt and, in parts, it's triggering.

As one of the show's leads, Hunter Schafer plays Jules, a role that has earned her a status as a beauty icon and a label as a role model for queer and trans folks. But Schafer doesn't like to think of herself as spokesperson, "I don’t think I should be a spokesperson for any community!" she says. Rather than talking about her identity, instead she says she would rather explore these themes in her work "because it takes a more philosophical approach to transness and queerness."

In an intimate interview with Porter Magazine, Schafer sits down to discuss life, her new position as an ambassador for Shiseido and how she felt when Euphoria was first released..

Read the highlights before or head to Porter for more.

On co-writing and co-producing Jules’s special episode of the cult series Euphoria:

“During quarantine, [Sam and I would] call each other and chat shit and throw ideas around. We started writing a different script and then that got put aside. He was tossing around certain ideas and for some reason Jules was trending on Twitter. That helped us cement what we did in the end. I helped write the final script and was there for preproduction and helped to plan out the shots and storyboard it. All of that influenced the performance because I knew the script on this whole other level.”

On how she uses the experiences of her character, Jules, to process parts of her own life:

“A lot of her spirals line up with Sam’s and my spirals. I know that not every show functions like this, but Sam is so collaborative, open and encouraging. Working on this character has been the most cathartic artistic experience I’ve ever had.” 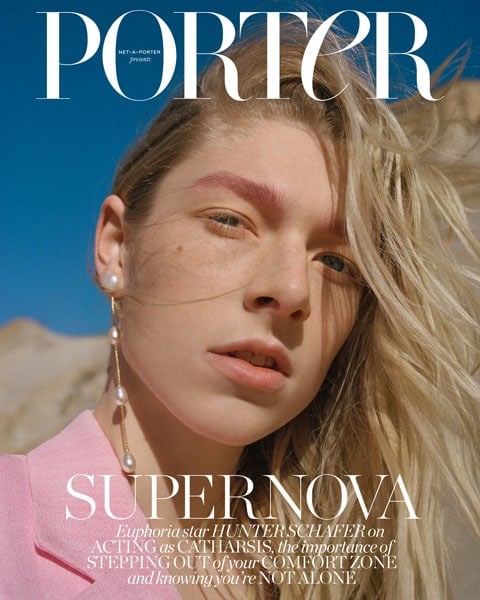 Hunter Schafer on how she felt when Euphoria was first released:

“The first couple of weeks, when the show came out, were a little scary – because I don’t think people knew what it was. But, by the end, people resonated with it and would message me and say that they felt seen or [that they] could come out or think about something in a certain way, and that is pretty special.”

On how Euphoria provides a platform for discussion about trans visibility and queerness:

“I am far more interested in talking about it in something like the [Euphoria special] episode because it takes a more philosophical approach to transness and queerness and because it’s more emotional and abstract. I think that is more relevant.”

On being a spokesperson for trans people:

“I don’t think I should be a spokesperson for any community! But, as far as the individual and emotional, nothing gets me more than having a moment with another T girl. I’m like… [she emits a long squeak]. There is a wavelength that is special and important. Whenever I see another T girl or a pair of lesbians, I’m like, ‘Yes!’ It’s a good feeling to know that you are not singular.” 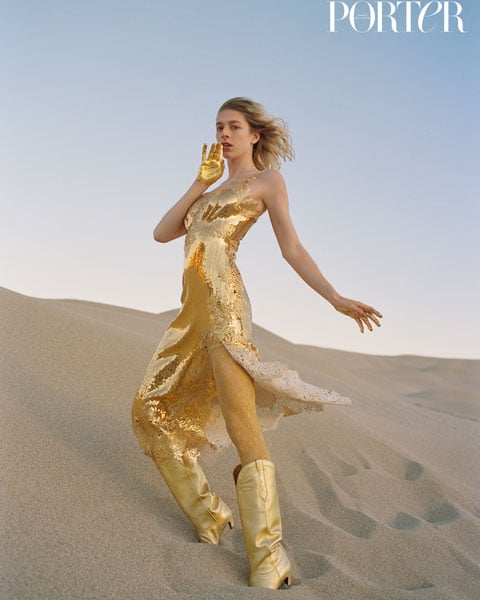 On allowing herself to be vulnerable and emotional on set:

“All of those experiences have taught me so much, even if they were terrifying. But it’s good to get out of your comfort zone. It blows my mind that I got paid to try acting. Just to give it a shot. They took a chance on me.”

On becoming a global ambassador for Shiseido:

“I think they have such a cool take on being artistic with the way you apply makeup. I don’t often wear a lot of makeup but when I do, I like to have fun with it.”

On how she dealt with lockdown:

“It’s been an interesting year for mental health. Everyone’s been forced to sit with themselves and confront a lot of stuff. Personally, that’s not something I’ve ever done before and this year really forced me to do that. That was really the bulk of my quarantine journey, confronting stuff and using work as a pretty large coping mechanism.”

On where her career will take her next:

“I don’t know where I will go next! We are supposed to start filming season two, which makes me happy. Ever since Euphoria, it’s been go, go, go. I’ve been trying to make it be stable, [to] have a career. I want to keep writing and working on my own practices, but other than that it feels very up in the air. I genuinely don’t know what’s going on. You feel like you should be doing something or being productive and sometimes… you know, it’s important just to let yourself exist.”

PREVIOUS
Watch the trailer for the latest queer period film, 'The World to Come'
NEXT
The Australian 2021 census will finally include a non-binary option