"This season was very much looking back at the past and what I've done over the last decade." Christopher Esber of his eponymous brand tells me a few minutes before his Resort 22 runway show, and the second-final show on the AAFW schedule, commences. "I wanted to breathe new life into the next decade. So we had this whole idea of reflection." He says.

After celebrating the milestone of a decade of the brand last year, Esber's intention of reflection was certainly fulfilled once models moved onto the runway - an expertly designed set of delicately raked stones, bonsai trees, and incense, floating into the air to create a complete sensory experience, something that has always been important to the designer.

"The things that come to mind are zen gardens, so I wanted to take that idea and dissect it and look at what I could pull from it into the collection. We worked with a really amazing zen garden specialist, Fumio Ueda, to create the space and everything for the set was locally sourced in New South Wales."

He has always been a man of few words when it concerns himself, but it is moments like this when a decade of work, of quietly honing one's craft and focussing solely on the clothing and how they are intended to be perceived, truly pays off. 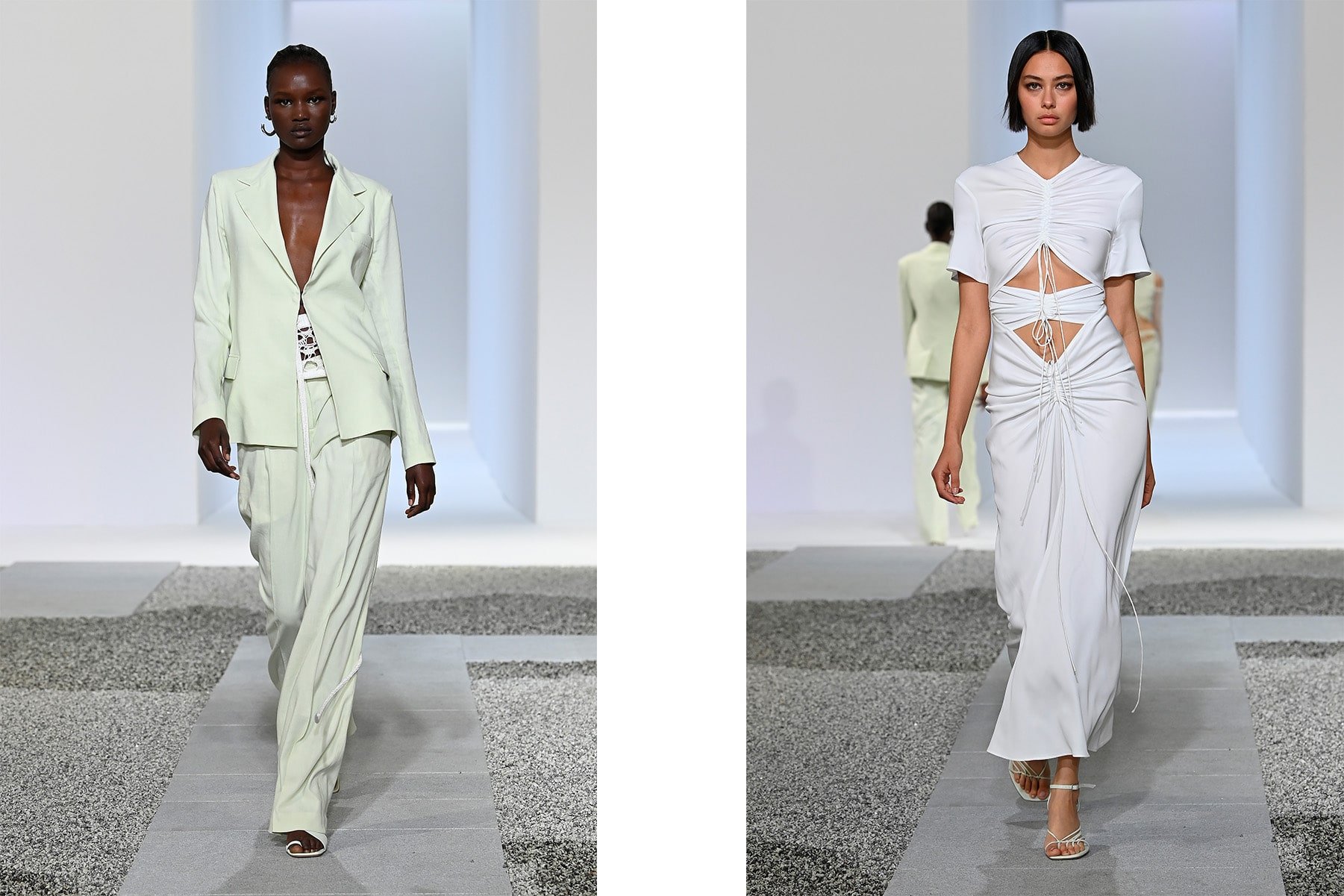 For Esber, the moment of reflection comes with a new breath of life for the clothing he is celebrated for in a cult-like fashion. For the guests and onlookers, it was much more than that. It was a moment where, after a week of countless shows, Esber's collection stood out like a faultless display of thoughtfulness. It was warm, sparkly, calm, energetic - a microdose of mushrooms, if you will, encapsulated into a collection. A moment for us all to feel truly proud of the world Esber has created.

He opened with a chalky mint green, a whisper of color that set the tone for the collection, rendered into the expertly tailored suiting he is known for and transferred onto his signature woven dresses with sinewy straps. Then came crisp whites. New iterations of knitwear with strategically placed holes were a refreshing adjustment to the disconnect silhouettes we all own at least one piece of; followed by cocoon-like cotton with ruched, wire-like caging. We saw the return of the famed crystal rope, alongside a chainmail-esque top constructed out of what can only be described as droplet-shaped mood rings. 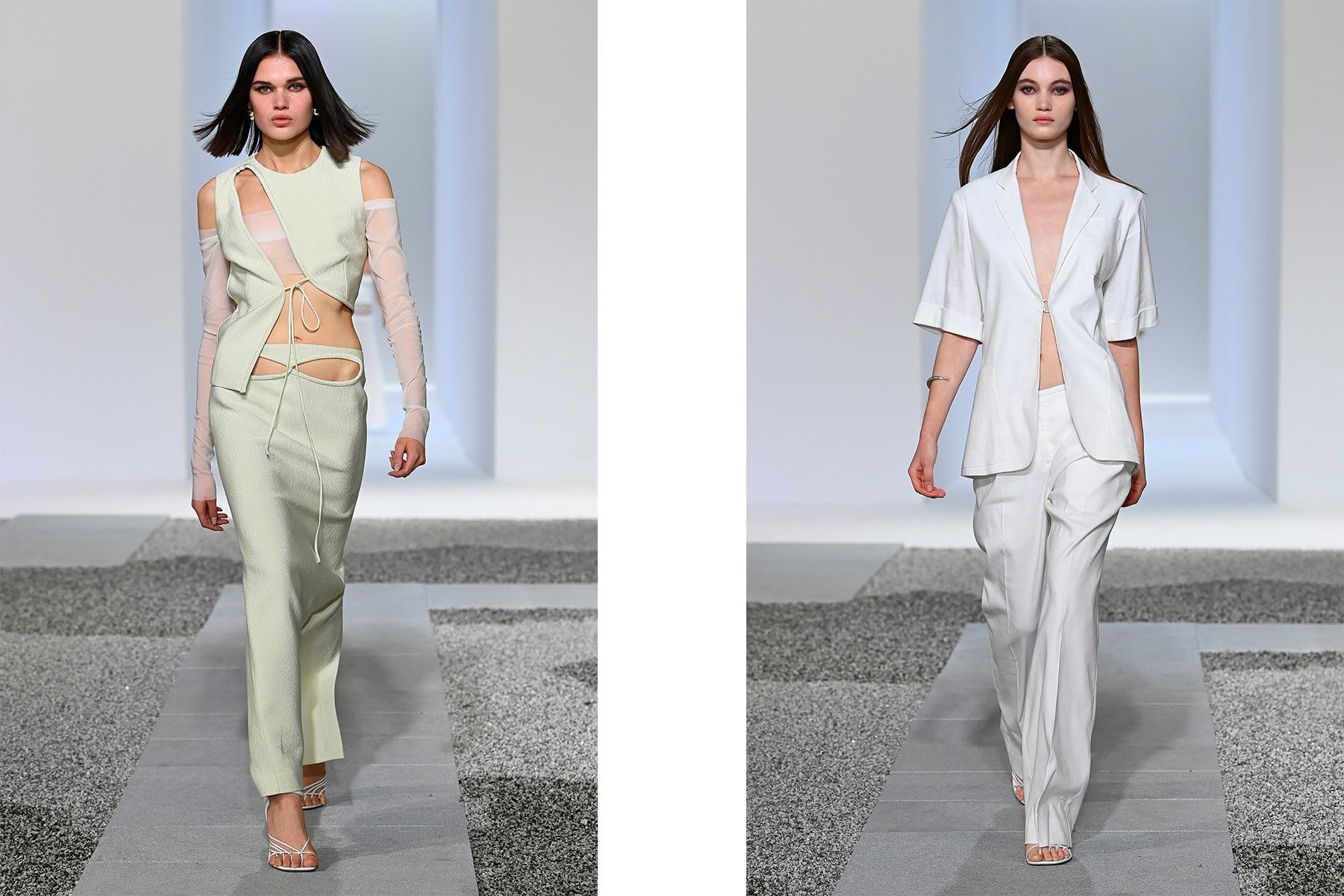 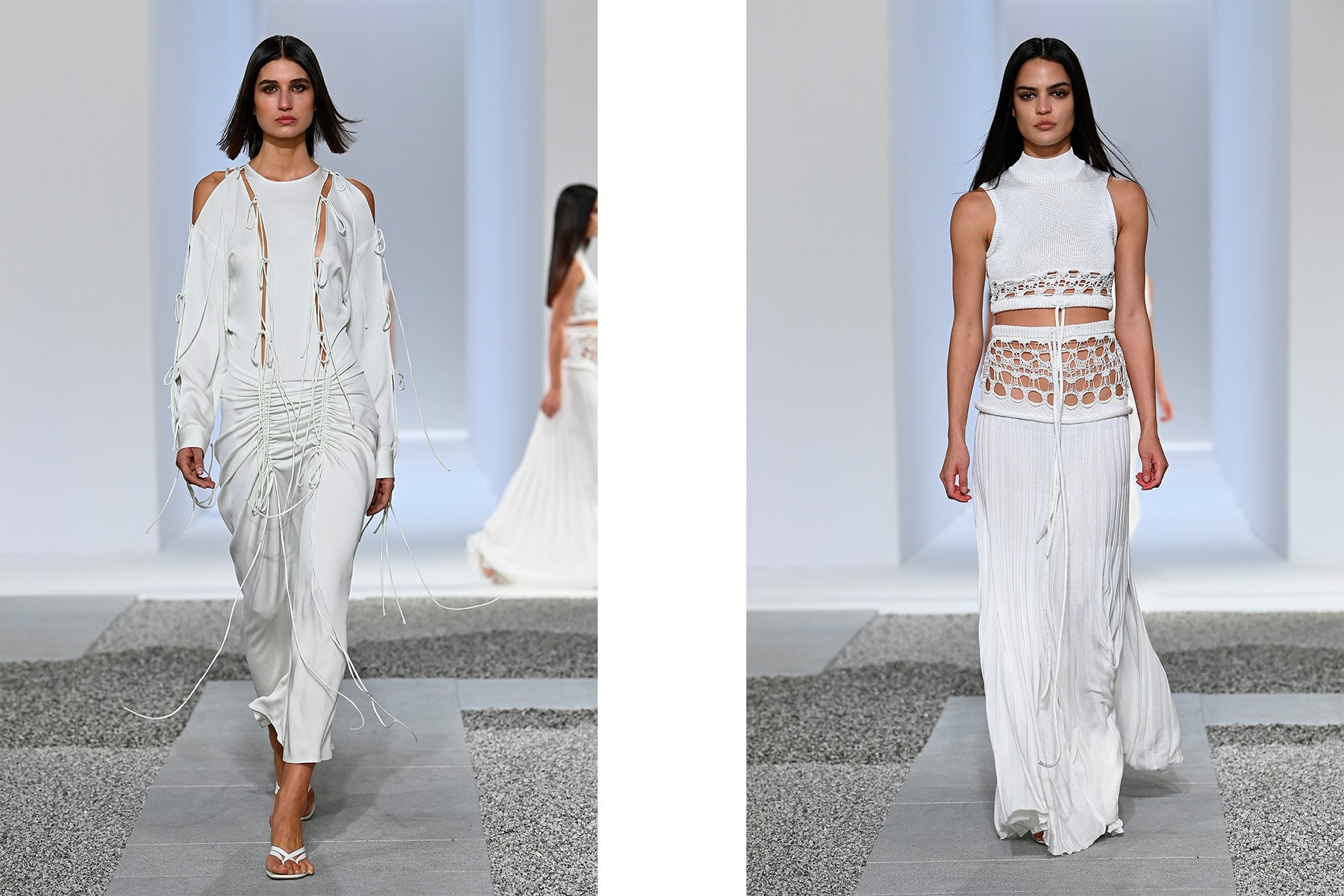 We have always known Christopher Esber can make a great dress, but what Resort 22 proved, undeniably, is that there is very little - if anything - that the designer can't execute. It was proven in the shimmery, sequin cut-out slip dresses where nakedness took on a new meaning, and again in the thoughtful placement of leather details and considered cut-outs, where negative space conveying fluid form. It was grounded in what we have always known as a really good suit, and again in the traditional Shibori pleating which was embellished with crystals, and at times wrapped and tied through technical cotton. 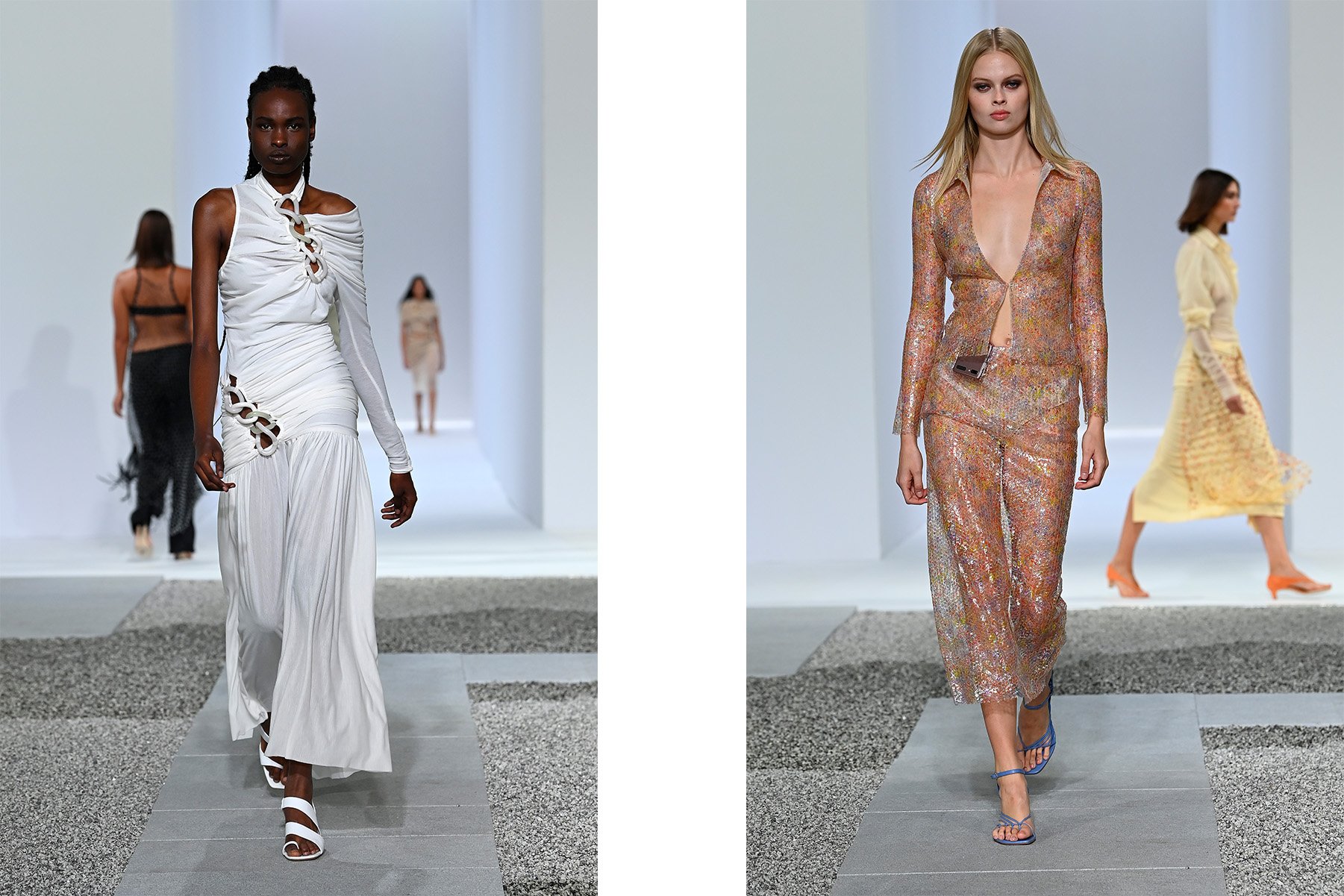 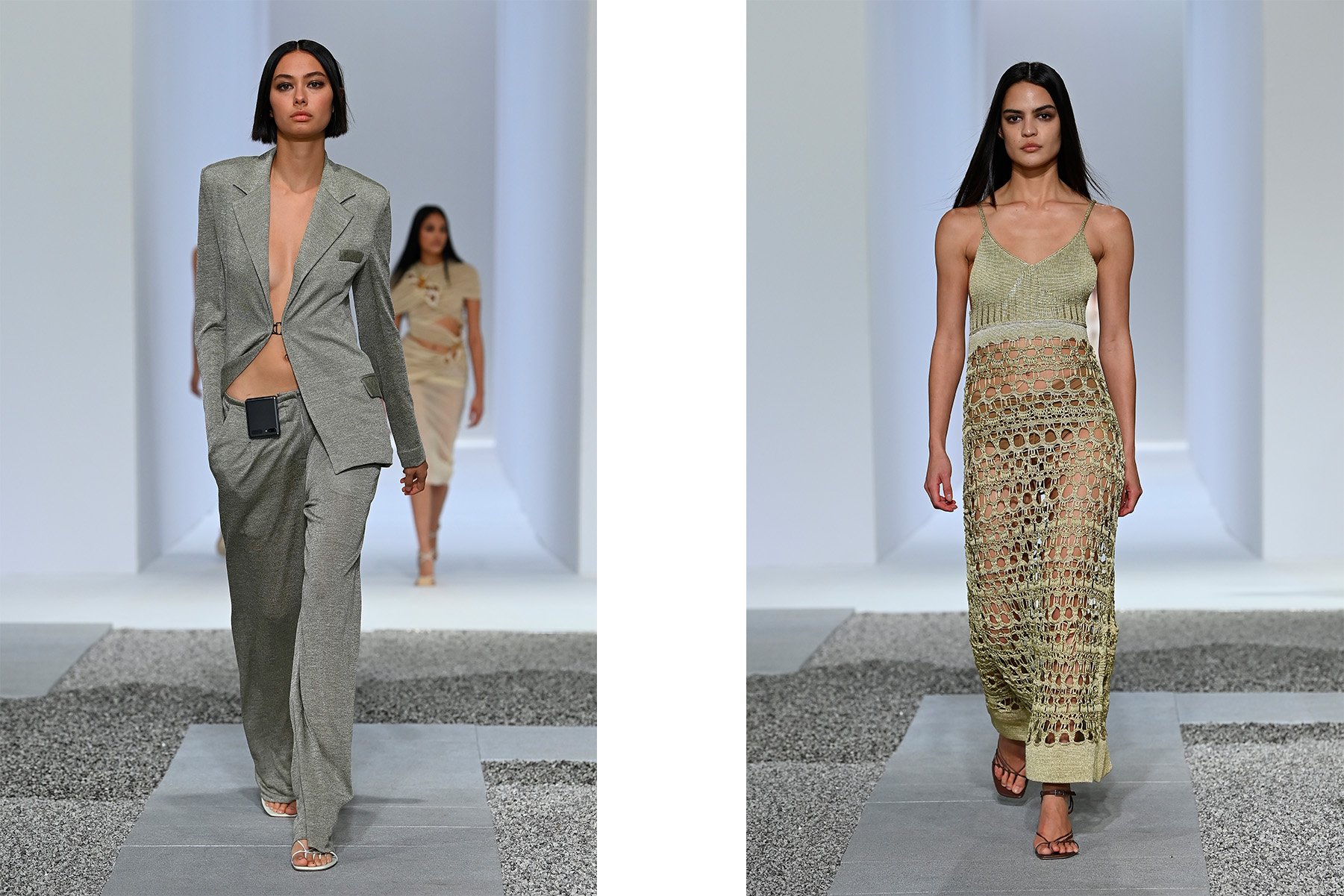 For his last Resort show, it was the soundtrack of Madonna's Holiday. This season, Edwyn Collins' A Girl Like You. One could safely point out that following a finale lead by Gemma Ward - if you didn't already - we all want to be Christopher Esber's girl. 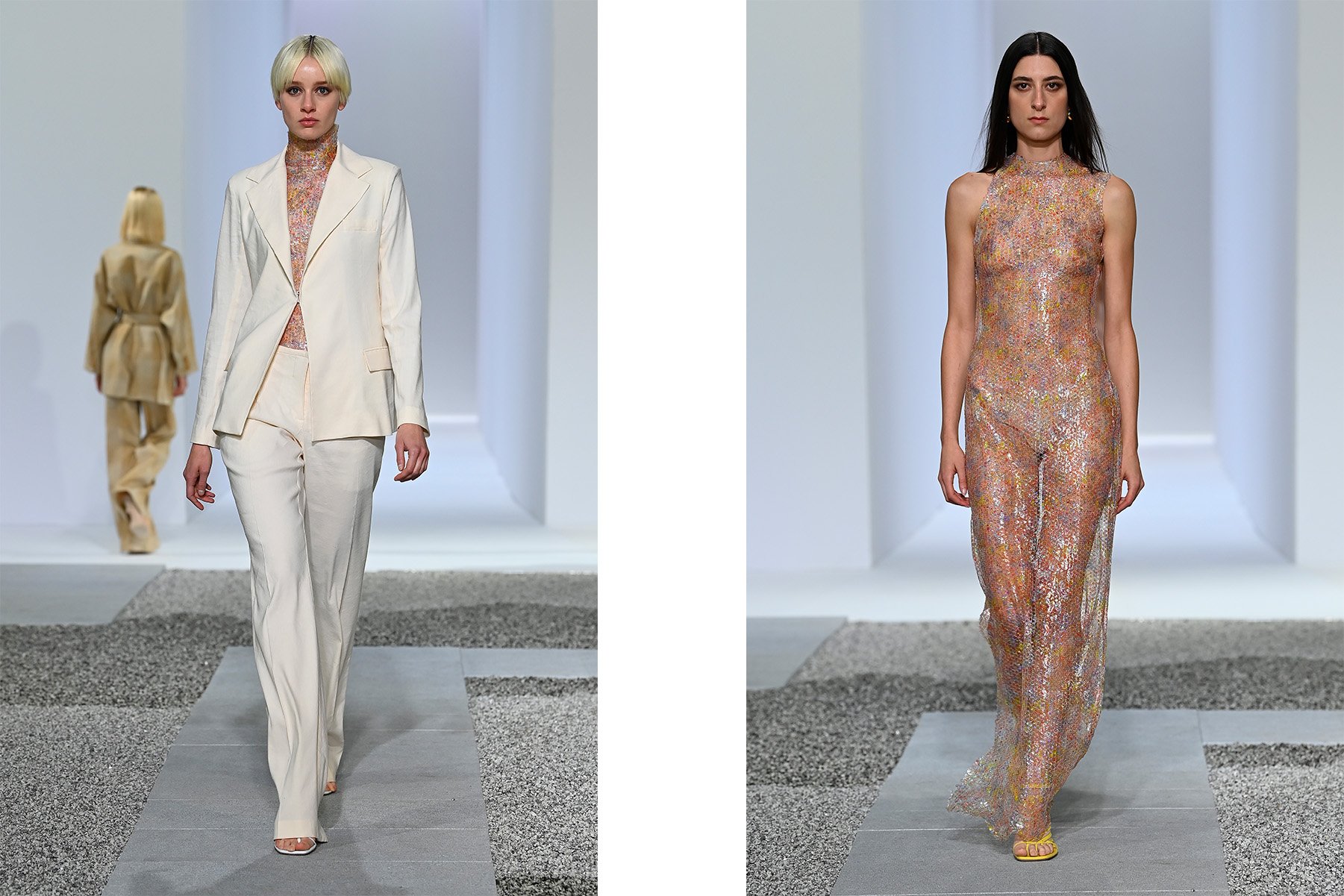 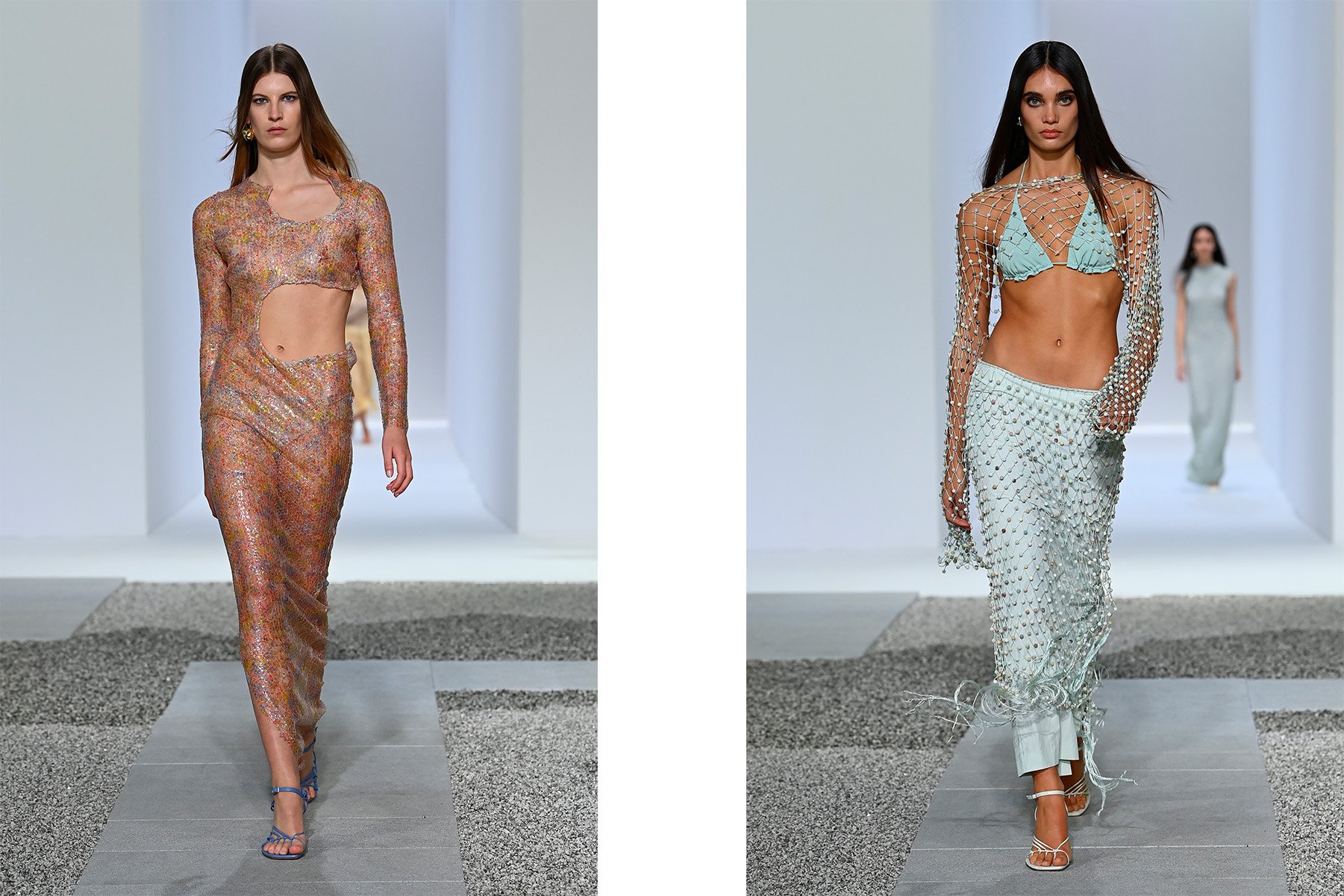 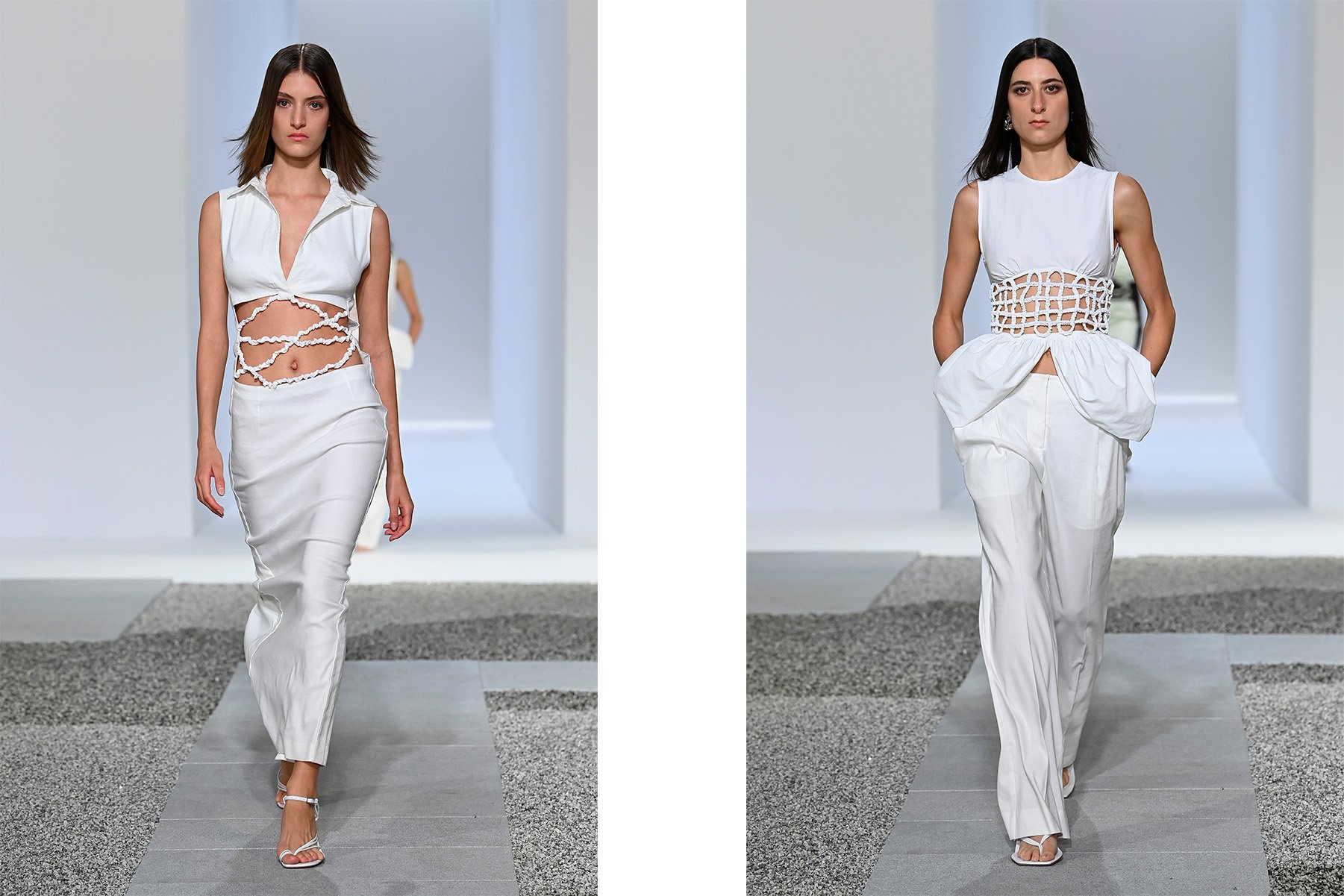 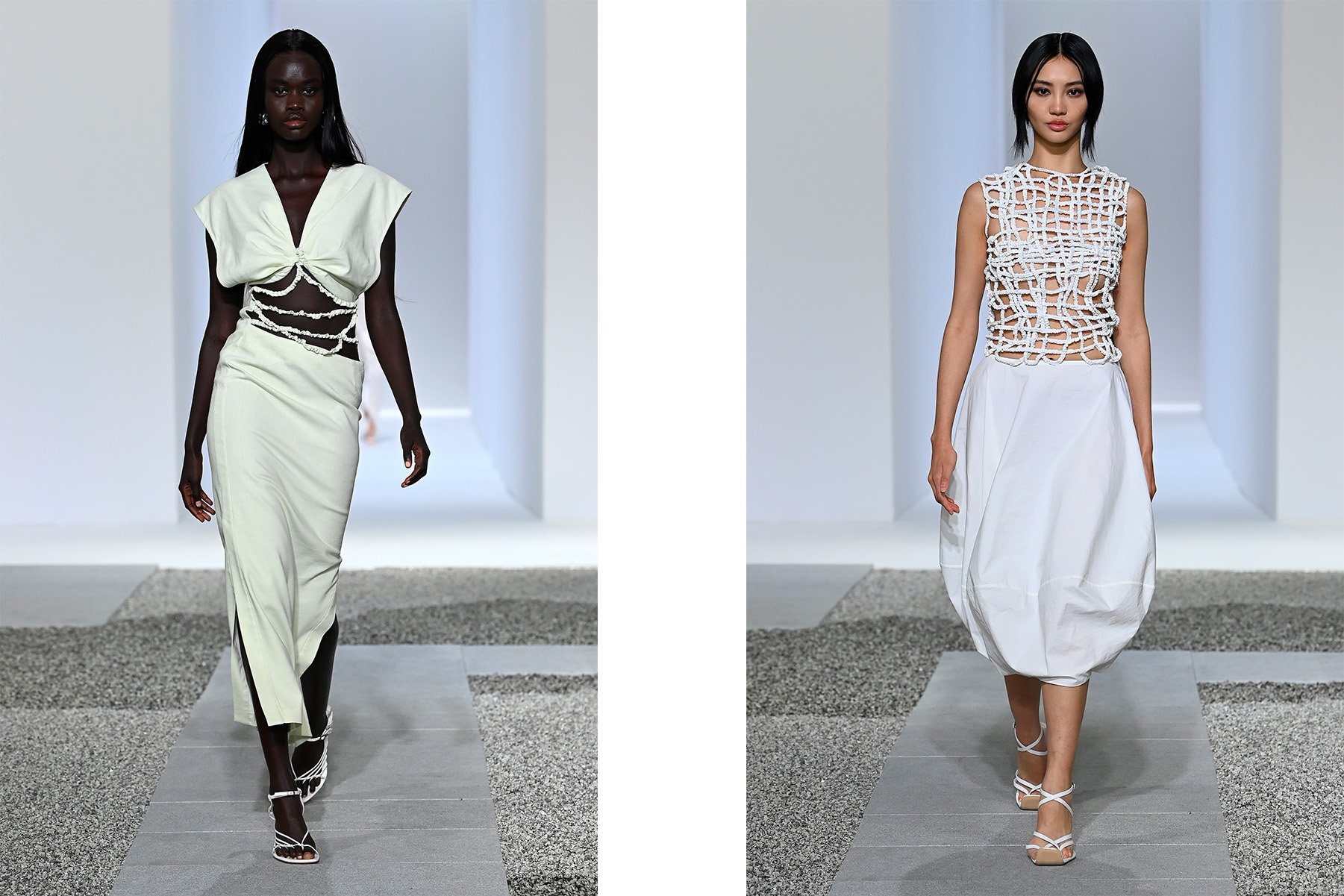 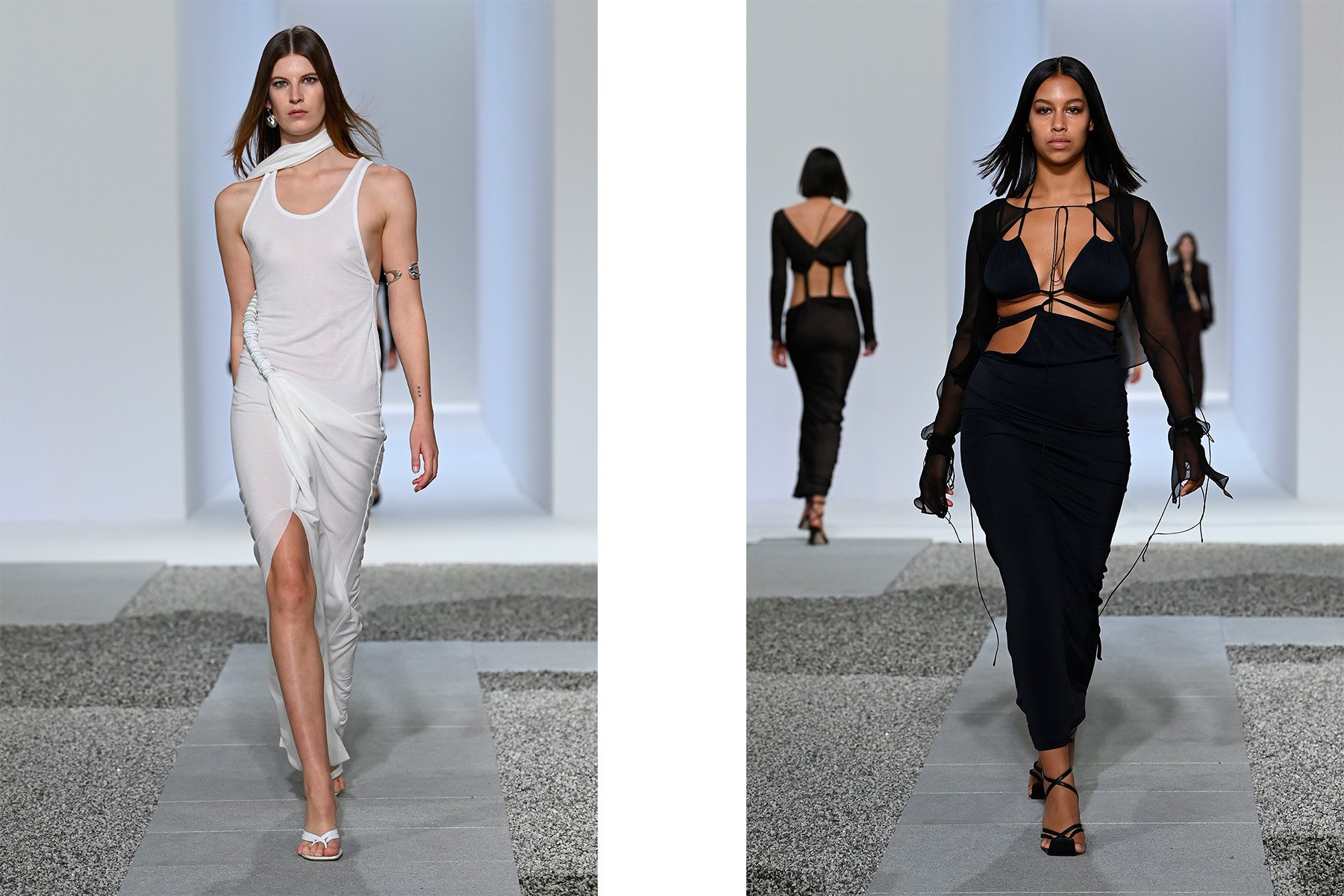 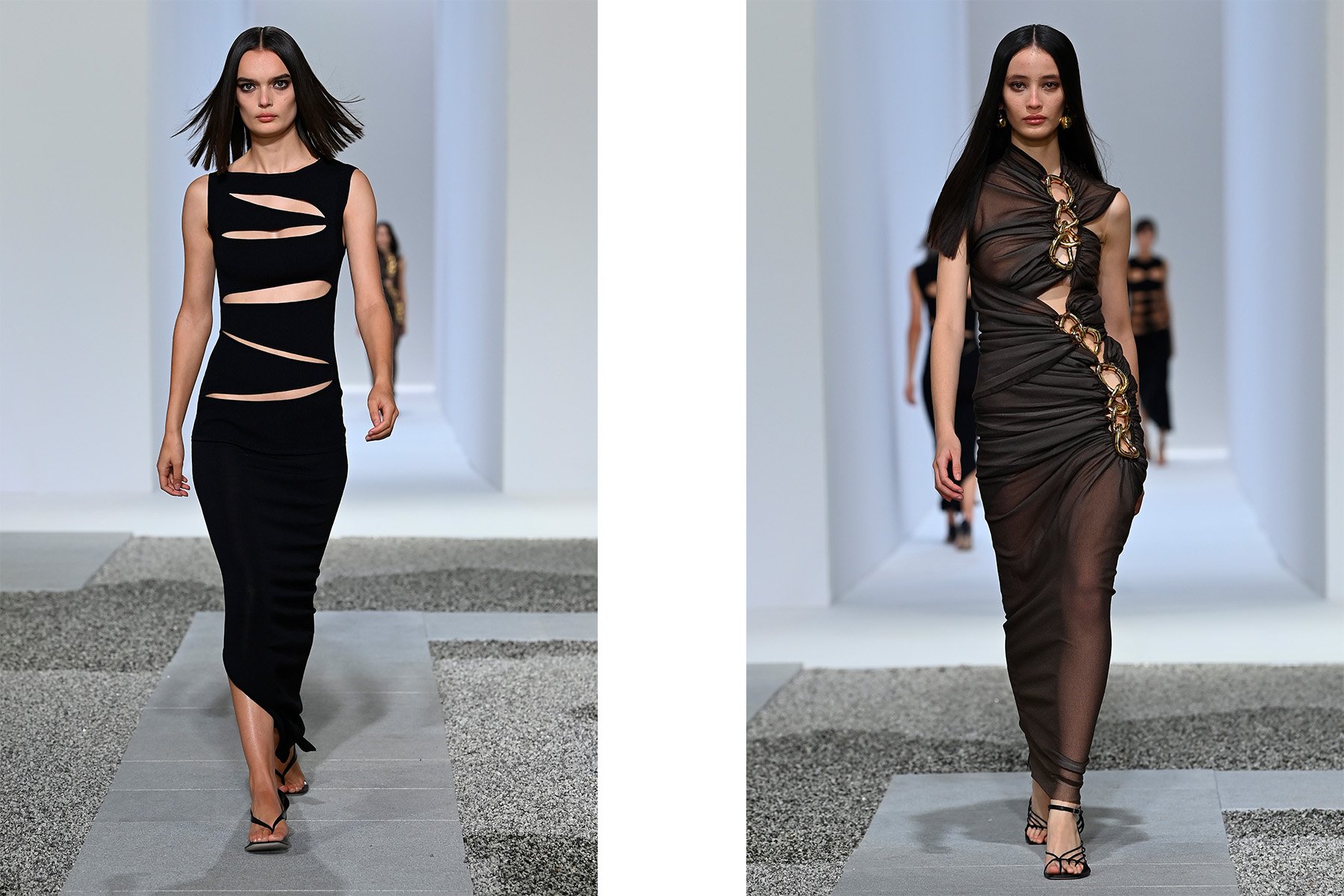 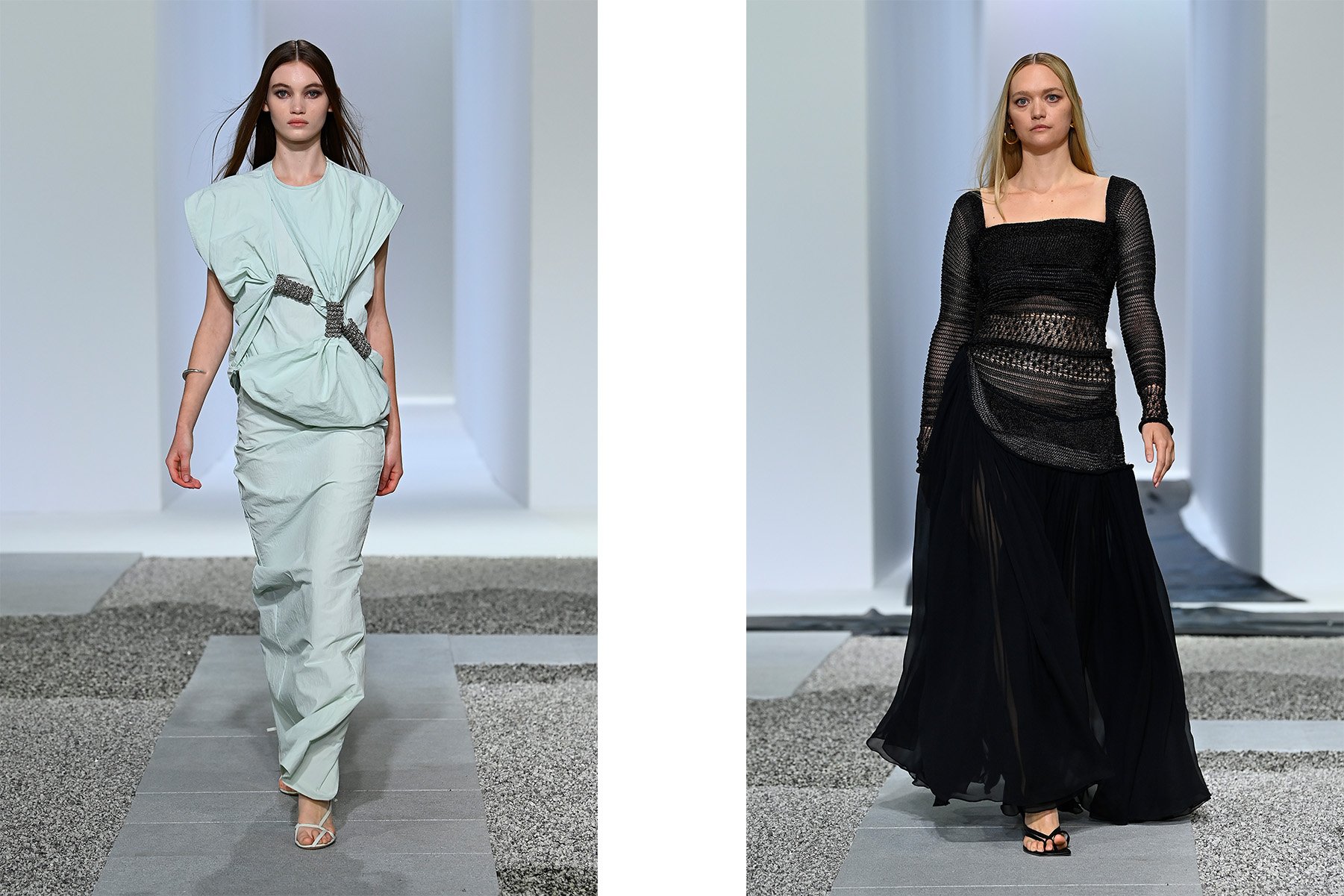 PREVIOUS
St Agni's AAFW 2021 show, Resort 22 was inspired by the French Riviera
NEXT
Australian Fashion Week 2021: the top trends as seen from the runway