There's no business like show business. With the 94th Oscars approaching, we find ourselves reaching the crescendo of Awards Season. Hollywood's biggest night is almost upon us good folks and it's time to reward the labour of those who have devoted entire careers to the silver screen. But as much as we've enjoyed feasting on films like House of Gucci and Licorice Pizza in the past year, we can't help but feel that the best drama happens on the Dolby Theatre stage. From Hattie McDaniel's historic win to Cuba Gooding Jnr's emotional speech, this is the stuff films are made of. That's why below were bringing you 11 of the most memorable moments in the history of the Academy Awards. Find them below.

1. Hattie McDaniel is the first Black person to be awarded an Oscar (1940) 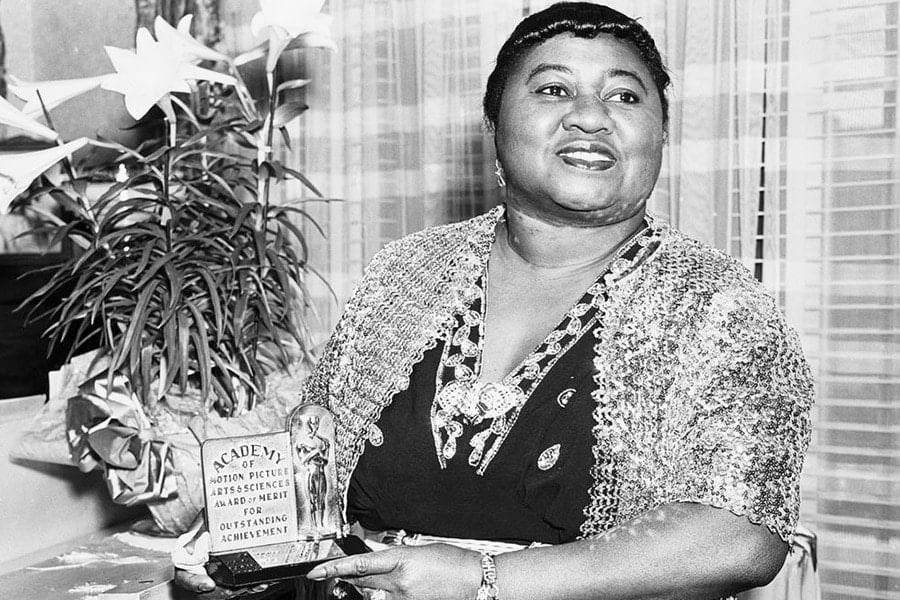 The Oscars had been running for eleven years handing over little gold men to life-sized white men by the time Hattie McDaniel received her Academy Award for Best Supporting Actress. She was the first Black actor to ever take home an Oscar, recognised for her work as Mammy in Gone With the Wind. But still that didn't shield her from the onslaught of racism and segregation—despite her win she had to sit at the back of the theatre, separate from the rest of the cast. It would also take another fifty years and Whoopi Goldberg until a Black actor would win again.

When Marlon Brando won Best Actor for his role in The Godfather, he refused to attend. Instead he enlisted the help of Apache and Yaqui activist Sacheen Littlefeather to decline the Oscar on his behalf, citing "the treatment of American Indians today by the film industry" as the reason behind his decision. Littlefeather delivered her speech with grace despite the eruption of a mixture of boos and applause, and John Wayne's menacing presence in the wings of the stage. 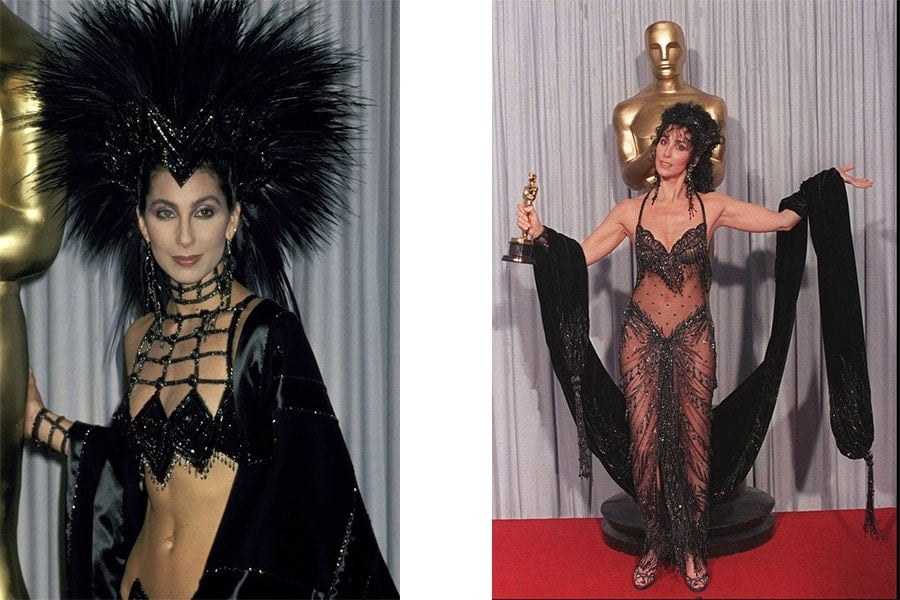 After being snubbed by the Academy for her role in Mask, Cher turned up to the 1986 Oscars with little else but vengeance on her mind. The Academy deemed her "not serious" and had subsequently overlooked her. So what else was there to do but arrive at the festivities in a Bob Mackie headdress and gown so flamboyant the Academy couldn't not notice her? Feeling that her antics would have harmed her following chances at winning, Cher was pleasantly surprised when in 1988 she won Best Actress for her work in Moonstruck. She celebrated by wearing another standout Bob Mackie gown, of course.

4. Cuba Gooding Jr. is overcome with emotion in his acceptance speech (1997)

When Cuba Gooding Jnr. won Best Supporting Actress for his part in Jerry Maguire his speech seemed like just another chain of thank yous and honorary mentions. That is, until the orchestra began to play, a universal signal to wrap it up. What did Cuba do? Rather than take a hint, the music gave him more steam. He was swept up in the moment, shouting "I love you" to everyone from Tom Cruise to the Academy, to the audience more broadly. The music became an emotional backing track to his impassioned speech and he received a standing ovation. No speech in the years since has held a candle to this. 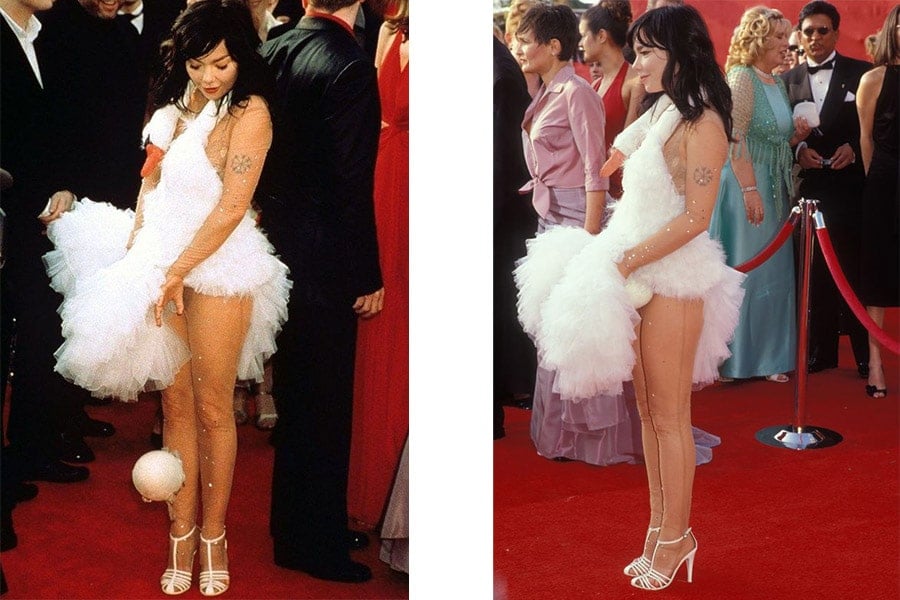 We can always count on Björk to rouse our crusty spirits come Awards Season (we still haven't gotten over "I am grateful grapefruit"). And she served up a truly memorable moment on the 2001 Oscars red carpet when she came dressed as a luminous white swan. The dress, a brainwave of Macedonian designer Marjan Pejoski, came equipped with a matching swan egg, which the musician cheekily dropped as she posed for the paparazzi.

Another stirring speech. Halle Berry's historic win as the first Black woman to be awarded Best Actress moved us all to tears. "This moment is so much bigger than me," she said. "This moment is for Dorothy Dandridge, Lena Horne, Diahann Carroll. It's for the women that stand beside me, Jada Pinkett, Angela Bassett, Vivica Fox. And it's for every nameless, faceless woman of color that now has a chance because this door tonight has been opened." However, despite her wishes there hasn't been another Black woman to take home this category in the twenty years since.

7. Heath Ledger is honoured with a posthumous Oscar (2009)

Our hearts collectively broke when Heath Ledger passed away in 2008. Seven months later, his swan song was screened to the world and he was nominated for Best Supporting Actor. Naturally, he took the title out and his family came to collect the statuette on behalf of his three-year-old daughter Matilda.

If only Bradley's arm was longer. Best photo ever. #oscars pic.twitter.com/C9U5NOtGap

If you don't recall Ellen DeGeneres' iconic Oscar selfie, then maybe you'll remember the zillion memes that spurted out of it. In just over an hour, the snap which included heavyweights like Meryl Streep, Julia Roberts, Brad Pitt, Angelina Jolie, Lupita Nyong'o and Jennifer Lawrence, became the most retweeted photo in Twitter history. Talk about viral.

#OscarsSoWhite they asked to touch my hair. 😒

After yet another all white Oscar season, April Reign took to Twitter to vent her frustrations. What began as a simple tweet #OscarsSoWhite, grew momentum and morphed into a fully fledged movement that saw concerns about a lack of diversity in Hollywood spill over into the mainstream. It also sparked a conversation about the systemic changes that need to be made inside the Academy, so that inherent bias is so longer a determinant of who is nominated or included in the ceremony.

For a while there it really seemed like our pal Leo couldn't catch a break. After being nominated for Best Actor in The Aviator, Blood Diamond, The Wolf of Wall Street and Supporting Actor in What's Eating Gilbert Grape it was his work on The Revenant that finally saw him snatch up a golden statuette. It's about time, was all we could say.

11. Emma Stone calls out gender inequality in the category for Best Director (2018)

Another allegation often levelled at The Academy is the gender inequality that exists in the Best Director category. In 94 years, only seven female directors have been nominated for the award, and more to the point just two have won—the most recent being Chloe Zhao for Nomadland. In 2016, Emma Stone approached this tidbit when reading out the winner in the category for that year's ceremony. Guillermo Del Toro took home the award, but not before Stone quipped about "Greta Gerwig and the other four male nominees".

Wondering who has been nominated for the 2022 Oscars? Take a peek at our handy lil' guide. Otherwise, here's a rundown of the night, from who's hosting to the scheduled date.