When bella amor materialises before me on Zoom, I'm struck by the spark inked into the centre of her chest. All eight of the finely drawn spokes poke out from beneath her thrifted Y2K-striped shirt. "I'm very spiritual," the 19-year-old musician tells me from her family home in Brisbane. "I'm really into the chakras and this tattoo is between my throat and my heart chakra," she explains. "For me they're so blended, because I use my voice. I sing on a daily basis and generally talk about how I feel. So it's a reminder to always be present and always use them two together, if that makes sense."

Even down the barrel of a pixelated laptop camera, it's easy to see how aligned the symbol is with bella amor's disposition. I ask her what the first thing we should know about her is, and immediately she shoots back: "that I'll be honest".

She's deliciously candid and unfiltered, and it clearly works in her favour. During lockdown, amor downloaded TikTok with the intention to not take it so seriously. Her videos, which she describes as clips of herself just being "stupid" found their target audience, and in the years since she's amassed a staggering following of almost 65,000 people. Soon after she began experimenting by singing on the platform, and it wasn't long before a rep from Sony slid into her Instagram DMs asking to arrange a meeting.

amor's debut single, entitled "can't get laid" is an extension of her signature brand of candour – although she chalks it up to being a Scorpio. The song, she tells me, came about as the relationship with her first love was coming to an end. Heartbreak was followed up with Covid-19 and she couldn't help but think, with everything going on in the world what was the point of "suffering for all this stuff that is out of our control if we can't even have good sex." Throw in a clever progression by Xavier Dunn and "can't get laid", with its catchy chorus and much-needed catharsis, has legs. 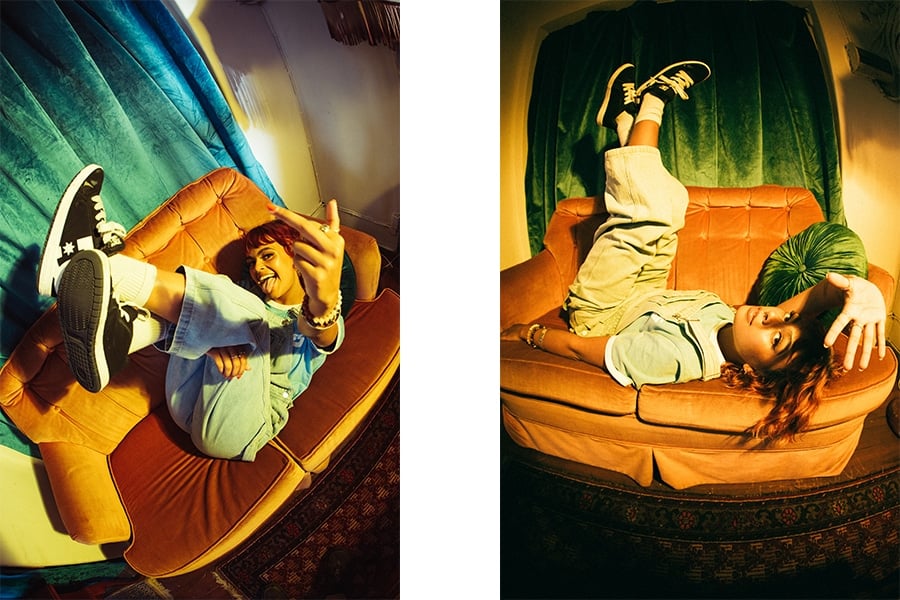 "Obviously with the song being called "can't get laid", I was a little bit worried about my grandparents and what they would think," she jokes. It turns out they were thrilled. Her grandmother wears leopard print after all. In reality, they expected nothing less. Her mum was an opera singer, and later became a vocal coach at her high school. She distinctly remembers her dad listening to music before his football games to hype him up too. It's safe to say, music has always been there.

All in all, they've all been very encouraging. Early on, her family would ask for permission to post videos of her singing to Facebook, and from this habit she would upload her own, sometimes of her covering Missy Higgins in her bedroom.

She wrote her first song when she was 12. It was about a boy in her school who she had a crush on and "it was yuck." Meanwhile, lunchtimes were spent solo in the school music rooms and with the help of a teacher who was also a producer, she released her first EP before she'd even graduated. Despite all of this, amor shares how she "never really thought it [music] would be the main part of my life, because it very much is. But I'm so grateful that it is".

More recently, amor came across a video on her mum's old computer of her age eight or nine, singing a song about winning a game of mini golf. In the footage she's berating her younger brother for not filming all her angles. It's this fiery self-possession that has stayed with the singer. Her retelling of the story is hilarious and more than anything, serves as further proof that she was always destined for a career in music.

"Music is such a personal thing. It's just my mind in a song. My thoughts in a melody," amor explains. "It is kind of like therapy for me in a way. But at the same time with songs like "can't get laid" it's super fun."

"All I ever want to do is just give a voice to my feelings, other people's feelings and people who feel like they can't say anything. You know what I mean? I just I want to be that microphone."

In between skating and working at her mum's nail salon, amor now has the freedom to write whenever she likes. No longer is musician some abstract concept, it's actually her professional title. At last, she feels like she's finally found her people too.

"That was a really big issue for me. Obviously, I have my good mates. But ages ago, I never felt like I had a crowd or a place. But just being in the music scene and doing this professionally, it's really helped that and it's kind of made me think about my life and what I want, and I want to be doing shit like that. So I think just knowing that I actually am quite literally living out my dream so early on is so crazy."

I ask about the cover art of "can't get laid" which features two Kewpie dolls, one rosy-faced and angelic and the other sneering devilishly. It was dreamt up by the same artist that tattooed her chest. If you hadn't clocked it from her decorated body, amor just really "fucking loves tattoos". Is she going to mark her single launch with a tattoo of the dolls? It's possible – probable, actually.

Although, for now amor is exercising some restraint because she wants to save some real estate for when she's older – or for future albums, perhaps? Which, if she had it her way, would feature dream collaborators like YEBBA, Matt Corby and Adele – the latter of which she muses would be a ballad that would reduce all listeners to a sobbing heap.

Watch the energetic music video to "can't get laid" by bella amor below. Otherwise, you can listen to the track on Spotify, Apple Music or wherever you get your music.