Artists need to create: their vitality and life force depends on it and our world in turn becomes more expansive. Here are some of our most contagious contemporary Australian artists of the moment that you need to watch. 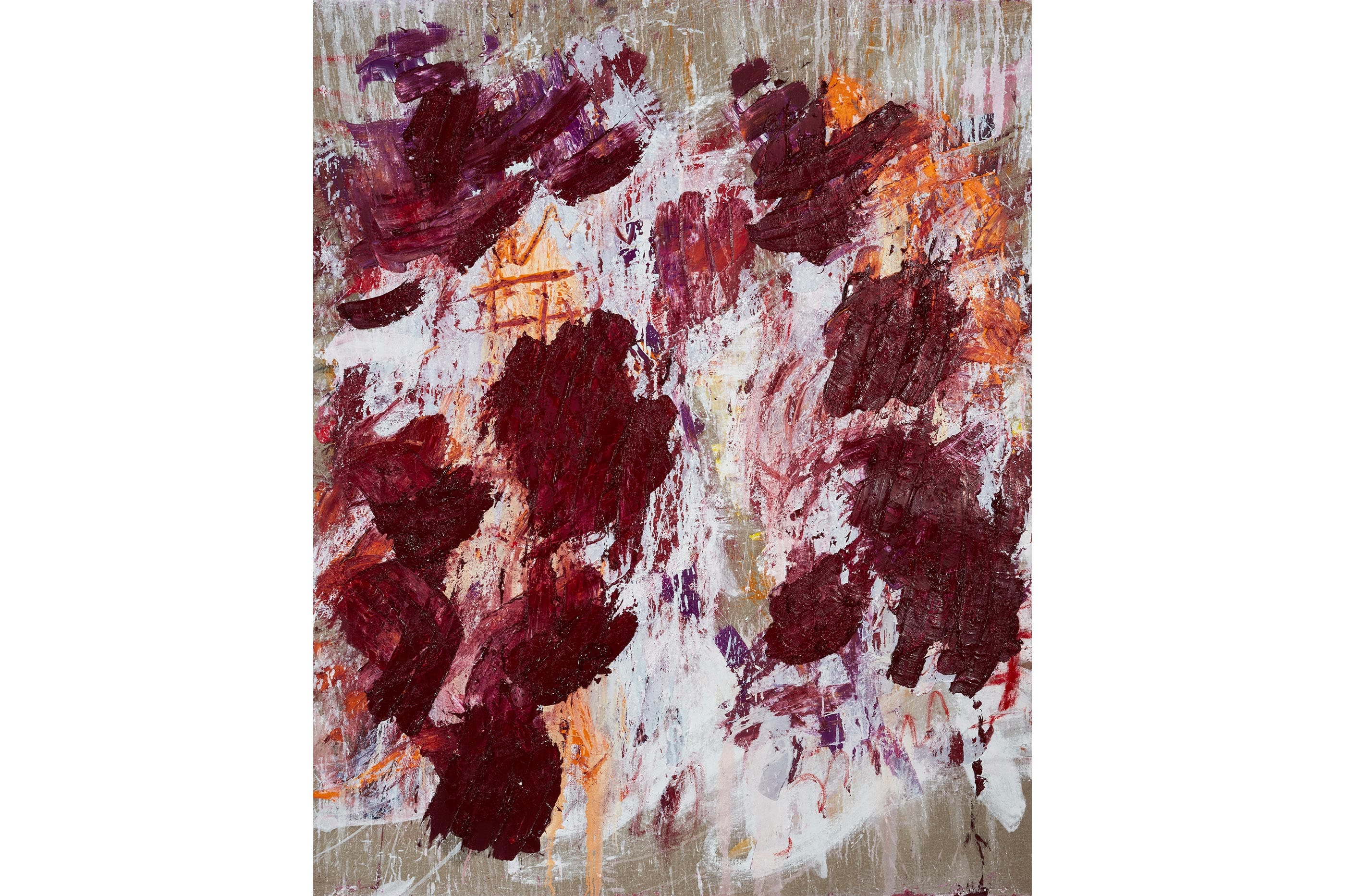 Having developed her own distinct visual language, Aida Tomesu’s works are in a perpetual state of becoming. Born and raised in Romania, she came to Australia as a 23-year-old, a place she says has afforded her a quality of isolation now deemed crucial to her work. One can consider each body of work a new beginning and, while drawing from previous experiences, each is its own entity and ensemble. Tomescu’s interest has always been to “arrive at a unified image… to find a reality which affirms its own existence.” Awash with colour, her work has become increasingly layered over years, and are characterised by a myriad of signifiers including being vigorously abstract, expressionist and radiant. Tomescu’s vast catalogue shows us her work cannot be pinned down to a singular reference point or source of inspiration – it is multitudes, like she is herself. 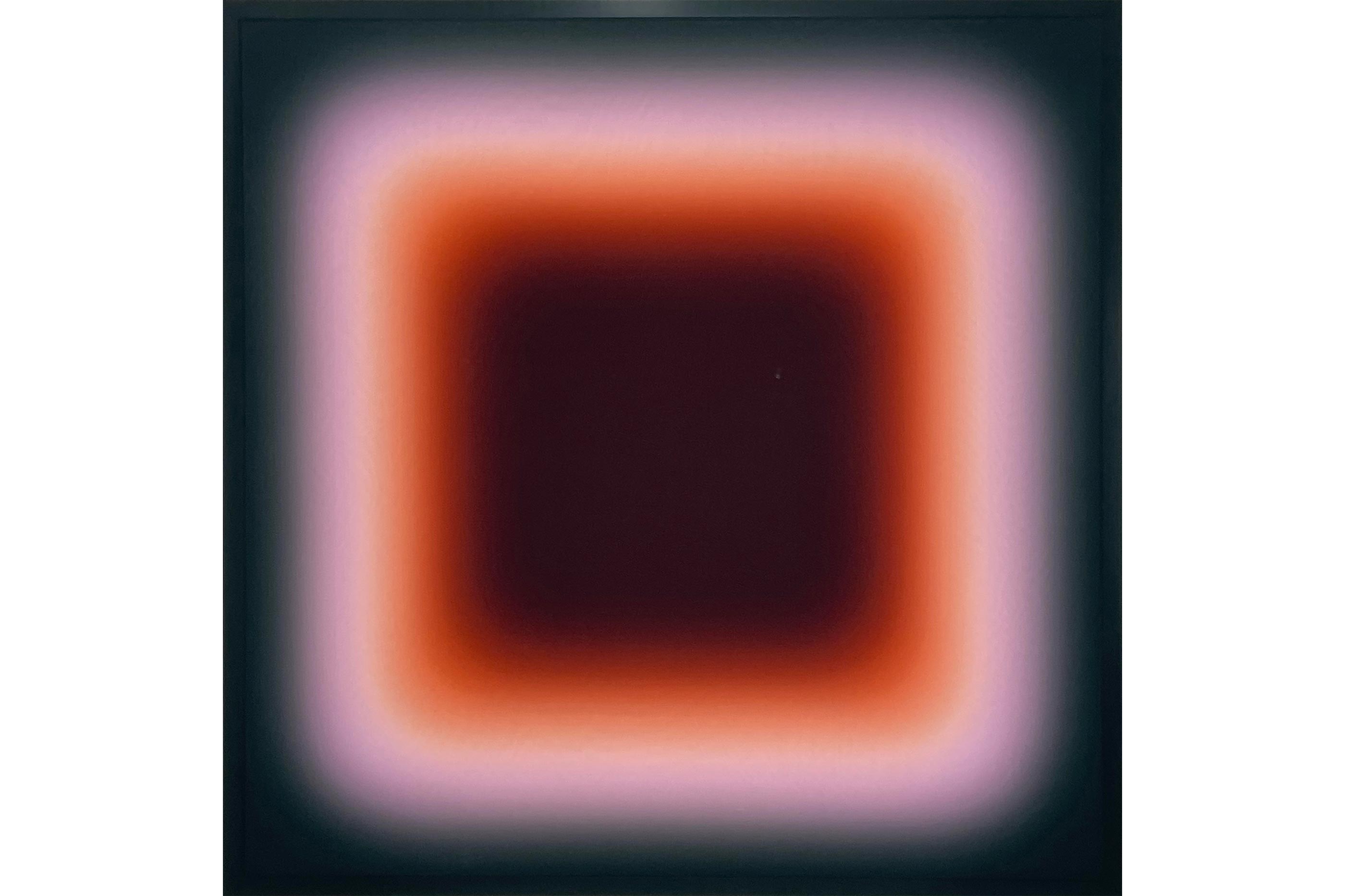 Painting, sculpture, abstraction – Sydney’s Jonny Niesche is a multi-medium artist. Crafting vividly coloured pieces enthralling the viewer in an immersive sensory experience, his paintings are awash with a pigment that seems as though it is sitting above the voile surface. Niesche’s work is often experiential, referencing and intersecting with art history motifs like minimalism and the sublime. By employing mirrors, glitter and reflective metals, he creates pieces that interact with the spaces they are exhibited, chameleoning its colours dependent on the environemt that sometimes enmesh the viewer in the artwork itself through reflection. It is interactive, explores perception and the individual ways we experience space. Glowing neon’s, soft pastels and dark centre’s juxtapose one another, often bordered by gold rims, each piece optimistically charged and challenging the typically accepted constraints of space. Hypnotic minimalism, with hints of 1970s glam rock, Niesche is unpredictable when in the throes of creation and conception. 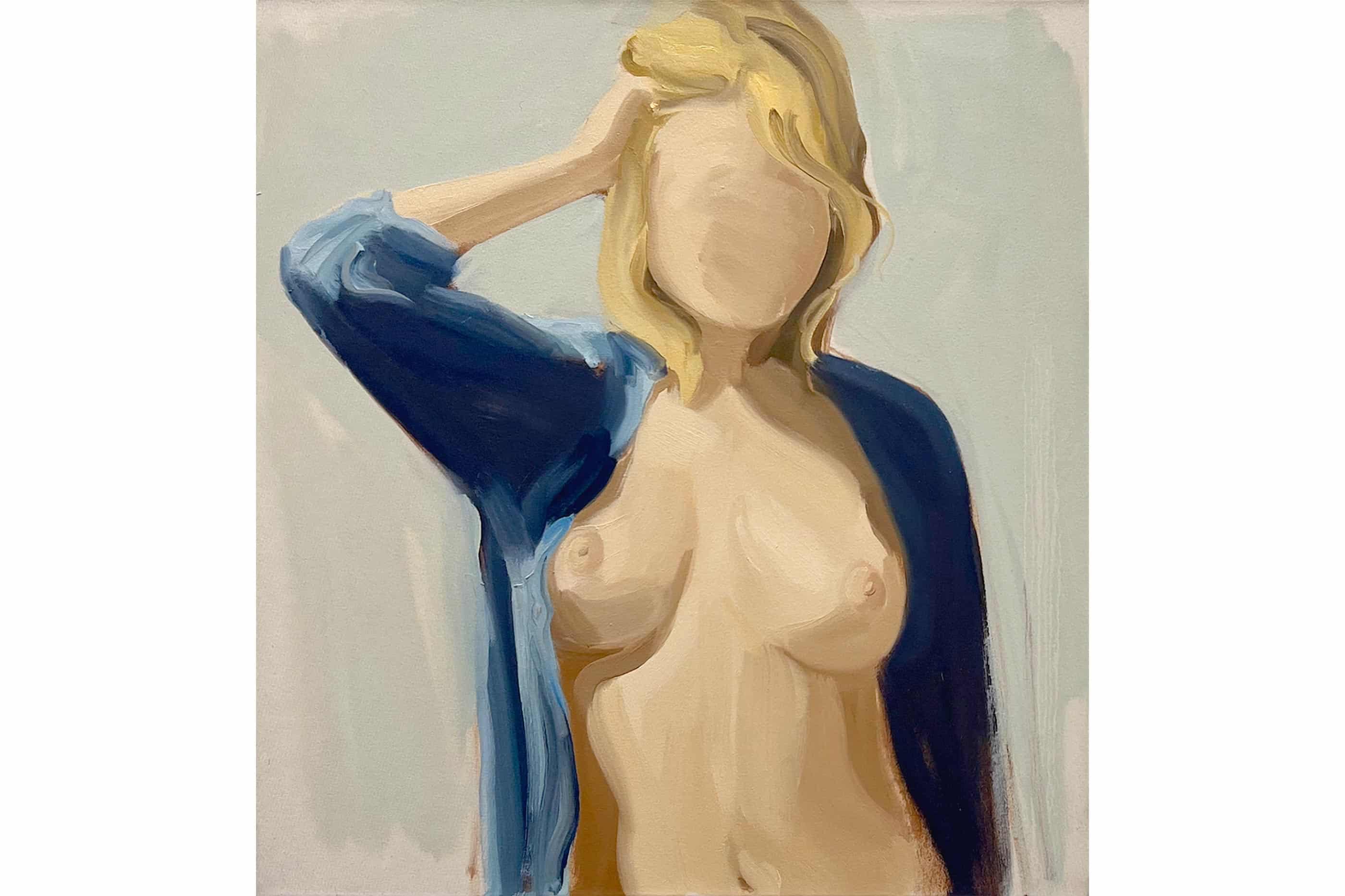 Melancholia and tenderness exude from the works of Gideon Rubin, a painter whose pieces are imbued with feeling. While at times encouraging a conversation about introspection, juxtapositions in his work evoke joy and sensuality, leading his catalogue to be a kaleidoscope of emotions brimming to the top. Rubin bases his works on anonymous photographs from vintage photo albums, gathered from across the world. Having confessed to having trouble “painting from life,” the method is ideal for the artist, allowing him to paint from sources that have a life – that already tell a story. While borrowed from vintage photographs, figures are altered in a way that have become characteristic of his style. Rubin’s palette, rather than relying on colour, focusses on tone, paint applied in thick, broad strokes with it not uncommon for him to build up certain areas and leave others on the canvas blank, each piece taking on its own meaning to be interpreted by the viewer. 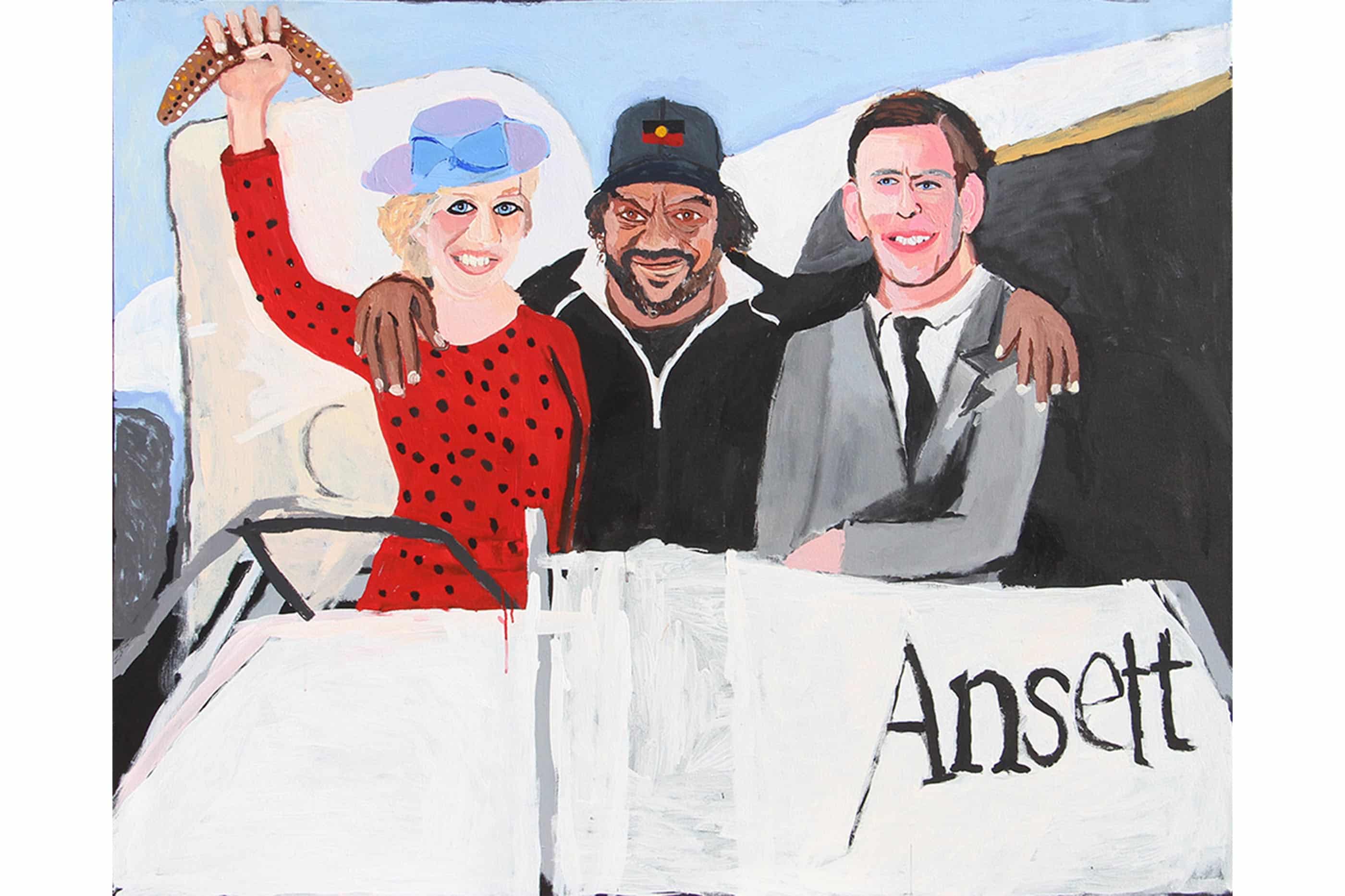 Vincent Namatjira, The Royal Tour (Diana, Vincent and Charles), 2020
Acrylic on linen, 152 × 122cm. Courtesy the artist and THIS IS NO FANTASY.

A subversive portraitist, Vincent Namatjira employs a blend of wit, perception and caricature to explore Australia’s complex colonial history, specifically with ‘The Empire.’ In his work, significant political and societal figures – with both national and international notoriety – are depicted through his gaze, interrogating the discourse between politics and history that is implicit in Australian culture. While painting the likes of the Princess of Wales to Queen Elizabeth II to Adam Goodes, Namatjira also calls on his own personal history, placing himself into the scenes crafted; a juxtaposition of past and present. His work is conceptually rich, bold and recognised across the globe, having been the recipient of the Archibald Prize in 2020. “Art has given me joy, prosperity and it’s given me power also, because with a paint brush you can do anything,” Namatjira has previously said. We are all the luckier for his affinity with the work. 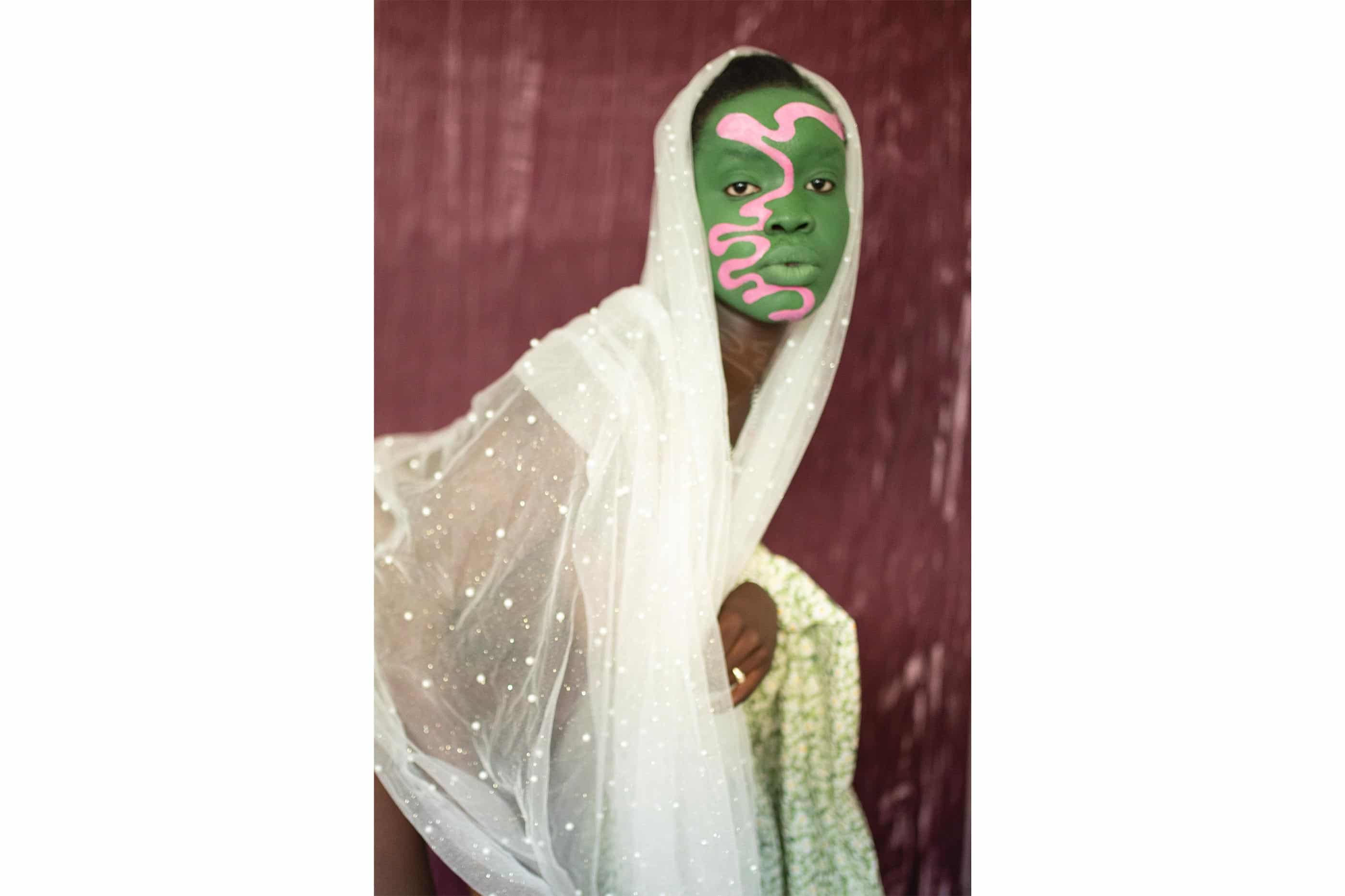 A Melbourne-based, South Sudan-born artist,  Atong Atem is known for her vibrant palette and stylised imagery, drawing viewers into a narrative. Atem has previously stated she has a “really solid” internal image catalogue, alongside a rota of visual languages stemming from her immediate family, elements of South Sudanese Dinka culture and Australian iconography, on which she draws when depicting a scene. It is immersive, captivating and deeply exploratory. There’s an effortlessness inherent to Atem’s work that translates through the subjects and narratives portrayed in the imagery, something she says comes from years of research and trust in her own visual language. Specifically speaking to her Studio Series, those photographed understand her frame of reference and lean into its ethos. Through turning the lens on herself and her community, Atem’s work is a celebration of the African photographers who came before her. 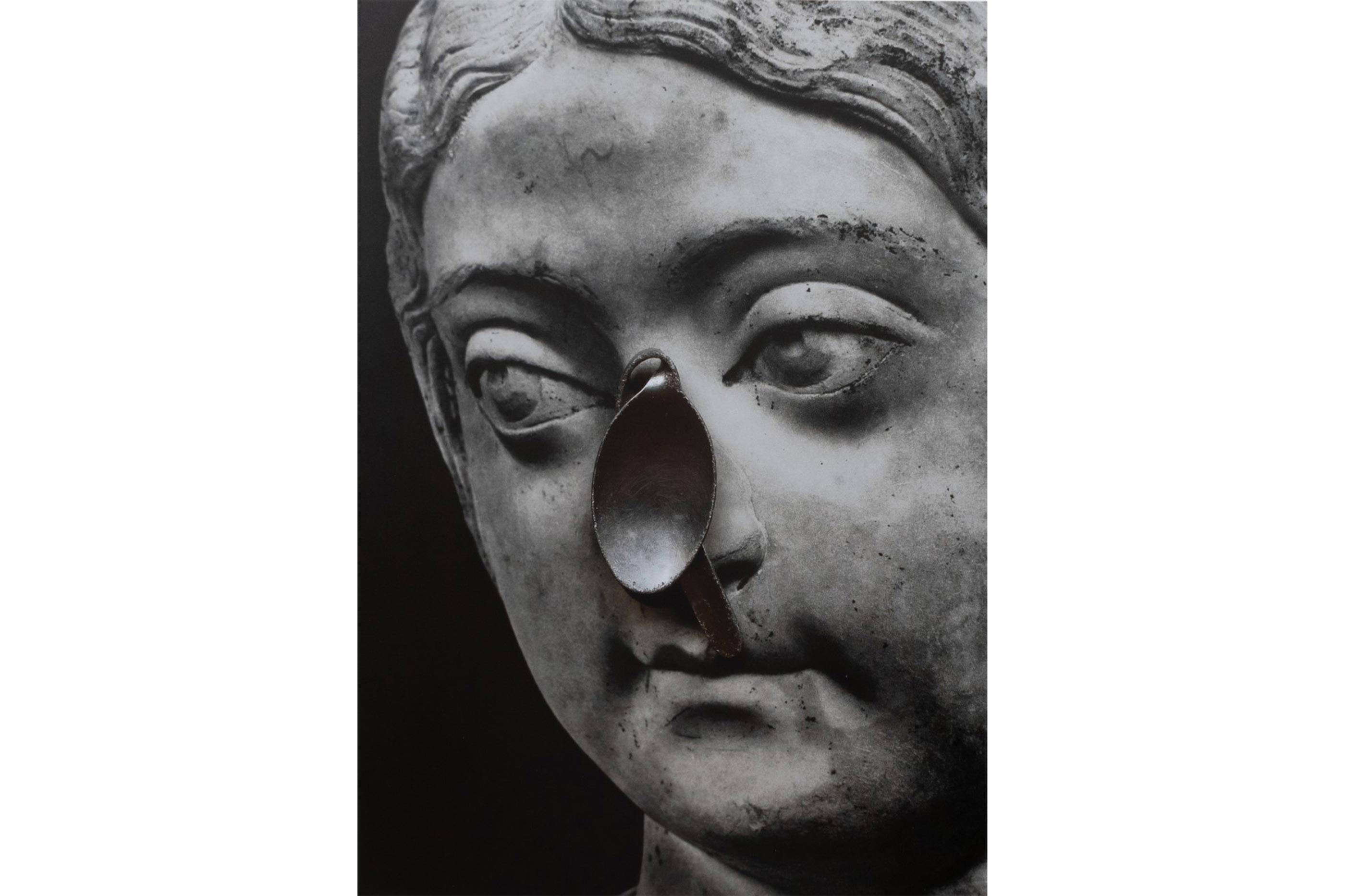 Dean Cross’ work is a collision of materials, concepts and histories, driven by his motivation to understand how his artworks sit within the oldest living culture on earth. Raised on Ngunnawal/Ngambri Country and a Worimi man through his paternal bloodline, his work invokes First Nations sovereignty through modern art concepts. Cross describes his artistry as practical, a revisitation of the past to generate new meaning through his work. Drawing on personal histories and memories collected, it is a unique visual language conveying his feeling of unravelling in his work, unveiling its potential to generate fresh meaning and motif. What is so encapsulating about Cross’ work is how it implores viewers to reflect on Australia’s colonial roots and history, and its impact on the First Nations people of the land. It is the kind of work that makes you feel something, an indelible impact left to linger even after leaving its presence.

To experience RUSSH Home in its entirety, issue one will be available on newsstands from October 20 and through our shop. Find a stockist near you.

PREVIOUS
10 music releases we're playing on loop in December
NEXT
Six creatives on the places they're eating, their most memorable gifts and the books they can't put down