For a collection titled Pétillant, it would only be natural to expect Giorgio Armani to offer a quite literally dazzling show for Armani Privé Haute Couture Fall 22. Such an idea did not fall short of the result this season for the king of embellishments.

It seems off-beat revival is in the air this couture season, where, instead of Y2k nostalgia and 90s silhouettes, designers are looking further back for their inspiration. For Maison Alaia and Schiaparelli it was 80s resurgence. For the likes of Virginie Viard at Chanel and now Mr. Armani, the roaring 20s and swinging 30s was a key touchpoint for couture. For Armani, it was about sparkle and frivolity. The offering of an escape into dreams and creativity, back when everything felt new and never-been-done before. 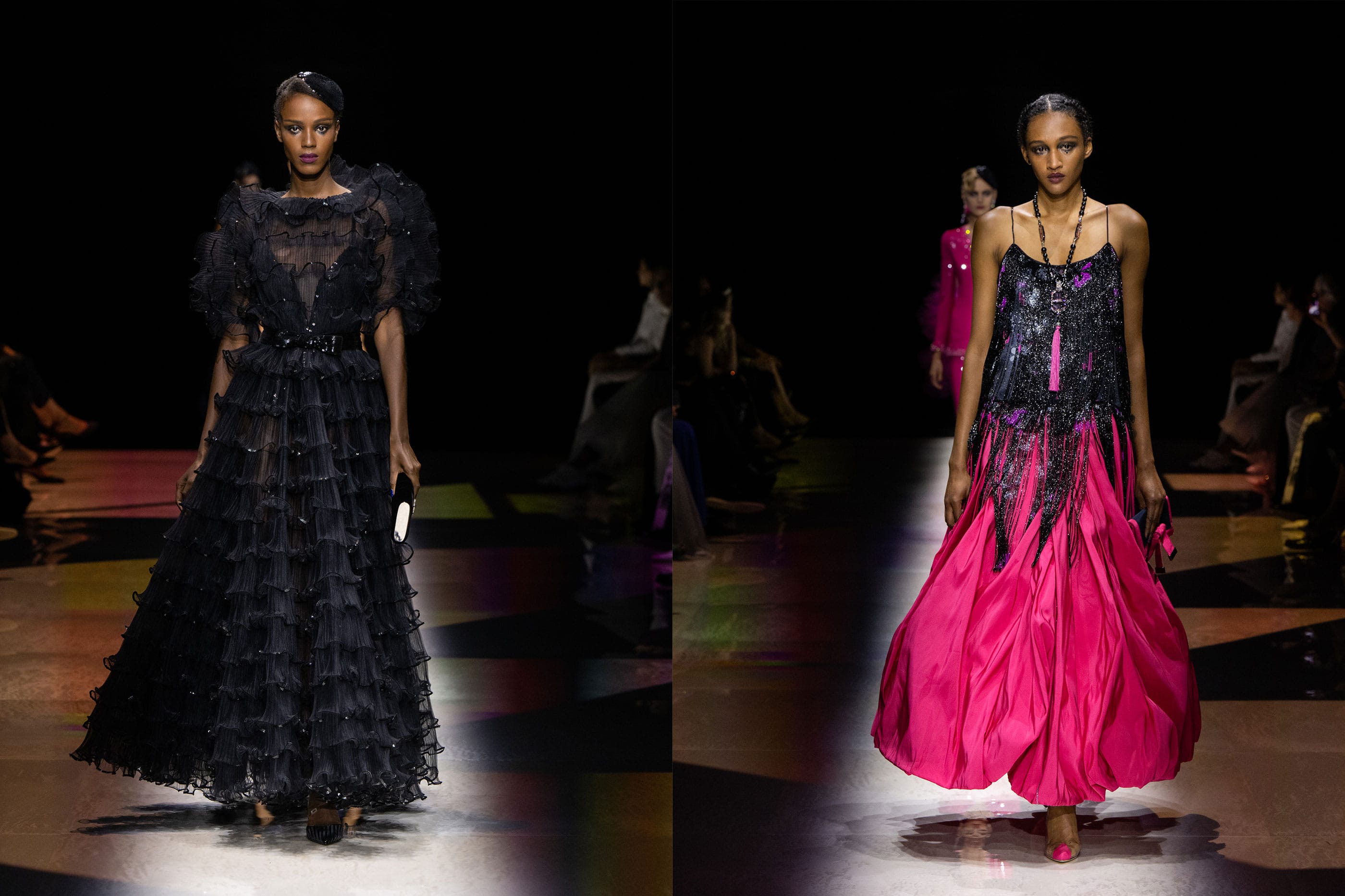 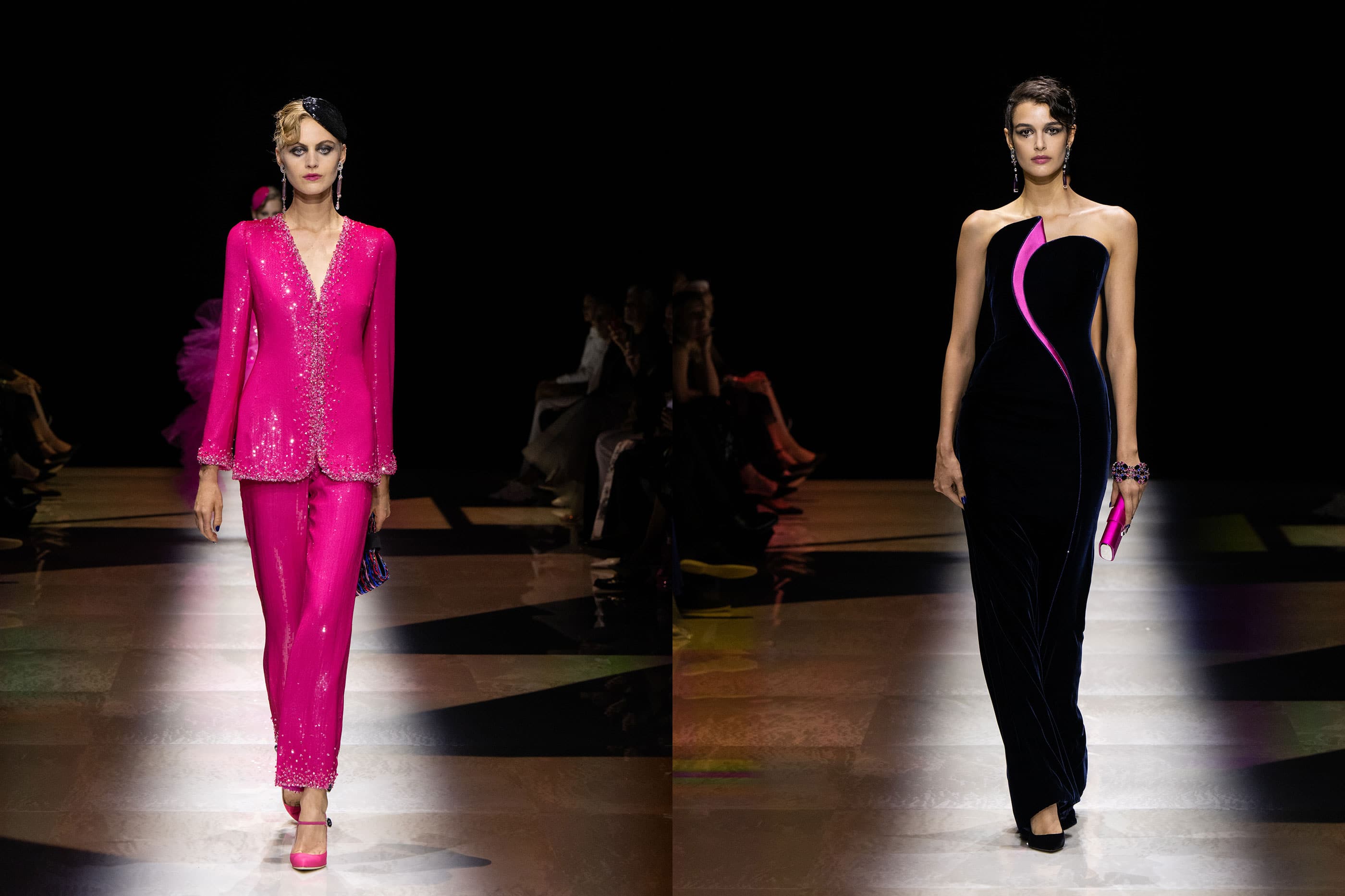 Take one look at the collection and you'll know the reference. Art deco shapes met yards of sequin and crystal encrusted fabrics, giving a sense that you were witnessing it from some kind of underground cabaret club with its spotlit runway and little bistro tables for guests. There were sequin jackets with rounded shoulder pads paired with Armani's signature silk parachute style pants. Gowns with hair-thin straps that held up glitzy dresses with dropped-waists and voluminous hemlines, strapless velvet column dresses that are so instantly Armani, and glittery gowns that fanned out with translucent gauze at the bust.

The palette was quintessentially him. Soft blues, lilacs, and greys were intercepted with hot pink, black, purple, and deep blue – a colour so rich that when models emerged wearing form fitting sequin dresses in the shade, they looked like they had been dipped in oil. 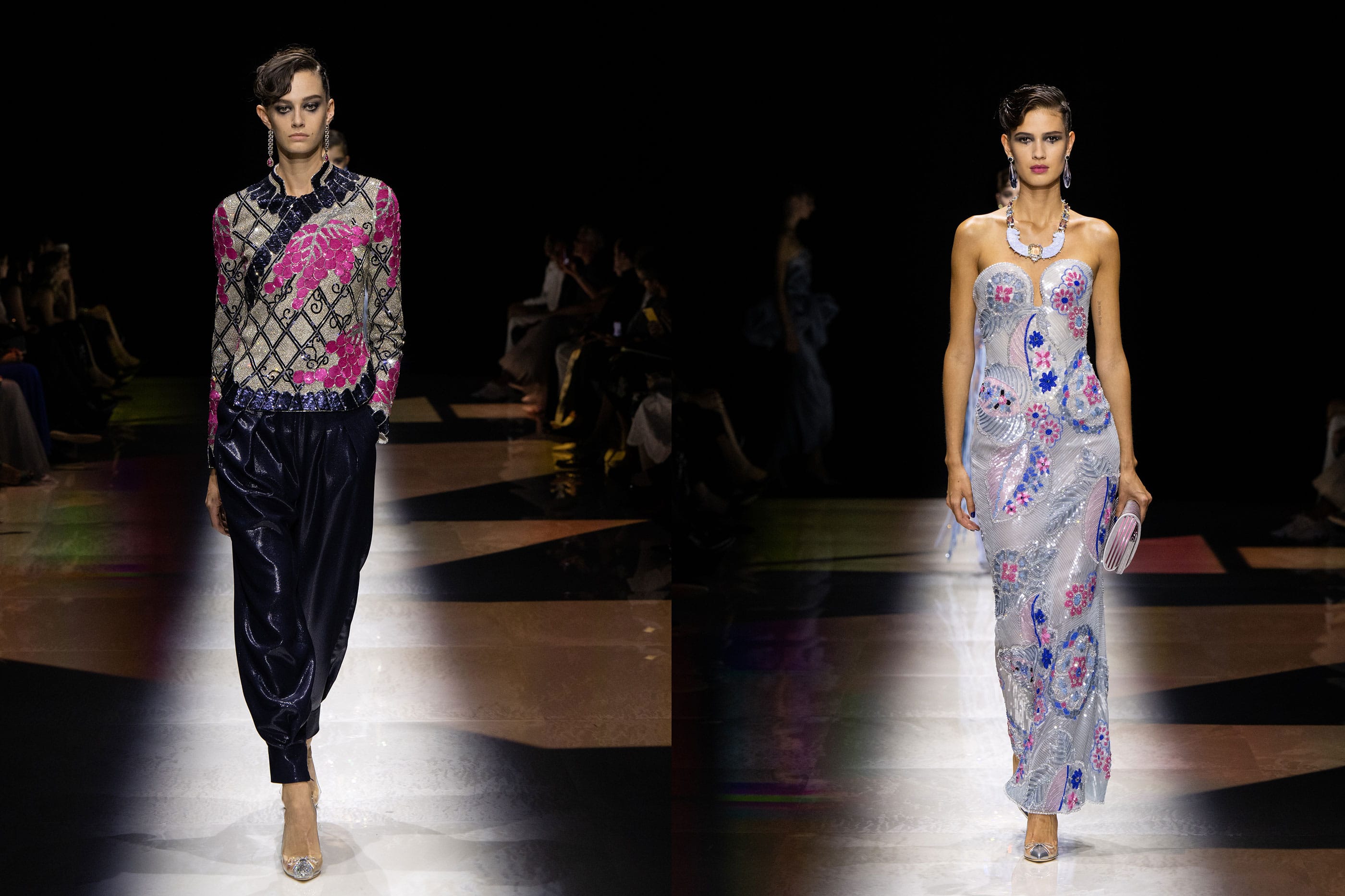 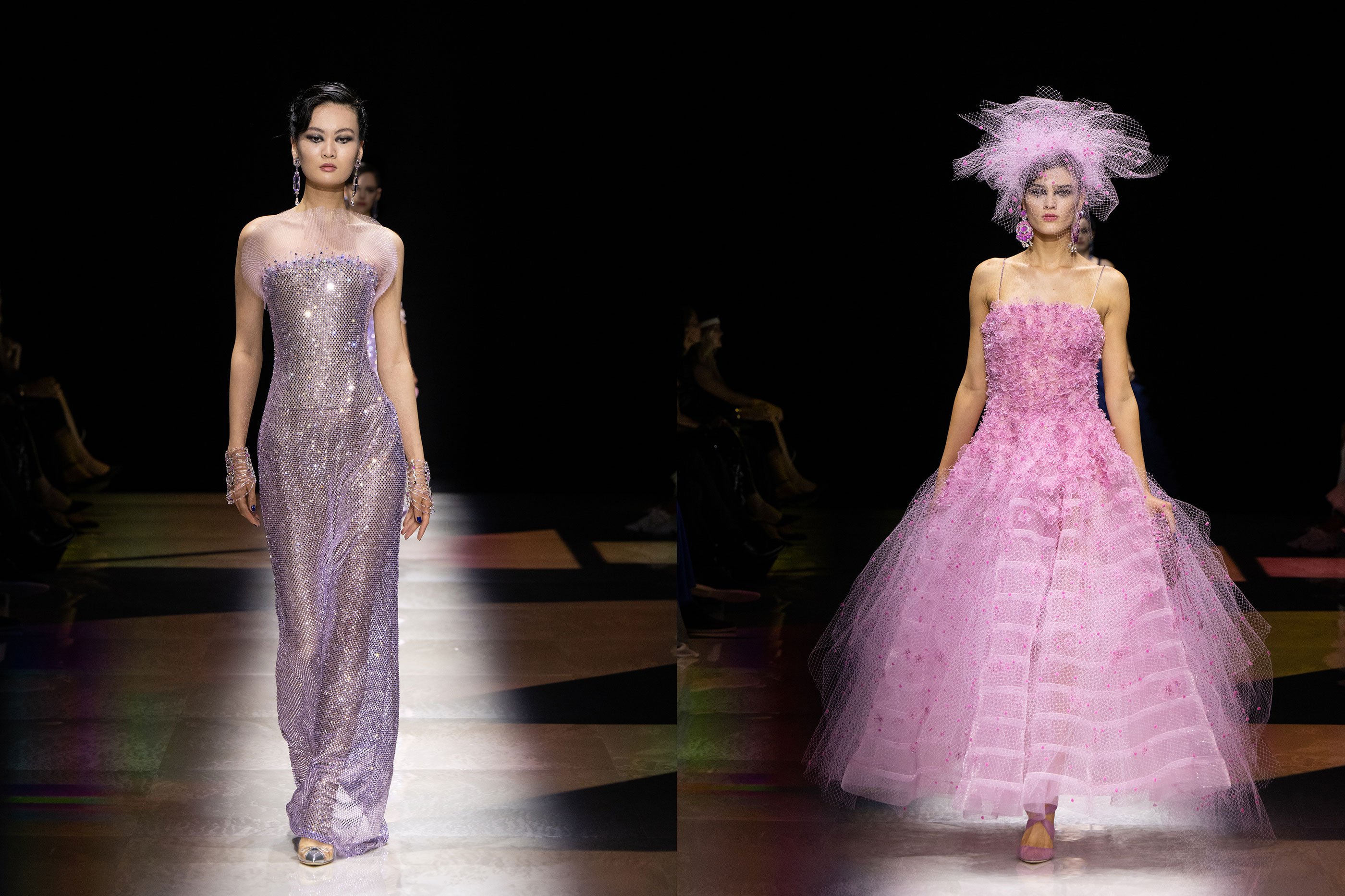 On the more casual end of the collection, beaded jumpers were worn with wide leg silk palazzo pants, fit for dinner or a night cap and bringing us back to Armani's everlasting laid-back cool Italian identity. Tailored pants were worn with mismatched jackets and sheer organza cardigans that trailed low to hems like the whisper of a cape, and ultimately, sold us back the idea of who the Armani woman is. Most importantly, why we want to be her. 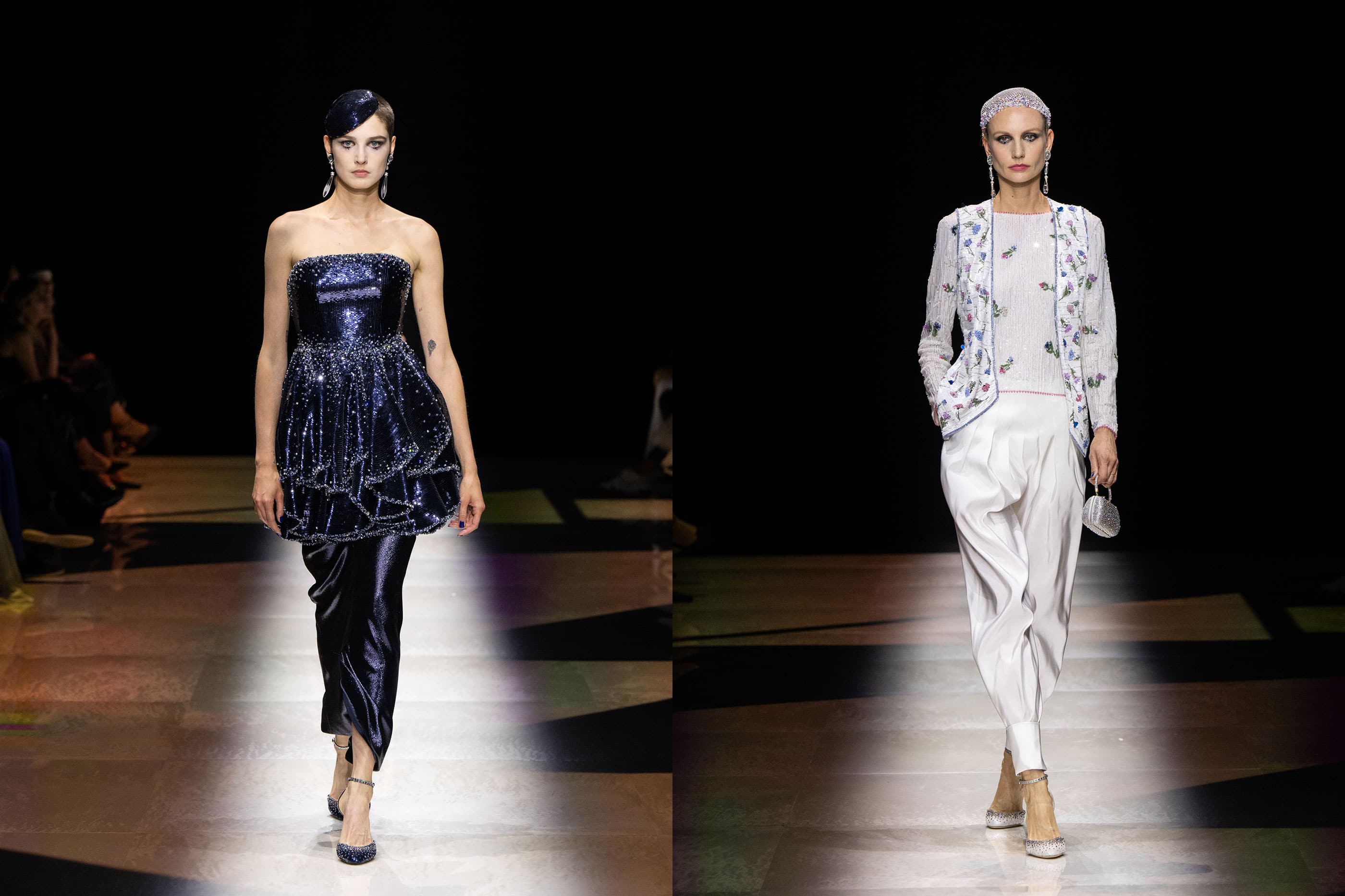 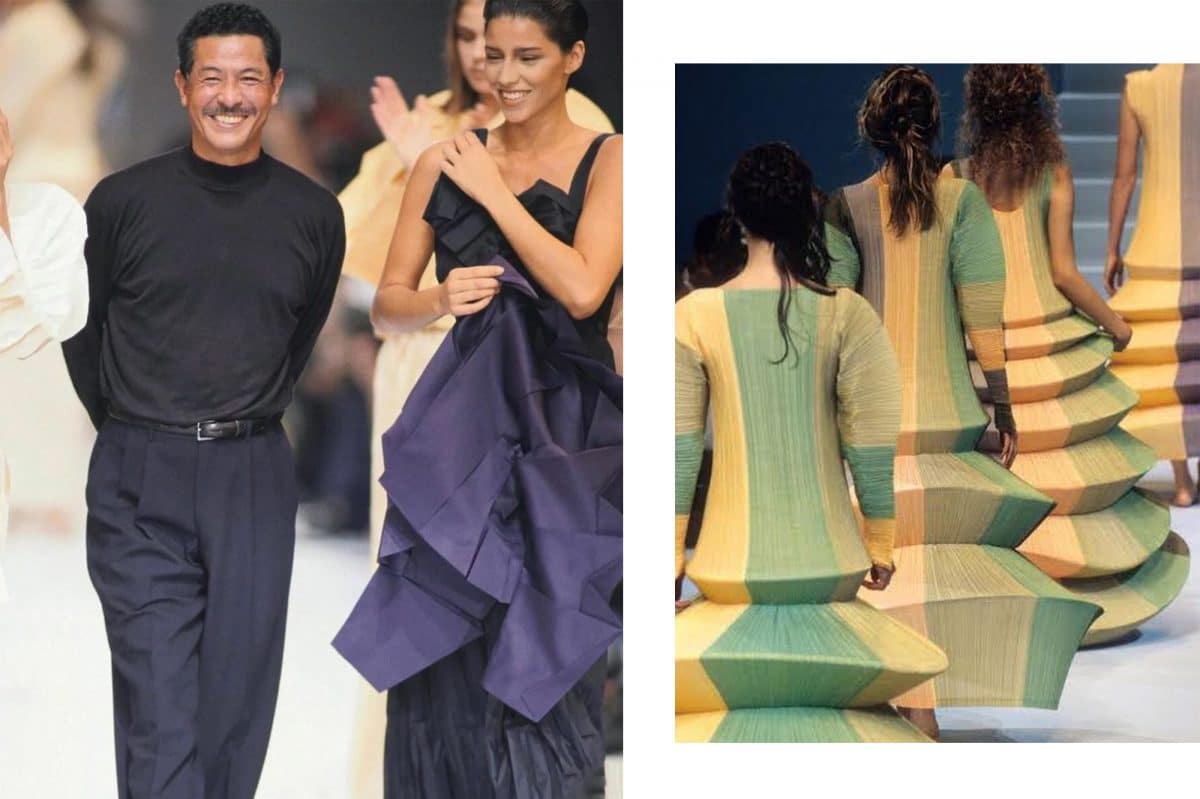 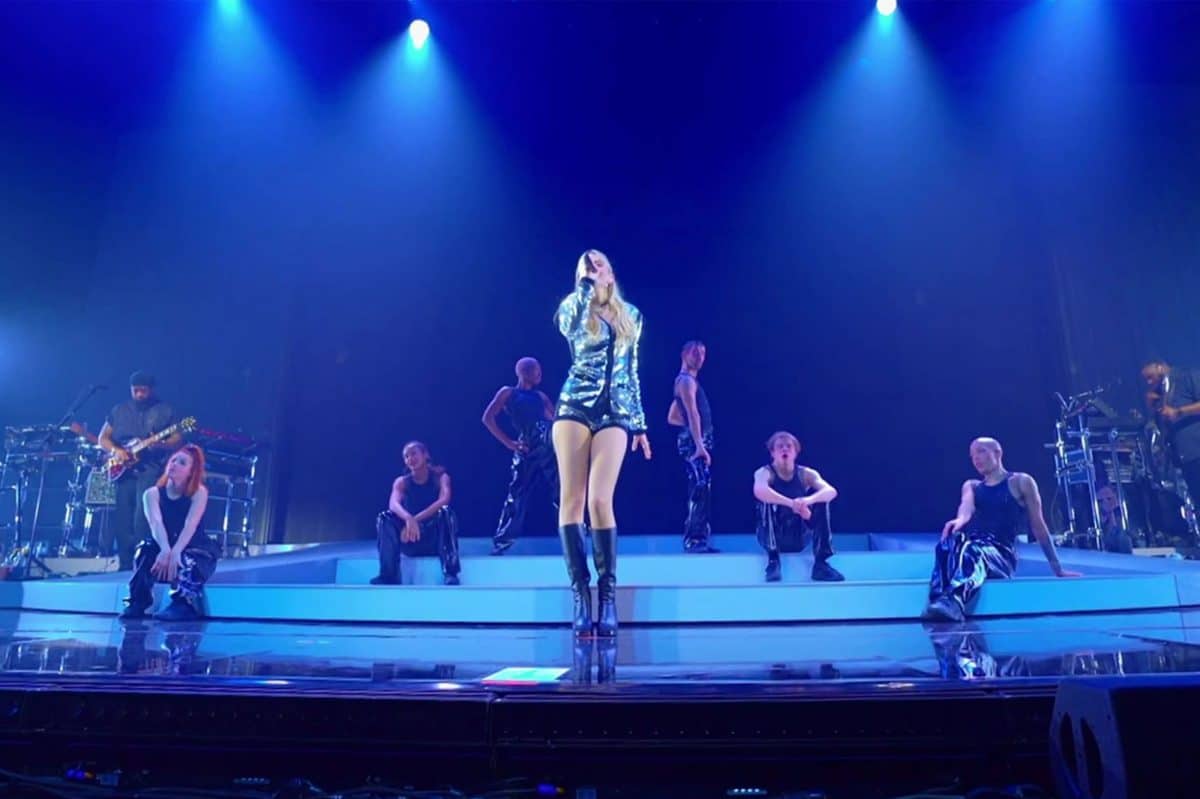