When two artists partner together, a common thread is woven between their practices, establishing a connection that otherwise may not have been realised. Stillness is a Fiction, the debut collaborative show between Australian artists Anna Harrison and Matthew Graeme Johnson reveals just that – a relationship between Harrison's evocative poetry and Johnson's photographic calligraphies.

The exhibition is an ode to the ocean in all its forms, bringing together the written word and calligraphy from the ocean’s surface – coming to fruition in the offering of four works from each artist. The first exhibition of 2021 for renowned Sydney gallery, Jerico Contemporary, Stillness is a Fiction speaks to the universal feeling of existing on the edge of an ever-changing tide.

Below, we speak to RUSSH's own contributing editor, Harrison, and Johnson about the exhibition's connection to nature, translating imagery into poetic form and the importance of being both seen; and heard.

Tell me a bit about how the two of you came together for this collaboration. How did the process begin?

Anna: I’ve been a fan of Matthews work for a long time – first it struck me on a purely aesthetic level and then more deeply once I learned of the unique process behind his images. When Jerico reached out to say Matt was interested in collaborating I jumped at the chance. Jerico put us in touch and it all flowed very easily and naturally from there. Matt and I dialogued about a few loose themes and ideas, but he really allowed me the freedom to interpret his images in a very intuitive way. My job was just to connect with Matt’s work and be open to what came.

Matthew: I have long questioned what nature might be trying to tell us through the often calligraphic markings in my works, and how intriguing it might be to have an artist, working in a different discipline, to interpret these markings through their own practice. So when Jerico put forward the idea of Anna and I collaborating on a show I was immediately on board. One of the first things Anna mentioned when we started to discuss an approach to collaborating was how when she sees certain imagery, “words tend to flow quite organically in response, almost as if I am simply a translator for what the images themselves have to say”, so right from the beginning it was clear that we were on a very similar page. The process that followed felt very natural, and I believe the end result is testament to that.

How do the mediums of visual poetry and written poetry merge to create a common thread between your respective disciplines?

A: Images and words emerge from the same creative urge – to render some aspect of the human experience into form, to communicate a feeling or idea and engage with beauty on some level. My way of expressing my interpretation of reality is through language, Matt’s is through image, specifically photographs, but ultimately we’re doing the same thing: telling a story through our own lens. And stories can be told in innumerable ways through innumerable lenses. 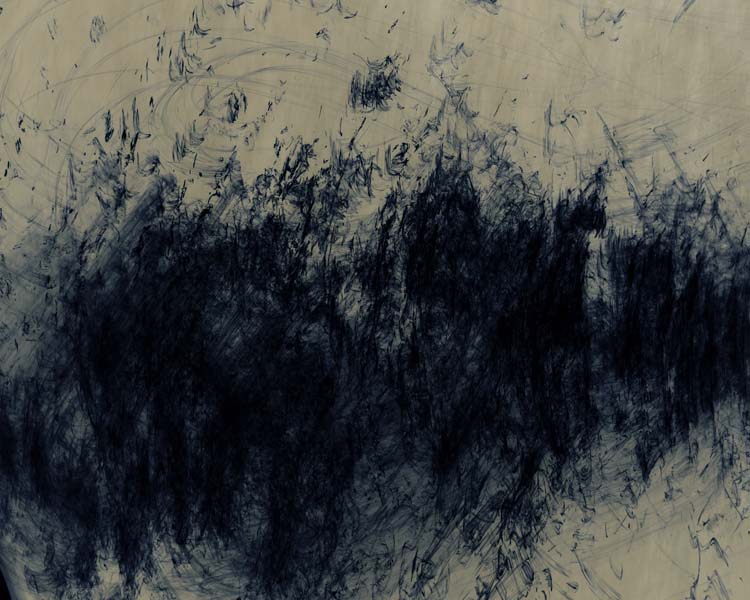 The exhibition title, Stillness Is A Fiction, is quite compelling. How does it connect to the work you have created together?

A: It can be read a few different ways, but I guess at its crux it refers to the very real fact that everything is alive and in constant motion. When you look out at a perfectly still ocean on a perfectly clear day it belies the multitudes of life and activity teaming within it and even the subtleties of movement on its seemingly static surface. It’s the same with human biology – even in our deepest state of rest nothing within us is ever stagnant, right down to our cells constantly dying and replacing themselves at an unimaginable rate. We are as all of nature is, in a state of perpetual growth, death and renewal. Whenever I’ve felt creatively stuck or found myself in a bit of a personal rut I go to the sea, in part because it reminds me of this fundamental fact which I think Matt’s images really bring to life.

The show is “an ode to the ocean in all its forms” – what are your individual connections to the ocean and how are they represented through the exhibition?

A: Matt’s work seeks to capture the fleeting signature of light on water, quite literally, and that concept really struck a match in my imagination as a writer. One of my favourite novels of all time is called Ocean Sea. There’s a character in it who’s dedicated to painting the sea with the sea. He stands on the shore with an easel and dips his brush into the salty water and starts painting with it. But of course he can only render the sea with the sea for the briefest of moments before it quickly evaporates, changes form, disappears from view and becomes mere breath. The sea is such a great metaphor for life because of this mysterious, mercurial, constantly shifting nature – the minute you try to capture it, it’s gone, irrevocably changed, but so much beauty can arise from the act of trying.

M: I feel at home when the sea is near. I have been fortunate enough to always live near the ocean. It is a place for solace, for adventure, for cleansing. It is also the ultimate canvas for a photographer - ever-changing, never repeating and ceaselessly sublime despite its mood.

Anna, can you tell me about the process of translating Matt’s imagery into poetic form?

A: Translating Matt’s images into words was really just a case of turning the volume down on my own inner noise and ‘listening’ in. If Matt’s pictures had something to say I wanted to let them speak. I think this is why it all happened very fluidly – I didn’t try to figure out what to write in response to a visual stimulus, I listened and tried to tell its story as best I could the way I know how, through language. Of course I wasn’t entirely neutral – I was viewing through my filter and expressing what I saw and felt in my own words, but I think for me there’s more freedom in believing I really don’t have much to do with it, that I’m being dictated to by the images themselves, maybe even by the sea itself if I want to be really abstract and romantic about it (which I almost always do). 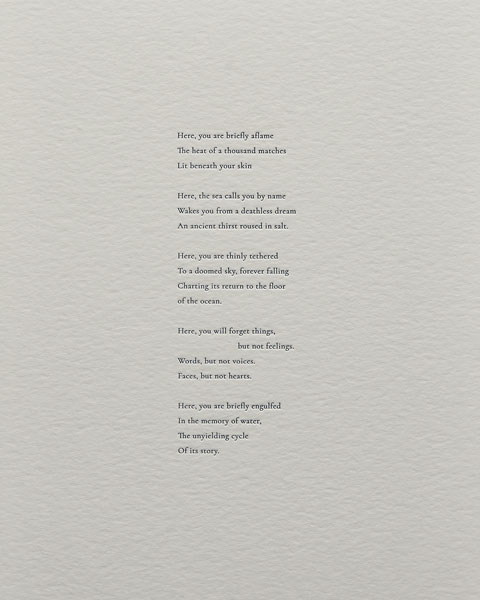 How does Stillness Is A Fiction, reconnect us to the dialogue that occurs between humans and nature?

A: Maybe just as a small reminder that nature is constantly speaking to and through us. The natural world is our memory, it holds our history and if we’re kind to it, our future. If we remove ourselves from nature at large, we disconnect from our own inner nature – the things that make us truly human. In the dialogue between humans and nature, humans definitely do too much of the talking. We’d do well to shut up and listen more, in every sense.

Stillness is a Fiction will be showing at Jerico Contemporary from January 14th - 30th 2021.

PREVIOUS
Studio Ghibli is releasing a limited edition book in homage to the Ghibli museum
NEXT
Tom Holland is about to get nasty in his new film, 'Cherry'

From ‘7 Methods of Killing Kylie Jenner’, Amyl and the Sniffers, Sweet Summer Sounds and so much more…

For your considered viewing pleasure.

February is for lovers, and theatrics.