Step into Brisbane's Institute of Modern Art, whip back the blue curtain dotted with eyes, and you'll find a curious assemblage of objects and furniture before you. Natalya Hughes has transformed the gallery space into a treatment room of sorts, an exhibition she's entitled The Interior. There's U-shaped couches upholstered in sphinx motifs and images of rats, soft rugs line the floor and nearly everywhere you look, the curvature of the female form juts out at you, be it in a hand-painted mural or 3D sculptures posing as ancient vessels.

For Hughes, the space is a response to Freud and psychoanalysis more broadly, a subject which Hughes uses to explore gendered power dynamics. For some, Freud and women can see at odds with each other, given the psychoanalysts problematic conceptions of the latter, but as Hughes aptly puts it, "gender is as much a problem for psychoanalysis as it is for us in culture at large".

After viewing The Interior at the annual Institute of Modern Art Gala, RUSSH caught up with Natalya Hughes to discuss her solo exhibition. Below, she speaks on what drew her to psychoanalysis and the potential is has to open us up to our unconscious bias, including our ways of conceptualising gender. 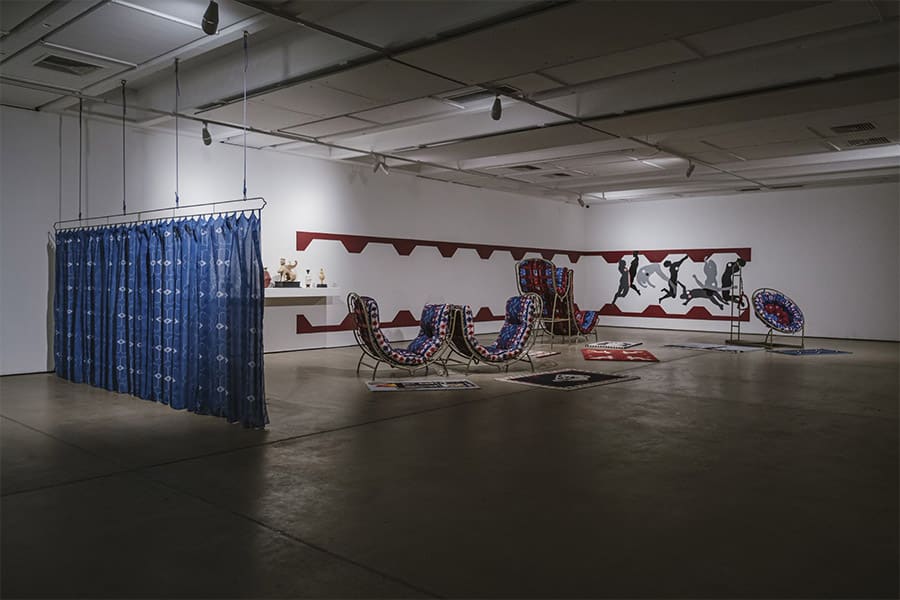 Can you describe The Interior in your own words?

The Interior is an installation (of objects, furniture, rugs etc) that responds to the iconic image of Freud's treatment room and what it represents, culturally, socially. In particular I’ve riffed off Freud's couch and other elements of his treatment room décor as a basis to build my own place. It’s one that, hopefully, speaks to and about psychoanalysis and what it might offer in the here and now.

How did The Interior begin? Was there an aspect of the exhibition, be it the couches or rugs, that came first?

It’s hard to say as it was all kind of percolating at the same time and it was all in response to Freud’s treatment room. But I guess the impulse to make something of the chairs came first. I really wanted to make furniture, for “the talking cure” in particular. And working from Freud’s interior helped shape the kind of aesthetic I wanted to use. The other thing I started early was the rug making, mainly because I had never made rugs before and felt like I needed to practice! 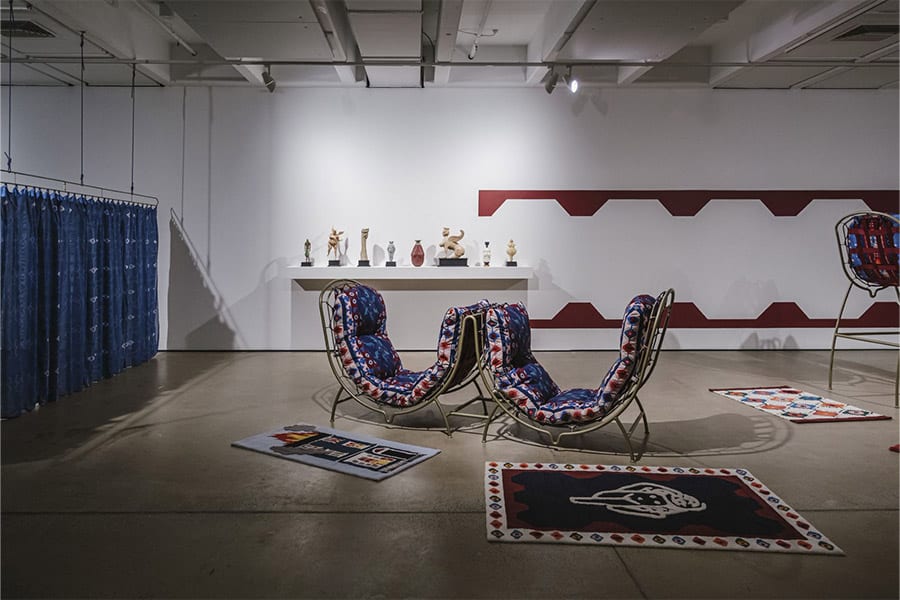 What were you reading, watching and listening to while creating The Interior?

Lots of reading about and by Freud, mainly his case studies, and books like Nathan Kravis’s On the Couch: The Repressed History of the Analytic Couch from Plato to Freud. I also listened to a lot of podcasts about psychoanalysis (like Three Associating) and whatever I could find that was relevant to the project. But I promise it wasn’t all highbrow. I binged Selling Sunset while I made the fabric designs. That was an adventure. And I always also listen to alot of music and a lot of fiction (audiobooks) to distract me from the repetitiveness of some of what I do in the studio.

The name itself is many-layered, touching on the private, personal and domestic. How did this come about?

I think the name came pretty early and I feel like it was around from the time the idea for the show came about (like they arrived at the same time). I’d read my former colleague Charles Rice’s book called The Emergence of the Interior about 5 years ago. And I had been thinking about the importance of decoration and décor in quite a few bodies of work. I knew that the dark space of our interiors, our psyche’s, was also a large part of the project so it seemed like a very natural fit. I think in the instance of interior of décor and the interior of our unconscious we don’t pay nearly enough attention.

What draws you to psychoanalysis?

So I was initially drawn to it when in art school. Psychoanalysis seemed to offer interesting ways of thinking and talking about art. It seemed really productive in that way, so I think I was willing to engage and look past some of its more problematic ideas. Then, when I needed help I let it into my life in a more significant way, that is I undertook psychoanalysis (as an analysand). So I come to it now as an advocate for what it can do for an individual and for thinking things through at a cultural level. 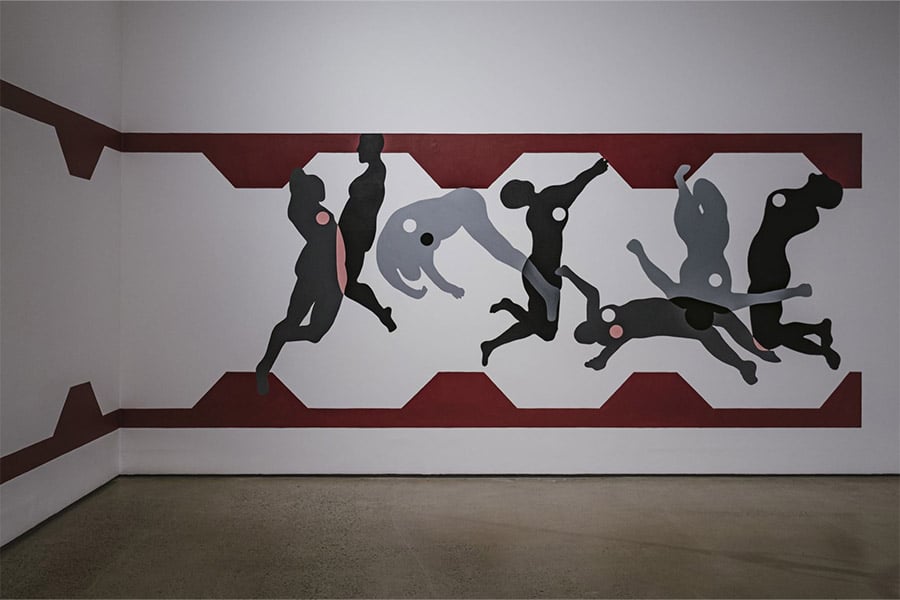 The female form features heavily throughout the exhibition, softening the space and bringing a sense of comfort overall. Was this a deliberate approach in order to confront women as a problem?

Women’s bodies, their distinct and individual forms, are everywhere in the work. Sometimes they soften objects, sometimes they make them uncomfortable, excessive, a bit challenging. But they are everywhere in the show and this was very deliberate. For Freud and early psychoanalysis women were a problem to be reckoned with. In later moments of psychoanalysis they are thought through differently. But gender is as much a problem for psychoanalysis as it is for us in culture at large. And for me talking and thinking about how we produce, how we accept and how we challenge representations of women is very important. I’m not super subtle about confronting audiences with that. But I do try to bring humour and beauty to make the conversation/confrontation more enjoyable.

When I’m not creating you’ll find me…

Emailing, probably. But ideally hanging out with my little family of three.

Can you tell me a bit about the sculptures?

The sculptures were so much fun to make. They were produced with assistance from the artist Max Athans who is a wizard when it comes to 3D modelling. I wanted to work with objects in Freud’s collection as a starting point. Fortunately the Freud Museum and its publications have lots of visual material of his antiquities so that was the basis. I selected some for their importance in Freud’s writing, and some because they had potential for exaggeration. When it came to adapting them, Max and I would have strange but very enjoyable conversations. I would pitch some bodily addition/exaggeration/blasphemy and no matter how outrageous they would know how to proceed. After the sculptures were printed, my assistant and I painted them to make them look less plastic, more terracotta/marble/stone. I love them. 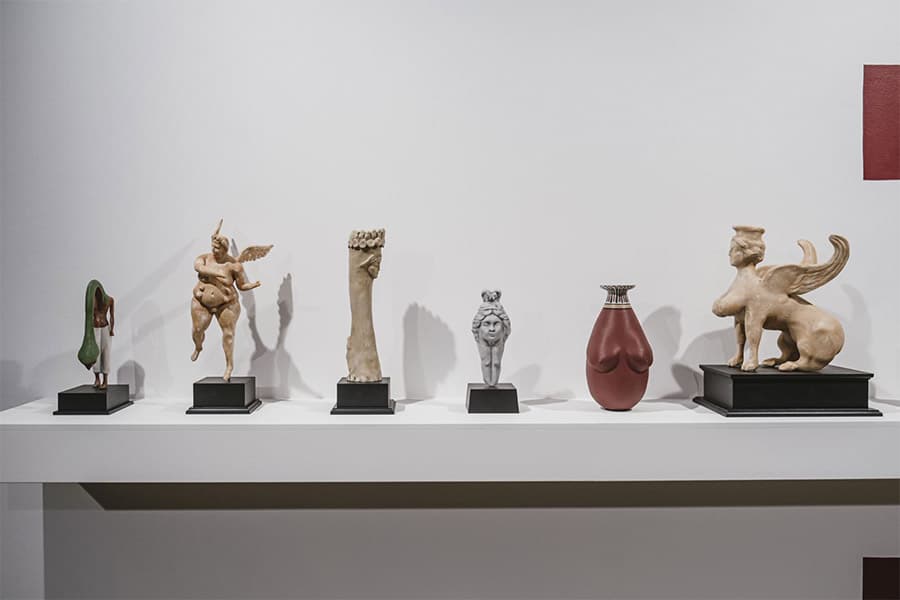 How do you think our conception of what a woman is, prevents women from sitting in positions of power?

I think it's worth noting that women do sit in positions of power. But it seems that even when they get there they are scrutinized, challenged and undermined in ways that make it pretty hard for them to operate in ways equivalent to men in those positions. (Think of the ways Julia Gillard was always reduced to her physicality). I think our construction of what a woman is and should be bears on our assessment of their performance in ways that we aren’t even necessarily conscious of.

My words to live by are…

This too shall pass!

The Interior by Natalya Hughes is open to the public for free at the Institute of Modern Art, Brisbane until October 1.