Two of the fashion industry's biggest darlings, Kim Jones and Travis Scott have united for what is sure to be one of the most unforgettable shows of the season. A homage to the fashion Houses' long-term relationship with the Texan landscape, the Dior men's summer 2022 show proves that this collection is far from Jones' or Scott's first rodeo.

When the formidable Christian Dior first journeyed to America in 1947, one of the first destinations on his odyssey was Texas; a location that had a lasting impact on the designer for its rugged, extraordinary and impressionable terrain. Inspired by the luxury Houses' connection to the state, creative director Jones collaborated with Texan-born rapper, singer, songwriter and music producer, Scott, for a collection that brought this legacy into the now for Dior men's summer 2022.

The collection, aptly titled Cactus Jack Dior (a fusion of the two creative minds), debuted in Paris during Fashion Week; signifying a collection that represented collaboration in its truest form.

"A conversation – between two friends, two cultures, and two different eras – results in a collection that explores the identities of a groundbreaking modern musician and the heritage of one of the leading Parisian couture houses," the show notes explained. And subsequently, this ethos is exactly what we saw sent down the runway. 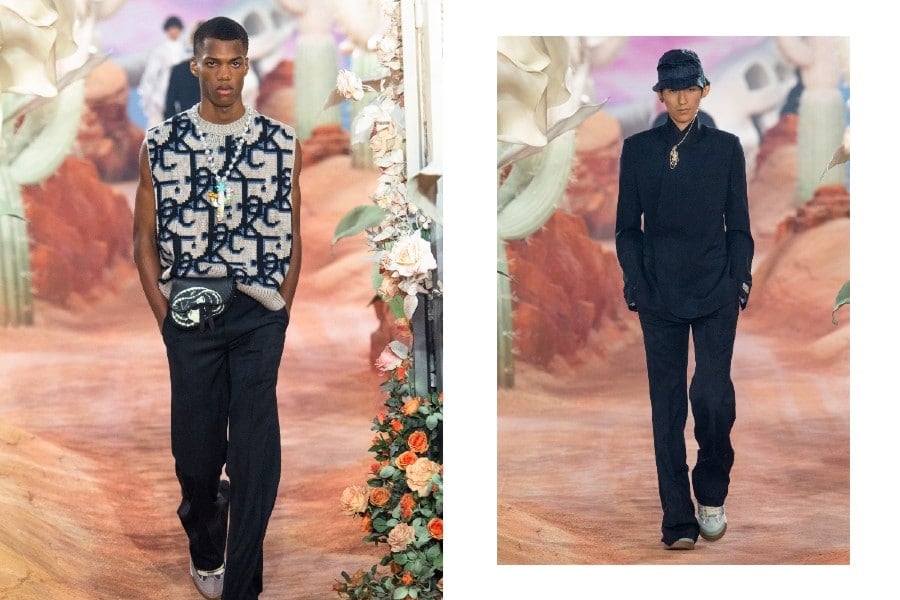 The savoir-faire of the House was not lost – with strong nods to tailoring in more relaxed forms and the subtle notes to formality courtesy of the Tailleur Oblique. Elsewhere, Scott's street-driven style shone through with elements of sportswear and a reimagining of the Dior logotype coming to the forefront.

A colour palette of soothing dull pinks, café browns, dusty greys, creamy whites and pale blues, with pops of black and electric green, is reminiscent of the barren desert landscape the duo hoped to recreate. And the runway itself did not fall short of this vision either – decorated by sprouting cacti, unusually large mushrooms and rocky terrain. 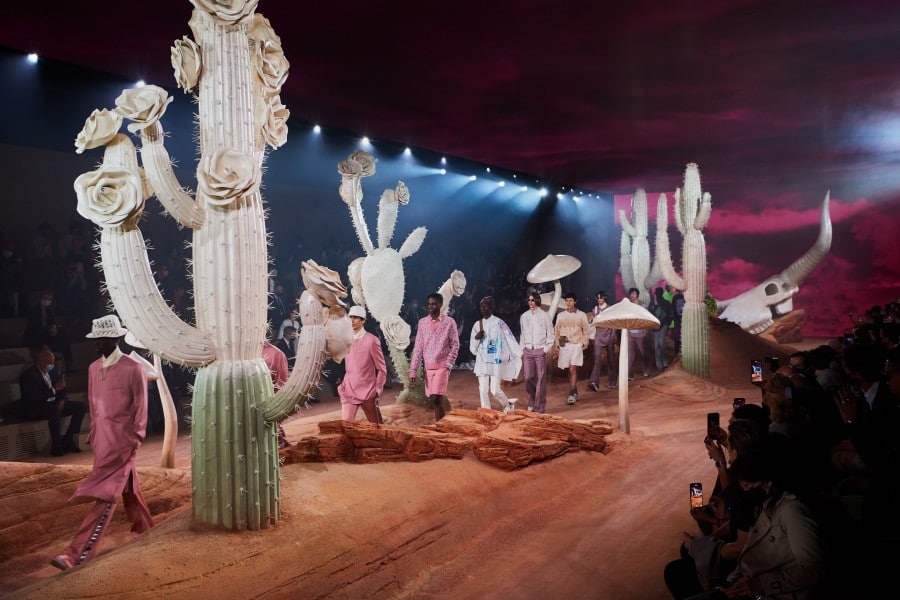 Dior men's summer 2022 marks Jones' third year taking lead behind the helms of Dior menswear. Since his appointment, we have seen Dior Homme embark through many awe inspiring transformations. From its technicolour collaborations with street artist Kenny Scharf for Dior Men AW 21 to its latest capsule collection with creative director Chitose Abe from Japanese brand SACAI; it seems as though the creative director pulls little stops when it comes to crafting objects of menswear desire.

Scott himself is also no stranger to the industry and the world of collaborations for that matter; working with brands like Byredo and Nike under his record label and creative collective Cactus Jack.

To re-watch the Dior men's summer 22 show, head to Dior.com or click the video livestream below.