When you begin your debut fashion week show, the opening show at AAFW no less, blasting a song by Lil Asaf & MFKZT you are sending a strong message that you’re not here to mess around. It is true, Jordan Dalah has not come to make dresses we can wear to a summer BBQ. Thank god. This morning he sent 43 looks around his show space; a brutalist punch of patchwork from all the airport waiting lounge carpets we can remember, with the confidence of a creator who knows exactly who he is and what he wants to be. These moments don’t happen every fashion week. And if the crystals in my pocket could foretell the future, I’d say they’d be glowing toward this morning’s moment in Dalah’s world, as the beginning of something truly new. A time we shall embrace under bustles like never before. Some will call it mock Tudor, even the designer himself, and it will be clear to all that Rei Kawakubo is his dream woman, but the magic of Dalah’s collection (for me) is that it all feels so historically inaccurate and completely free. 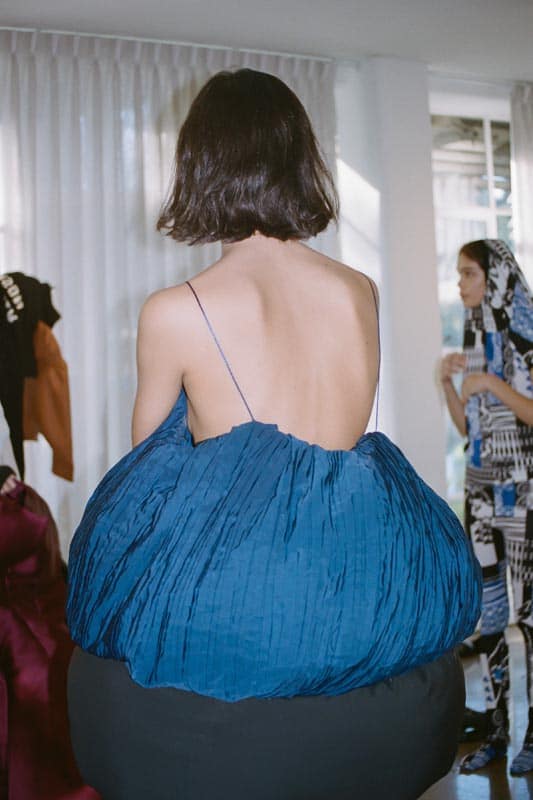 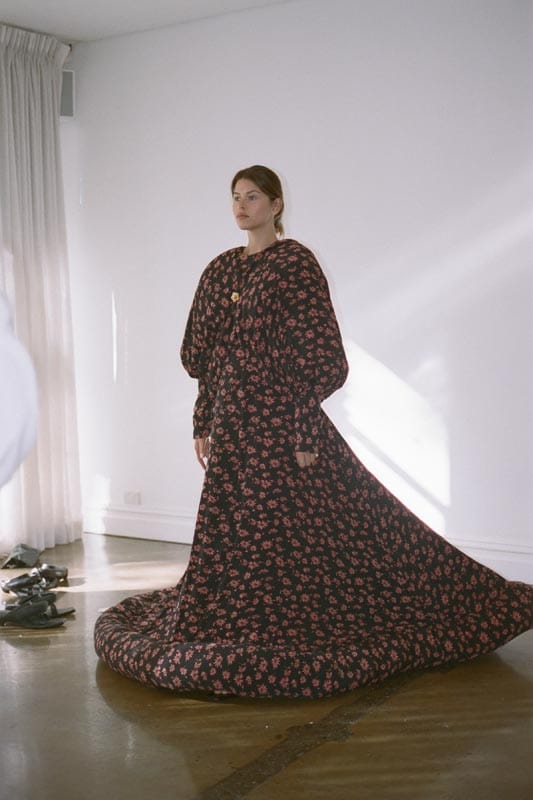 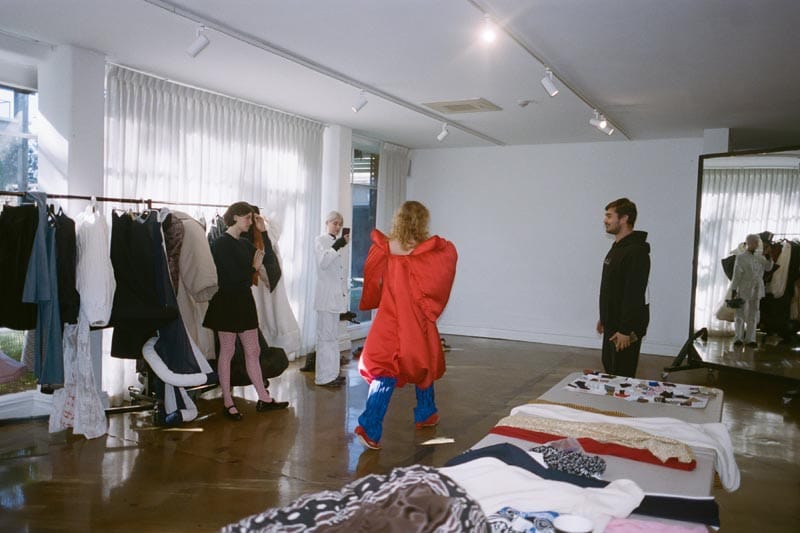 The result is something that is dramatically beautiful; a marriage of the sublime with the mundane and just so very modern. An abundant cherry-red satin-bow coat paired with blue denim and oversized thongs (a collaboration with Actually Existing) as worn by the angelic Lily Nova. An ice-blue crepe dress with a silk dupion collar; textural coats equally as languid as they are voluminous; and navy-blue skirt suit with a turned out hem that made me realise skirt suits were the one thing I was missing from my wardrobe. Dalah worked with Jon Pulitano to create hair that evoked Marie Antoinette meets Jackie O and with stylist (and our very own fashion editor) Charlotte Agnew who brings a sense of freshness and unknown to all she touches. A pregnant Georgia Fowler closed the show reminiscent of a high priestess, and as a sentimental nod to campaign images Dalah created upon arriving back in Australia following the launch of his label in 2018. 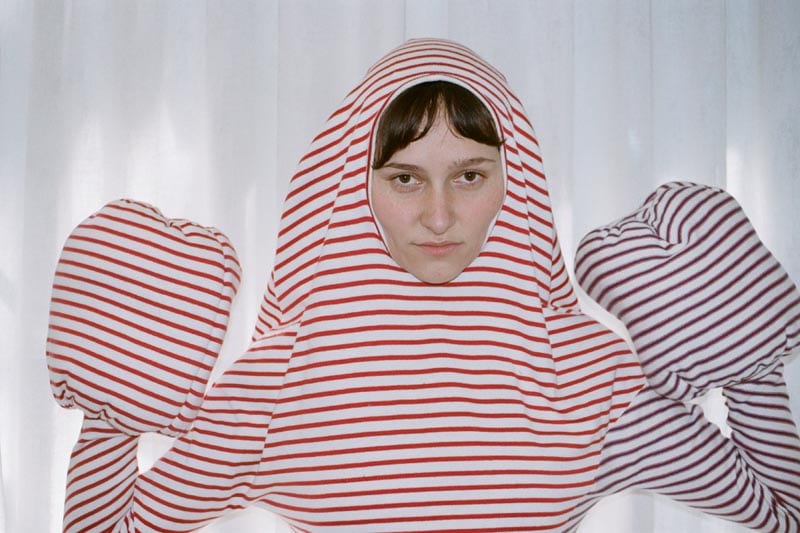 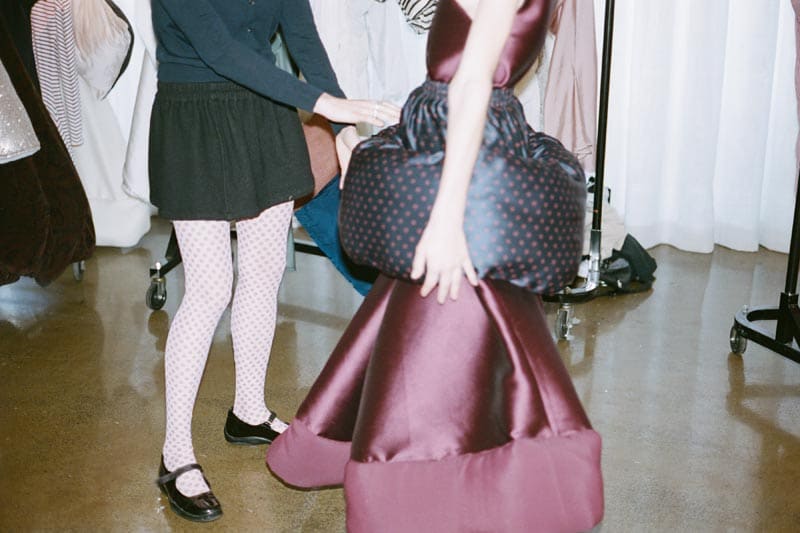 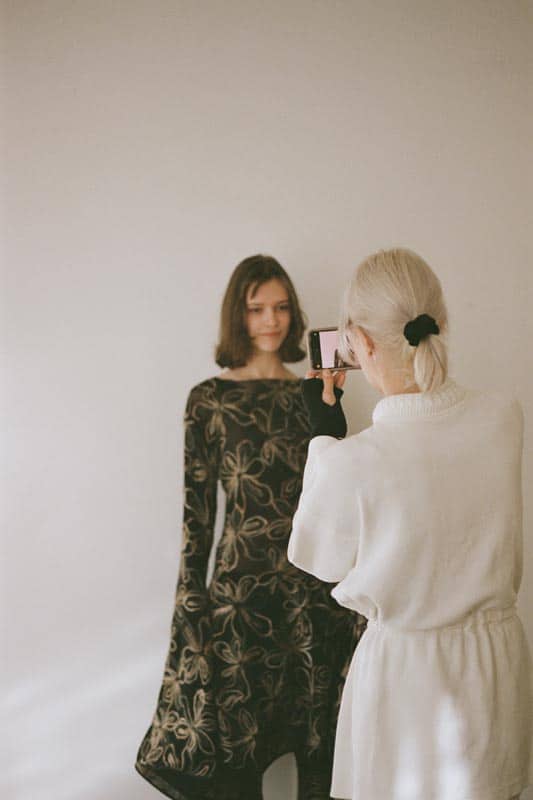 I first glimpsed Dalah’s Sydney studio on my morning walk to work sometime last year. In a small, stealth shopfront along Oxford Street, his high volume hung nonchalantly in the window of an extremely minimal workspace. I recognised the very specific silhouette but knew nothing of the man or the name printed in a feminine font on the glass. In fact, having noticed his work previously, I assumed he was a British designer and found myself very curious to know why he had set up in my neighbourhood during this odd pandemic year. 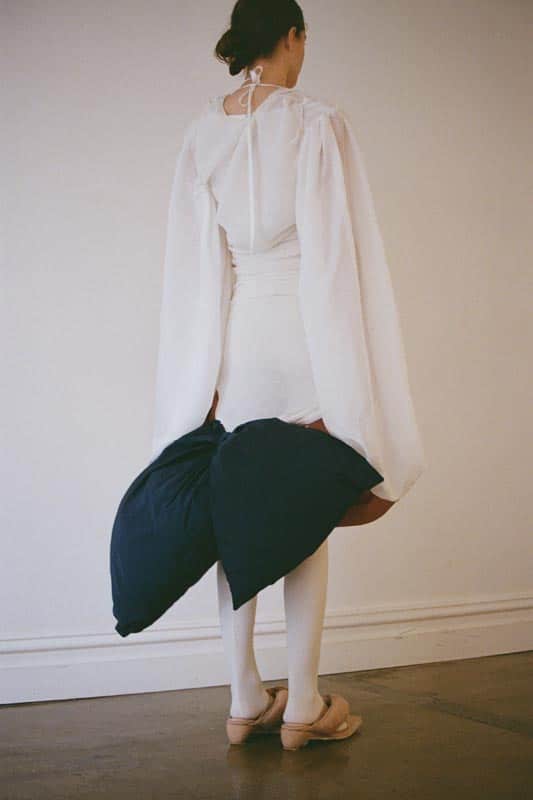 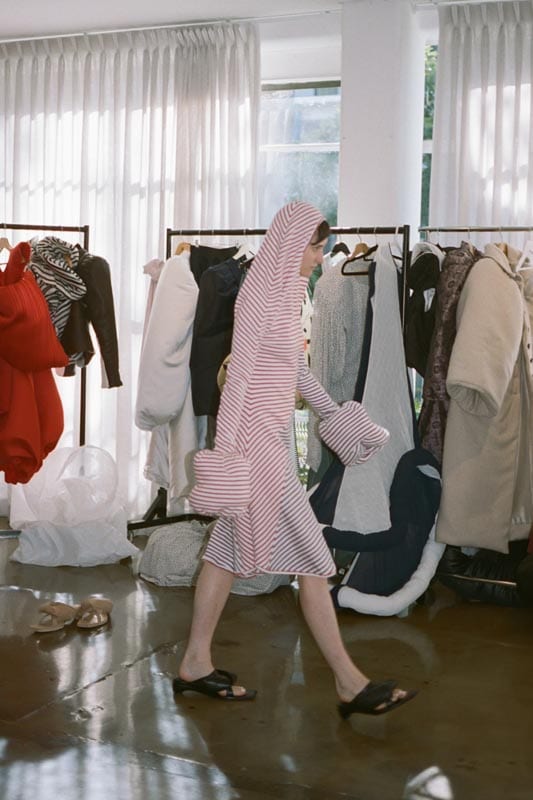 Upon finally meeting Dalah, a friendly Croc-wearing, wide-smiling Sydney native, with a slight English accent from his time studying at Central Saint Martins, it was easy to understand why I had misplaced this eponymous label. Dalah, if it’s not clear by this point, is definitely not your typical Australian designer; not black-clad Bondi-cool, nor concerned with capturing the easy-breezy sunchaser lifestyle so many of our homegrown talents design for. One of five children, (and with a twin brother he says he is very close to but also very different from), Dalah grew up with a fierce love of drawing from a very young age. He was a self-described “weird kid, not eclectic or cool”. At five, he loved dolls and by high school, instead of being good at sport at the all-boys school he attended, he was more into painting and drawing historical women and watching cooking shows (he even un-ironically mentions Jamie Oliver). Encouraged by his parents into art school, he began to paint and still does “odd commissions” – having recently done a piece for a friend’s new office space. But Dalah was well into his architecture degree when he was accepted into Central Saint Martins, ultimately connecting him with his desire to make clothes for women. 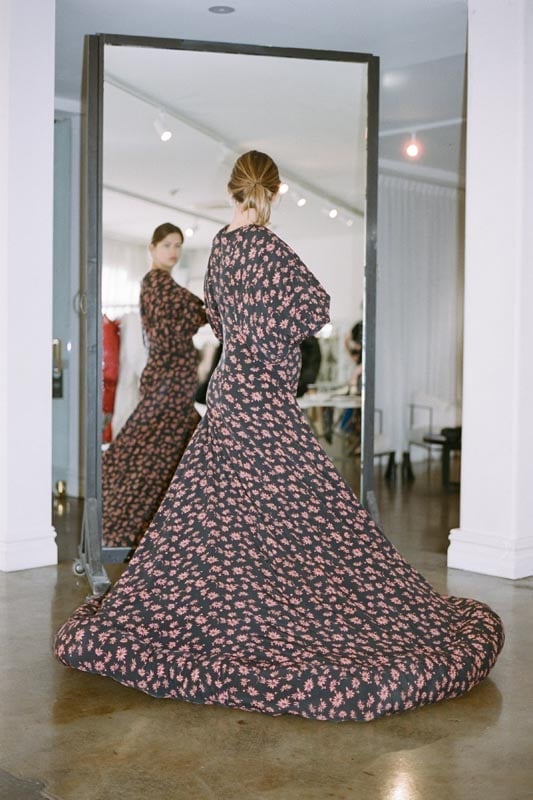 “I had already applied but I am the kind of person who won’t let myself have any expectations even if I knew that making clothes is what I really wanted to do. And there was one particular day when I was just not feeling architecture so I called the university and as you can imagine they must get a lot of calls, so I was transferred about. Then someone came on the line and they were like, “You have a place. Just like that. Which, in hindsight is so CSM because its not very structured there. And the next day I went to talk to my architecture teacher to stop the course and then I moved to London.” 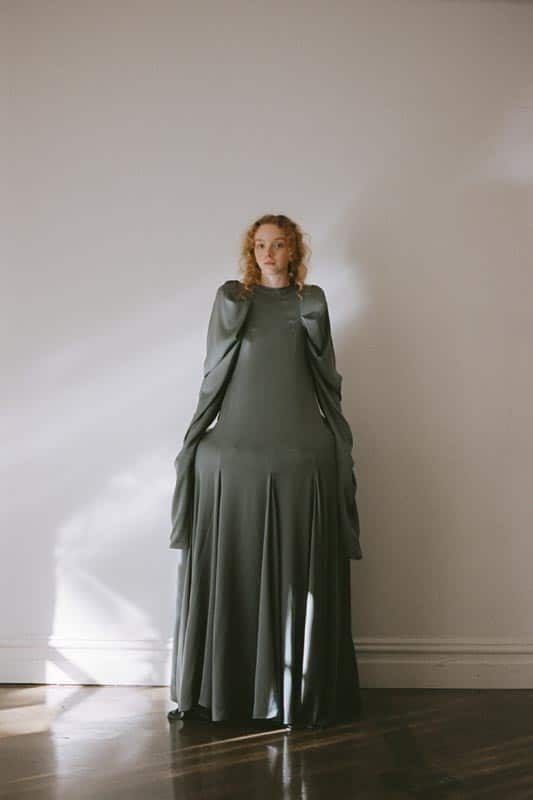 The institution that is Central Saint Martins prepared him for his first job at J.W Anderson before the ultimate move to start his own thing; decidedly brave when as Dalah himself recognises “there are too many brands and too many voices."

“They definitely encourage you if that’s what you want to do. They are very nurturing and they don’t teach you computer software and that’s intentional. The main reason being, you learn on the job. Learning how to be a designer is what you need to tap into. I really liked that because I went into the workplace saying, I don’t know how to do that and so I was able to design. If you know how to do the boring stuff well that’s where they’ll put you.” 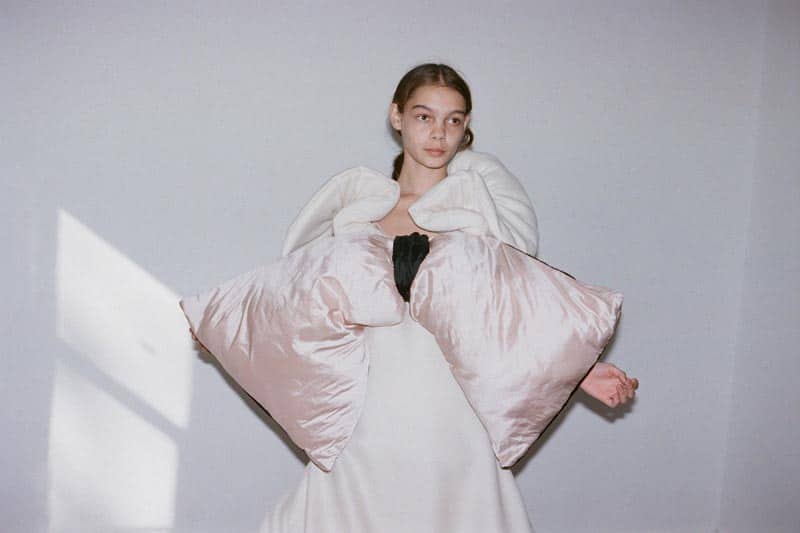 Dalah calls deciding to have his own brand a slow burn. “My stuff… people need to warm up to it. It doesn’t sit with everyone in the same way and that’s exactly how I want it to be. I make the clothes I want to make and some people are like that’s not my thing,” he says. 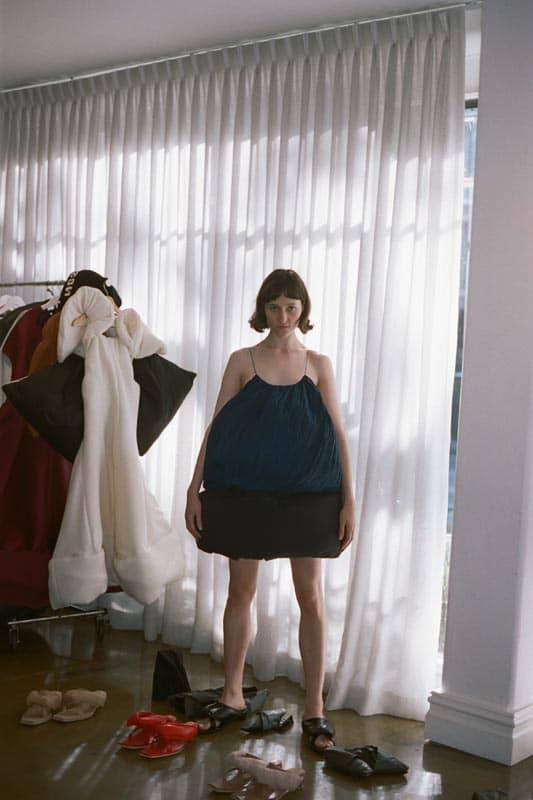 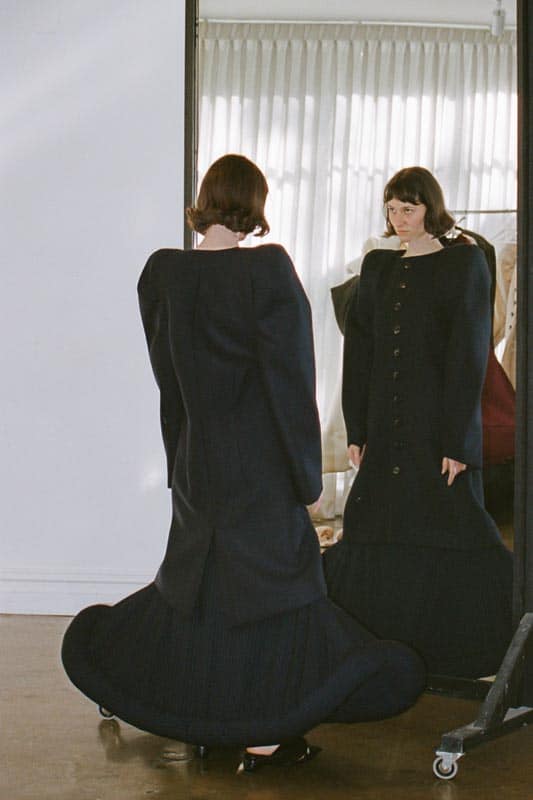 “The Tudor story is something I may always be inspired by, or maybe I will just leave it at the door, but I will not dilute the volume. For me, it can’t be too palatable. It has to be chewed up - I look at costume archives as much as I do historical references - so whatever the shape, it has all my work inside it, which is obviously very costumey but then you see the line and the pocketing is serious. But you know, overall, I’m just following the thing that is authentic.” 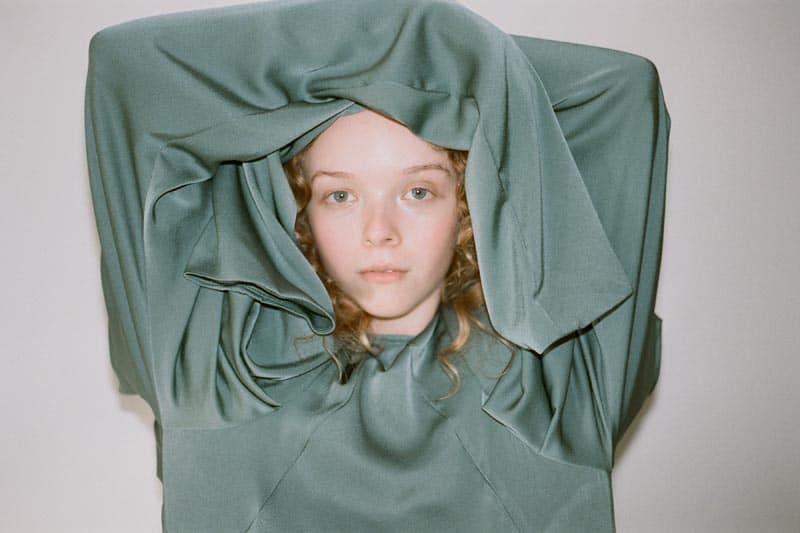 And there it is; clothes not made to sell but most definitely will. Jordan Dalah has arrived.