A date like Friday the 13th is always bound to summon slithers of the occult, but for his Afterpay Australian Fashion Week debut, Alix Higgins throws us into a fully-fledged dystopic future — although there's hope to be found in this barren landscape and it's imparted through collaboration, and most importantly the collection.

Some have painted his clothes as queer clubwear, and an hour spent at Club 77 will explain why, but as Higgins tells me this was never his intention. "I don't see club. I get it and I love going to the club. But queer speaks to me more, although only because I am queer and my brand would always reflect that". 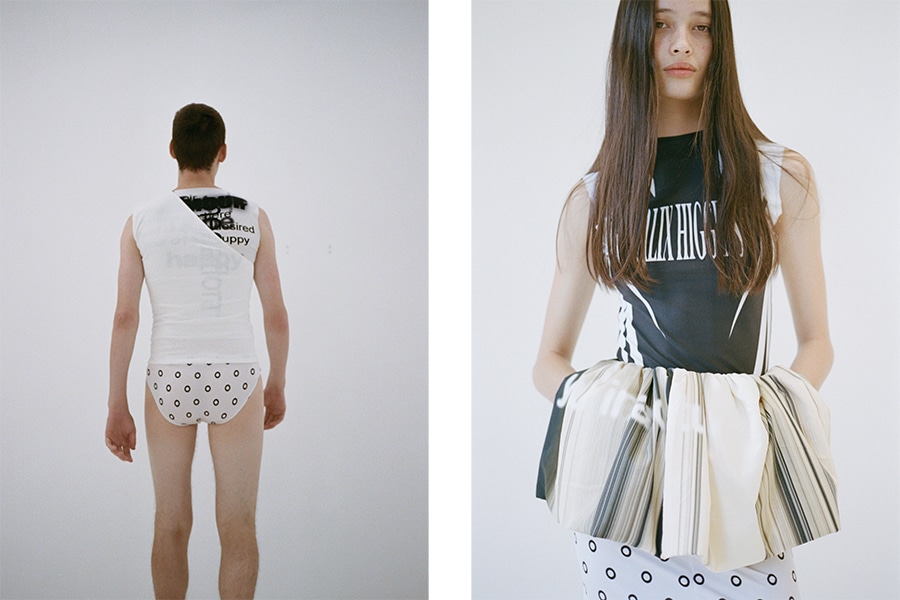 Rather, if Higgins creates with anyone in mind, it would be the late Stella Tennant. Enamored by her "androgynous spirit", the designer frequently collages images of his designs pasted over a photo of Tennant shot by Paolo Roversi. But if Tennant is busy lining the mind of another young creative, it's Higgins friends, along with musicians like Ethel Cain or Grimes he envisions.

When I catch up with Alix Higgins, on a Monday two weeks before his AAFW debut, he's calm. Aside from some hand-sewing and button placements, everything is in order. He's organised he tells me, but as one of the fresher faces on the AAFW lineup, he has to be. Unlike other designers, he's had to hold his fittings three weeks prior to the show, and luckily for us Ellen Virgona tagged along to capture the process as it took place at China Heights Gallery. If anything, this period spent preparing for the show has taught him a lot about project management.

"The collection was actually one of the easier parts because that's what comes more naturally," Higgins says. "But I did really try and challenge myself with that as well to do something bigger and better — more refined." Citing Miuccia Prada as one of a handful of influences, for this collection challenging himself also meant leaning into things that the designer doesn't particularly like. Like beige for example, "which was hard for me," Higgins only half jokes. Ugly chic, baby.

While the designer has certainly taken the collection to new heights, all the hallmarks of Alix Higgins are still present. He's even revisited previous pieces that were created on a smaller scale and injected them with a fresh perspective. Therefore, OG admirers can expect to find garments that hark back to his graduate collection at UTS, or his master's collection at Institut Français de la Mode. Above all, it's a move that cements the brand identity of Alix Higgins which, when tasked with defining it using three words, he describes to me as "poetic, future, freedom".

And yes, you'll find 'future' emblazoned across a long sleeve. 'God" and 'ghost' too. 'Fairy' makes another appearance and so does 'Alix Higgins' the logo, in a big way. As always, and paired with the colour palette, the script is loud and eye-catching. "I grew up on the internet. And I don't have a very strong attention span anymore. A little black dress just doesn't excite me that much." 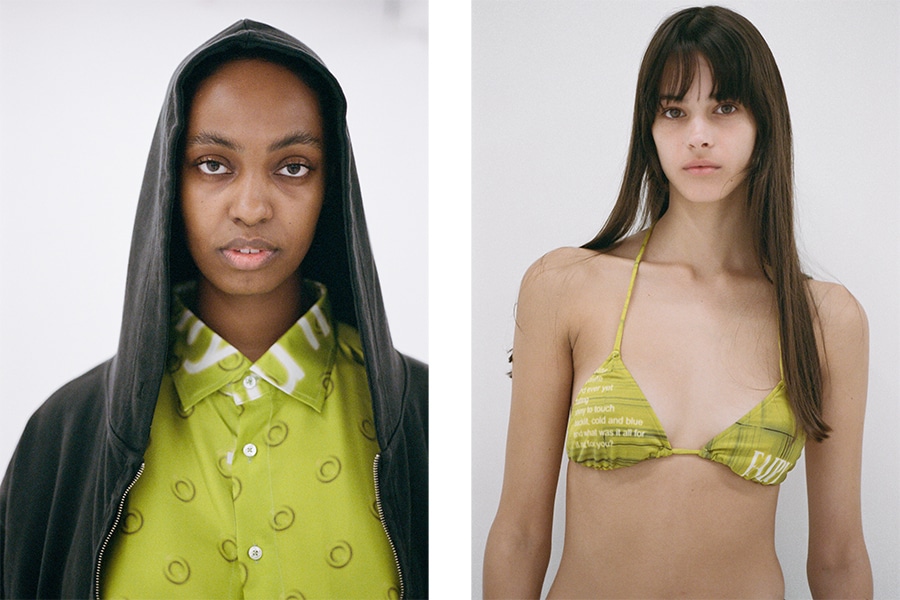 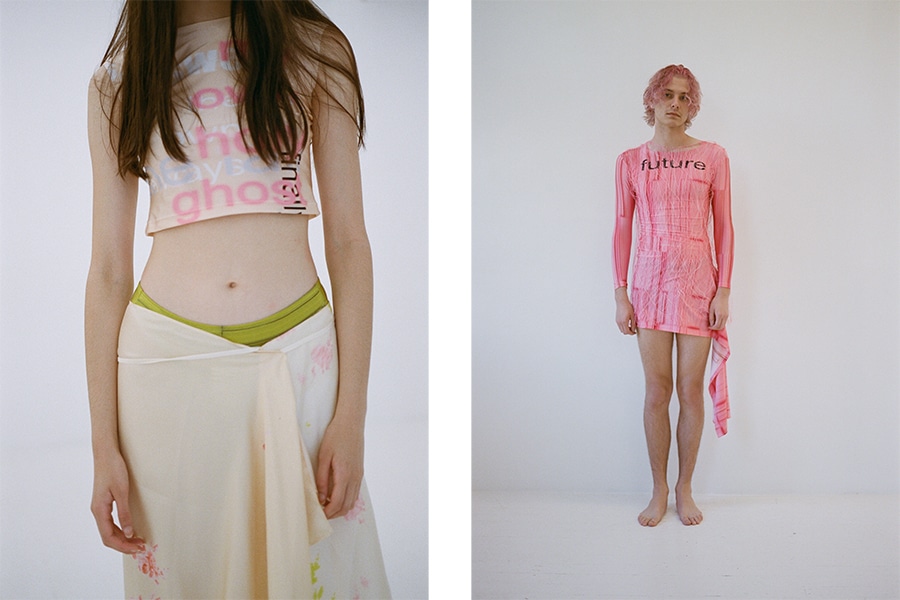 With the scrupulous eye of our Charlotte Agnew in his arsenal, Higgins began to curate A Gift from the Fall. "The prints are very important to me. I feel like if anyone else put this many prints into one collection, it would be a mess. But there is a real coherence." As for those words? They've been around forever. Alix Higgins has been writing for as long as he can remember, although he's much too modest to call it poetry. Especially with how possessive people can be of that word. It began with 'baby', which came about in response to his obsession with how the term, devoid of any true meaning, is tossed around in pop music when speaking of love.

Then for A Gift from the Fall the first word that resonated was 'ghost'. Written on a shirt he had hanging on his bedroom wall, one day the top fell down. "The hanger wasn't broken and the grate wasn't either, and there was no one walking past to push it off". It's safe to say, Friday the 13th is fitting for the collection. The other thing that's fitting is the clothes themselves.

Tank tops and bike shorts hug your figure like a second skin and, while it may not have been his ambition, it's easy to see how Alix Higgins has become synonymous with the club, rendering even the most unseen bodies visible and becoming, albeit unintentionally, its own form of protest. "The form-fitting mostly came from thinking about the body as an image. Just wanting to project an image onto the simplest forms and the form closest to everyone," he explains.

So where does one start when dreaming up a collection? For Higgins, it always begins at the same place: introspection. As an eponymous brand, this should come as no surprise, but there was a moment when A Gift from the Fall could have been a homage to The Little Mermaid after Higgins was briefly convinced that it needed a traditional "theme". He soon scrapped this, instead leaning into a stretch of time where he was feeling "particularly emotionally volatile".

"I'm very emotional and for a time it felt like I was falling, or in movement. But it's essentially looking at the negative in that situation and seeing it as a gift", and thus A Gift from the Fall was born. 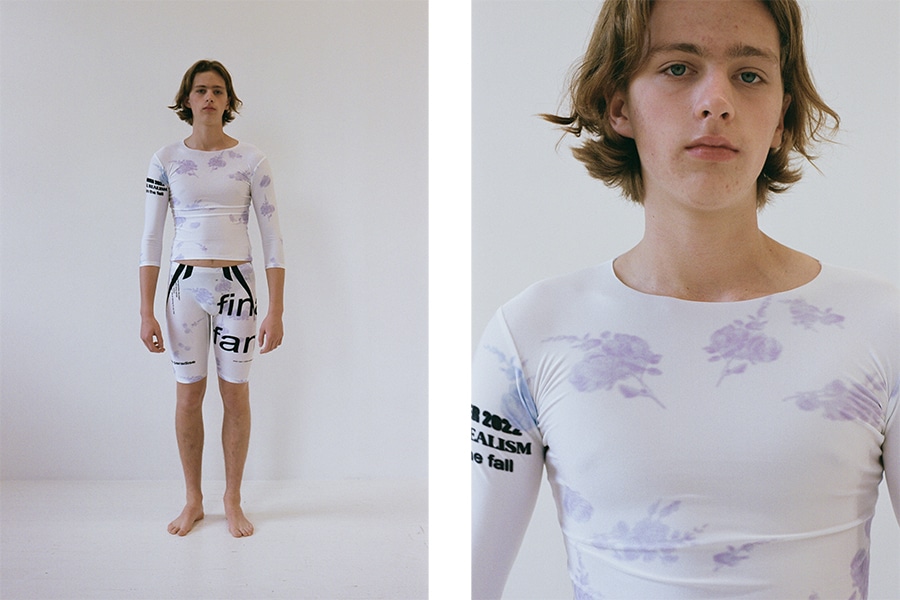 This morning we saw the elbow grease from January pay off. A desert landscape stretched before us, and models (though not all in the traditional sense) were sent down the runway like pilgrims, soiled and weary. Nina Treffkorn of China Heights Gallery, and her son Max Snelling crossed paths, as did Atty Mitchell, Holly Brown, Elliot Cowen, Reem Elnour, Gemma Cowling and Amy Crookes.

"As I'm growing and my brand is growing and I'm feeling more visible, but also scrutinised, I felt the need to do something a little bit harder. And so it was this vision of my friends and my muses and my brand going out into the world through this desert wasteland," Higgins shares.

"But it's a desert highway. So there's remnants of the world, but it's a future. So the colours are more faded. And there's harder graphic prints. There's also other textiles like handmade lace, which is covered in found feathers that my friend found in the bush." The effect of the lace makes the clothes appear to be disintegrating in front of you, almost like a video game that hasn't completely loaded and paired with the gradual accumulation of feathers, "it sort of looks a bit like someone's been walking forever on this odyssey."

It's a comforting sentiment and with collaboration at the heart of A Gift from the Fall, it's a case of art imitating life. The show, when broke down, is a celebration. The grand finale showcasing the triumphant combined efforts of a community Alix Higgins has found himself in the midst of.

"I started writing a short programme and it sounds like an Oscars speech. There's so many 'thank yous'". Mentioned in the speech are the folks behind printing studio Think Positive and Higgin's tutors at UTS. Plus, a handful from his circle of creative friends like Joan Benoit who directed the music, show producer Zoe Davidson and RUSSH Fashion Editor Charlotte Agnew, who was enlisted as the show's stylist. 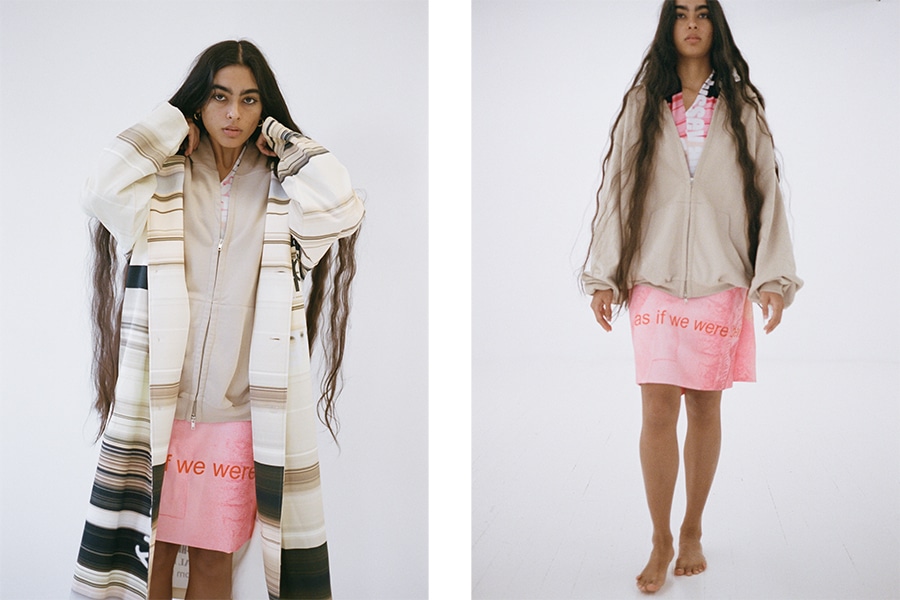 "Charlotte and I keep talking about this feeling of magic and fashion," he says. "That fashion is something that you can't quite explain or teach. It's an emotion, almost. But that being said, we both are quite practical. And my brand is very commercial — there will always be a t-shirt and baggy shorts on the runway. I think fashion does have to sit on that fine line between a really magical thing, but a real thing that people can access and interpret and incorporate into their wardrobe and everyday life. I think Charlotte's really great at imbuing the right amount of magic. Things never feel too extreme or too costume."

The past two years have certainly been a fall, but if we're to do as Alix Higgins does and transform our turmoil into treasure, then the takeaway is this: we've found our gift this fashion week and it's nylon, beige and Higgins all over.