Arts-Matter, the new Sydney-based cultural programming platform co-founded by Michelle Grey and Susan Armstrong, recently hosted a conversation with multi-disciplinary artists Ramesh Mario Nithiyendran and Angela Tiatia (both represented by Sullivan & Strumph) – currently on view at the Art Gallery of NSW until the end of Feb.

Tiatia’s work explores contemporary culture, drawing attention to its relationship to representation, gender, neo-colonialism and the commodification of the body and place, often through the lenses of history and popular culture. Also drawn to narratives that encompass similar socio-political themes, Nithiyendran creates rough-edged, vibrant, new-age sculptural idols. He experiments with form and scale in the context of figurative forms to explore politics of sex, the monument, gender and religion.

For the entrance to the AGNSW Nithiyendran created more than 70 sculptures of guardian and protector figures in bronze and clay, their polymorphous bodies embellished with luscious glazes in super-charged colours. Inspired in part by the Gallery’s Asian art collections, Avatar Towers combines humour with reverence, the spiritual and the sensual. 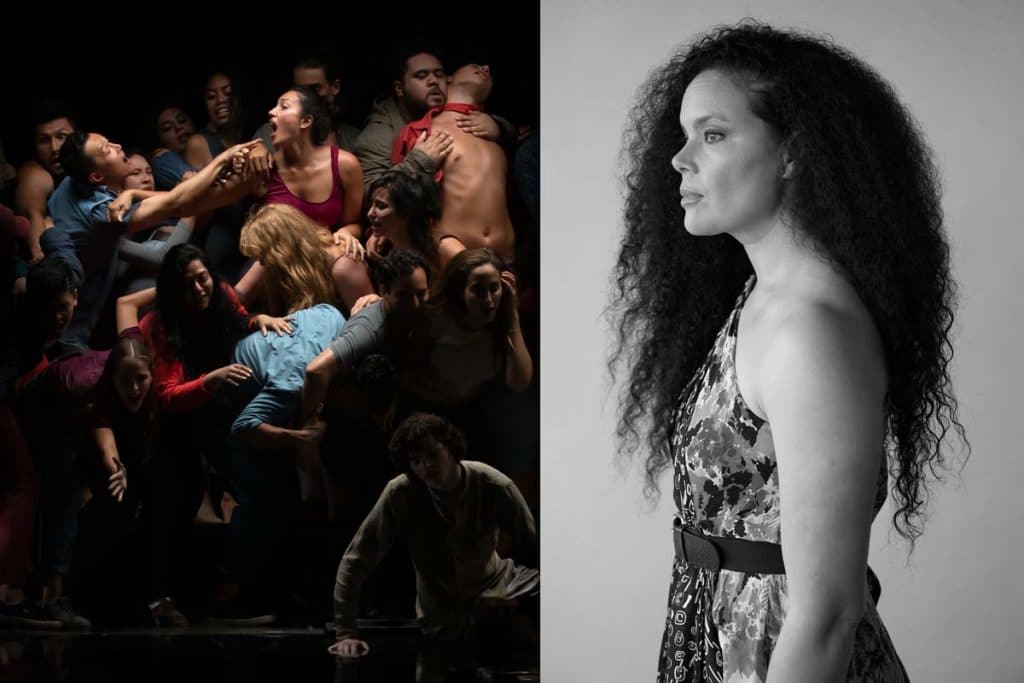 The figures in Angela Tiatia’s monumental AGNSW photo mural “The Golden Hour” (referring to the transitory moment in which day slips into night) are characters embroiled in an epic drama. The stage on which their story unfolds is a fictive landscape; part hyperreal dreamscape, part secluded coast. They fight, they cry, they flee imperceptible threats. 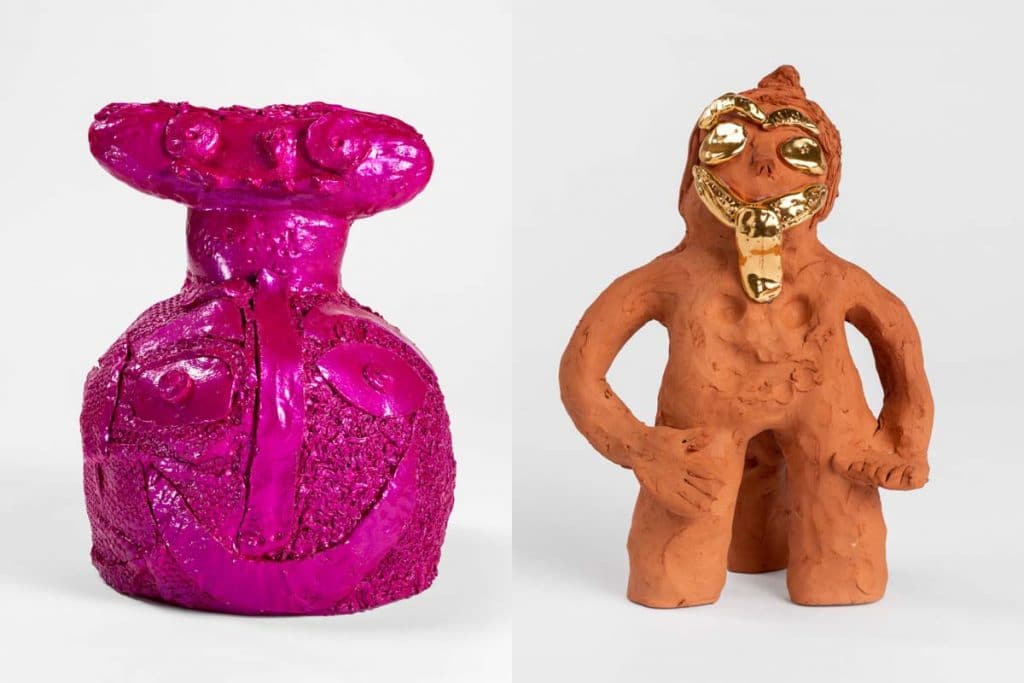 Selected images of individual works included in the 'Avatar Towers' at the Art Gallery of New South Wales.

In front of an audience comprised of creatives and art-enthusiasts, the duo discussed their process and practice, themes in their work, and the role of representation in the arts.

Tiatia began the evening by speaking about her Samoan, Chinese, and Irish Australian background, and how she grew up making things in nature. Discouraged from being an artist at an early age, and told to wear a short skirt and heels, she felt like she was being pushed into becoming a secretary – but instead she donned a short skirt and heels and ended up becoming a model. However, "I didn't like being a model, continually being objectified and not being able to control the narrative,” she explained, and quickly began her journey into becoming an artist. 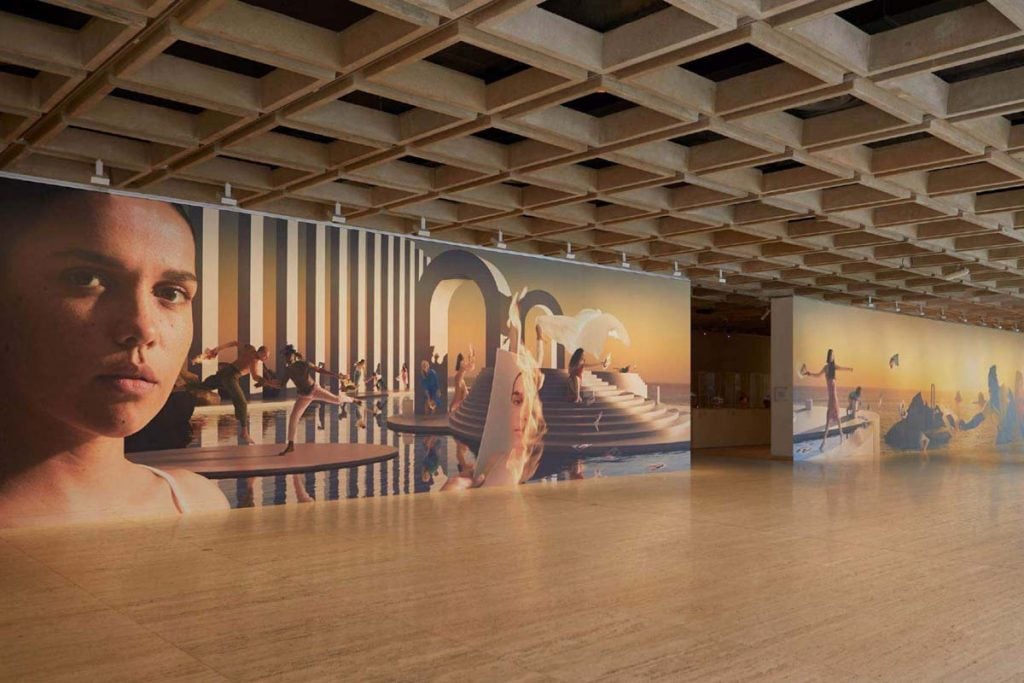 Ramesh, who immigrated to Australia from Sri Lanka at the age of one, also liked to make things and grew up in a super structured environment. "Art wasn't embedded in our lives, I had to make a decision and seek out these experiences. The primary thing for me is that I don't think I could do anything else,” he explained.

The conversation also touched on each artist’s feelings about representation. Nithiyendran explained that people of colour and people who believe in social justice from minority groups always feel like they are representing people beyond themselves. “It's a kind of experience that people of privilege don't have to do," he said. Tiatia explained that growing up modelling in the 90s she was constantly talking about representation. “I quickly learned I was the one called in to add a bit of flavour. This is where my practice in terms of representation started – I was always advocating for a truer representation of the world we live in,” she said. 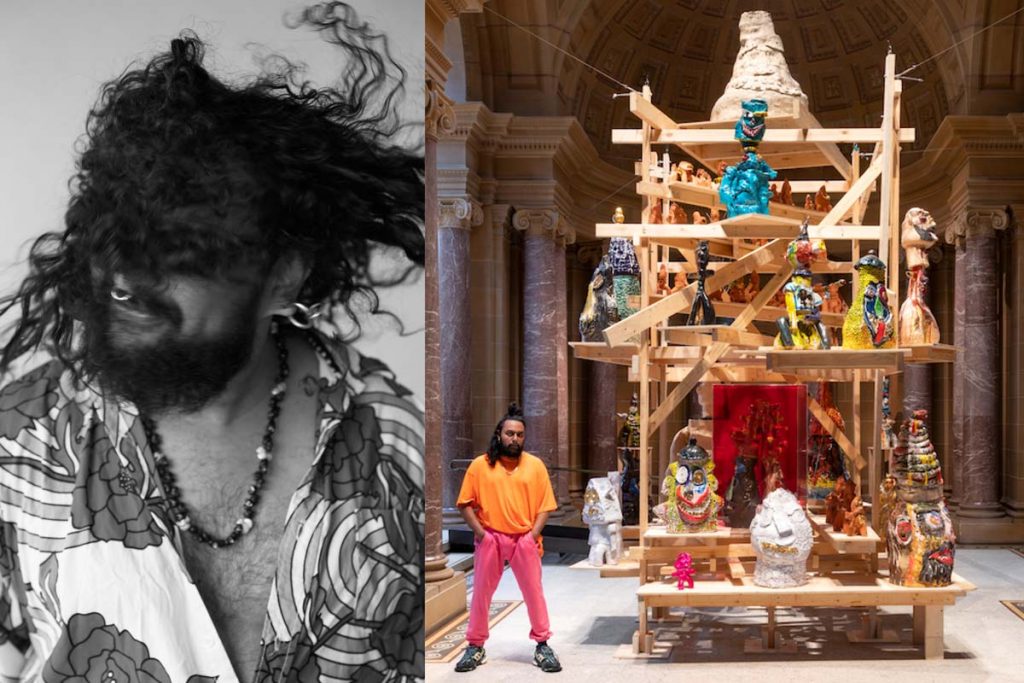 “There's an expectation that artists are morally upstanding. Putting work out for public consumption we need to expect some kind of criticism. To me talent is somewhat elusive but for most artists it's about a process of labour and putting in the time,” said Nithiyendran. Even though he’s best known for his sculptural creations, Nithiyendran actually began his artistic journey as a painter. “I've always found painting to be quite hard. Looking at an empty canvas I felt overwhelmed with the history of painting…moving into a sculptural practice I felt I could engage in real life and what was around me a lot easier,” he said. When asked how he’d like people to experience his work, Nithiyendran responded “pragmatically, anything beyond apathy.”

Titatia ended the evening by discussing de-colonization, which she says is a deep practice that is often hidden in this modern era. “For me, it's about bringing to the fore all the things in our daily practice that has been halted due to colonisation. It's an activist practice. It's about being seen through the eyes of our own culture rather than western culture.”

PREVIOUS
Ruth Bader Ginsburg immortalised – a new documentary on the justice's life, work and legacy is coming
NEXT
Danny Boyle is bringing us a TV show based on the Sex Pistols

Watch the trailer for the docuseries here.

Almost four years on since Tom Petty tragically died from an accidental drug overdose, this new documentary is what his fans have been waiting for.